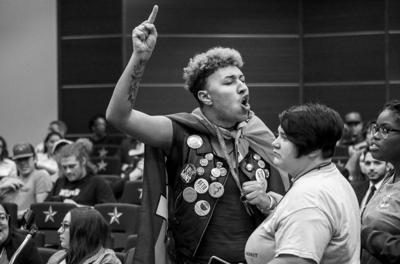 Editor’s Note: For the remainder of the school year, The University Star will take on “The 11% Project”, an examination of Black students at Texas State through History, Election, Hometowns, Activism, Creatives, Mentorship and 10 years from now. This letter highlights how we got here and what we hope to accomplish with it.

I tried my best to recall my experiences at Texas State and The University Star when I applied for the Poynter Institute’s College Media Project, a year-long program advancing student media through training, workshops and collaboration, all centered on enhancing community engagement.

Texas State was going through a rough time when I arrived in fall 2017. We were a year removed from the biggest election of our lifetimes (at the time), white supremacist propaganda floated around campus and relations between the administration and student activists were not in a good place.

The same semester, the news organization I would later end up committing to for three years received death threats from community members, a demoralizing condemnation from the university president and calls for defunding, following a published controversial column attacking the concept of whiteness.

Fast forward to the night in April this year when my adrenaline rushed and fingers galloped, working to beat Poynter’s 11:59 p.m. application deadline. I wanted to convey everything that happened on campus since I enrolled and why it made The Star qualified to take part in the project. I experienced two student sit-ins on campus. I helped cover a massive protest that stemmed from a group, who some thought to be associated with white supremacy, stating it would arrive on campus. Students were arrested.

At The Star, we had our own battles. Prior to me, we only had one official Black editor-in-chief (we’ve been around since 1911). There were very few Black staff members around. It was evident in the conversations I had with white members.

Weeks later, we were chosen as one of 10 newsrooms for the project, and I was ecstatic. The next challenge was figuring out what our community engagement project would be.

After months of Zoom meetings, training, agreements/disagreements and more, we were intrigued by a certain statistic: 11%. There is currently a strong Hispanic and white presence on campus, but the 11% of Black students, at least from our view, was often forgotten. Black students are present, but oftentimes their voices and contributions are disregarded. We decided it was our duty, as the student-run news publication of this community, to change that narrative.

So from now until the conclusion of this school year, The Star will take on The 11% Project, an examination of Black students at Texas State through History, Election, Hometowns, Activism, Creatives, Mentorship and 10 years from now.

Each month we will examine a theme in relation to the 11%. You will see timelines, stories, multimedia, design, an official event and more across all our platforms. We will examine Black trial and triumph. We will be seeking the stories of Black students, untold and unheard before.

This project aims to bring us all together and educate non-Black students, faculty, staff and community members. We want all groups, ourselves included, to get to know the 11% and what it offers to this community — why it makes this community so great. Everybody talks about how they want change, but very few put in the work to bring it to fruition.

The Star has always talked about how it wants to uphold an inclusive culture and connect with this community. I think this will be another step in the right direction for us.

We’re nervous about taking on such an important project, but we understand it is much bigger than us. We’re impatient; we want to get it right. We feel there is a lot at stake. We hope you will join us on this journey.

This letter is just the start.