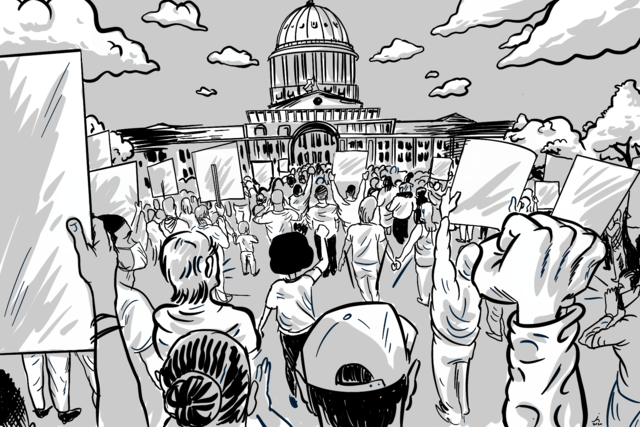 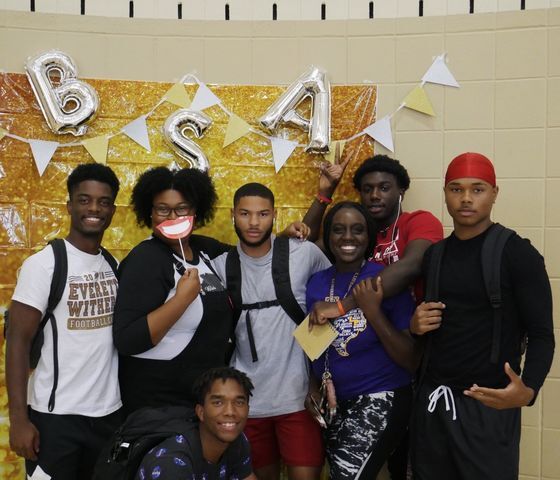 Complete with sparkles and decorations, members of the Black Student Alliance celebrate the beginning of the fall 2019 semester at the Student Recreation Center. (Courtesy of Destiny Whitaker)

Protests have taken place across the nation following the killings of Breonna Taylor and George Floyd at the hands of police, with people speaking out against America’s racist roots and demanding justice for the murders of countless Black people.

At the forefront of the protests is the Black Lives Matter movement, established in 2013 after the murder of Trayvon Martin and acquittal of George Zimmerman. Dedicated to bringing awareness to and addressing the racial injustice directed toward the Black community, the movement has gleaned more support from outside communities following the recent killings of Taylor and Floyd—bringing into question the meaning of allyship to social justice movements.

Former president and current senior adviser of Texas State’s Black Student Alliance Destiny Whitaker said in order for meaningful change to take place, it is important for activists and individuals outside of the Black community to support the Black Lives Matter movement. She said it ensures the movement is long-term and its message reaches all communities.

“When it comes to allyship, people [are] more likely to listen to someone who looks like them about an issue rather than someone who looks like me (Black),” Whitaker said. “People really underestimate the power of their voices; [allyship] means empathizing but knowing you won’t be able to share the same experience as someone who is actually Black because there is never going to be a day where you have to wake up and [live] with those issues.”

Whitaker said some people may be hesitant to voice their opinions or show their support because of a few common misconceptions surrounding the movement. She said oftentimes people associate it with violence and riots but do not educate themselves on why Black people are risking their lives to take a stand against racial injustice.

“If [an individual] believes [racial injustice] is wrong, which it clearly is, it’s [her or his] job to stand up and support the creation of change,” Whitaker said. “Just like with any other movement, there is right and wrong, and it is your duty as a human being to stand up for what is right.”

To become an ally to Black Lives Matter or any movement for social justice, research and education are recommended before trying to start conversations; some individuals will have to go as far as deconstructing what they were taught throughout their childhood.

Robert Garcia is the assistant director of the Diversity and Inclusion office where he focuses on services directed to help LGBTQIA+ students and implement programs centered around social justice issues such as racism. Garcia said for an individual to truly become an ally to any movement for social justice, it takes research and evaluation of one’s privileges overlooked in everyday life.

“If I am not being an ally for the rights of the Black community and those individuals, what can I expect for myself as a person also of color (non-Black) and as a person who also identifies [outside of the] heteronormative cis-gender identity realms,” Garcia said.

He said once an individual has educated themselves and is prepared to have conservations, it is important to remember the importance of vulnerability and openness to learning new information.

Dr. Dana Fitzpatrick is a student development specialist with the Diversity and Inclusion office who focuses on Black student retention.

Fitzpatrick said allyship to the Black Lives Matter movement is determined by actions and not words—buying from Black-owned businesses, donating to Black student organizations, signing petitions and speaking up against racial injustice.

“Advocate for Black people to sit on boards or leadership teams,” Fitzpatrick said. “If you’re sitting around and only see white faces; ask [why they are not represented]. I can promise you there are some Black people who are just as qualified if not more qualified [for] those positions.”

She said if people outside of the Black community don’t stand together in support of Black Lives Matter, law enforcement will continue oppressing Black people.

“We all have to live in this world together,” Fitzpatrick said. “We have to learn how to co-exist. If you’re choosing to be silent, you’re choosing the side of the oppressor. To say ‘it doesn’t affect me; I don’t care; the police aren’t pulling me over [or] they aren’t killing anyone in my family’—to say that is negligent.”

In the digital age, some individuals take part in the Black Lives Matter movement for reasons the Black community deems wrong—self-promotion or fear of ‘cancellation’, making it difficult to see who is truly an ally.

Some believe allyship is a difficult concept to comprehend when trying to weigh the impact on a movement; especially if people are performative with the movement’s true purpose.

“I feel like allies do have a lot of power,“ said Gabby Grant, president of Interruptions, a multi-racial, anti-racism peer educator group at Texas State. “However, I feel like allyship is dangerous when it becomes the [main] purpose or focus of a movement because it’s taking away from the things that actually need to be talked about or the actual people that have been oppressed.”

Grant said for real change to take place, it takes more than advocating in front of a camera or posting it to social media. She said change starts from behind the scenes—reading books on Black history and holding friends and family accountable for their words and actions.

“Allyship shouldn’t be something that you’re able to just take off and choose when you can do it and when you can’t,” Grant said. “We need allies to be on the clock full-time.”

Emmy-winning ABC News veteran and host of "What Would You Do?" John Quiñones has been announced as Common Experience’s featured speaker for the virtual LBJ Distinguished Lecture Series event.

Opinion: Getting the flu vaccine is essential right now

Despite how common respiratory viruses are, they pose a severe health risk. Never has that been more apparent to the general public than this year, as the U.S.—and the world—continues to reel from the effects of the COVID-19 pandemic.