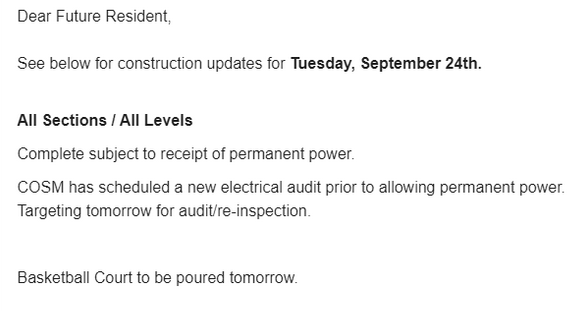 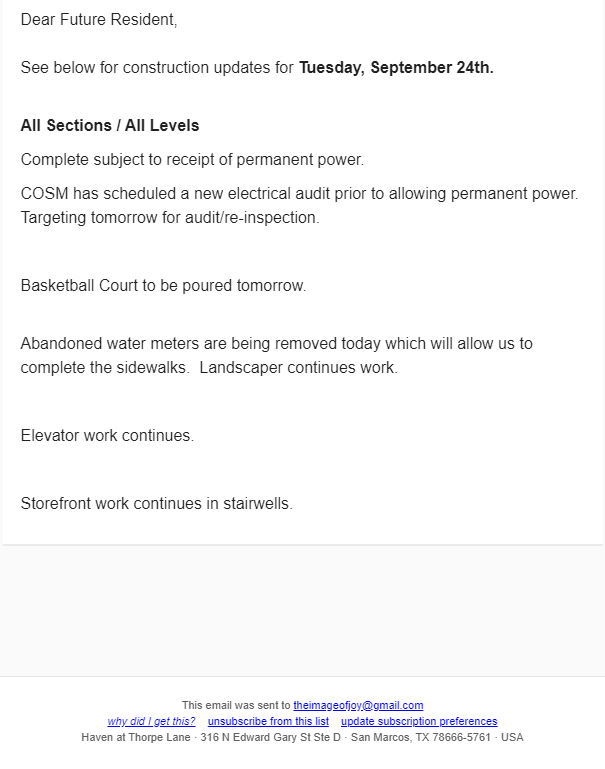 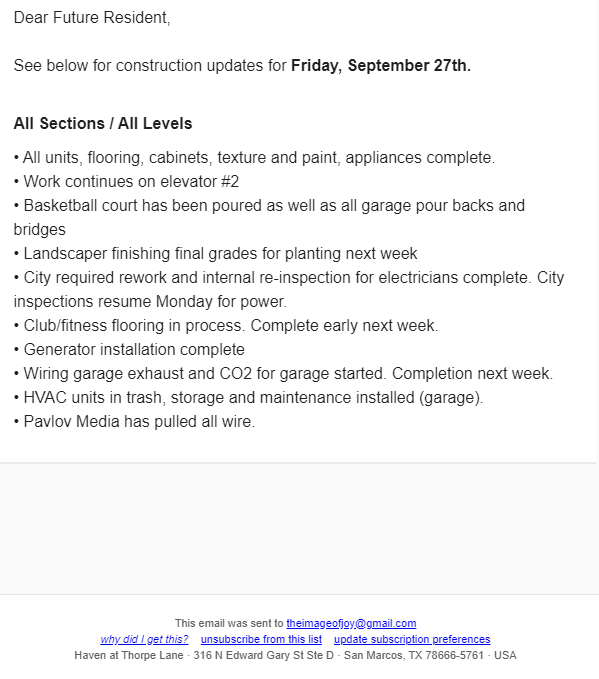 Haven on Thorpe Lane has again extended move-in to within 30 days from the previous Sept. 16 date due to construction delays but has yet to send out an official day.

The building, located at 1351 Thorpe Lane, still does not appear complete; sidewalks are not finished and trash can be seen on several balconies.

After attempting to reach out to Mark Evans, director of public relations for Haven, The University Star was refused an interview and given the following statement:

“We know the delays at The Haven at Thorpe have caused a tremendous inconvenience for residents, and we apologize for that. We are in constant contact with the developer about the status of construction in order to pass along any new information to residents as soon as we receive it.

As soon as the management team was informed of the latest delay by the developer, we notified residents and extended them an additional month of free rent. As of right now, residents have four to six months of free rent, depending on whether they chose to make their own living arrangements in the interim or allow us to temporarily place them at another property.

In the meantime, we continue to send residents twice-a-week emails with the latest information on the status of the property. We look forward to welcoming them to their new homes next month.”

Imogene Daily, theatre sophomore, said she is not surprised Haven management pushed the move-in date again, but thinks residents will be able to move in soon.

“I think people are acting out of anger and frustration instead of logic,” Daily said. “While (Haven) may be a money grab or marketing ploy or something like that, there are people who genuinely believed the project would be done and I don’t think that should be a predetermined idea of how the complex itself will be once it’s finished.”

Daily has been housed at The Junction and living rent-free courtesy of Haven.

Other students, like Blake Brewen, computer information systems junior, chose the option to select his own temporary housing and is sub-leasing at The Woods.

Brewen said he has been calling the Haven office for updates often and has yet to be given any concrete information.

“It’s a situation where lots of kids are being taken advantage of,” -Blake Brewen

“It’s a situation where lots of kids are being taken advantage of,” Brewen said. “There’s a whole lot of people who are a lot less savvy than you and I. What type of business model is it that you’re opening up a brand new housing complex and you have every single one of your tenants living elsewhere for half of an entire year?”

As of Friday, Sept. 27, Haven management sent out an email stating, “all units, flooring, cabinets, texture and paint, appliances complete.” Future tenants are still receiving updates via email. Option one—residents who chose their own temporary housing—are receiving increased waived rent from five to six months and option two—those who are living in temporary housing chosen by Haven—increased waived rent from three to four months.

Update: Sept. 25, 6:52 a.m. Pendergrass’s vehicle was located and recovered by law enforcement at the Walmart parking lot in Lockhart but Pendergrass has still not been located. Original Story The Hays County Sheriff’s Office is searching for Tyler Joseph Pendergrass, a suicidal person last seen in San Marcos. Pendergrass, 35, was last seen leaving…

The City of San Marcos emergency responders responded to a crash Sept. 24 involving two planes at the San Marcos Regional Airport. A tweet from the city asks citizens to avoid the area and states the Texas Department of Public Safety and National Transportation Safety Board will release further information. Officers at the scene report…

Texas State’s COVID-19 dashboard added 10 new student cases and one new faculty/staff case Sept. 24. According to the dashboard, 133 cases are considered active. A total of 404 students and six faculty/staff have tested positive for COVID-19 in the past 30 days. The dashboard states that numbers include positive COVID-19 test results for students, faculty…

The Hays County Local Health Department recently received reports of 160 additional COVID-19 hospitalizations that were not previously provided for daily reports. The new total number of hospitalizations in the county is 341. According to a press release, after an internal audit the health department confirmed that 160 patients who tested positive for COVID-19 were…