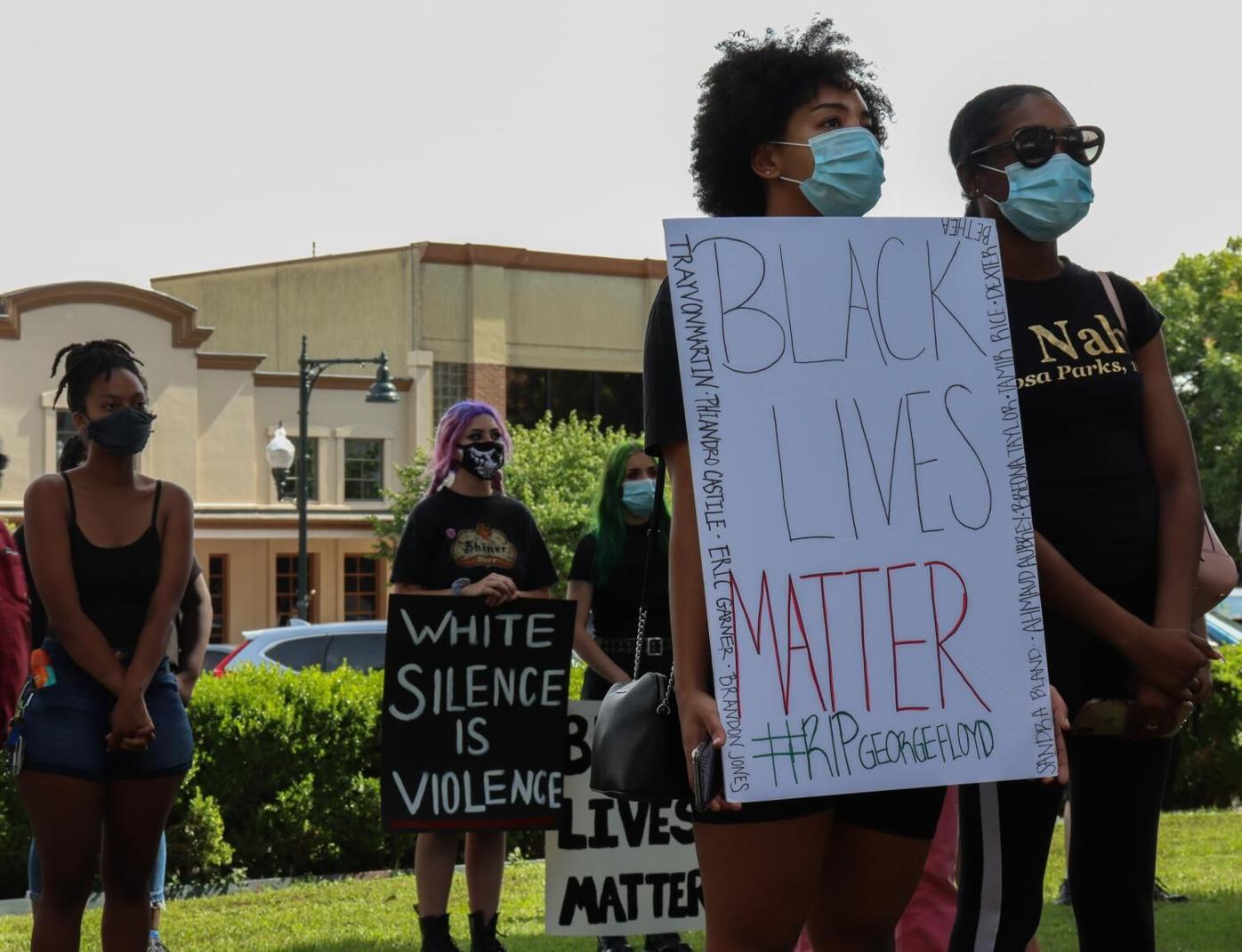 A crowd gathered around the Hays County Courthouse with signs and listened as speakers opened the gathering, Friday, May 29, 2020, at the organized protest for justice for George Floyd and Breonna Taylor in San Marcos. 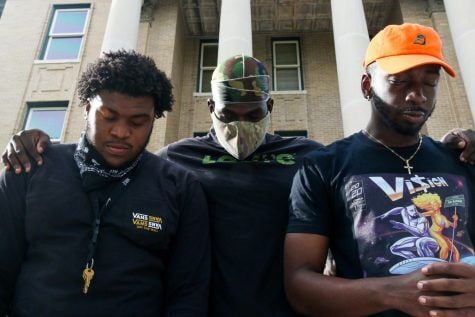 (Left to right) Diereck Montes, Ayo Ade and Micah Traylor bow their heads in prayer, Friday, May 29, 2020, at the Hays County Historic Courthouse. The three led a protest for George Floyd and Breonna Taylor. Jaden Edison

Texas State students are amplifying their voices within their communities to end the killings of innocent Black people at the hands of police and support the Black Lives Matter movement.

The deaths of George Floyd and Breonna Taylor have sparked outrage on social media, and students, such as Diereck Montes, business marketing junior and Hip-Hop Congress events chair, have decided to use their platforms to help create change.

As a Black male, Montes said George Floyd’s death hit home for him and made him realize how important it is not to stay silent when injustice is alive.

In less than two days, Montes spoke with the City of San Marcos, called his friends and took to social media to bring in over 200 people to downtown San Marcos May 29 to peacefully protest and give Black voices a platform to be heard.

“People love our culture,” Montes said. “They love Hip-Hop; they love all these different things about our culture, but they don’t accept us as people.”

Similar to Montes, Don Thomas, general studies senior, understands how Black culture is appropriated but not appreciated. With the use of social media, Thomas began advocating for change.

On Instagram, Thomas posted a series of hashtags to help spread his message, shared compelling posts through Instagram Stories and also linked resources on how to help the Black Lives Matter movement in his bio.

As a Black male himself, Thomas said racism should not be a question, and it is important to speak up when things are wrong. He calls out those who use the Black Lives Matter movement as a trend instead of using it as an everyday ideology; he advises anyone wanting to support the movement to do it for genuine reasons.

“Stay adamant about the cause because it’s not something that is just trending,” Thomas said. “Black culture may be a trendy thing for the nation, but Black lives aren’t that same stature.”

Some students feel the lack of education on Black history might be the root of the miscommunication and mistreatment of Black lives. Idalmis Ortega, exercise and sports science senior, said she first learned about the oppression the Black community faces from the Netflix documentary LA 92.

Ortega compared the documentary to today’s Black Lives Matter movement since it highlights the LA riots that occurred after police officers were filmed beating Rodney King in 1991.

She also took inspiration from the Common Experience book she read during her freshman year, “Just Mercy”. The book tells the story of Bryan Stevenson, a lawyer who represented Walter McMillian, a death row inmate in the 1980s wrongfully convicted of killing a white woman in Alabama. Ortega said the book opened her eyes to the unfairness of the justice system and how the Black community is treated unfairly.

Ever since the murder of Ahmaud Arbery, an unarmed black man who was shot and killed by three men while jogging in Georgia, Ortega, a light complexion Latina, began using her platform to spread awareness on racial injustices.

“It’s true what everybody is saying, because you have that privilege, and [Black] problems aren’t your problems, [so] obviously you’re not going to care,” Ortega said. “But once you’re able to empathize with our Black brothers and sisters [and] their situations, then that’s kind of where it starts.”

Ifeoluwa Cole, a Black nursing sophomore, and her friend Jorge Jamaica took to the streets of downtown San Antonio May 26 to protest the death of George Floyd. Cole said she was moved and inspired by the speeches she heard from fellow activists as well as the individuals she protested with.

“There were two speakers—one was [a 17-year-old] African-American and you can see the passion she had when she spoke, and the other was a guy who talked about the system,” Cole said. “You could also see his rage and how he was feeling; it was all very powerful.”

While many people are joining the Black Lives Matter movement and using it as a way to enlighten others and speak up against racial injustice, Jayda Ennis, music studies sophomore, is using her voice in a different way.

The Virginia-native received an opportunity to sing at Our Lady of the Lake’s Prayer for Solidarity service in San Antonio. As a Black woman, Ennis said the purpose of the service was to unite the community while promoting peace among each other especially during protests.

Ennis sang “I Want Jesus to Walk With Me” to honor George Floyd and other Black people who lost their lives to police brutality.

“African Americans are dying at a disproportional rate at the hands of police violence,” Ennis said. “It’s a human rights issue, and everyone should care.”

Ennis said now is the time to help, and even during the COVID-19 pandemic, there are opportunities for individuals to take a stand with the Black community.

“For the people that are home, if you are financially able to, keep donating because your city [sees] petitions, and they definitely matter,” Ennis said. “And to the people who are protesting, try as hard as you can to remain peaceful, because peace is the only way that things are going to get solved.”

Correction: An earlier version of this story said Don Thomas was a junior instead of a senior. We apologize for this error and have since corrected it.

The San Marcos Police Department responded to an incident downtown Oct. 27, resulting in the arrests of two men.

The Hays County Health Department reports 13 new lab-confirmed cases of COVID-19 and 37 recoveries Oct. 30, bringing the total number of cases in the county to 6,132 and recoveries to 5,722. The total active cases in the last 21 days is 393.

The Hays County Sheriff's Office's investigation into possible illicit activity at a San Marcos spa led to an arrest made Oct. 29. for Trafficking of Persons.