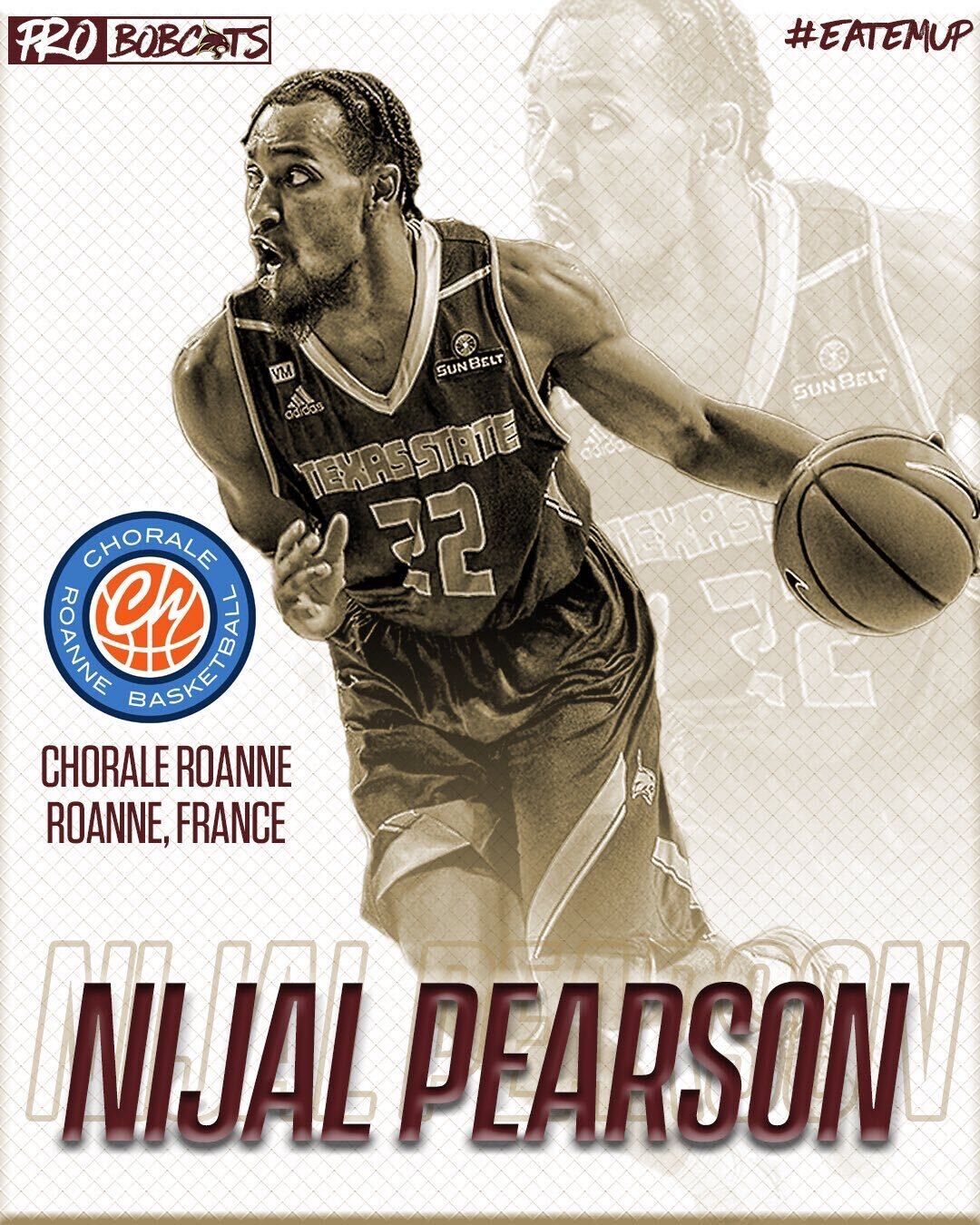 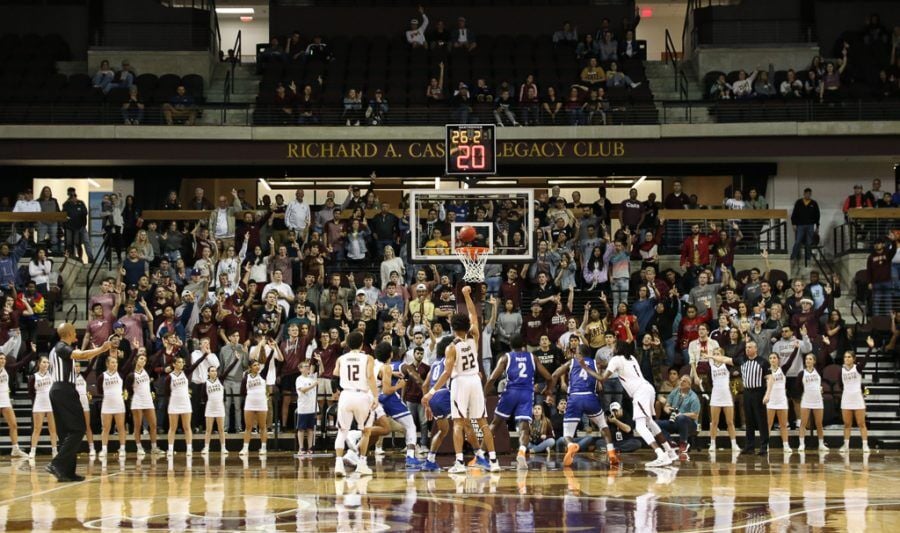 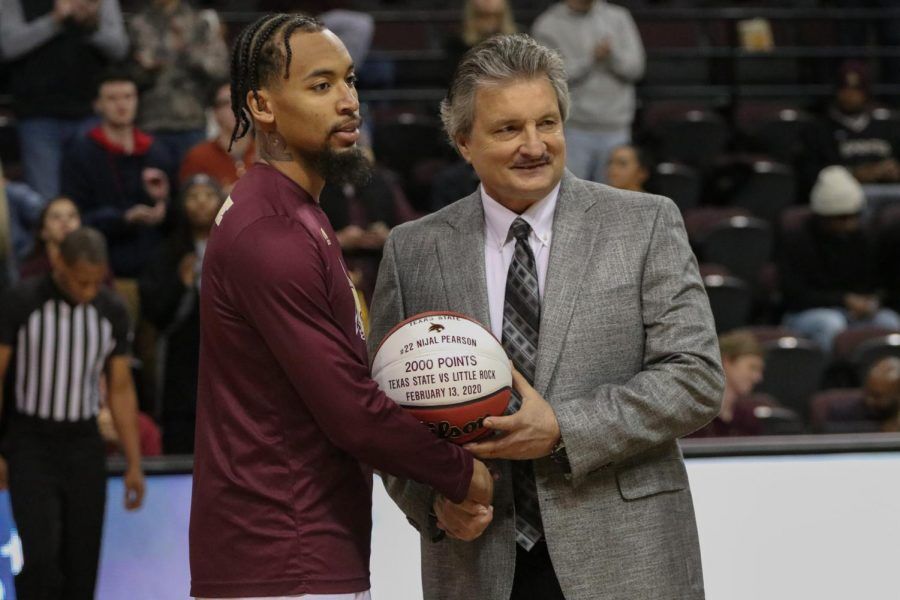 Texas State senior guard Nijal Pearson and Head Coach Danny Kaspar pose for a photo while Pearson is presented with a game ball to commemorate him scoring 2000 points, before a game against Georgia Southern, Thursday, Feb. 20, 2020, at Strahan Coliseum. (Kate Connors) 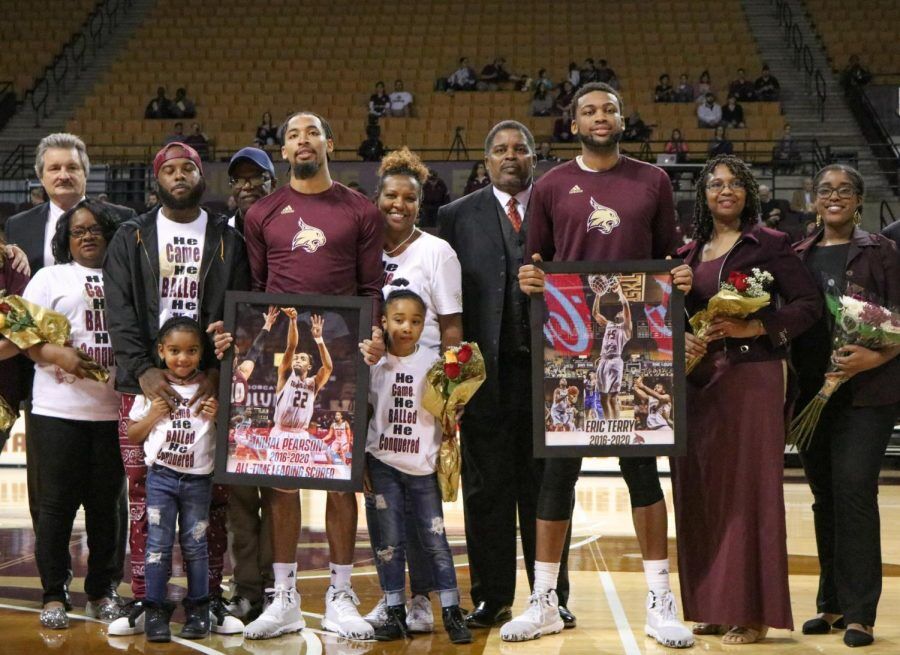 Texas State men’s basketball alumnus Nijal Pearson never traveled outside of the U.S. Now, Pearson is not only moving abroad but also fulfilling his lifelong dream, a bittersweet feeling as he reaches professional status but also moves away from the place he calls home.

Pearson will begin his professional career in France with Chorale Roanne, a member of France’s premier professional league, before the LNB Pro A league begins in September.

This past season, he broke Texas State’s all-time scoring record with 2,122 career points and was the first Bobcat in 41 years honored as an All-American. By going pro, he accomplishes a goal most collegiate athletes imagine doing but often fall short of.

Pearson, whose post-collegiate preparation has become even more unpredictable due to the COVID-19 pandemic, said Chorale Roanne’s offer was the right fit at the right time.

“It kind of came by surprise,” Pearson said. “When they reached out to my agent, they said a lot of the right things and a lot of the things they said matched up to our research…With everything going on and the pandemic going on, I wouldn’t say (it was) a safe bet, but it was a smart move to make.”

For Pearson, signing a professional contract has been a lifelong dream. Since realizing it could become a reality, he has been working nonstop to make it come true but admits he never knew what the future would hold.

“It’s always been a dream to want to play professional basketball,” Pearson said. “I realized I had a chance to do some special things, but I never really knew where my path would go. Even in my senior year until about 2-3 weeks ago, I didn’t know because, with basketball, it’s so unpredictable.”

Pearson signed to the Pro A after a promising senior season that ended prematurely after all Texas State sports were canceled due to the COVID-19 pandemic. As the No. 3 seed in the Sun Belt Championship Tournament, the Bobcats were projected by many to win and gain a bid to the NCAA Tournament.

Texas State Head Coach Danny Kaspar said the Bobcats were successful in part due to the performances of Pearson and fellow senior Eric Terry.

“Nijal is a very special player that is deserving of this opportunity to play overseas,” Kaspar said. “He is a great young man and that’s one reason why we were successful this year because our seniors were very strong young men who competed.”

Kaspar said it was evident Pearson would earn a post-collegiate opportunity.

“That became very obvious to me as a freshman that he would have the opportunity to go overseas and play,” Kaspar said. “I knew he could play overseas, but I’m excited that he’s getting signed to not only play but start in one of the better leagues in Europe.”

Redshirt junior Marlin Davis, who considers himself Pearson’s “long-lost stepbrother”, said Pearson has been preparing for this moment for as long as they have known each other. He said he is happy to witness Pearson’s dreams come to fruition.

“Nijal put in a lot of work throughout the past four years and as long as I’ve known him—in high school too,” Davis said. “I’m very proud of all that he’s accomplished, and I can’t wait to see him continue to grow.”

Chorale Roanne has won two championships, competed in the No. 1 European league, Euroleague, in 2007-2008 and became a member of the Pro A in 2018-2019 after a five-year hiatus in the second-tier Pro B league. The LNB Pro A league is often considered one of the best in Europe and was among the top non-NBA leagues named by ESPN.

Pearson said he is excited to join the league and continue to do what he feels he has always done.

“I’m looking to just show how good of a basketball player I can be, keep expanding and growing, adjust to the overseas game, have fun and play basketball,” Pearson said.

Aside from basketball, Pearson will be traveling and living abroad for 9-10 months out of the year for the first time in his life.

Pearson said it will be hard to be away from his family and friends for an extended period of time but realizes these are the sacrifices he has been preparing for since he started playing basketball.

Former Texas State basketball player Alex Peacock, who continued a post-collegiate career in Cyprus in 2019 and has traveled to play his entire life, said that traveling to play provides a once in a lifetime experience—something Pearson will proudly be able to share with others down the road.

“I know Nijal’s going to work wherever he’s at,” Peacock said. “He could be on Mars and he’s going to excel, but my biggest advice to him aside from that is to embrace where he’s at and figure out how to adjust, because next year he might be in a completely different place. Picking up little pieces from everywhere he’s at, learning different cultures, (it’s) all stuff he can tell his little girl one day. That’s pretty cool.”

The Pro A has jumpstarted numerous NBA players’ careers, including that of Los Angeles Clippers forward JaMychal Green, who began his career on the same team Nijal will join. Former San Antonio Spurs star Tony Parker began his career in the Pro A as well and now owns Pro A defending champions ASVEL Basket.

Pearson’s focus on competing at the highest level possible means his ultimate goal is to play in the NBA. For the time being, he’s approaching Chorale Roanne as not just a step in the right direction but a valuable opportunity to showcase his talent and work ethic.

“I don’t have a game plan necessarily,” Pearson said. “Of course I want to get back to the NBA, but for me to do that, I have to take advantage of this opportunity right now.”

For Pearson, all that matters is that he gets to continue to play basketball, regardless of what the future may hold.

“The opportunity is amazing,” Pearson said. “As a basketball player, to go to a professional level, obviously, that’s incomparable. I’m just blessed to be in this position and keep playing basketball.”

For more information on the LBA Pro A, Chorale Roanne and scheduling, visit Eurobasket’s website.