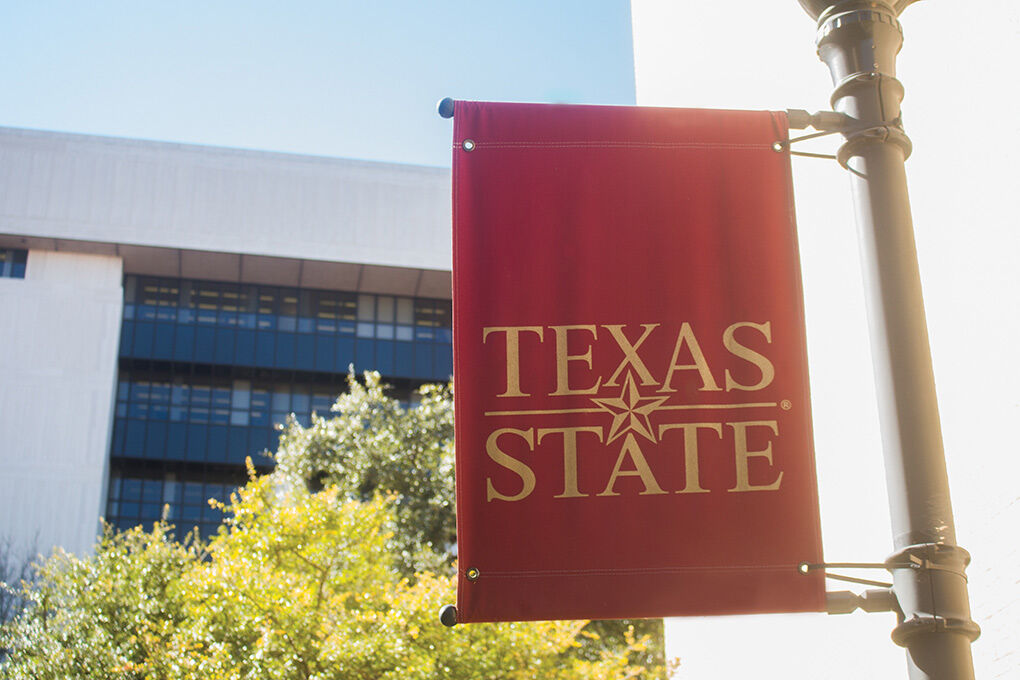 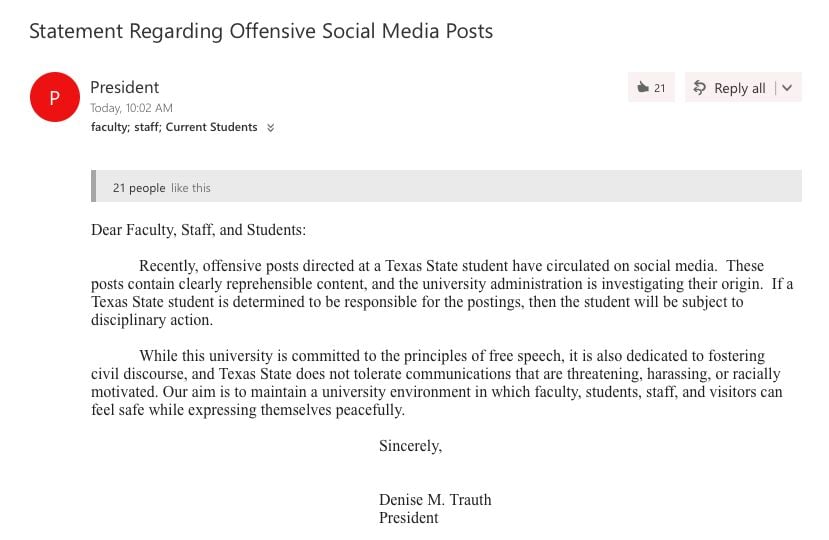 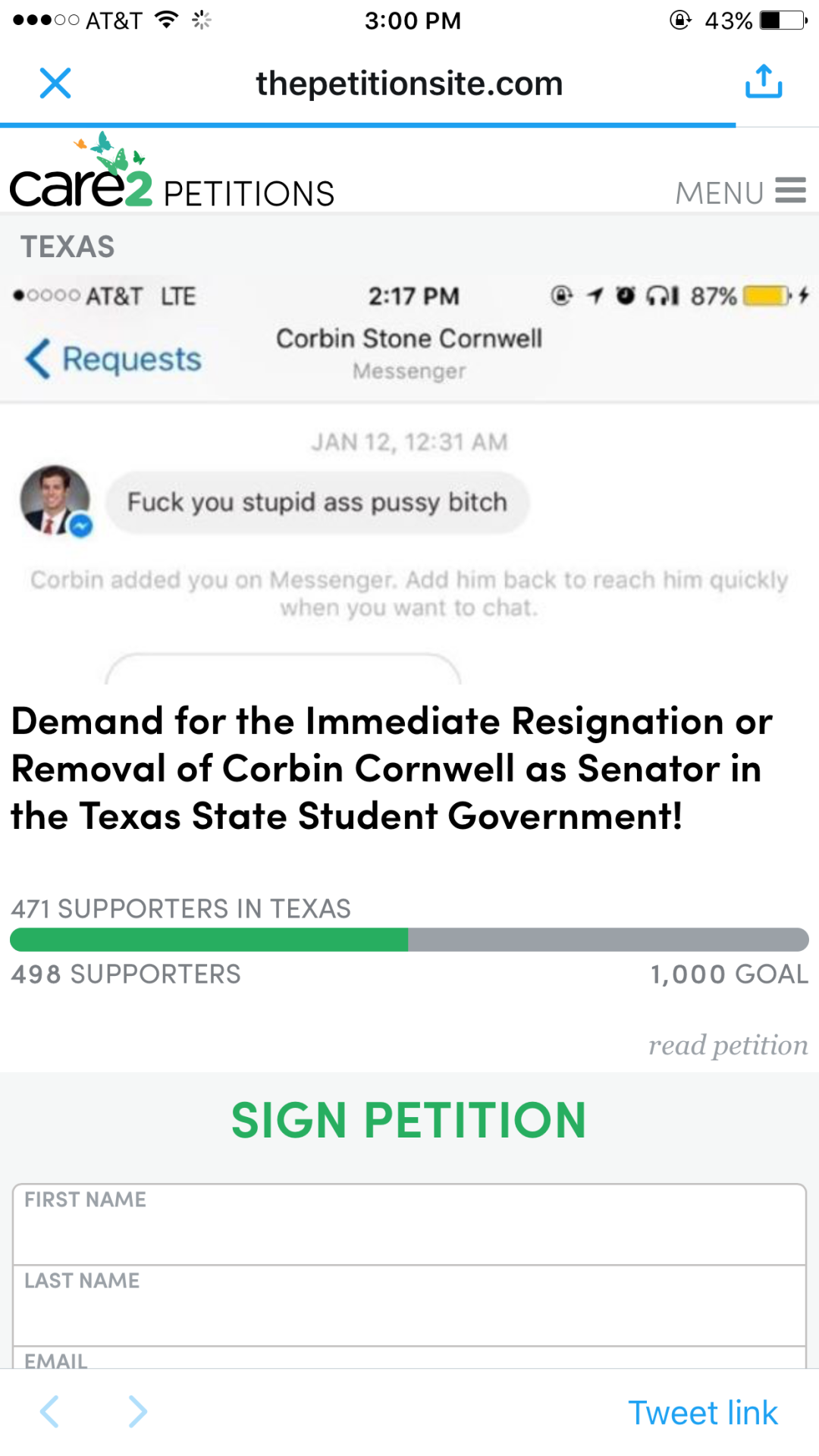 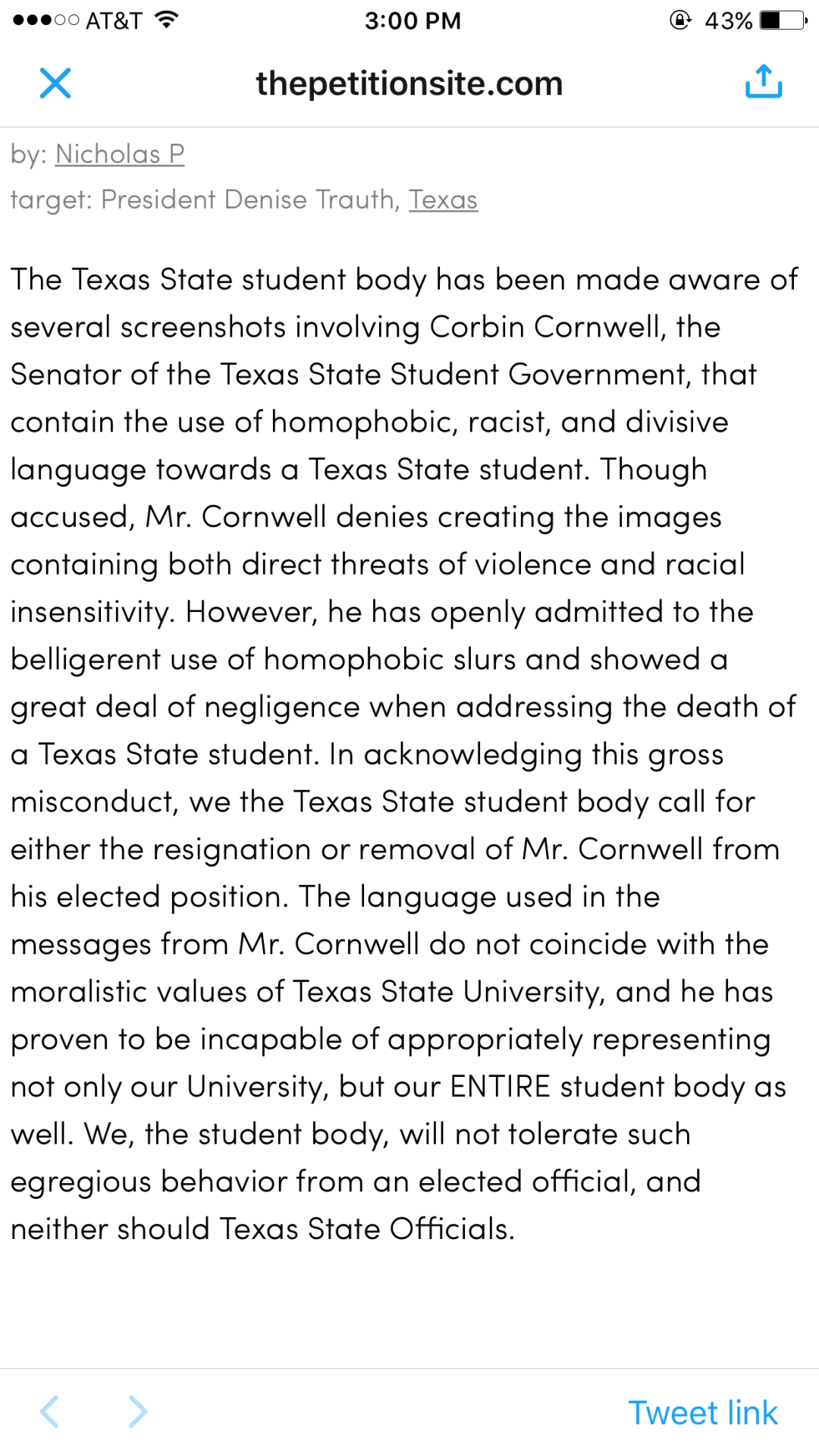 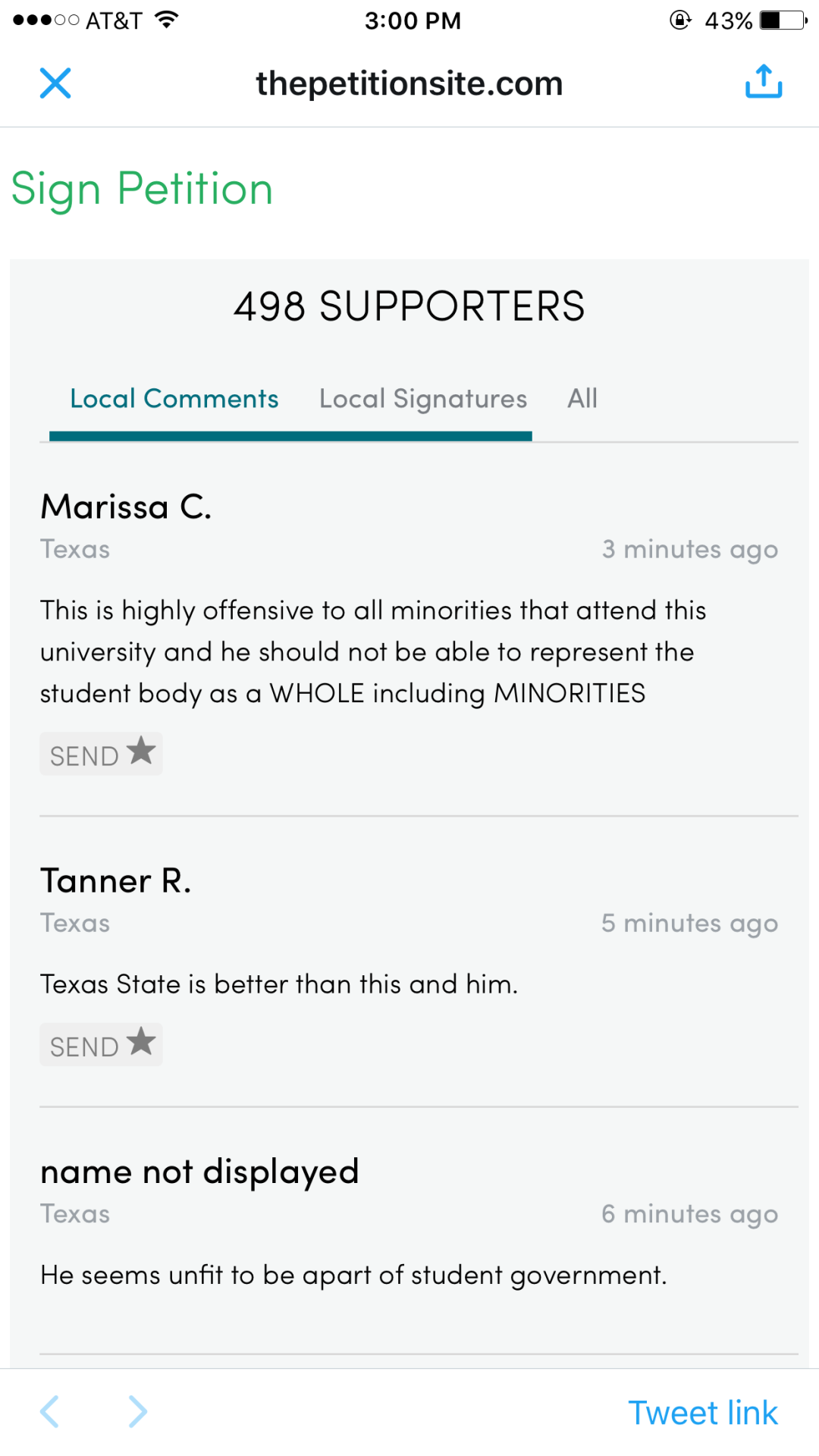 Texas State University is investigating an incident involving an offensive image and vulgar language directed at a Texas State student that surfaced on social media in January, a university spokesperson said.

The image featured student David Hickland’s face placed onto a black and white photograph of a lynching victim. The image was tweeted by @txstfrat5645, an anonymous account. The account tagged Hickland and referred to him with racial slurs. Hickland did not respond for comment per request.

How is @txst fine with someone like @CorbinCornwell representing our student body? What an embarrassment! ‍âï¸ pic.twitter.com/uk0FIDrMPh

Texas State was notified of the incident via Twitter by a tweet showing screenshots of messages sent to Hickland from student Corbin Cornwell’s Facebook account. The messages used defamatory language and homophobic slurs. The date of the messages from Cornwell’s account correlate with the date the photo was tweeted out from the anonymous account. In addition, a fake Facebook account was created in Hickland’s name and consisted of three friends including Cornwell.

@Nicholas_ted33 @CorbinCornwell This content is clearly offensive and we are investigating.

Lol who has the energy to do this? Y’all are bored and sociopathic get a life pic.twitter.com/ackRj5UN5h

Cornwell denied the allegations of creating the altered image.

“I know this is not the first picture created, and it’s not the first time that I have been accused,” he said in an email response. “I disagree with David, but I did not have anything to do with that photo shopped image.”

The allegations came two days after Cornwell was sworn in as a student government senator for the 2017-18 academic year.

Cornwell said he is in the process of hiring a lawyer to take legal action against the defamation of his name on twitter.

Somebody tell dude he wasting his time dm’ing me since he blocked me. pic.twitter.com/KG7XdncH3A

Connor Clegg, student body president, condemned the offensive content and said he does not know who sent the messages, but assures there will be consequences for the individual or individuals found guilty.

As for the Facebook messages from Cornwell’s account, the messages were in reference to the four fraternities suspended off campus after hosting a party where the death of Texas State student Jordin Taylor occurred.

“Predictably, I was upset about this decision in which an organization I had been involved in was removed from campus,” Cornwell said. “At the time David Hickland decided to post on Facebook a status that publicly exposed the decision in a very unprofessional manner. At that point I messaged him privately via Facebook and expressed my displeasure for his post.”

One of Cornwell’s Facebook messages read, “Your post is so disrespectful and you are the epitome of a fucking pussy. You don’t have the authority or the rights to post and let that go public you piece of fucking shit.”

Matt Flores, Texas State spokesperson, confirmed that the incident is under investigation.

“Clearly, this isn’t who we are as Bobcats. We don’t condone that kind of language,” Flores said.

On Twitter, both Hickland and Cornwell mentioned an interest in pursuing legal action. Many other tweets continue to be added to the conversation as students become aware of the tweets.

@JacobiShaw @Nicholas_ted33 @txst @CorbinCornwell Because they don’t exist, @JacobiShaw. His initial request to message me still hasn’t been accepted nor replied to. Thanks for playing! pic.twitter.com/6YNShXJeEO

Update 3:02 p.m. April 20 | A petition has been started online calling for the removal of Corbin Cornwell as a senator for Texas State’s Student Government.

#TXST please know your rights as students as they are outlined in the Student Government Constitution. Be sure to share!! pic.twitter.com/PwwQtEJIIE

The University Star will continue to update information.