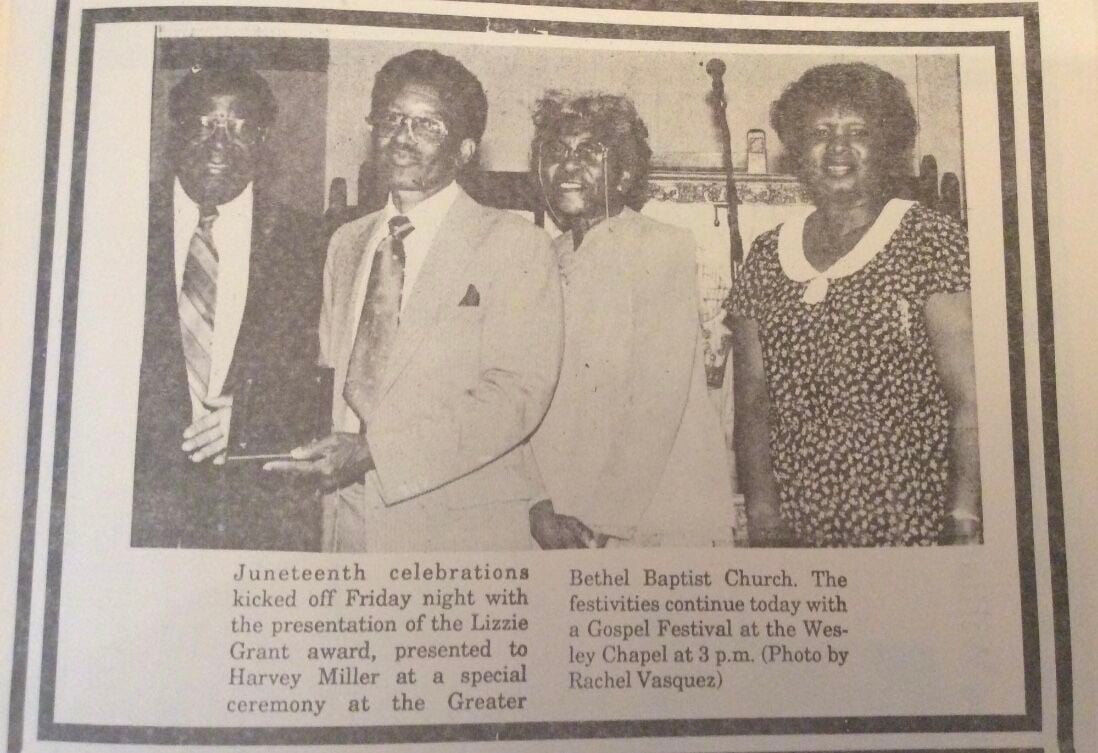 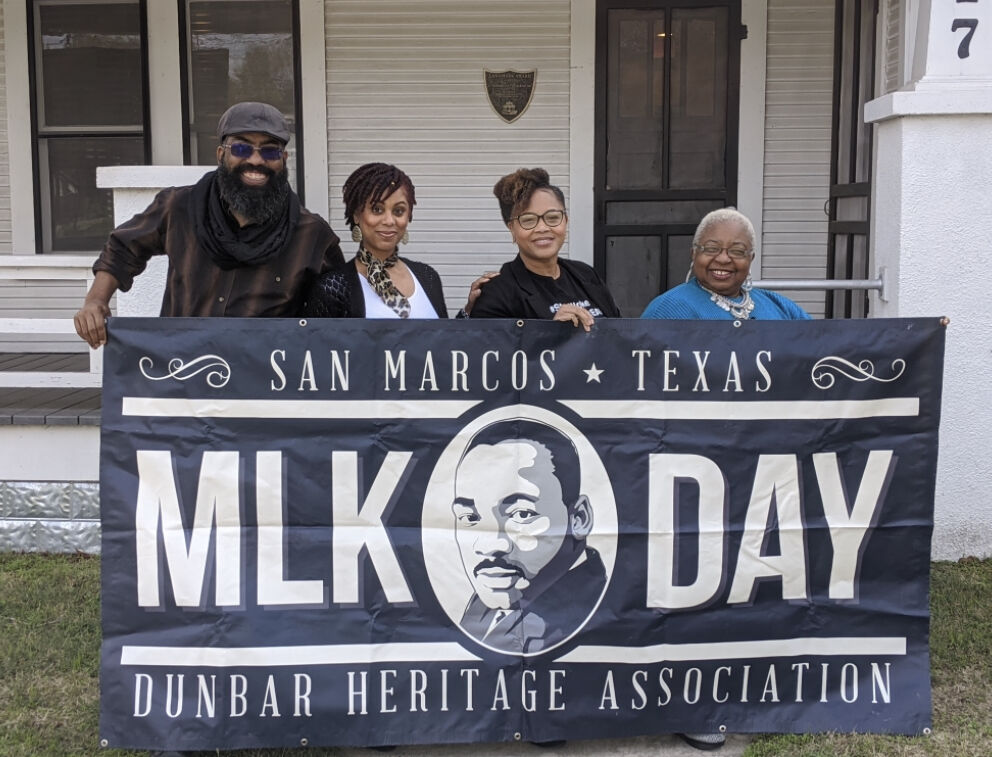 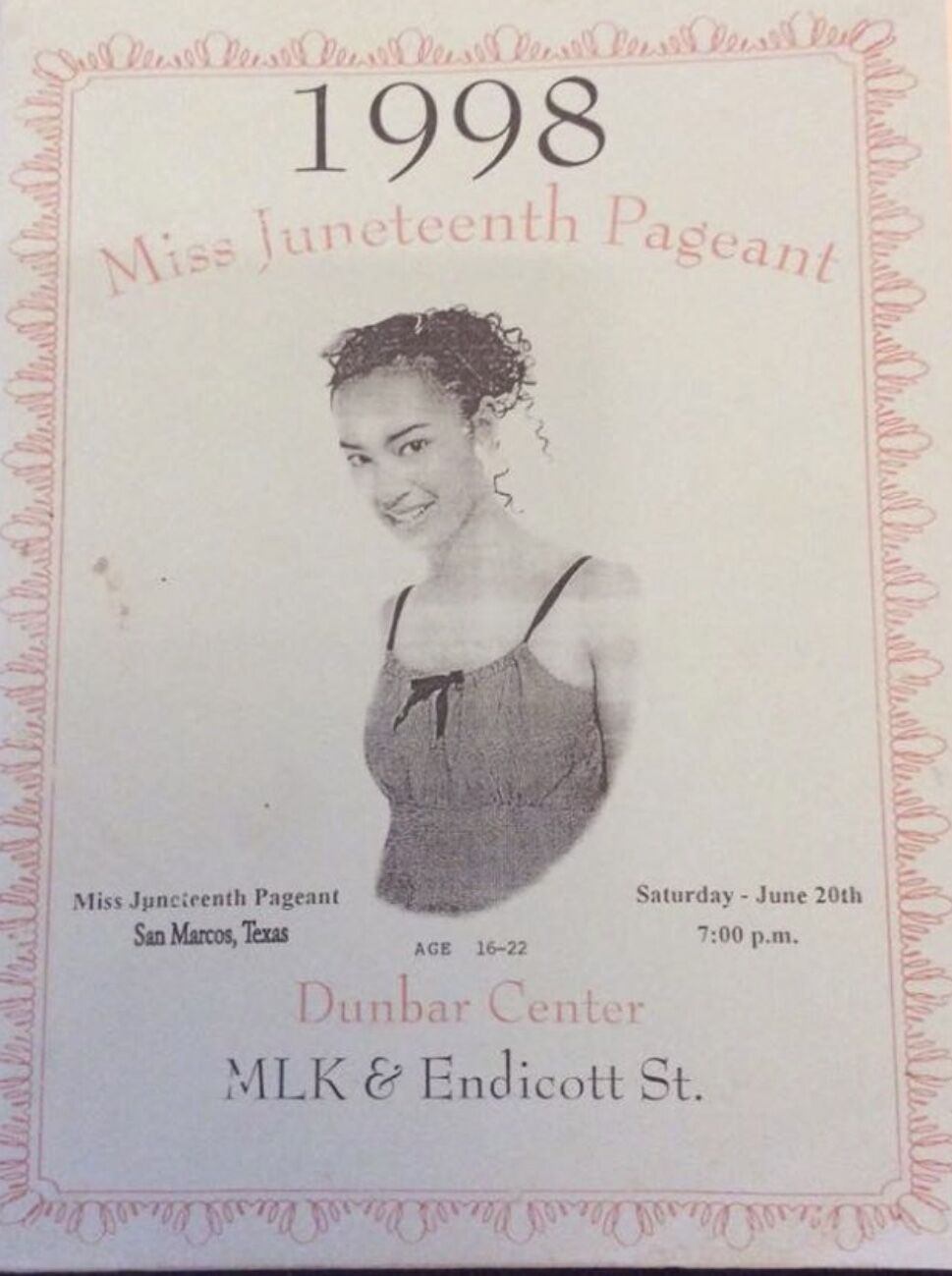 A flyer announcing the 1998 Miss Juneteenth Pageant scheduled to be held 7 p.m. Saturday, June 20, 1998, at the Dunbar Center. (Photo courtesy of the Dunbar Heritage Association ) 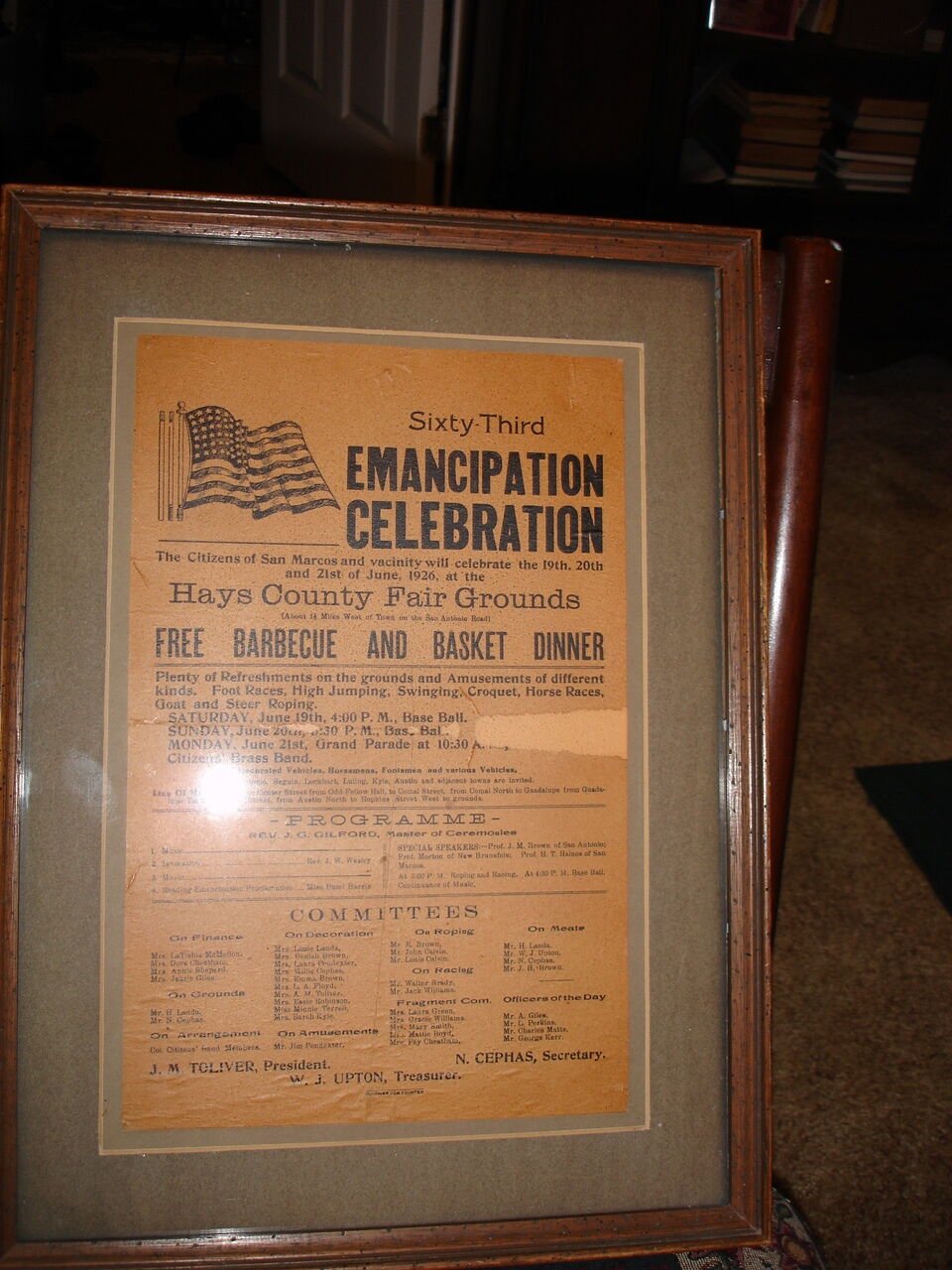 A framed flyer of the sixty-third Emancipation Celebration held on the 19th, 20th and 21st of June 1926 at the Hays County Fair Grounds. Holt said the flyer is an example of how important celebrating Juneteeth has been for the Black community even as far back as 1926. (Photo courtesy of Elvin Holt)

A holiday locally known for barbecue cook-offs, 5K runs and beauty pageants is expected to look a little different this year due to COVID-19. However, the symbolism behind it still hits close to home for community members preserving Black history.

Juneteenth is a remembrance of June 19, 1865, when General Gordon Granger arrived in Galveston and announced the end of slavery. But the holiday means so much more in the community, especially during a time where Black people are no longer enslaved legally but still find themselves on the receiving end of systemic oppression.

The day also serves as a reminder that there are actually two days symbolizing freedom in the U.S., not just the Fourth of July.

Established in 1999, the DHA is a local organization that promotes Black culture in the San Marcos and Hays County areas. Banbury said even though the Black community in San Marcos has decreased over the years, it is important for the DHA to preserve Black history and carry on special holidays like Juneteenth.

“Even me as an African American person, I still wasn’t taught this history in our schools even though it’s a part of American history,” Banbury said. “It’s important for us to bring awareness to this holiday and to create conversation.”

This year, the DHA will host a virtual Juneteenth celebration from 3-7 p.m. on Facebook Live. Viewers can expect a line up of singing, dancing and praising.

In an effort to make local Black history accessible, Adam Landry, technical services librarian of the San Marcos Public Library, has begun working with the Calaboose Museum to digitize historical documents such as obituaries.

The museum was organized in 1997 by Johnnie Armstead. In the beginning, it consisted of Armstead’s personal collection of various Black historic items such as artifacts and photographs, soon-to-be featured in the “Johnnie M. Armstead African American History Collection”.

“What I’ve found over time is the African American story is largely absent from local history and the historic record,” Landry said. “My objective with this project is to fill the gaps in our collection and present a history that is more representative of the whole community.”

Currently, Landry is hoping to expand the “Johnnie M. Armstead African American History Collection”. The proposed project hopes to digitize various work from Armstead and the Calaboose Museum in order to make local history reachable for those collecting history or conducting research.

“This is how we’re celebrating Juneteenth, by fostering this relationship with the Calaboose Museum and further the sharing of local history and creating more accessibility and inclusion to this important collection and the Calaboose,” Landry said.

The history of the Calaboose Museum dates back to 1873 when it was known as the first jail in Hays County. By 1884, the Calaboose was used to hold Black inmates once the second jail in the area was built. During WWII, the building served as a community center and cafe for Black soldiers.

The building eventually served as a social center for the Black community. By 1993, the city council planned on tearing down the building to replace it with a parking lot.

However, Armstead, who grew up in San Marcos, persuaded the council to allow her to raise funds to renovate the building and turn it into a local Black history museum. She served as the museum board president until she passed away in 2008.

Texas State English professor Dr. Elvin Holt was on the museum’s original board of directors and has served as the president of the board since 2010.

Holt said the museum’s goal is to preserve local Black history and recognize local historical figures such as Ulysses Cephas, a son of former slaves who was born in San Marcos and became nationally known for his blacksmith skills, and Eddie Durham, a San Marcos native who became internationally known as a jazz musician.

Holt said he is committed to his goal of helping the museum educate the community on the impact historical figures have had in the city and making sure none of it is forgotten.

“In the African American community we lost a tremendous amount of Black history because there was nobody to preserve it; nobody felt that it was valuable to preserve,” Holt said. “It gives me a great sense of accomplishment to know that I’m part of the process of trying to keep our history alive in San Marcos.”

Holt said the museum has celebrated Juneteenth since its founding and participated in local celebrations such as the Juneteenth parade. In the past, it would invite parade participants for a museum tour after the procession.

With recent protests against police brutality and anti-Black racism, Holt said it is imperative for individuals to recognize Juneteenth as a historical event and a larger piece of America’s story.

“Slavery touched this area as it did most of the south, and I think Juneteenth is an occasion for remembering that slavery actually did happen, and slavery had consequences,” Holt said. “We have so many people who want to erase the memory of slavery, and they say ‘just leave it in the past’, but Juneteenth forces us to remember slavery as an event that still impacts the present.”

47 states along with the District of Columbia have passed legislation recognizing Juneteenth as a state holiday or a day of observance. Holt said he is happy Juneteenth is being recognized as an important piece of history by more people. He feels positive and hopes future generations continue to view Juneteenth as a day of celebration.

For more information about the Dunbar Heritage Association or Calaboose Museum visit their Facebook page or website.

In an effort to foster a more inclusive and affirming college experience for all students, Texas State faculty, staff and students are in the early stages of working to develop a queer studies minor at the university.

As the end of the spring semester arrived on Texas State's campus and students began preparing for finals, the Student Association for Campus Activities (SACA) hosted its third annual Gaillardia Fest, a celebration dedicated to students, letting them unwind before end-of-year stress kicks in.

During its May 5 meeting, Texas State’s Faculty Senate held its last monthly President's Academic Advisory Group (PAAG) of the semester and discussed budgets, considered confidentiality in hiring processes and filled internal Senate roles for the next term.