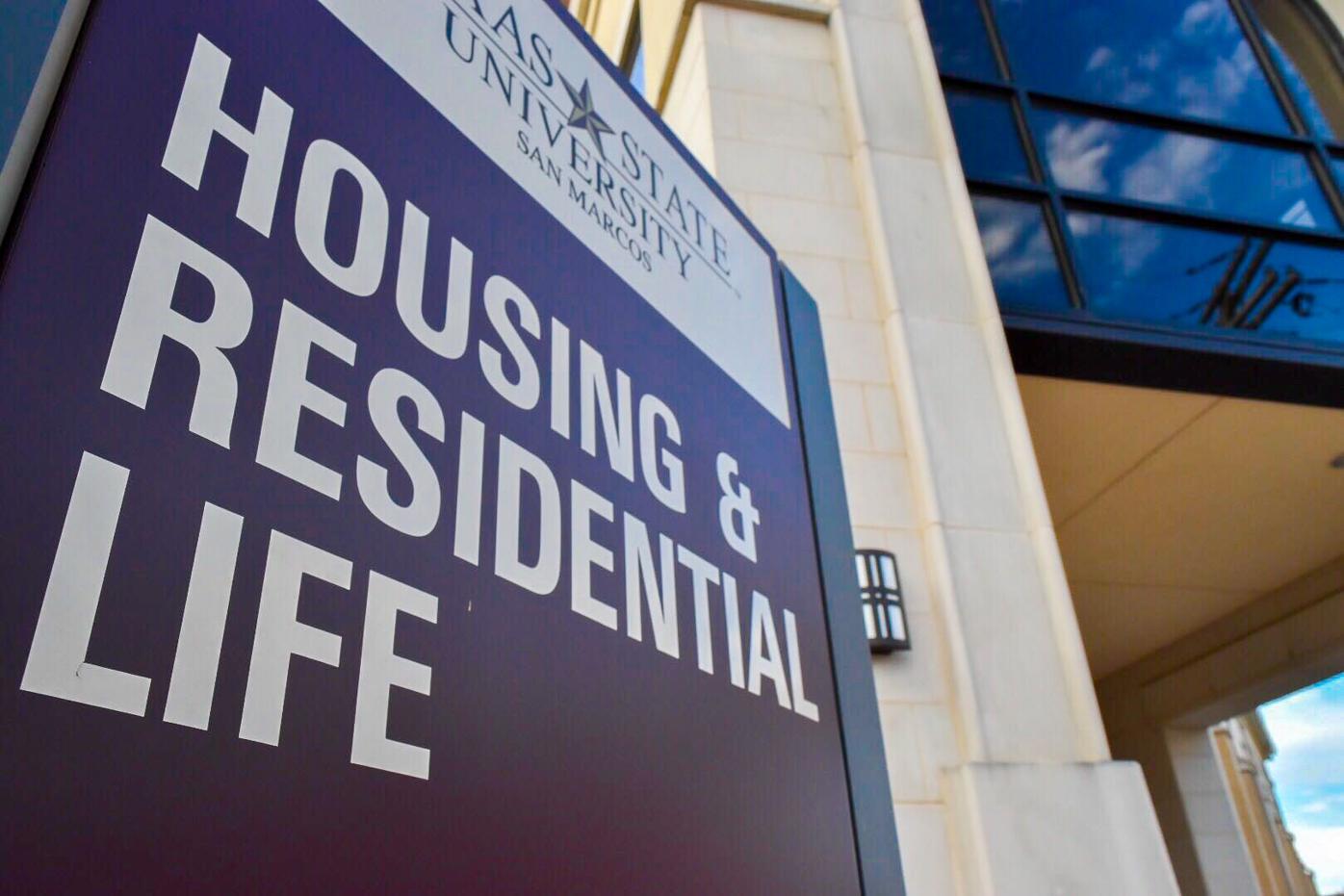 With 38,661 students enrolled at Texas State fall 2018, approximately only 7,000 lived on campus, according to a Root Policy Research report on San Marcos housing. 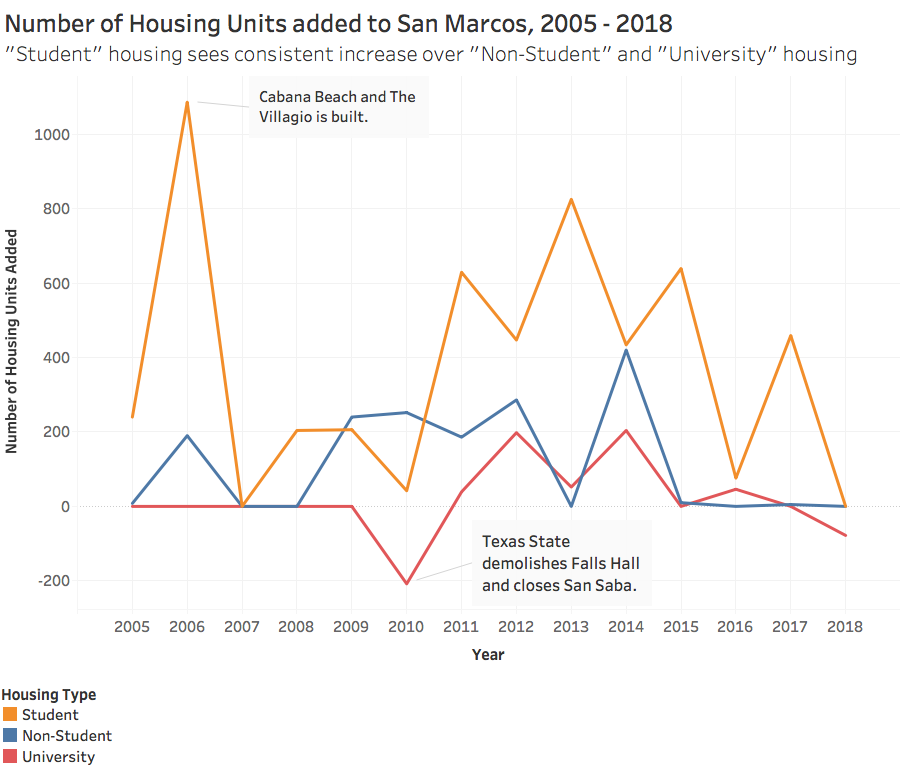 Sandra SadekGraphic showing the number of units in each category of housing since 2005. Data is provided by the City of San Marcos.

San Marcos resident Kathy McCarthy has been living in her house on West San Antonio Street for the last 10 years. The house is also occupied by her daughter and grandson who moved in after struggling to find affordable housing.

“I’m not really eager for (my daughter) to rent anything because if she starts putting all our money into rent, she’ll never be able to save the money for a down payment for a house,” McCarthy said, who also serves on the San Marcos Planning and Zoning Commission. “There really is no such thing as a $150,000 house anymore.”

McCarthy’s daughter is one of the many locals facing the growing need for affordable housing despite the number of apartment complexes being built in the city.

The need for the housing market to accommodate an increasing number of students in small towns has caused worries of “studentification,” according to a Department of Housing and Urban Development report.

Studentification, although closely related to gentrification, is distinct from the latter. According to HUD, “gentrification often involves new residents who live in an area for an extended period of time. Students, on the other hand, live in an area for a more limited period of time.” This trend is heavily linked to the growth of student housing, pushing local residents out.

There are two types of permits available to apartment complexes – multifamily and purpose-built student housing.

According to Elizabeth Ehlers, permit manager for San Marcos Planning and Development Services, the prior city code stated there was no distinction for student complexes.

With the new development code, complexes that qualify for a permit as a purpose-built student housing must also have a conditional use permit, allowing those complexes to be built only in certain locations in a zoning district or only when subject to standards and conditions that assure compatibility with adjoining uses.

“(The previous apartments that were built prior) were all grandfathered in, so we definitely have student housing, but they didn’t have to get that conditional use permit because they were prior to that this new code being adopted,” Ehlers said.

With the designated student housing attribution, complexes can house more than two unrelated individuals in a unit, an exception that does not apply to multi-family complexes.

According to Ehlers, only one project has applied for a conditional use permit, 75 Sylvan LLC.

McCarthy said when 75 Sylvan LLC applied for the conditional permit use, it was rejected by the committee due to its size and location.

“The main reason we turned it down is because we felt that there’s already so much very expensive, by-the-bedroom student housing in town,” McCarthy said. “There’s already a lot of empty apartments in town, so we weren’t convinced that we needed it, or the students needed it.”

According to McCarthy, the city has recently defined zoning locations for student housing within city limits. New permits for purpose-built student housing are mostly zoned along Thorpe Lane, near The Lyndon apartment complex.

75 Sylvan LLC had requested a permit to build its property on the corner of West San Antonio and Guadalupe, down MLK Street.

In a 2014 analysis of 20 college towns, HUD found that an increase in the size of a college’s off-campus population is associated with higher rents, particularly in areas with a relatively high concentration of undergraduate students.

In the same report, HUD found “the presence of a college is associated with home prices that are about 10 percent higher,” and that “colleges (could) increase the size of the tax base by about 24 percent.”

Between 2005 and 2018, there were 28 designated student housing complexes built and only 11 non-student designated housing, according to data provided by the city.

The luxury student housing model, which usually leans toward rent-by-the-bed leases, was first put in place by the Co-Founder and CEO of American Campus Communities Bill Bayless in 1993. The company is headquartered in Austin.

According to a Bloomberg article, American Campus Communities is one of the grandfathers of this business model. ACC started by establishing itself in several cities by building luxury student apartments and renovating existing properties. The company went public in 2004 and by 2018 had acquired $5.9 billion of property.

One of the company’s business segment is the wholly-owned properties, which provides off-campus facilities to students in close proximity to the school campus. In the fiscal year 2018, this segment reported $829.1 million in revenues, accounting to 94% of their total revenue, according to their 2018 company profile.

In a statement from the 2018 annual report celebrating their 25-year anniversary, Bayless wrote the vision of the company is “to be the nation’s premier provider of quality student housing communities and services through a unique understanding of and an unrelenting commitment to students, parents, educational institutions and investors.”

“We faced many challenges in our early years,” Bayless wrote in the statement. “Student housing was not considered an institutional asset class and was primarily a ‘Ma and Pa’ business offering low-quality products owned by absentee landlords. Investors also had misperceptions, driven in part by the movie ‘Animal House,’ which resulted in a lack of attractive funding for the sector.”

In 2018, ACC broke ground on a $615 million project at Walt Disney World Resort in Florida to provide housing for more than 20,000 students who annually participate in Disney’s internship programs.

Several phone call attempts were made to reach ACC with no response on Dec. 2, 3, 5. An email was sent Dec. 3 to the headquarters through the help of a manager at the Vistas in San Marcos. The manager responded Dec. 10 that he would not be able to meet.

Despite the influx of students in San Marcos, McCarthy said this is something the city has to live with, and she does not resent the growing youth population.

“I think the college and the students bring freshness and life,” McCarthy said. “By and large, the student (relationship) in San Marcos brings interesting new businesses to town…it’s a good thing, but I think that we have a master plan and we need to stick to it.”

The Main Point: We support The Daily Gamecock’s decision

The University Star's editorial board stands by The Daily Gamecock, the student-run news organization of the University of South Carolina, and its decision to take a week off.

Texas State moved all residents out of Sterry Hall to utilize the building for quarantined students identified as close contacts to positive COVID-19 cases, the Department of Residential Life told The University Star on Oct. 23.