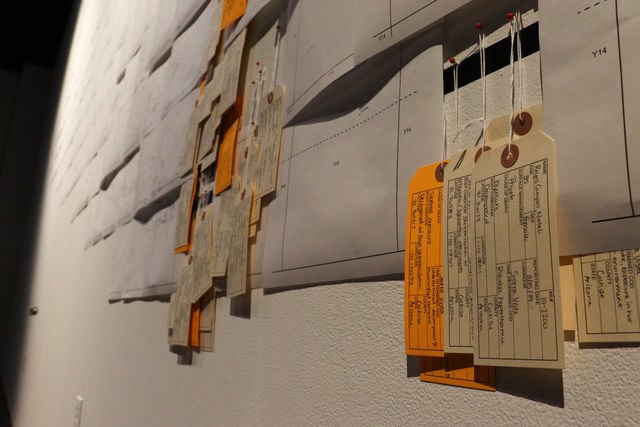 Identifying tags with information of those who have died while crossing the U.S./Mexico border between the mid 1990s and 2020 are pinpointed on a map as part of the Hostile Terrain 94 installation, Tuesday, Sept. 23, 2020, at Texas State Galleries. 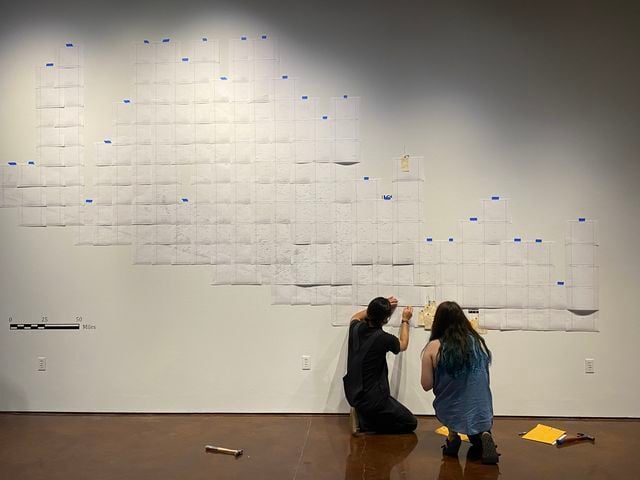 Members of Texas State Galleries pin yellow toe tags marking the location where a migrant lost their life while traveling through the Sonoran Desert at the Hostile Terrain 94 installation inside Texas State Galleries. Exhibit visitors are invited to fill out toe tags with the personal information of a person who died while migrating. (Photo courtesy of Margo Handwerker ) 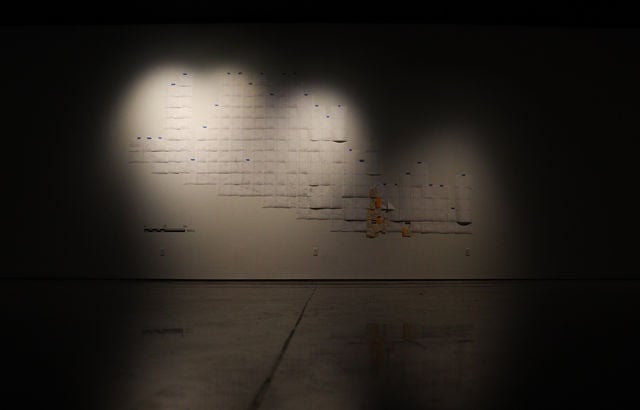 The Hostile Terrain 94 installation in Texas State Galleries features a map with pinpointing around 3,200 locations where people have died while crossing the U.S./Mexico border between the mid 1990s and 2020. Rebecca Harrell

The Undocumented Migration Project has long sought to bring awareness to the thousands of people who died as a direct result of U.S. policy. Now, the organization is shining a light on it through an art installation at Texas State Galleries.

In 1994, the U.S. Border Patrol implemented a strategy known as Prevention Through Deterrence. This strategy sought to stop migrants from crossing the U.S.-Mexico border at urban points of entry like El Paso, Tucson and San Diego, by doubling down on security in those areas. This way, it would only be possible to cross the border through dangerous areas like the Sonoran Desert in Arizona.

The idea was that by forcing migrants to choose between dangerous conditions and not migrating, they would choose the latter. The reality, however, is that people continue to migrate, only now they are funneled through deserts where they face life-threatening conditions like 100-degree weather, rugged terrain, scorpions and cacti.

An estimated 10,000 people have died trying to cross the Sonoran Desert since the strategy’s inception—and that’s just one point of entry.

Members of the Undocumented Migration Project, which began as an interdisciplinary anthropological endeavor under Jason De León at the University of Michigan, have spent the past decade attempting to identify and repatriate the remains of people who lost their lives trying to cross into the U.S.

More recently, the project has evolved into an art installation called Hostile Terrain 94. The installation features a map of the Sonoran Desert with toe tags pinned to the spots where bodies were found. Visitors are invited to fill out toe tags with the personal information of a person who died trying to migrate.

Nicole Smith is an exhibition coordinator at Undocumented Migration Project and was one of the first people to fill out toe tags for Hostile Terrain 94.

“We spent three months filling out all these tags,” Smith said. “We realized very quickly that this is a really emotional process. We didn’t realize what it would be like until we were sitting down writing thousands of people’s names who have died. We wanted to spread this awareness to other people.”

The project is currently on display at 130 institutions, including galleries in Amsterdam, Australia and at Texas State. Director of Texas State Galleries Margo Handwerker believes the installation is relevant to the San Marcos community given how much immigration factors into Texas culture.

“Everyone has a migration story, whether it’s theirs or their family’s,” Handwerker said. “This is a way for students to understand more about their own histories, to have empathy, to give students who have experienced this an opportunity to share that with others. I think for a lot of our students, maybe they’re just not even aware that this humanitarian crisis is actually happening so close.”

Handwerker has witnessed various groups participate in filling out toe tags and says the reactions range from grief to passionate calls-to-action.

Michelle Sotolongo, who works as the coordinator for the Texas State Monarch Center for Immigrant Students, has spent the past 10 years providing resources to Texas State’s immigrant student population and describes the way the conversation surrounding immigration has changed as “mind-blowing”.

What was once a hushed conversation among activist and academic circles is now on the national stage and part of mainstream dialogue. Sotolongo credits DACA in part for helping expand people’s view of immigrants as what they are: People.

“People are here to work and live and contribute to their communities,” Sotolongo said. “Immigrants really enrich the lives of everybody. The cultural wealth that they bring is amazing.”

Sotolongo is grateful to Hostile Terrain 94 for providing a forum for students and the San Marcos community to come together to reflect on and memorialize the people who have come to the U.S. seeking opportunity and a better life.

“I really appreciate being able to be part of something that adds that level of humanity that I think we really need,” Sotolongo said. “It’s a visual expression of a lot of the work I’ve been doing over the past 10 years trying to create empathy and an understanding.”

More information about visiting Hostile Terrain 94 can be found on the Texas State Galleries website.