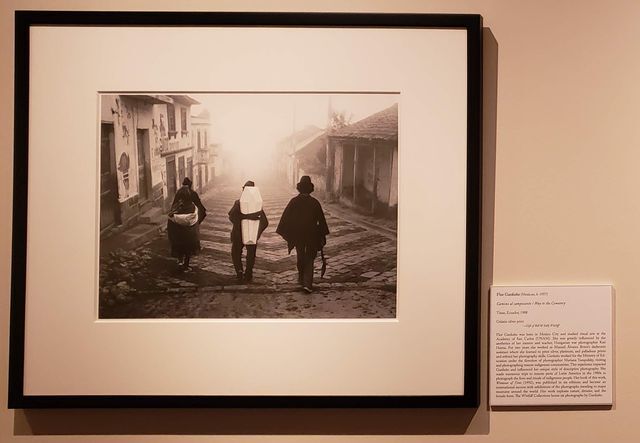 A framed photograph by Mexican photographer Flor Garduño on display at the “Through Her Lens” exhibit, Tuesday, Sept. 8, 2020, inside The Wittliff Collections. This photograph is one of six by Garduño featured at the gallery. 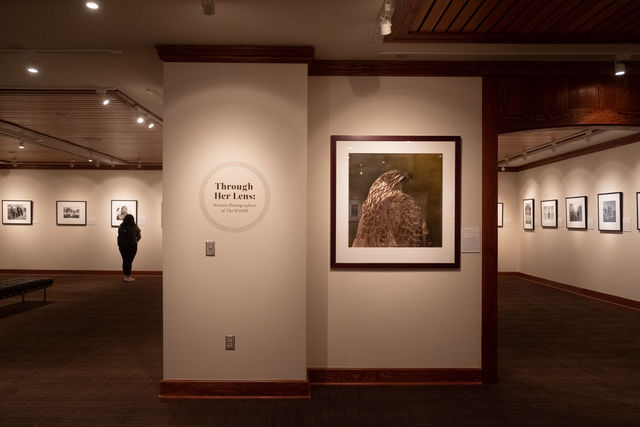 A student explores the “Through Her Lens” exhibit, Tuesday, Sept. 1, 2020, at The Wittliff Collections located on the seventh floor of Alkek Library. “Through Her Lens”, showcases the works of 60 women photographers. 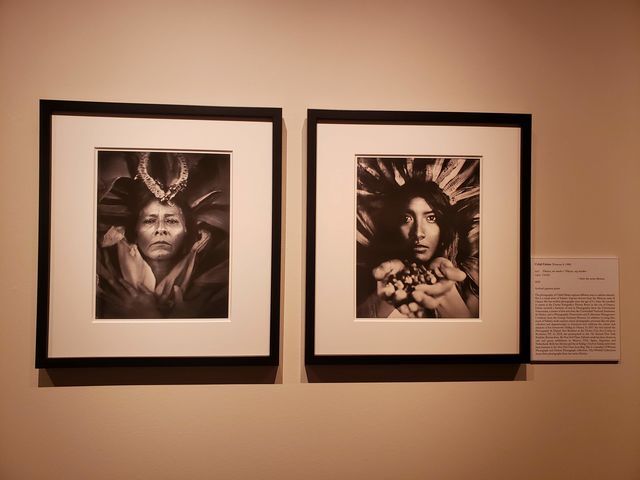 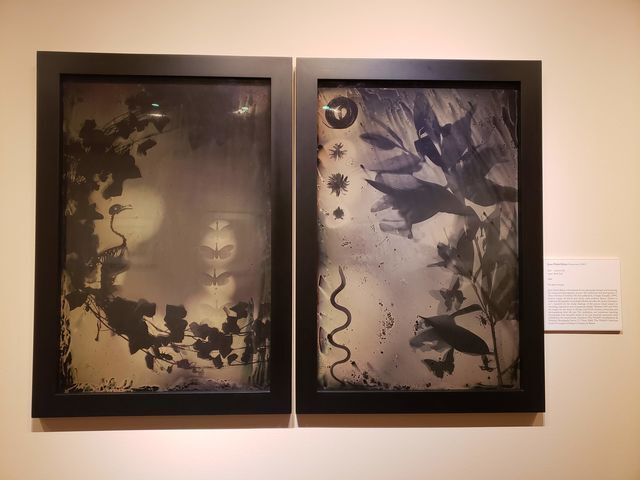 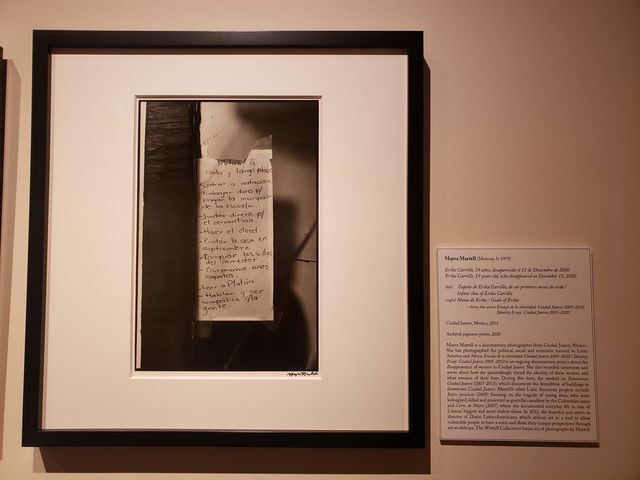 A list of short and longterm goals left behind by Erika Carillo, a 19-year-old girl who disappeared in Ciudad Juarez, Mexico, sits framed on display at the “Through Her Lens” exhibit, Tuesday, Sept. 8, 2020, inside The Wittliff Collections. The photograph is a part of Mayra Martell’s series, “Ensayo de Identidad: Ciudad Juárez 2005-2020”. Tania Zapien

A framed photograph by Mexican photographer Flor Garduño on display at the “Through Her Lens” exhibit, Tuesday, Sept. 8, 2020, inside The Wittliff Collections. This photograph is one of six by Garduño featured at the gallery.

A student explores the “Through Her Lens” exhibit, Tuesday, Sept. 1, 2020, at The Wittliff Collections located on the seventh floor of Alkek Library. “Through Her Lens”, showcases the works of 60 women photographers.

For over 40 years, The Wittliff Collections has acquired and preserved prized works of art such as photographs, sculptures and literary masterpieces. Its latest exhibition, “Through Her Lens”, showcases the works of 60 women photographers. This show, like most at The Wittliff, places the beauty and importance of southern and Mexican culture at the center.

Carla Ellard, photography archivist and curator of the Southwestern and Mexican photography collection at The Wittliff, worked closely with Bill Wittliff, the founding donor of The Wittliff Collections, on developing the idea of “Through Her Lens” back in 2018.

“Originally we were planning on this exhibit to open last fall, but Bill passed away last year, so we changed our plans to honor him with a photography exhibit,” Ellard said.

Wittliff provided input when it came to which photographs would be selected, and Ellard and her assistant helped bring Wittliff’s vision to life. Ellard says the project was time-consuming and worked on until the “last minute.”

The gallery welcomes visitors with works of female contemporaries recognized as some of the earliest women photographers in Mexico. As they walk through the exhibit, visitors are introduced to a variety of modern and unique art pieces.

Texas artist Robin Hix, a self-taught film photographer who has created hand-painted photographs since 1985, is one of the photographers featured in the exhibit. Her unique process of painting over printed photographs has captivated the attention of showrooms since the start of her career.

After the Blanco River flood in 2015, Hix lost her home along with 30 years worth of film and photographs; only a few valuable pieces were saved.

“I had a safety deposit box that had my most precious negatives in it that I was able to save, but after I rebuilt my house, I had to totally start over photographing,” Hix said.

One of the remaining pieces, “Paper Airplanes”, which is featured in the exhibit, captures a group of little boys throwing paper airplanes in the streets of a small Mexican town.

Through the mix of colors and one-of-a-kind expression on the boys’ faces, Hix showcases the playful and picturesque side of Mexico that has captivated her since she was young.

“It’s one of those magical photographs that you take that you don’t know that you took until you develop your old-school film and make a contact sheet, and I was just stunned,” Hix said.

In contrast to Hix’s image of innocence, some of the exhibit’s most powerful pieces showcase the tragic reality of many Mexican families: The mass disappearance of women and young girls.

Mayra Martell, a photographer and documentarian based in Mexico City, has spent the last 15 years documenting the disappearances of women in her hometown of Ciudad Juarez, Mexico.

Through her series, “Ensayo de Identidad: Ciudad Juárez 2005-2020”, Martell captures the bedrooms left behind by missing women, most of whom are students from low-income families.

The project started after Martell returned to her hometown in 2005 and noticed an alarming amount of posters asking for help in finding missing girls. Martell recalls a great amount of hostility and distrust toward police, so much that many of the posters included the personal phone numbers of family members.

“I was really curious to find out who these girls were and what they were like before they disappeared, which led me to Erika Carillo’s door where her parent’s greeted me and let me into their home,” Martell said.

Carillo was a student at a local university before she went missing in 2005. One of the photographs taken in Carillo’s home shows a handwritten list of her short and long-term goals.

Through the years, Martell has earned the trust of many families across Mexico and has been a part of the ongoing search for a lot of girls.

“There have been several times when the mothers of these girls call me saying that there’s been a body that has been found and [ask] if I can accompany them to identify it,” Martell said.

Although Martell admits photographing these scenes can take an emotional toll on her, sharing these stories and bringing closure to families is what keeps her moving forward.

“There are times when I come home crying from whatever I just saw, but I have to put myself in the shoes of the mothers who just lost their daughters,” Martell said. “I feel like I owe it to them.”

“Through Her Lens” only scratches the surface of these photographers’ best works. Ellard hopes the pieces featured will inspire visitors to do some exploring of their own once they leave the show.

“They’re all wonderful and are only a limited amount of photographs and represent a much larger body of work,” Ellard said.

For more information on the exhibit and information regarding current COVID-19 protocols at The Wittliff Collections, you can visit their website.

The City of San Marcos is requesting residents and local businesses to submit damages caused by this past week's winter storm to the Federal Emergency Management Agency (FEMA).

Texas State will work with Life Anew, a restorative justice organization, during the spring semester to advance internal inclusion and understanding across campus.

Texas State softball (2-0) won its first two games against the Abilene Christian University Wildcats (2-4) in a doubleheader on Feb. 22.

Preserving the past: How locals are protecting historic homes in San Marcos

Embedded within neighborhoods, tucked away behind the allure of shopping outlets and the bright lights of The Square rests hundreds of historical homes displaying clues to the local families, travelers and stories that established the rich 200-year-old history of San Marcos.

Opinion: Vaccine availability is not a means to stop following precautions

As COVID-19 vaccines from Moderna and Pfizer/BioNTech become available to the public, there seems to be widespread optimism that our days of strapping on face masks and hoarding Lysol will soon come to an end. However, it is not so simple. No student, faculty or staff member should make plan…