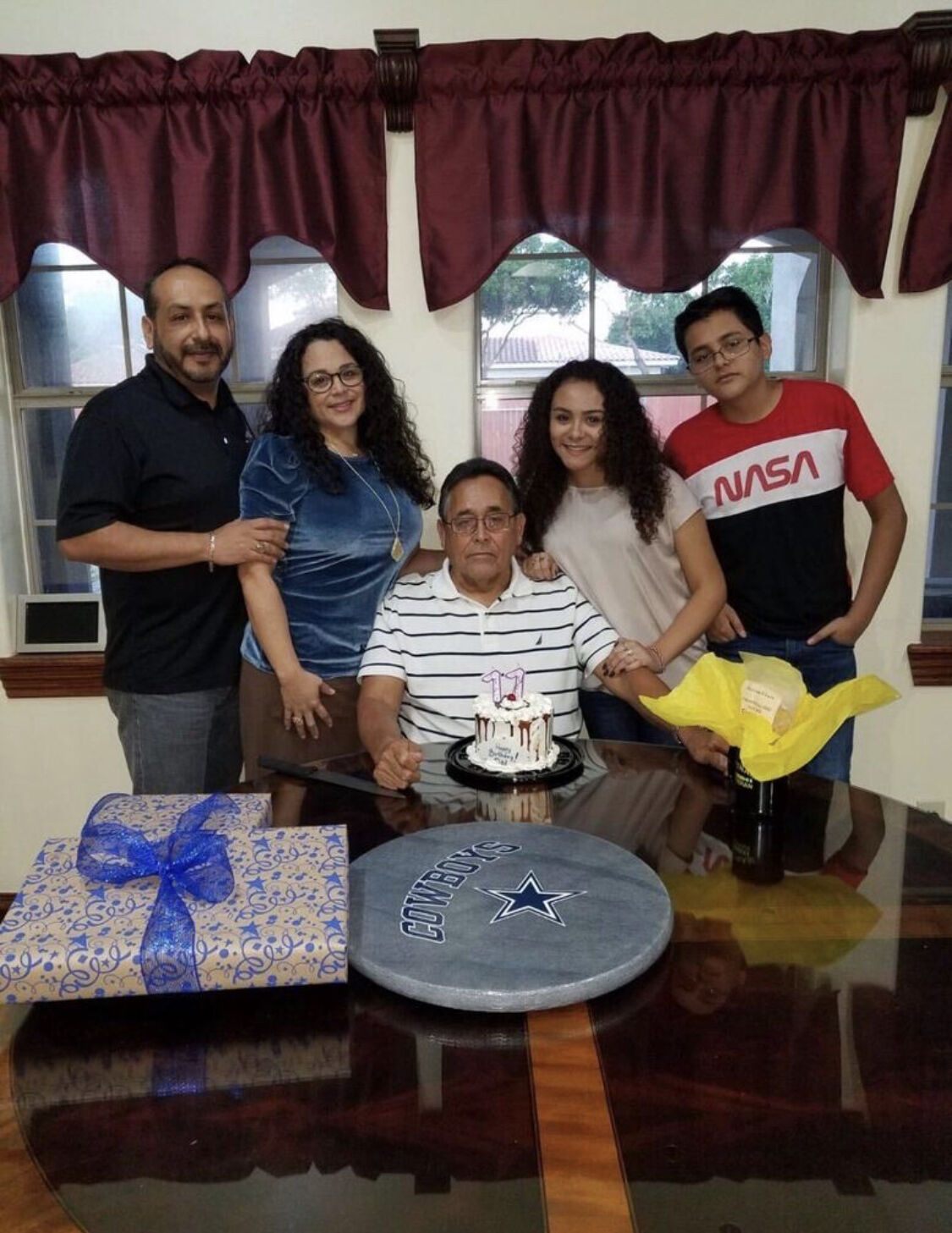 Victoria Vela (second right) smiles with her father, mother and brother at her grandfather's 77th birthday party. Vela's father and grandfather died from COVID-19 in 2020. 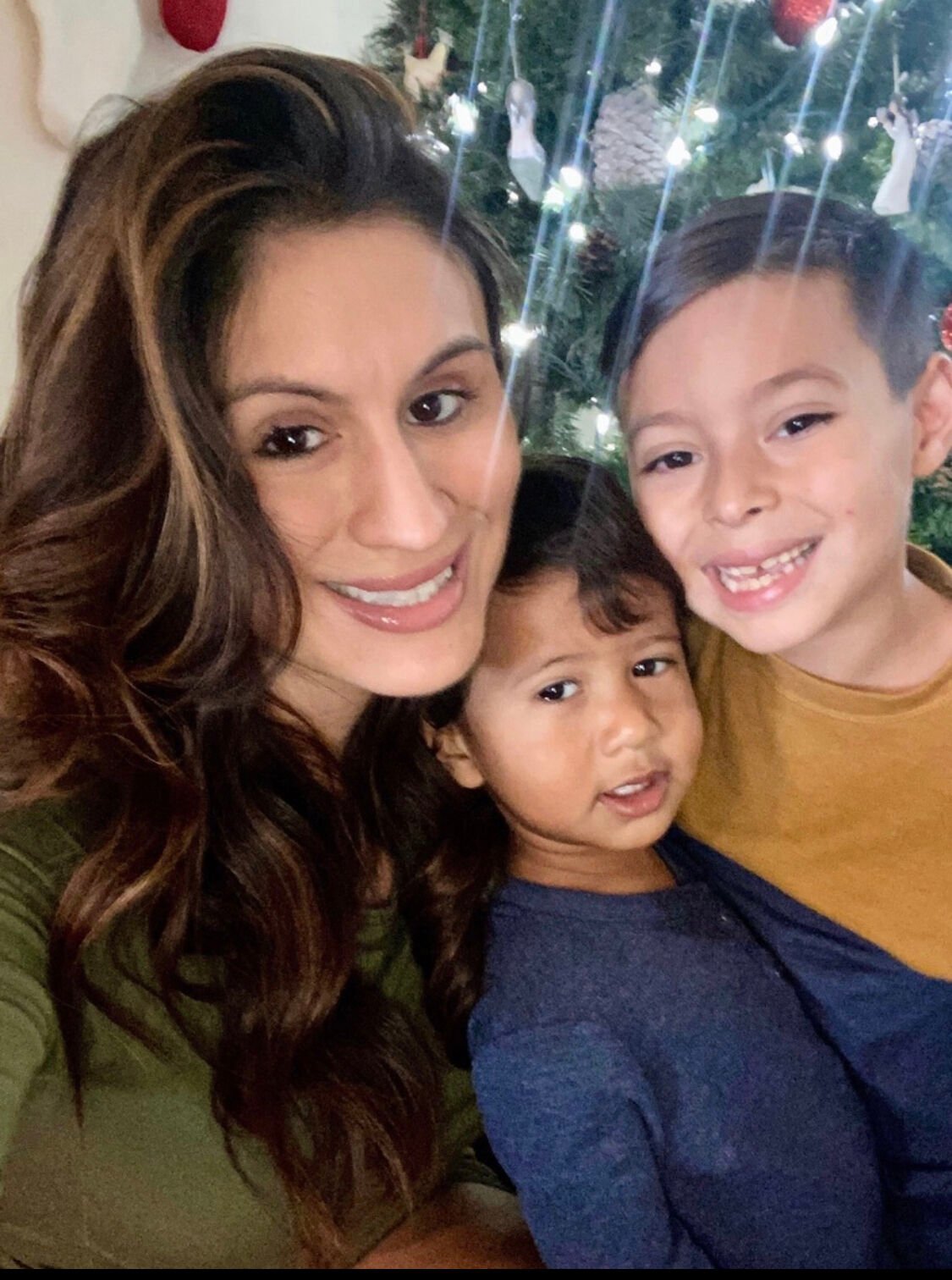 Alison Sanchez smiles with her 1-year-old and 7-year-old sons in front of a Christmas tree.

Victoria Vela still recalls her Quinceañera where she spent time with her dad doing Beyoncé's "Single Ladies" dance, a moment she describes as a testament to how much he really cared for her, and a memory she clings to in light of him and her grandfather dying from COVID-19.

As the new year begins, Hays County has had nearly 11,000 confirmed cases of the virus and over 100 deaths, a tragic reminder of the change, loss and continued uncertainty the local community has faced.

Vela, an English freshman at Texas State, recalls the feelings of loneliness she felt after moving into her dorm just a few days after her dad's passing. The untimely deaths of family members so close to her heart left her grieving in an unfamiliar environment while living through the global health crisis that took their lives.

Vela says while her professors were understanding throughout the semester, it did not make it any easier when she had to explain why she needed time off from school.

When she is back home with her mother and younger brother, she says the grief they share makes her feel less alone. Having them around serves as an important reminder for her to show and tell her loved ones how much she cares about them, just as much as her dad did at the Quinceañera.

Despite the tragedies she and her family faced last year, her faith has pushed her to keep moving forward.

“The whole month my dad was in the hospital, I went to church at 6 a.m. every morning,” Vela said. “I guess it gave me a sense of peace because I believe my dad is in heaven, and I'm going to see him again one day; it’s just going to take a little while, but I will see him again.”

“I never thought it would happen to my family, but it did.”

Alison Sanchez, a psychology senior, is a single mother of two boys. When the pandemic began and businesses shut down, Sanchez recalls not taking the virus too seriously because she felt safe living in the U.S. However, her sense of safety quickly disappeared as COVID-19 cases increased and the mounting death toll began to surface.

“Once I realized that the virus had really hit the United States, I was really scared,” Sanchez said. “But I was also in a really bad marriage and things had started to get abusive. I was afraid of having nowhere to go with my two kids.”

Sanchez recognized leaving her abusive situation during a pandemic would not be easy; she was afraid nobody would want to help her family due to possible exposure to the virus. So she chose to wait it out. She dealt with her abusive husband for months before he finally left the house and was able to divorce him in August.

“It was really hard learning to be a single parent again,” Sanchez said. “On top of that, I was doing my classes and had to really stretch my income to get by.”

Sanchez says one of the biggest challenges she faced was finding childcare. Putting her now 1-year-old son in daycare during a pandemic was out of the question. And her 7-year-old son attended school virtually for about a month until his school reopened.

“It was just really hard to be present in the moment and help my 7-year-old with his homework while the baby needed my attention as well,” Sanchez said. “It was really challenging, especially because I also had to find time to study for my classes.”

Then came the Thanksgiving holiday when her 7-year-old contracted a fever and complained about a headache. She took him to an urgent care clinic where he received a positive test for strep throat but was not given a test for COVID-19. His symptoms did not go away, and Sanchez decided to take him to a pediatrician where he eventually tested positive for the virus.

Her oldest son was the only one who did so, though her doctor told her others in the household likely took the test too soon and that they needed to quarantine for about three weeks.

While her son, who she describes as normally a healthy child, no longer has the virus, he still has not regained all his strength. She says he now gets tired faster when playing outside.

“For the new year, I just want to keep my kids healthy and safe,” Sanchez said. “The most important thing to me is my mental health because if I’m breaking down crying, my kids are suffering too. I am learning to give myself some grace because sometimes all I want to do is scream into a pillow.”

Luke Alsbrooks, a double major in microbiology and clinical laboratory science senior, says the pandemic was not a surprise to him or the others within his field of study. According to Alsbrooks, the threat of a contagious virus was imminent to people within the scientific community, but that did not make it any less alarming.

“It has always been put out there that there's a risk for a pandemic, and we were always told that one would more than likely happen in our lifetime,” Alsbrooks said. “It really wasn't that surprising; it was just kind of a slap in the face for everyone.”

Before the pandemic, Alsbrooks worked at a local restaurant; however, because of businesses shutting down, he was let go from his job and filed for unemployment. He has since regained his job but says it is difficult operating as an essential worker when not everyone respects one another's safety.

“People don’t want to wear a mask, and they want to push tables together, and when you tell them no, they get really angry,” Alsbrooks said.

“It got to a point where some of my family were saying [COVID-19] is a hoax and didn’t want to believe that it was as serious as it actually was,” Alsbrooks said. “So, [also] trying to explain to family and friends that the [pandemic] was a serious thing was challenging.”

Alsbrooks says he has three close friends who contracted COVID-19 and were admitted to the emergency room because of aggressive symptoms.

“When people say that COVID doesn't affect people our age, younger people, the simple fact of the matter is that it can,” Alsbrooks said. “One of my friends that went to the emergency room, I didn’t hear from her for about a week and a half, and that’s scary when you don’t know what’s going on.”

Dr. Edna Rehbein, a Chicano narrative professor at Texas State's Round Rock campus, teaches a class usually in-person but moved online due to the pandemic. Rehbein, a teacher for over 35 years, says getting to know her students is one of the most important aspects of her job. She was afraid going online would change that dynamic in her classroom.

“I wasn't teaching in the spring, but I started thinking about the fall semester as the [pandemic] went on and kept hoping that by fall we would be able to do face-to-face classes,” Rehbein said. “My class has always been face-to-face and is strongly based on student interaction and discussion.”

Not receiving feedback in a classroom setting, such as body language and even the occasional chuckle, would be different. She had to make changes. Over the summer, she learned to utilize technology for her class and encouraged student interaction over Zoom.

In a time of social distancing, interactions had become more important than ever, and Rehbein wanted to make sure her students were getting all that was needed.

“I don't know that all classes are great for this type of format, but I think I feel overall that it worked," Rehbein said. "We made it.”