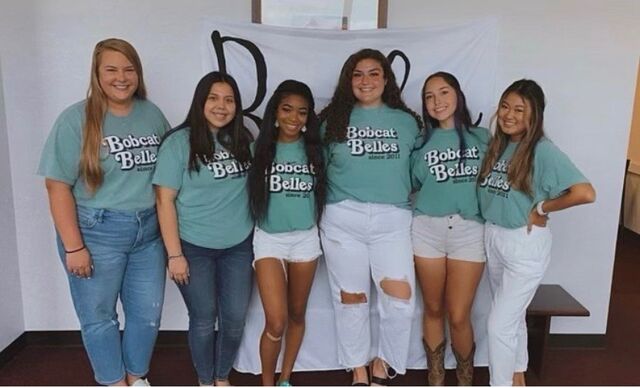 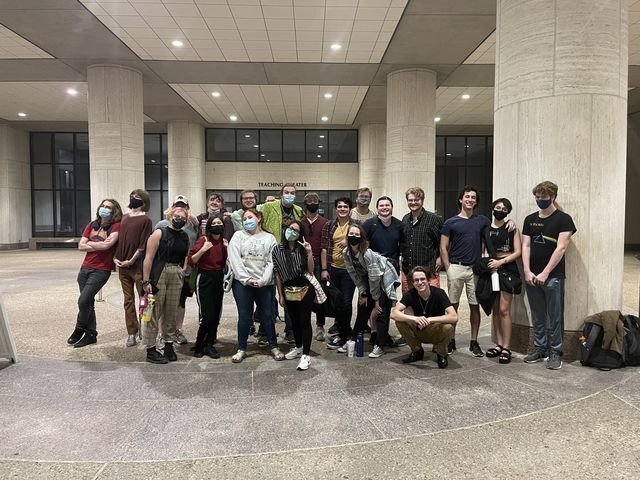 Texas State's Comedy Association pose for organization picture outside of the Alkek Library.

After almost two years of social distancing, capacity restriction and virtual connection, student organizations are boosting their involvement on campus but not without addressing the repercussions of COVID-19.

For student organizations that thrive on social interactions and follow the lead of an executive team, the pandemic impacted student member retention and the ability for organizations to recruit new members.

Bobcat Belles, a special interest organization that works with the Texas State football team to promote school spirit, recruits new members every fall. Bobcat Belles Vice President Tiana Lemon, a journalism junior, said COVID-19 made the organization's recruitment process more difficult than expected. When members did join, however, they weren't able to get the full experience.

A lack of involvement blocked the bond members could make among each other, which Lemon said was hard to experience last year as the organization's social chair. Members of Bobcat Belles could attend social events, such as roller skating, drive-in movie nights and other small gatherings. However, because of COVID-19, the events were optional and the members could opt-out of attending if they didn't feel safe.

“It was more difficult in planning, how we can have that, you know, bonding and that unity as an organization, how we typically do," Lemon said.

“We lost a bunch of people plus a ton of people graduated who had been really active, and we just didn't have that new base of like younger people," Hahn, a digital media innovation senior, said.

Comedy Association President Hayden Hartrick, a theater junior, viewed the limitations of COVID-19 as an opportunity to enhance the organization. Despite having to transition their comedy shows from in person to on YouTube Live, the organization continued to do what it loves, making people laugh.

"I've heard people that really struggle with being really nervous when they go into something and they feel like there's already pre-built friend groups, and kind of not having that I think is helping a lot with our growth because everybody gets to kind of discover, almost like we're a new club that already has some recognition,” Hartrick said.

While some organizations battled how they would sustain during the pandemic, others such as Advocates for Neurodivergence at Texas State (A.N.T.S.), were just starting out. A.N.T.S. was created in 2020 to support neurodivergent students but also students who live with mental illness or disabilities such as autism, dyslexia, ADHD and epilepsy.

A.N.T.S. Co-president David Ritch, a theater performance and production senior, said despite being established amid the pandemic, the organization was created due to the need for an organization that supports neurodivergence on campus.

“Whenever we first were getting started, we were nervous that nobody was going to come to a meeting, you know, before our first meeting, and we knew that we absolutely [had] no option to do it in person. It was the middle of the pandemic,” Ritch said.

A.N.T.S. started its first year completely online and communicating on a Discord server. Regardless of its small presence, Ritch said the group received many interested members.

“We needed to make sure that we were like, genuinely getting people interested in going to these meetings and people immediately were just like, yes, I need this club, I need to have people who share my experiences and are able to, like, voice, the things that other people don't really understand about,” Ritch said.

A.N.T.S. now meets in person every other week in the LBJ amphitheater Its meetings consists of helping members register with the Office of Disability Services, having debates on discussion topics, such as how neurodivergent students are treated or learning more about the common things members might have like ADHD or autism.

Because of the pandemic, some organizations could not sustain last year either virtually or in person. According to Director of Student Involvement Brenda J. Rodriguez, there are only 300 organizations registered, which is less in comparison to previous years. She said the reasoning behind this could be that some students involved in an organization were unaware of how to keep it registered.

“When you think back to in terms of the past year and year and a half of being virtual if you're a freshman, and maybe you were a new member to the group, but now you're [in person], and, you know, your officers graduate, and you may not know all the policies and procedures or processes to keep the organization functions [or] organization registered," Rodriguez said.

Both Bobcat Belles and the Comedy Association worried if officer positions in their organizations would be filled. Lemon explained that many of the members in Bobcat Belles never held any roles within the organization, which left them unprepared to take on leadership roles.

“When we had elections, a lot of people didn't run for positions," Lemon said. "We kind of just had a few of our like executive officers, like they just had it handed to them because, you know, they didn't have anybody running against them. We had to push, like, ‘oh yeah like you should, you should run’ we were encouraging people to run and kind of like breaking down what it is that we do."

“When it comes time for me to like retire from the Comedy Association, all I really hope that I will [have] done is cultivate an environment where the people that take over not only care about comedy, but like, deeply care about the comedians of the club," Hartrick said.

Correction: An earlier version of this article incorrectly stated that A.N.T.S. meets at the LBJ Teaching Theater, this has been change to the correct location, which is the LBJ amphitheater.