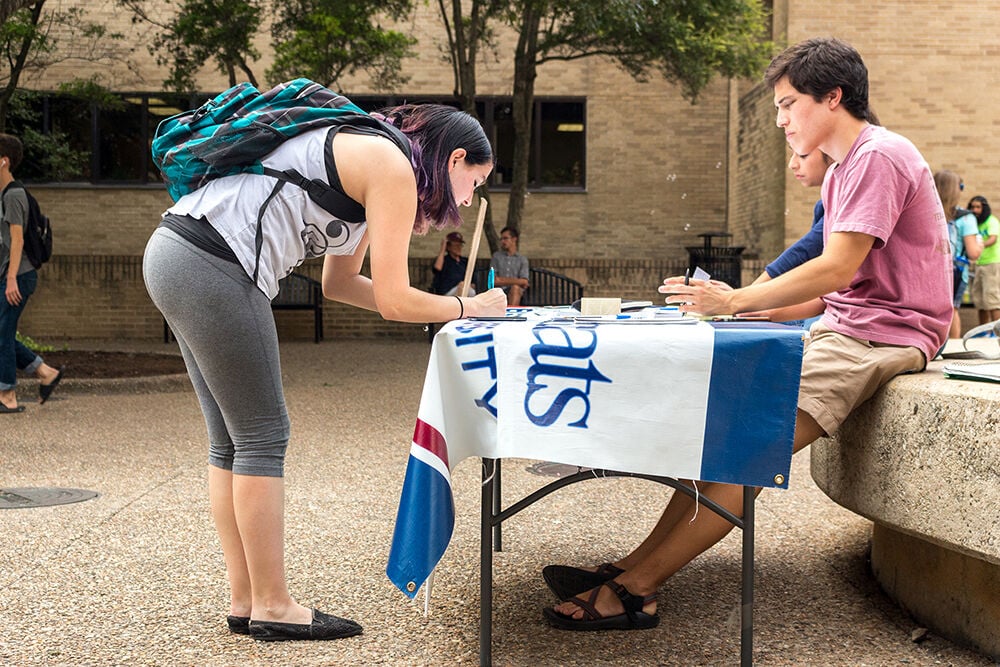 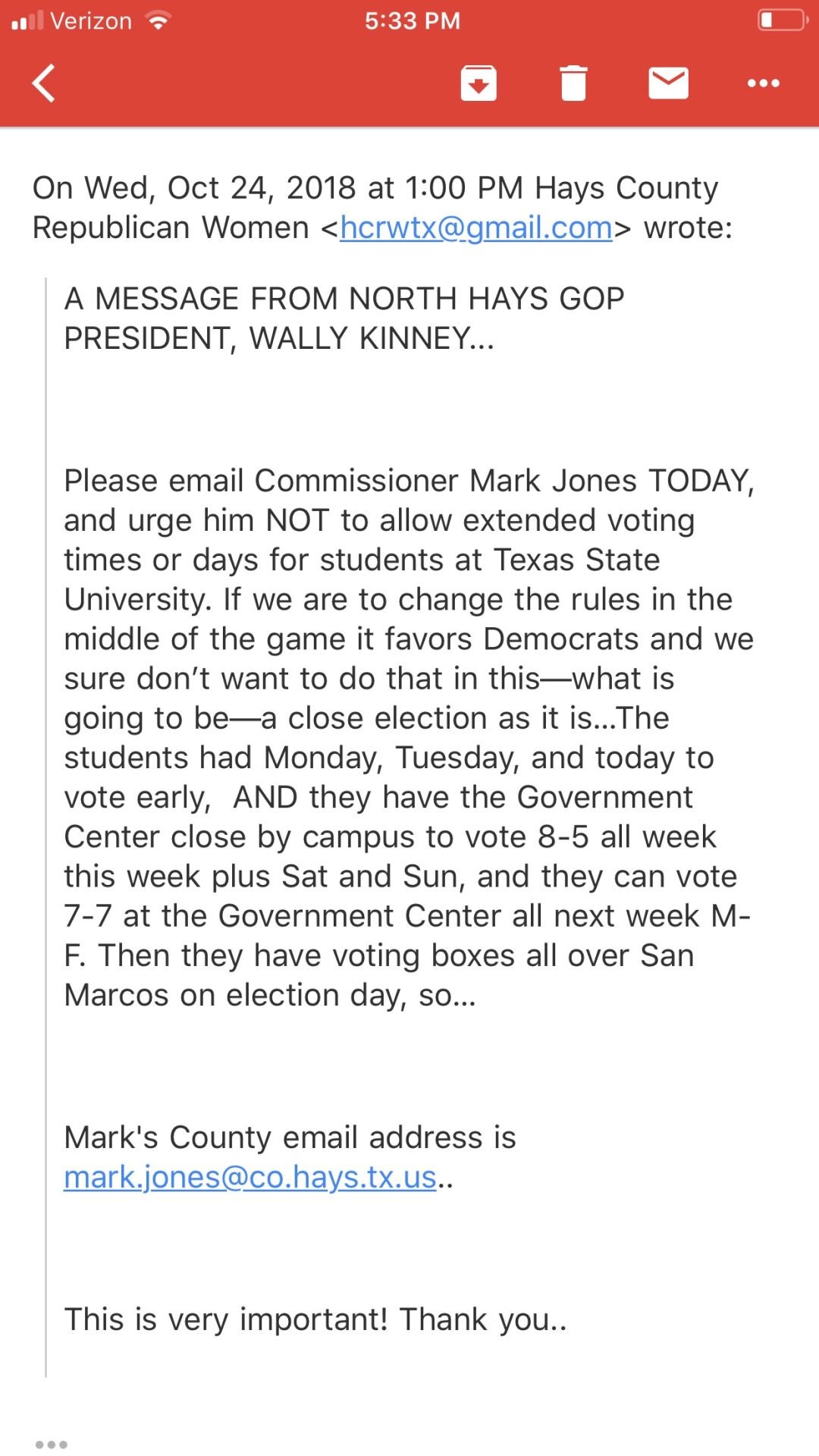 A screenshot of an email circulating on Facebook with North Hays GOP President Wally Kinney’s message against extending early voting on campus. 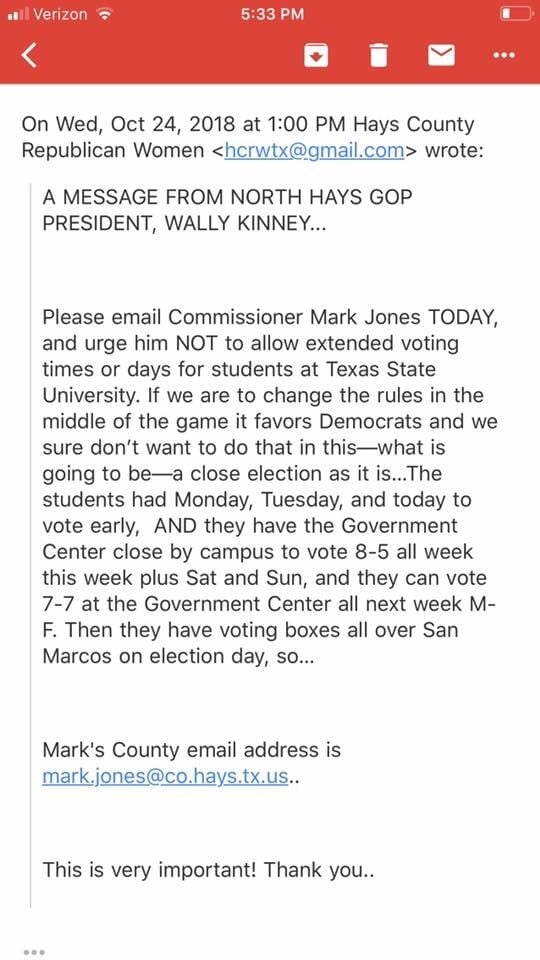 A screenshot of an email circulating on Facebook with North Hays GOP President Wally Kinney’s message against extending early voting on campus.

The Texas Civil Rights Project sent a demand letter Thursday on behalf of two Texas State students, the League of Women Voters-Hays Co and MOVE Texas Action Fund to Hays County demanding the on-campus polling location reopens for early voting and Election Day, claiming the lack of an on-campus polling location is a violation of both the Texas Election Code and the U.S. Constitution. The county is given until 12 p.m. today to comply or face a lawsuit.

The University Star will continue to update this story as more information becomes available.

Rides to the government center for Texas State students and San Marcos residents for early voting and Election Day will be offered by CARTS. A bus stop on Hopkins in front of Chimy’s and the small HEB is accessible from the Texas State campus.

The Hays County Commissioners Court issued a statement regarding the request for an extension of early voting on campus, claiming “due to the ‘public notice’ requirements for the branch voting schedule, extension of dates and times for any branch location is not practicable at this time.”

North Hays GOP President Wally Kinney stated in an email correspondence with The University Star that students had ample amount of time and opportunities to vote on campus during the designated days.

“I’m in favor of everyone having a fair opportunity to vote. That’s why I was in favor of having one ‘dedicated’ polling place for students on campus the first three days of early voting,” Kinney stated. “And that’s why I was in favor of some TSU faculty authorizing time for students to go vote . And that’s why I was in favor of CARTS offering free transportation for students to and from the Government Center to go vote. Students can vote at any early voting location in Hays County 8-5 M-Sat. this week and also 1 – 6 on Sunday. Then they can vote at the early voting locations next week M-F 7-7. They also will be able to vote on Election Day in their own precincts where they live. The city, county commissioners court, both political parties and other political subdivisions conducting elections this fall approved this schedule months ago. To change the schedule in the middle of the election is in my opinion wrong.  Since there was no apparent emergency, I urged my colleagues to oppose this change.   Therefore not only is there no voter suppression but there is more than ample opportunities for people in Hays County to vote – especially students who have much more flexible schedules than those voters who work 8 to 5.”

Several democratic candidates sent a letter to the commission asking for extended days and hours from Oct. 30 through Nov. 2, 11 a.m. to 9 p.m. Ten candidates signed the letter.

In the letter, Democratic candidates said they “have very serious concerns that the extended wait times are suppressing the vote, therefore limiting the ability of eligible voters from exercising their right to vote, as guaranteed by the United States Constitution.”

North Hays GOP President Wally Kinney is asking Hays County Republicans to oppose the extension of early voting on campus, stating “it favors Democrats and (they) sure don’t want to do that in this (…) close election (…),” according to a email screenshot circulating across social media.

Students, faculty and staff can email the following individuals with their concerns about voting and extending early voting on campus.

The University Star will continue to update this story as more information becomes available.

Police have extradited a suspect in the killing of a Texas State student-athlete to Hays County from Travis County following a Feb. 25 arrest.

The Hays County Local Health Department reports one new COVID-19-related fatality on March 4, a Buda man in his 50s. There have been a total of 225 fatalities in the county.

Texas State softball is set to host a round-robin tournament on March 10-12 at Bobcat Softball Stadium, a change from its previous plans to just host Sam Houston State and the University of Texas at San Antonio.

For new college students, the first weeks of classes consist of navigating a new campus and building relationships with like-minded people. Foster youth students, however, sometimes find themselves under more difficult circumstances, as college students with traditional family backgrounds ca…