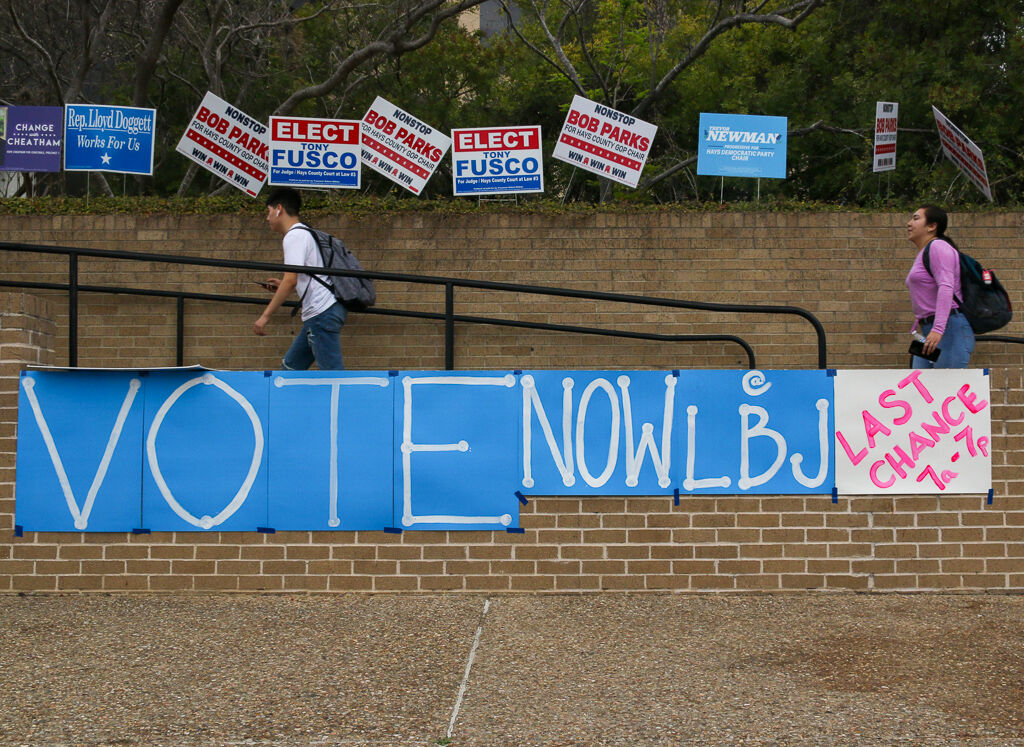 Texas State students walk past reminder signs about voting at the LBJ Student Center on Super Tuesday, March 3, 2020, in the LBJ Mall.

Chase RogersThe LBJ Student Center polling location is the second-most used in the City of San Marcos, garnering 13.54% of the vote on Election Day.

Long lines of students ready to cast their ballot stretched across the LBJ Student Center Tuesday, March 3, with some waiting for five hours before getting to vote for their chosen representatives.

According to voter check-in data from the Hays County Election Office, students were casting ballots for five hours past the 7 p.m. cutoff time, with the last voter check-in registered at 11:54 p.m.

Of the 49 polling locations in Hays County, the 10 voting machines from the LBJ Student Center were the last ones brought to the Hays County Government Center to be votes tallied.

Testimonials of students’ long wait times on social media prompted a response from MOVE Texas, a nonprofit organization that aims to register students on campus to vote, who provided pizza and water as an incentive to keep students waiting in line.

MOVE Texas is on the ground at Texas State ensuring young people stay in line to vote (two hours after polls were supposed to close.)

We’re buying pizzas, waters, & snacks to support young voters. Anything you give helps support the #YouthVote

Two days following Super Tuesday, Texas Civil Rights Project President Mimi Marziani addressed a letter to Texas Secretary of State Ruth Hughs to express “alarm over the widespread voter suppression our organization documented across the State of Texas during the March 3, 2020 Primary Elections,” later citing Texas State as one of the examples.

Rachel Stevens, dance junior, waited in line for over three hours and believes the county can do a better job to accommodate students attempting to vote.

“I think having a polling location on campus is a great accommodation for students, but I do think it should be improved upon,” Stevens said. “People need to realize how many students want to vote and put more workers, polling locations and more polling machines here on campus.”

According to Hays County Elections Administrator Jennifer Anderson, the long lines were a symptom of a majority of students arriving close to the 7 p.m. closing time and the length of the Democratic ballot.

The polling location was subject to deliberation during the 2018 midterm elections, then only maintaining a “temporary” status and facilitating only three days of early voting, excluding Election Day.

Anderson said students are better accommodated now since she has been in office, but she believes coordination with the university to educate students on how to prepare to vote could benefit wait times.

“Since I’ve been in this office, we now have a full-time early voting site on campus, and an Election Day site. Those are not things that we had in the past,” Anderson said. “Students learning how to prepare before they come to the polling location would be very helpful on Election Day, and it would help move things a little faster.”

“Now that the election is over, but still fresh in our minds, I have reached out to (Anderson) for a report on the process with our new machines,” Becerra wrote in a Facebook post. “I want to learn what worked and keep that going and identify growth opportunities and make adjustments where needed.”

Coverage and election results for Super Tuesday are available on The University Star’s website.