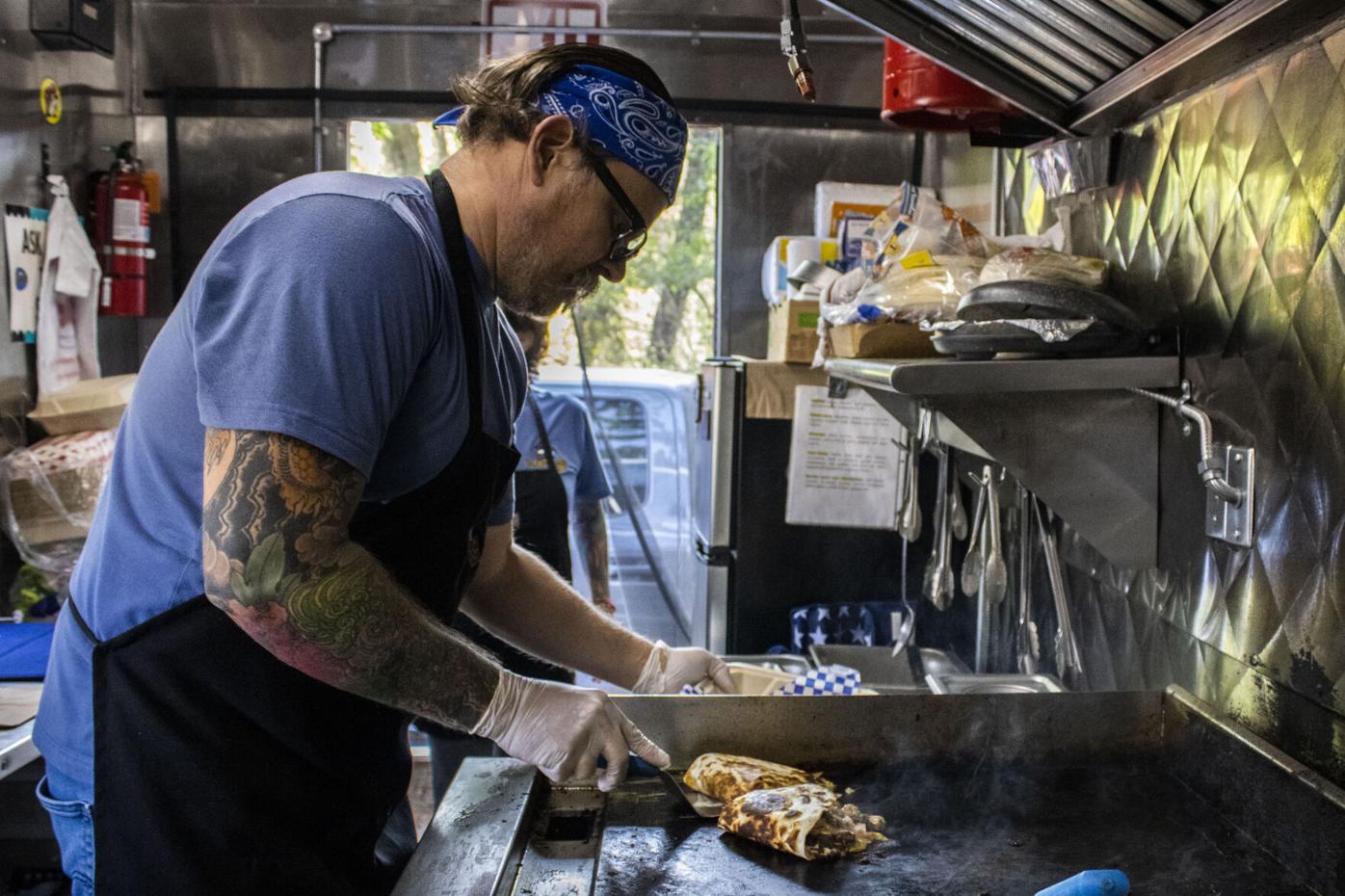 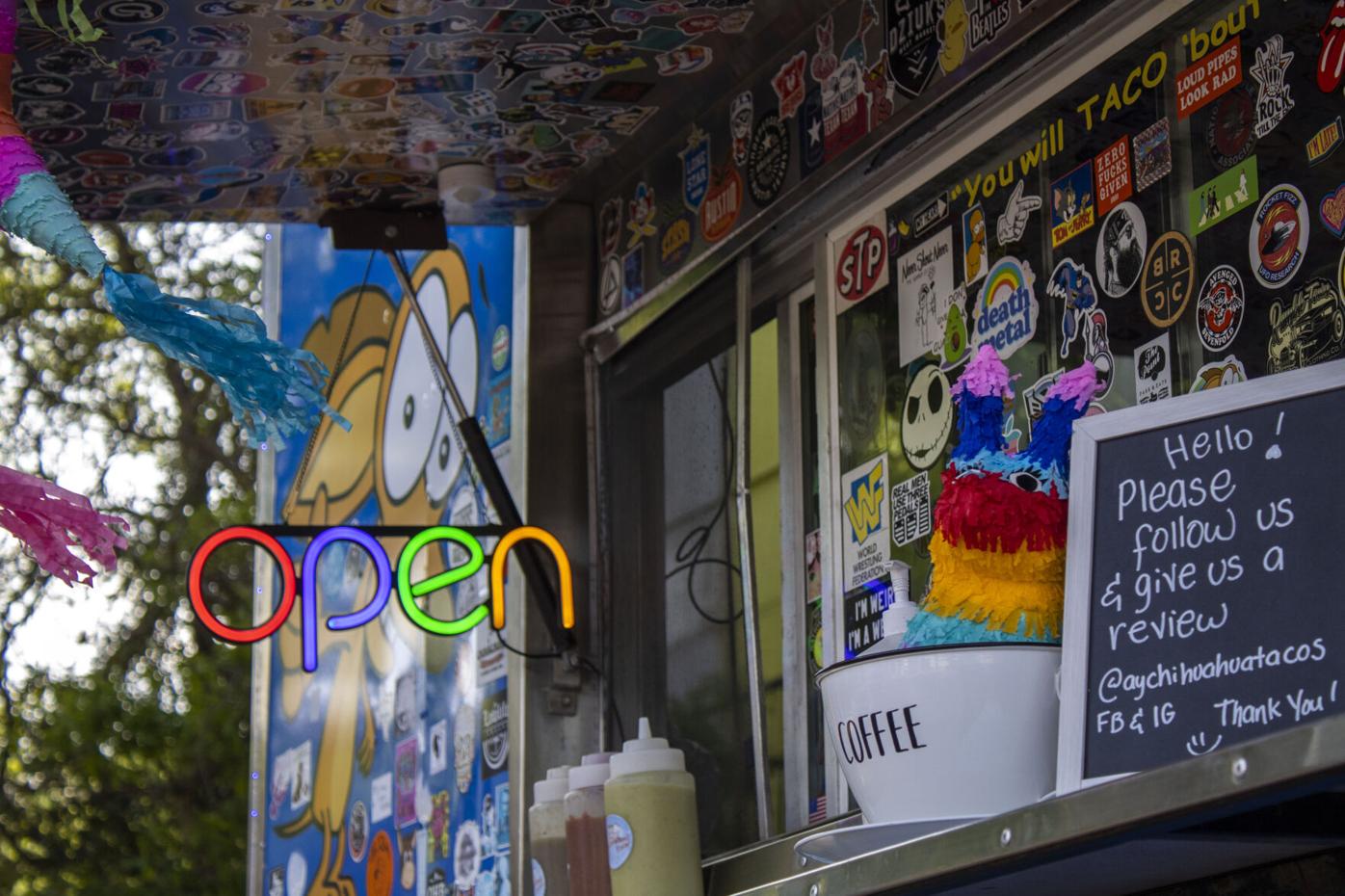 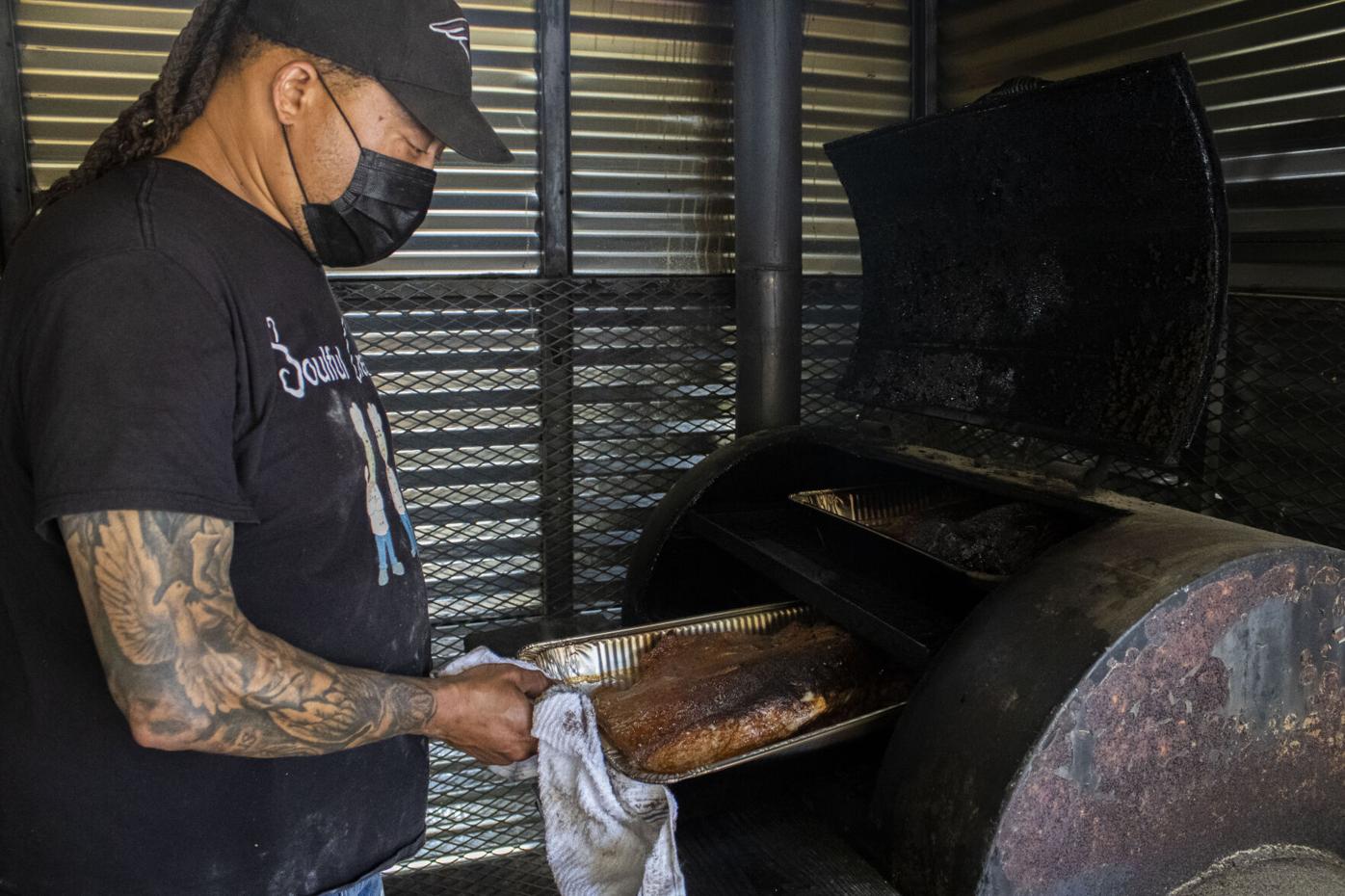 Soulful Creations chef and owner Willie Adams roasts a brisket in the back of a trailer, Friday, April 2, 2021, in San Marcos, TX. 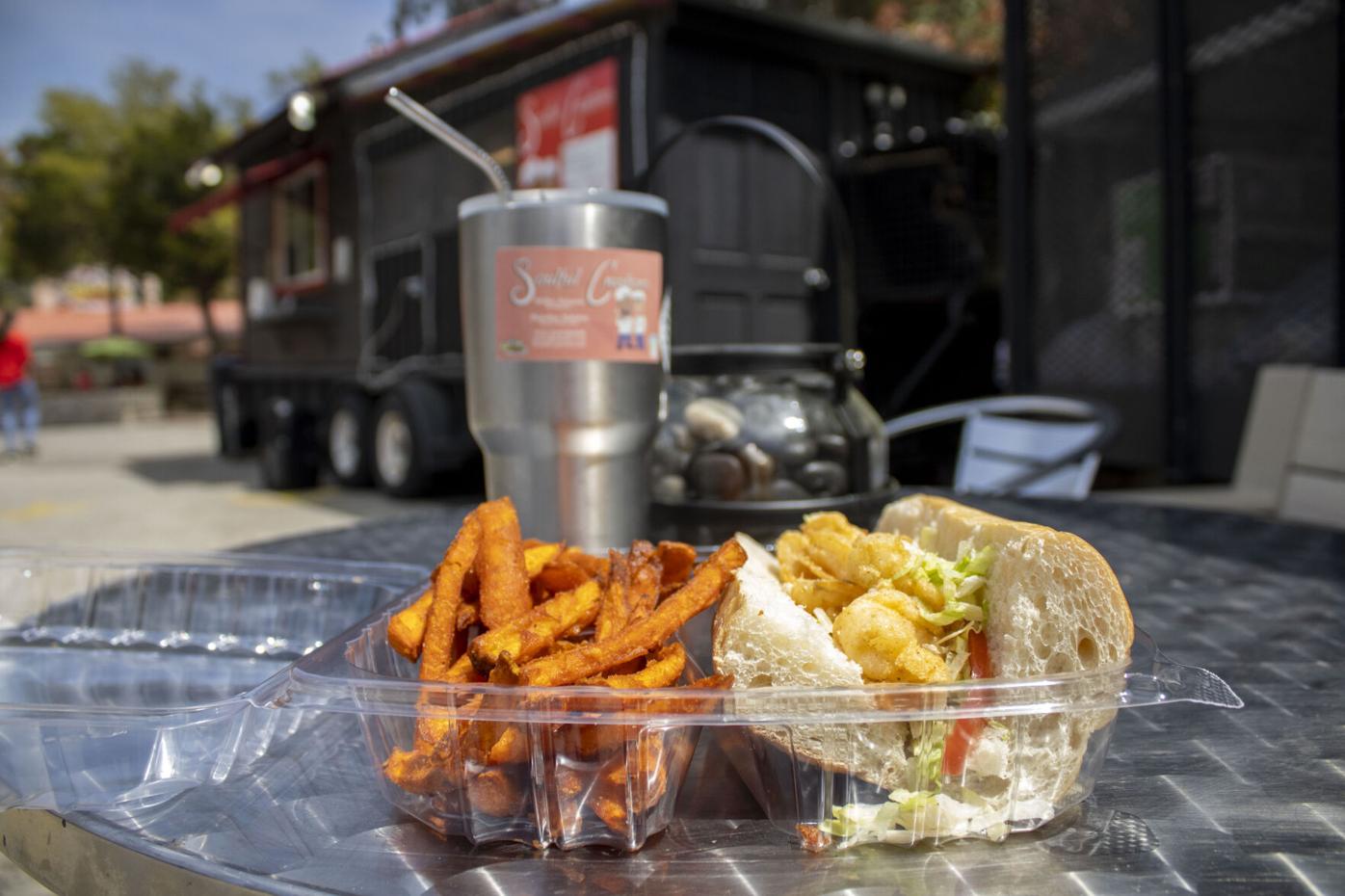 A short drive from Austin, a city recognized as “The Food Truck Capital of Texas,” San Marcos has its own food truck scene where street vendors pull from their cultural traditions to introduce new flavors to the community.

Sean and Venus Albert, co-owners of Ay, Chihuahua! Tacos, jumpstarted their food truck business five years ago after the couple decided to leave their 9-5 jobs to pursue their dream of serving authentic Mexican food. Sean Albert says he grew tired of not having a place to eat at that offered Mexican food from Mexico City, where he and his wife are from.

“It’s funny, though, because I’m a web designer,” Sean Albert says. “I had nothing to do with food or cooking, but I was so tired of nobody cooking [Mexican] food the right way.”

When Sean Albert was 2 years old, his grandparents owned a lonchería in Mexico, a Spanish snack bar with tortas and tacos. Sean Albert says the flavors were embedded “into his DNA” and were what led him to transform Ay! Chihuahua! into what it is today.

While he never imagined cooking himself, he was always interested in studying it. He would eventually refine his techniques to cook on a food truck flat top to create the best dishes for his customers.

“What we do is try to be a little more innovative, instead of going with the same [food] that everybody else has,” Sean Albert says. “Overall, we’re trying to bring more of the flavor from Mexico City.”

Originally based in San Antonio, Ay! Chihuahua! made the move to the Red Bus Food Park on Chestnut Street at the end of March. After COVID-19 hit, the Alberts felt like the city was getting too crowded. With less than 30 food trucks stationed in San Marcos, the Alberts decided they wanted a change of environment.

“The idea is to be here permanently,” Venus Albert says. “We like the place. We like the owners. We like everything here. So, hopefully, it’s a good thing for us.”

Ramika and Willie Adams, owners of Soulful Creations, say they spent a year and a half jumping around San Marcos until they found their permanent home at Wonder World Park two years ago.

In business for five years, Soulful Creations, the first soul food truck in San Marcos, originally served catering and pop-up events. However, after receiving positive encouragement from customers, the owners decided to purchase a trailer to allow Soulful Creations to expand and serve the community on a more routine basis.

When the Adams couple was working on their menu and operating pop-ups and catering, they began experimenting with barbecue and soulful sides. However, with a permanent location, they realized they could expand and turn the sides into entrees.

“Me being from New Orleans and my husband being from Mississippi, it just made sense to incorporate the things that we grew up on,” Ramika Adams says. “Once we had a location where we could settle down, we realized we really wanted to invite San Marcos to our culture.”

Soulful Creations has a set menu that consists of po-boys with shrimp, oyster, catfish and brisket. However, sides, like gumbo, are constantly rotated in to introduce San Marcos residents to different versions of soul food.

When someone walks up to Soulful Creations, the Adams couple likes to create a welcoming atmosphere with soulful music playing in the background, families reuniting outside and Willie Adams on the microphone urging customers to pick up food.

“It's like a community type of environment,” Ramika Adams says. “So when people come, I would love for them to experience our culture, hospitality and more importantly, our heart...then our food.”

Along with the food, Soulful Creations and its owners have made involvement with the community a number one priority. The Adams couple feeds the homeless, battered women and shut-in individuals regularly. They also host fundraising and catering events for the San Marcos and Texas State communities.

“A lot of those kids are from other places,” Ramika Adams says. “We have always wanted to be mentors for the college campus community, because we want people to know, especially the parents, ‘Hey, even though your kids are away from home, there's people here who care about them.’”

Ruben Garcia, owner of Texas Crab Co. on Aquarena Springs, also says the community has helped his food truck grow since opening in May 2020.

As a walk-up-only entity, Texas Crab Co. experienced success after opening during the pandemic. It allowed more people to get their seafood fix on the go instead of sitting inside a restaurant.

"This food truck trend took off where all the neighborhoods wanted food trucks there every week," Garcia says.

Garcia, a former general manager at multiple San Marcos eateries, has been in the restaurant business most of his life. As a family-owned business, Garcia and his son serve as the primary chefs at Texas Crab Co. Together, they serve up a menu that goes beyond crab food, selling various seafood options, such as shrimp, lobster, oysters, clams, fish, crawfish and po-boys.

“I just saw that seafood was just taking off,” Garcia says. “I had other buddies of mine that were selling seafood, but a different style. So I just started experimenting, trying it out and it went great. We never looked back.”

With Garcia's background in marketing, Texas Crab Co. has utilized social media to gain clientele. Since the food truck's opening, its Instagram has gained nearly 1,300 followers and its Facebook page has over 7,000 likes.

“We like to do a lot of giveaways for our social media following,” Garcia says. “Our customers are always down for us when we go back. We make sure we’re always promoting the times we’ll be out there.”

Texas Crab Co. has since expanded to serve cities like Lockhart, Seguin and Floresville.

“We have a second trailer that's coming out hopefully next month. Our goal is to have three locations by the summertime,” Garcia says.

Running a business was always a dream for Garcia. He wanted to utilize his own experience in and passion for the food industry to serve the San Marcos community.

"We got an awesome crew, and it's just a fun place," Garcia says. "Going on business for almost a year, we’ve never had to look back. We've really been blessed."