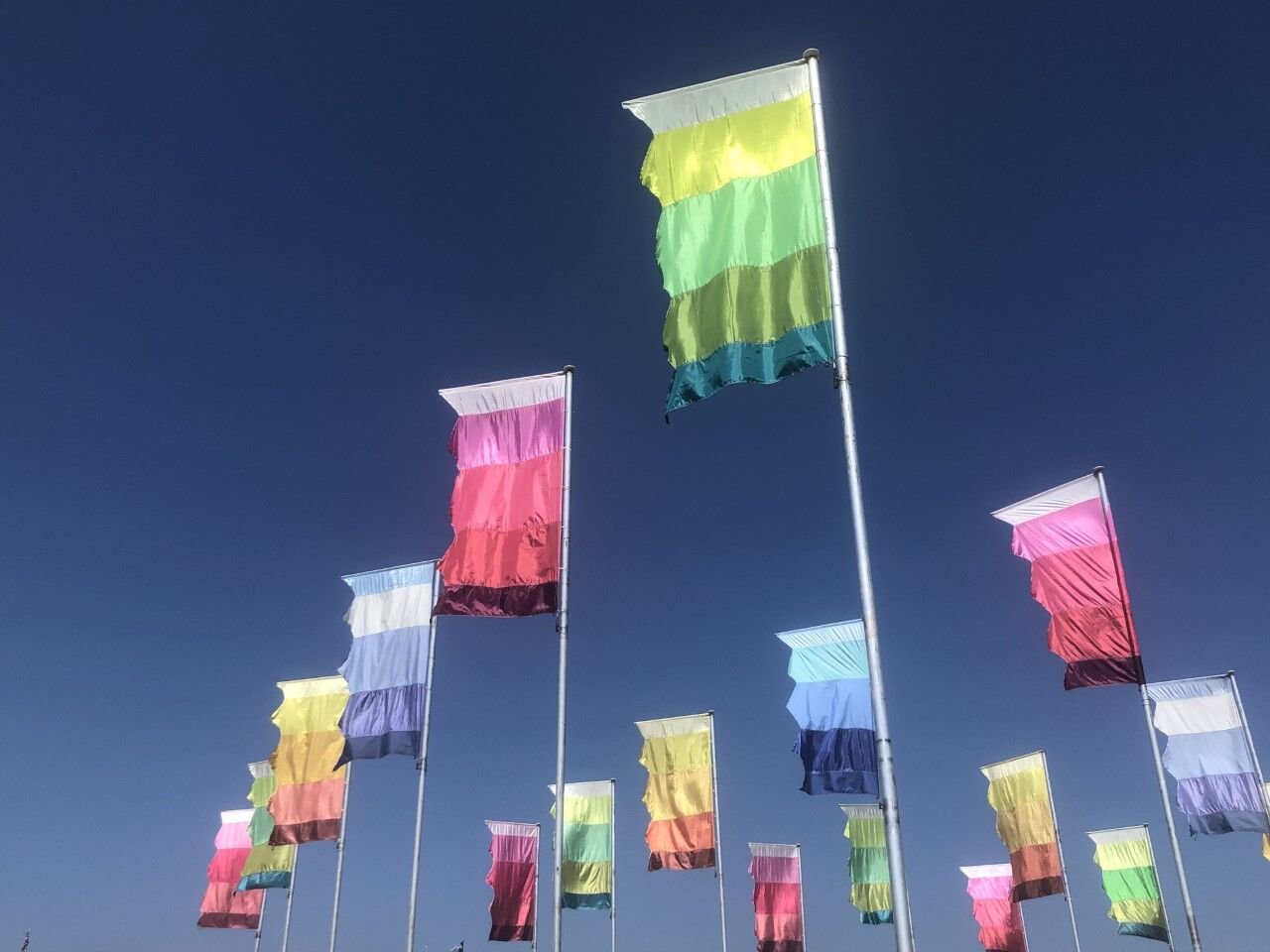 The ACL flags waving in the gentle breeze of day three. 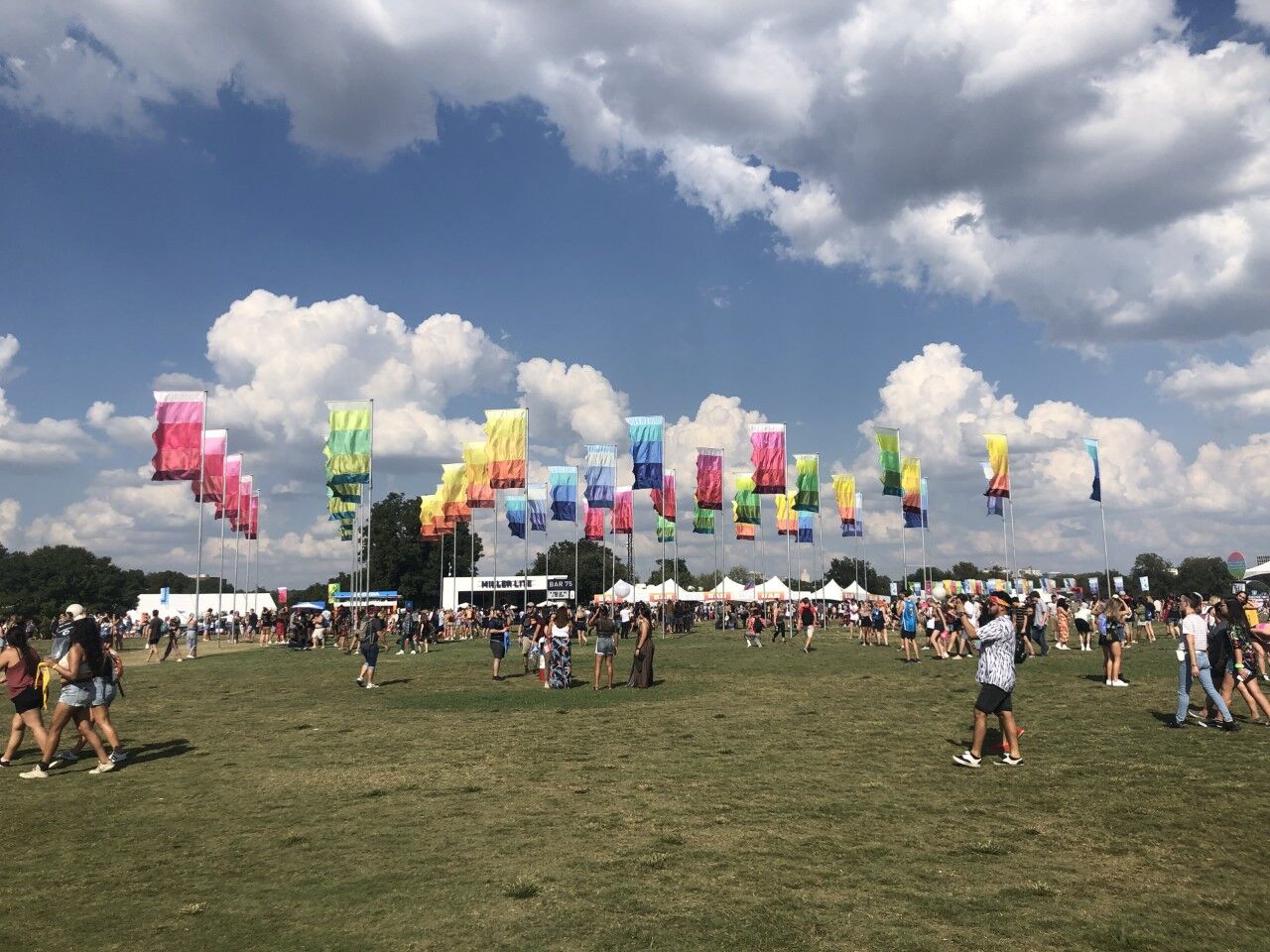 Zilker park decorated in the yearly trappings of ACL. 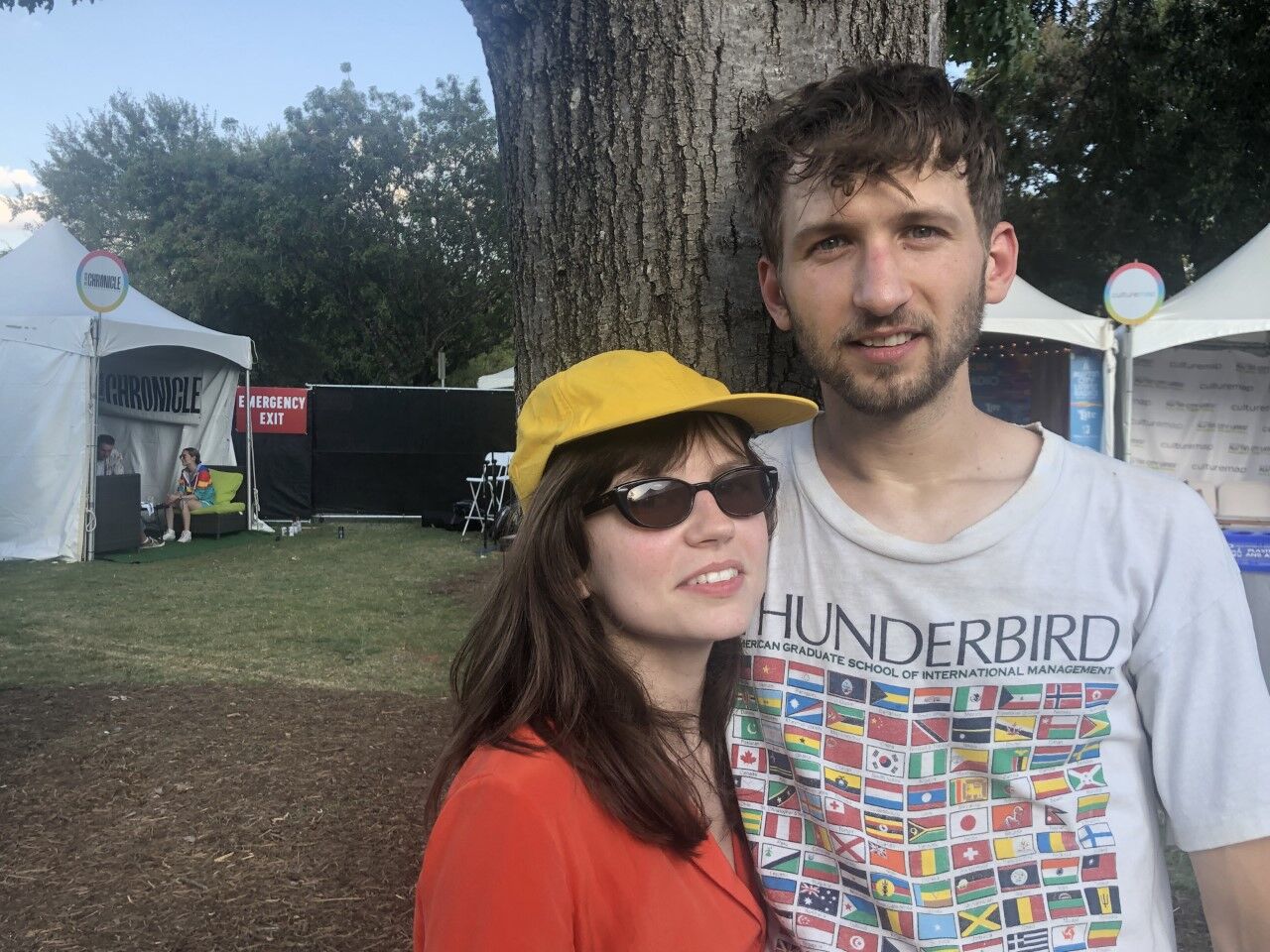 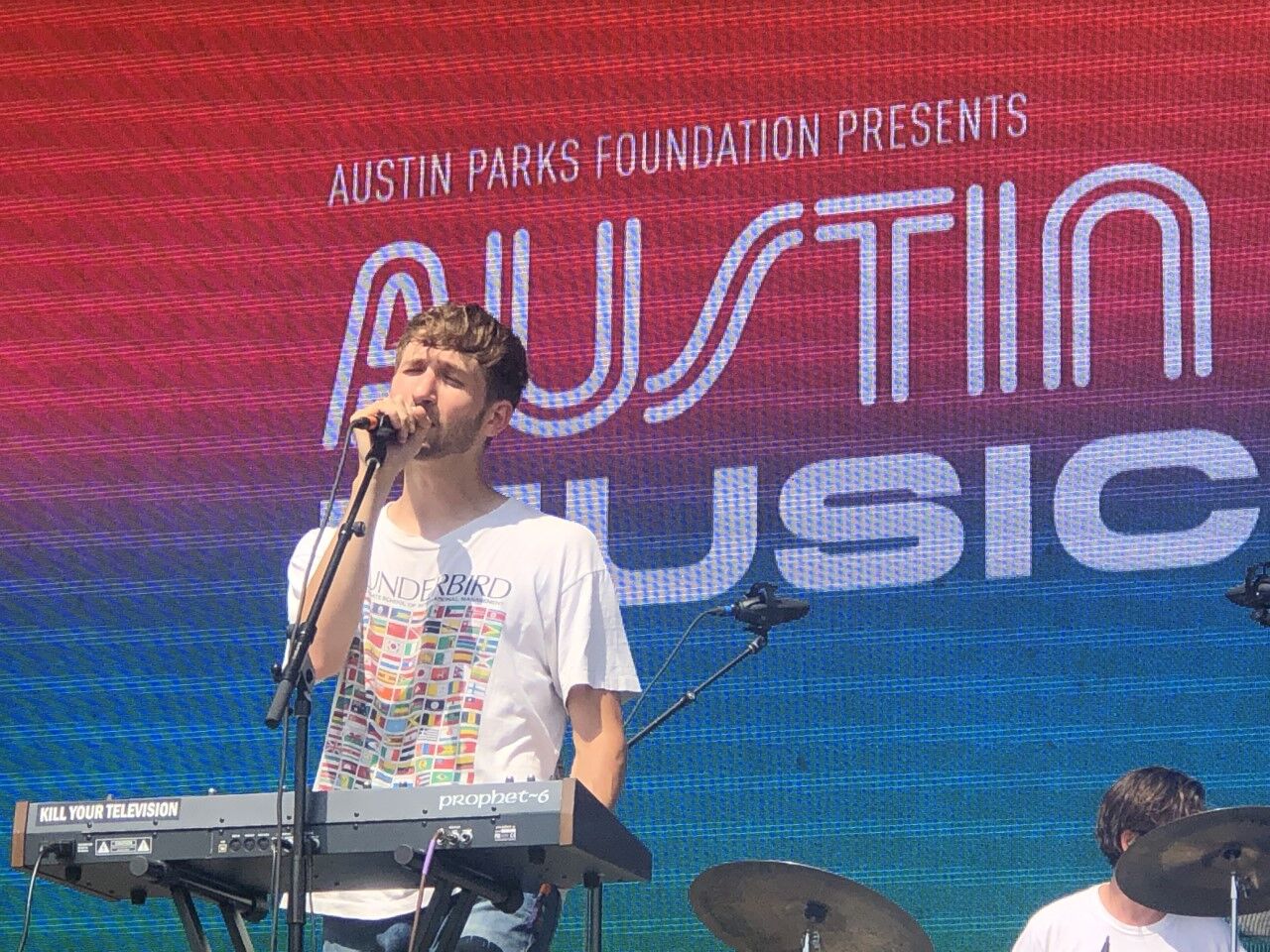 Tortoriello played keyboard and sang during their Friday set on the Miller Lite stage. 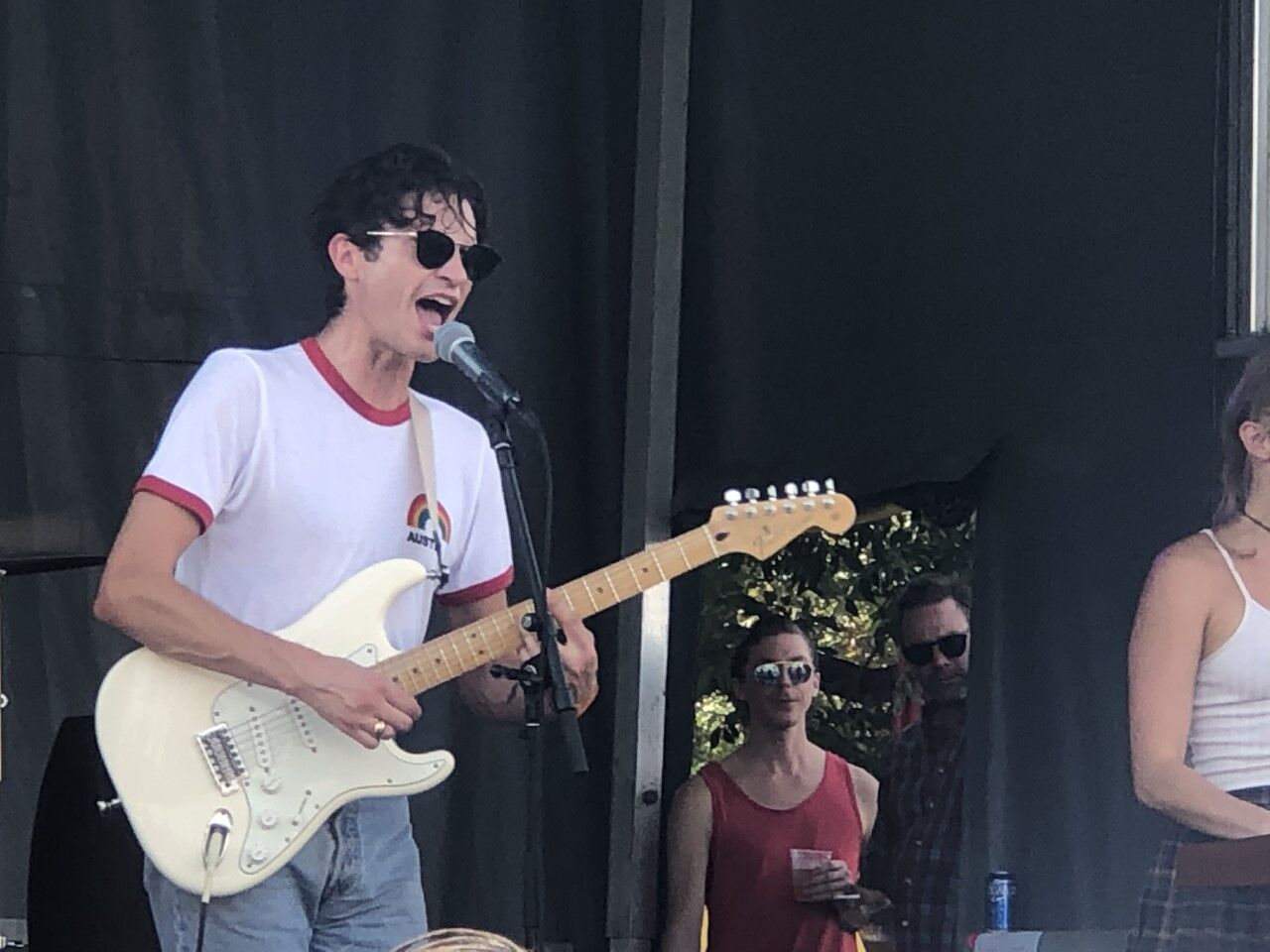 Hinman sings during their set on Friday at ACL not he BMI stage. 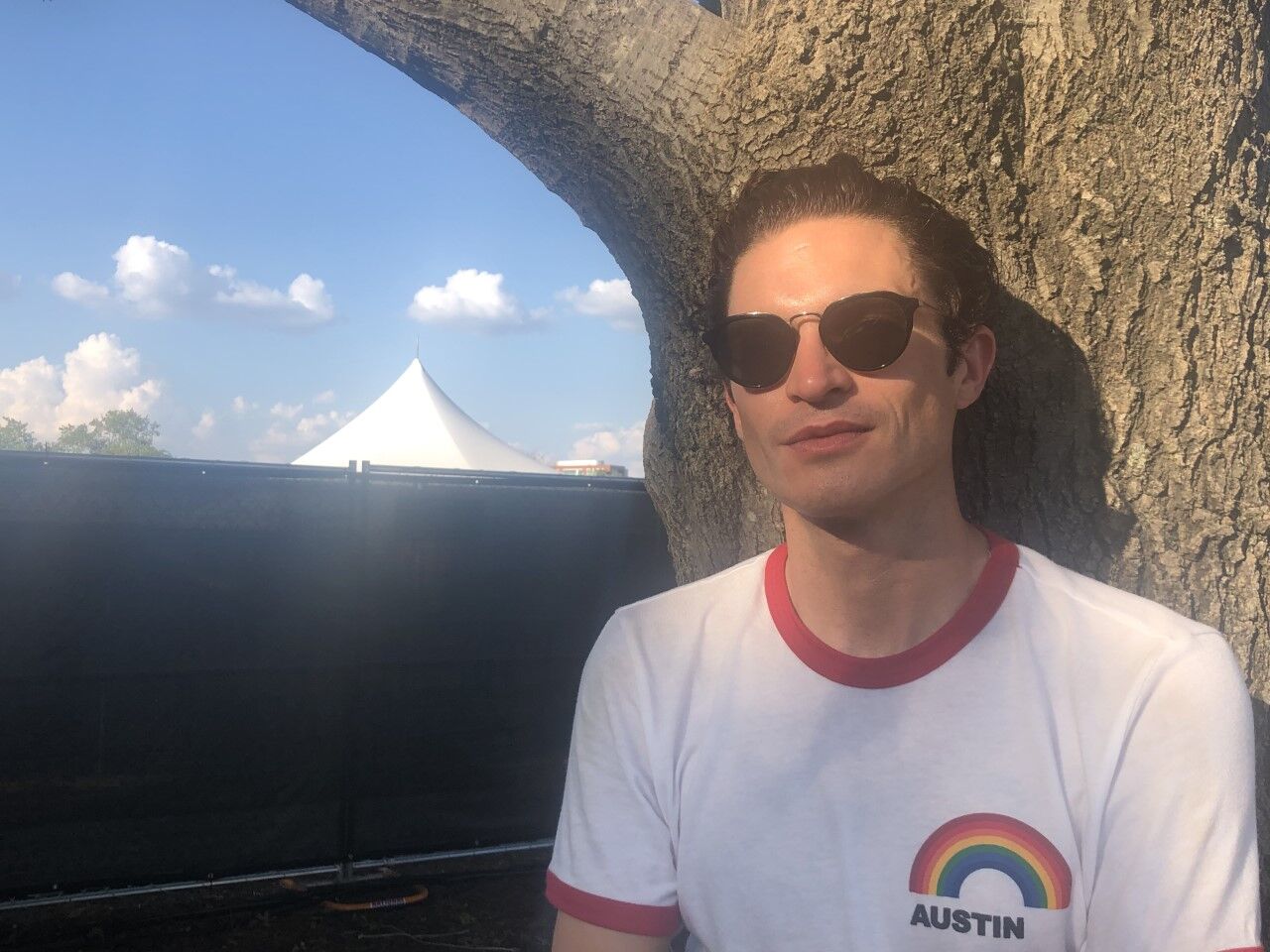 Palm Springsteen front man Nick Hinman smirks while posing against a tree in the press lounge. 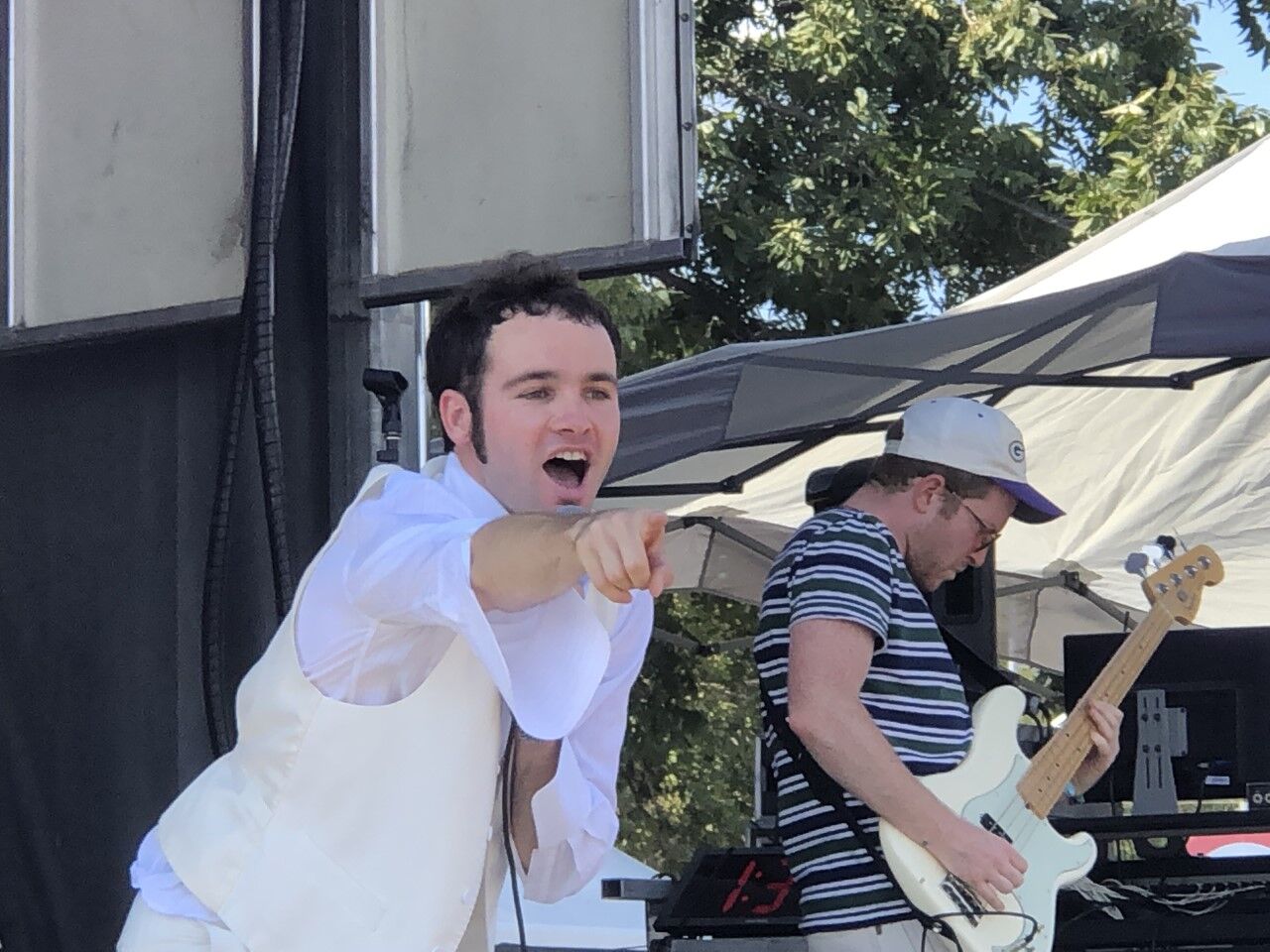 Blitzer danced onstage and pointed at the audience toward the end of the Saturday set on the BMI stage. 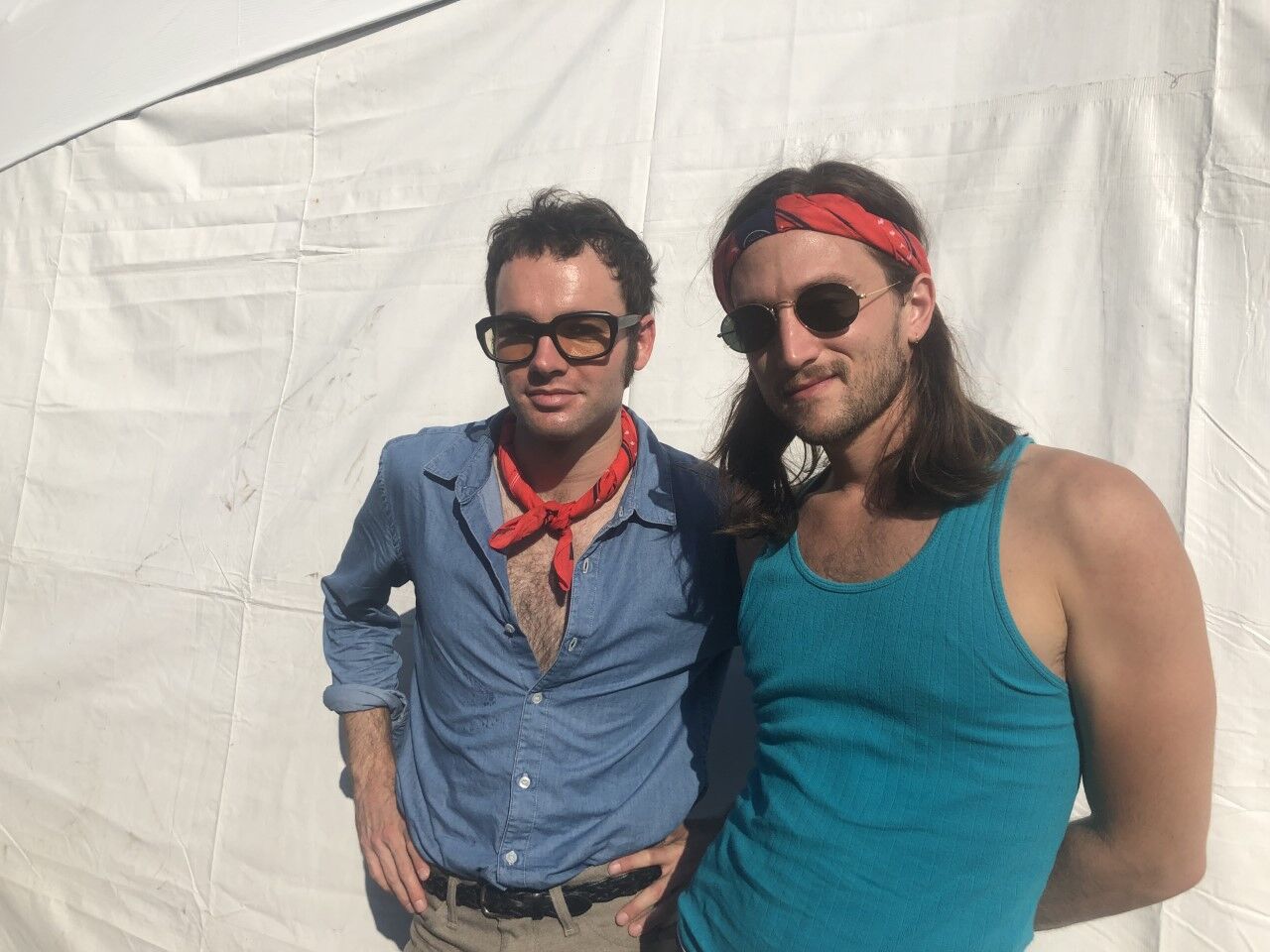 The ACL flags waving in the gentle breeze of day three.

Zilker park decorated in the yearly trappings of ACL.

Tortoriello played keyboard and sang during their Friday set on the Miller Lite stage.

Hinman sings during their set on Friday at ACL not he BMI stage.

Palm Springsteen front man Nick Hinman smirks while posing against a tree in the press lounge.

Blitzer danced onstage and pointed at the audience toward the end of the Saturday set on the BMI stage.

After two full days in the sun, Weekend One wound to a close with a gentler, folky, acoustic aura than the days prior. However, day three also promised hype, which it certainly delivered.

ACL day three got an early, loud start with singer-songwriter Kevin Garrett on the Miller Lite stage, grunge metal band Otis the Destroyer on the Vrbo stage and raw, heavy, alt-rock band cleopatrick on the BMI stage, all at 11:45 a.m.

With only two members, cleopatrick is loud, hard and doesn’t like being put into a box—at least that’s what their bio says.

Julia Jacklin performed on the Honda stage shortly after at 12:30 p.m. With her soulful, longing sound, the Australian artist filled the air with easy-to-hear quintessential festival music.

When moving across the vast expanse of Zilker park all day, pop-up lounges such as the “Hi, How Are You?” tent can feel like a godsend to escape the heat.

“Hi, How Are You?” Project volunteer Ryan Robbins said he hopes to destigmatize and normalize mental health issues.

“We’ve had such a great, positive response from everyone,” Robbins said. “It’s okay to not be okay.”

At 11:45 a.m., solo act Still Woozy, who records all of his music in his garage, took to the Miller Lite stage. 21-year-old Faye Webster, who doubles as a photographer, took over the BMI stage and The Japanese House, also known as English indie dream-pop artist Amber Bain, played the Vrbo stage.

Bain played many of her more popular songs like “Lilo” and a  serene acoustic version of “Saw You In A Dream.”

The Miller Lite stage saw a huge crowd for Bea Miller at 3 p.m. and 18-year-old Jamaican-born artist Koffee played the T-Mobile stage at the same time.

Koffee, whose real name is Mikayla Simpson, got into music via her church choir when she was just 12 years old. Her hometown, Spanish Town, Jamaica, faced a lot of violence during her formative years and as a result, Simpson speaks with wisdom beyond her years.

Her music has a bouncy reggae sound and she dedicated a few songs to “the queens,” “the lovers” and making the world a better place.

Five-time ACL attendee Caleb Galinas said he had never heard of Koffee until the festival but said she had a fun beat.

“(Koffee’s sound) makes me want to dance,” Galinas said. “It’s also very chill—I could just sit in the shade and enjoy it.”

Rebelution took over the American Express stage at 4 p.m. with powerful rock and big band infused reggae vibes, which made for an excellent follow-up to Koffee. The Californian band promised only positivity to ACL in their song “Good Vibes.”

Back on the T-Mobile stage, FISHER’s bass-heavy house music could be heard from half a mile away. FISHER started at 5 p.m. and had the audience jumping up and down for an hour.

Kacey Musgraves and Third Eye Blind competed for the crowd at 6 p.m. on the American Express stage and Honda stage respectively.

TXST Alumna and five-time ACL attendee Monique Fullbright attended day three specifically to watch Musgraves, Lizzo and Cardi B perform. She said the festival had been crazy in her experience.

“There’s good people-watching,” Fullbright said. “Kinda crazy on some of the outfits but it’s fun, it’s Austin and it’s what you’d expect.”

“It feels so good to be back home,” Musgraves said. “I want everyone here tonight to feel like they can be themselves.”

Musgraves encouraged the audience to get comfortable, get to know their neighbor and share some high fives. She sounded just as angelic in person as she does on her album, “Golden Hour.” Mixed into the audience were several people wearing cowboy hats in honor of the singer.

The road to see Lizzo was one of toil and hardship. 30 minutes before the show started, there were more people than places to stand and moving 10 feet could take up to 10 minutes.

Five-time ACL attendee Crystal Seeds said she appreciates Lizzo for representing women of all sizes and being herself.

“She’s so empowering as a woman,” Seeds said.

She came out wearing a neon orange bodysuit in front of a crowd so big, one could barely see the stage. She quickly brought out similarly-dressed background dancers and told the audience to get ready for “church,” just as Childish Gambino had done the night before.

After her second song, she introduced herself, her band and said even though the crowd was massive, she reassured the audience that she could see everyone in the back.

During “Jerome,” Lizzo asked the audience to turn on their flashlights and sway with her. Once the song was over, she defiantly flipped her stool and asked fans if they were ready to join the “Lizzo choir.”

“Tonight has been incredible y’all,” Lizzo said. “I used to think damn, I’m going to have all these people. That day is today. If I can do it, I know y’all can [sic] do it. I want y’all to continue to spread love.”

Before Lizzo’s energy had the chance to die down, Cardi B began her performance just next door at the Honda stage.

Mumford and Sons began their set at the American Express stage at 8 p.m. The band didn’t waste any time jumping into hits like “Little Lion Man” and “Babel.” They played with a complete set of instruments: guitar, banjo, keyboard, double bass and all.

Marcus Mumford, Mumford and Sons frontman, said the number of people in the audience was overwhelming.

“I don’t know if I could tell you how many times we’ve been to Austin,” Mumford said. “It’s starting to feel dangerously like home. There’s a familiar smell of barbecue and B.O.”

The band played a remarkable amount of songs from their debut album, “Sigh No More,” like “Roll Away Your Stone,” “Awake My Soul” and “The Cave,” during which Mumford requested that the crowd dance.

About halfway into the show, Mumford jumped into the crowd sans security. Just before performing the song “Picture You,” keyboardist Ben Lovett said the band felt grateful to perform on the same stage as Childish Gambino at one of the biggest festivals in the world.

“We realized how amazing it is to have tens of thousands of people come together and celebrate each other,” Lovett said.

Mumford commented on the talent of their fellow artists and said he wished he was watching Cardi B perform before he led into “I Will Wait.”

“I think you might have the best festival in the world here,” Mumford said. “We just want to say thank you so, so much.”

Weekend One has effectively drawn to a close, but there is still time to get tickets to see the bands of Weekend Two. Prices go up on Friday and you can get more information on ACL’s website.