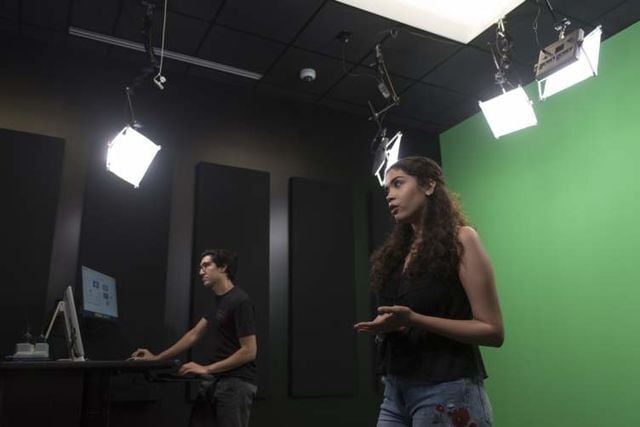 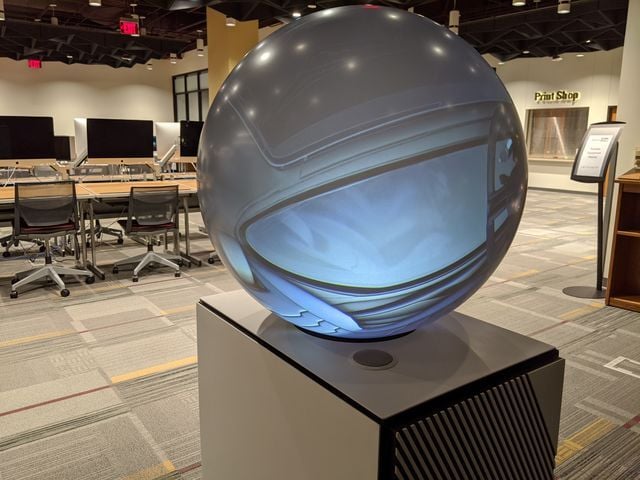 A PufferTouch globe, inside the GeoSpace, projects visualizations to an empty Alkek One at Texas State University. Alkek One is part of the $8.3 million Learning Commons Project, a series of renovations aimed at repurposing spaces in Alkek Library for students. (Ryan Scanlin)

After years of planning and roughly 20 months of renovations, Alkek Library has finally opened Alkek One—a technology suite for Bobcats to learn and create. However, due to COVID-19, its grand opening wasn’t as spectacular as employees once envisioned.

Located on the building’s first floor, Alkek One is a part of the $8.3 million Learning Commons Project, a series of renovations aimed at repurposing spaces in Alkek Library for students. Planning for the project began over four years ago with the intention of using the library space for high-end technology such as virtual reality and GIS systems.

Technologies featured in the space include 3D printers, 4K cameras, microphones and more. There are five different workspaces located in the suite: Maker Space, Design Space, Youstar Studios, Geospace and the Immersion Studio.

Deborah Pitts, Alkek marketing and promotions coordinator, has been a part of the project for most of its development, helping hire experts run the various technologies within the space. She says Alkek having to draw back its promotion of the space due to capacity limits has been odd.

“These guys have been working at this for so long, and it’s finally here; we’re so excited, but we can’t tell everyone to come look,” Pitts said. “We had to open with a whimper instead of a bang.”

Once the university announced its decision to conduct classes remotely after spring break, the opening was delayed. Alkek One held its soft-launch July 6 instead of its originally planned open house reveal in March.

“Someday we’re going to promote the heck out of it, but we don’t know yet when that day is going to be,” Pitts said.

Brianna Resendez, an Alkek One student worker and theater senior, has been working weekday mornings since it opened. Resendez says visitors have been far and few between.

“We’ve had a couple of people come down and check out equipment, but not really that many because of COVID,” Resendez said.

With the return of some in-person classes during the fall semester, Alkek is prepared for increased foot traffic. The library will be enforcing safety measures, such as limiting capacity and sanitizing contact surfaces.

Alkek Digital Literacy Coordinator Brittney Johnson has been working on the Alkek One project for over a year. She has been at the helm of the “micro-credentialing” program purposed to work in conjunction with Alkek One, which will allow Bobcats to receive training in the different technologies of the suite and earn credentials.

“We’re creating a community where we can build from and share with each other,” Johnson said. “We’re trying to fill the gap between college and career.”

Despite the soft-launch of the suite, Youstar Studio supervisor Kira Wright is optimistic about student creativity in the Alkek One space.

“Having a studio in the library, that’s open [to] use, I’m excited to see students take it to the next level,” Wright said. “I’m interested to see what YouTube videos, songs, podcasts come out of this.”

The Alkek One suite is open for student reservations and visits. All Alkek renovations are expected to be complete before the start of the fall semester. The main floor will house a Starbucks and a large mural.

For more information on Alkek One’s creative spaces or its a micro-credentialing program, visit the Alkek One website.

In her many years as a performer, musical theater Program Head Kaitlin Hopkins has learned through experience how overwhelming, emotionally taxing and stressful the life of an artist can be. Eight years ago, after witnessing her students seek help for stress-related health issues, she set ou…

Texas State women's sports have introduced 15 players for their 2021-22 rosters, leaving coaches optimistic about the future of their respective programs and excited to see what the next generation of Bobcats can accomplish.

Texas State baseball and men’s golf have solidified the first signings of their 2021-22 rosters.

Opinion: Student Government needs to get its priorities straight

Over the month of October, Student Government focused on removing its Parliamentarian Cody DeSalvo only to end up reinstating him soon after. Instead of playing petty politics, students' governing body should be focusing on what the current administration’s platform spoke of in February: Div…

Early voting for the San Marcos runoff elections will take place Nov. 30 to Dec. 4 in the city and on campus.