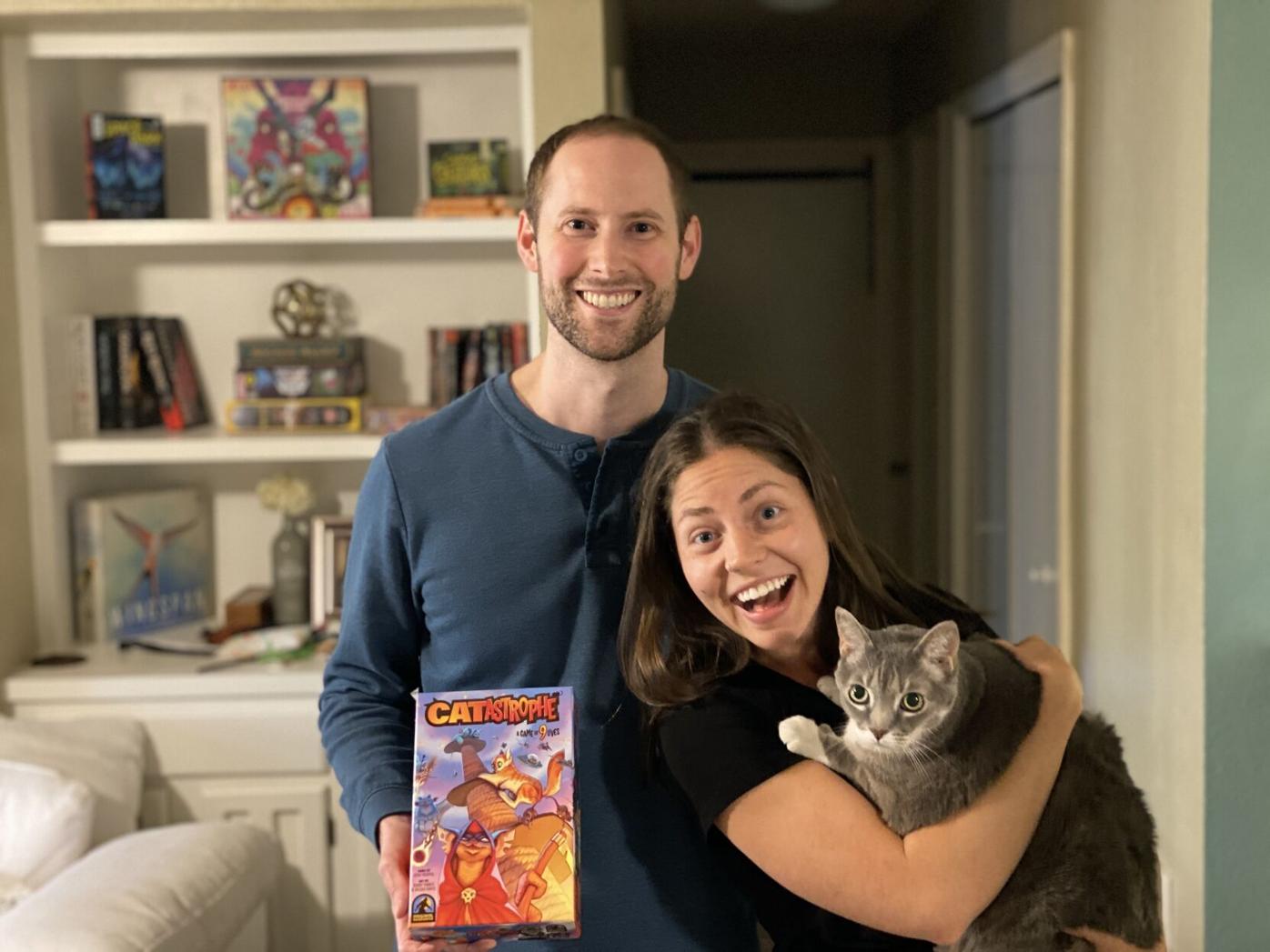 Josh and Abi Norris smile with their cat named Indie as they celebrate the launch of CATastrophe's Kickstarter, Tuesday, May 4, 2021. 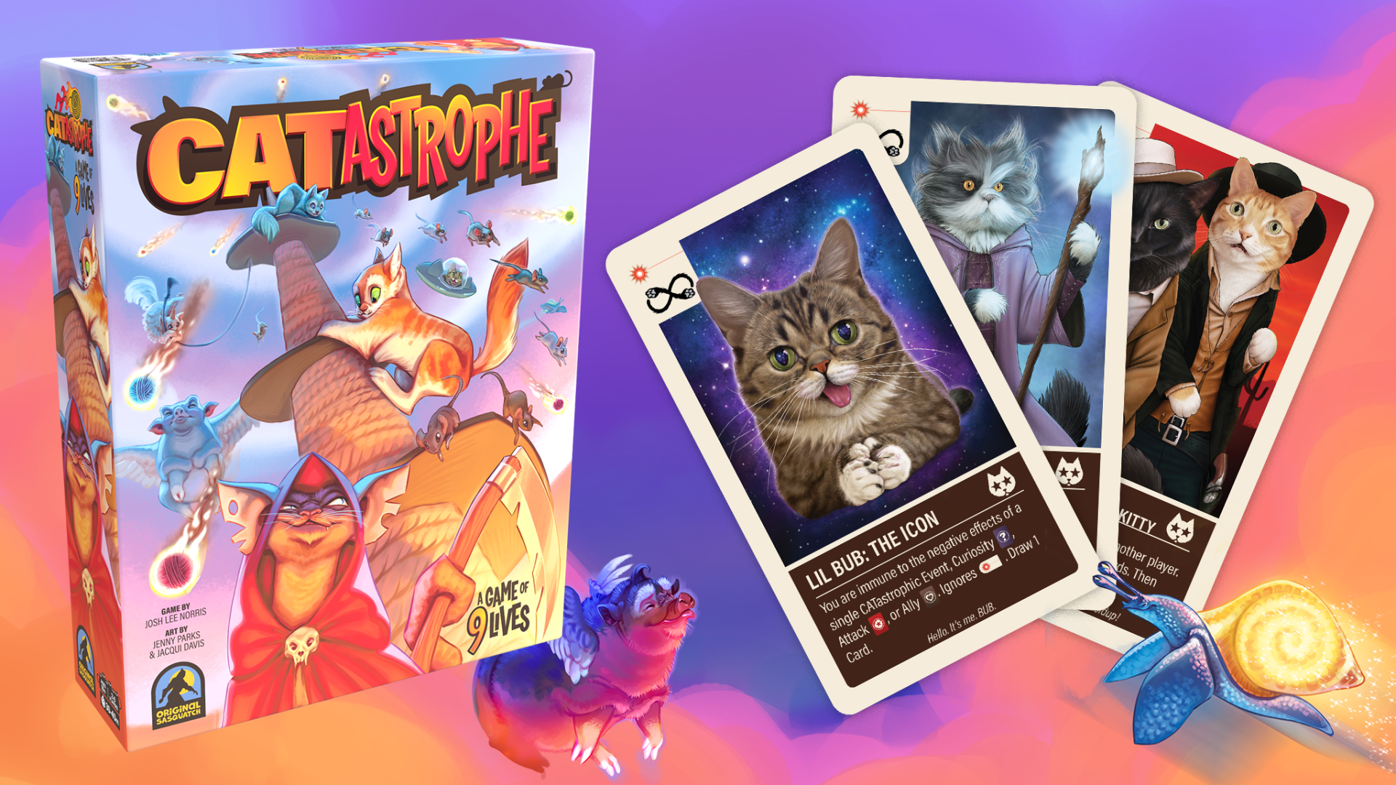 A promotional image for “CATastrophe” featuring Lil Bub, a character who passed away in 2019.

Board game fanatics and cat lovers alike will get the opportunity to take on the roles of some of the internet's most famous cats in the brand-new game, CATastrophe.

As players take part in a series of mini-games, the competition will decide who remains on top of the cat tower and who meets the Grim Reapurr. Along the way, players must remain wary, for this game is just as unpredictable as cats.

The idea for this quirky board game came to life when alumna Abi Norris' husband, Josh Norris, first brought the idea up in 2016. Produced by the Norris' San Marcos-based publishing company, Original Sasquatch, CATastrophe is a two-to-six-player family board game where each player takes on the role of a cat, battling other players' cats until their nine lives are up and just one player remains.

To add a fun twist, the cast of cats that players can choose for their avatars are based on famous cat social media pages, such as Hosico Cat and Molly and Monty Happiness.

As a communication studies alumna, Abi Norris promoted the game on social media platforms. From announcing the game's launch on Instagram to creating a cat page for the couple's own cat, Indie, Abi Norris says her education at Texas State contributed to CATastrophe's establishment on the internet.

"I took about just every public speaking class Texas State had to offer," Abi Norris says. "Through that, I just learned a lot about communicating with people for our company and our game. I run most of our marketing and social media and all of that. My time at Texas State really helped with that."

With this education in her pocket, she set up giveaways, Q&As, reposted reviews from different game publishing companies and set up interactive activities for the game's fan base while her husband worked on the game's production.

Josh Norris grew up surrounded by cats and, from a young age, was molded into a mega cat lover. In 2016, while a student at the U.S. Merchant Marine Academy, the furry creatures were still on his mind. He dreamed up the idea of a board game that incorporated his love for cats, and five years after thinking up the concept, he and his wife created CATastrophe.

"I have always enjoyed cats," Josh Norris says. "Whenever I came up with the idea for the game, [me and Abi] felt really certain that other people have a strong connection to cats as well and enjoy them — that they're a part of our lives, and you know, they're part of our families."

With this passion under his belt, Josh Norris teamed up with Chris Birkhimer, an English alumnus who he has known since childhood, to bring comedy to the game. Birkhimer’s contributions ranged from writing clever one-liners for each cat card to acting in CATastrophe’s Kickstarter fund promotional video.

During the early stages of CATastrophe's production, Josh Norris and Birkhimer ran through multiple versions of cat character cards, sets of rules and playtests. After some time, the game testing nights seemed no different than a fun-filled game night.

"I would help Josh gather a lot of people to test the game out and get their feedback. After, we always fed them pizza," Birkhimer says. "At conventions, we would have people sign up for an hour-long slot to come learn the game with me. So, I would run the game and then, you know, always have a good time."

To get commercial access to the more "famous" cats featured in the game, the couple packed their bags for Los Angeles to attend a pop culture event dedicated to all things feline: the 2017 CatCon.

Throughout the convention, the two shared their passion for the project with vendors and sponsors taking part in the event and unexpectedly met CATastrophe's future game artist, a key player in bringing the game to life, Jenny Parks.

"We did not really go to CatCon to find an artist, but we found this amazing artist, Jenny Parks, and what I wanted for the game, the idea in my mind — whenever I saw her booth and all of her art, it looked exactly what I was hoping for except 10 times better," Josh Norris says.

On May 4, Josh and Abi Norris launched a Kickstarter fund for CATastrophe with their goal set at $10,000. The couple feared they would not raise the funds by their deadline of June 4. However, Josh Norris' phone rang non-stop the day the Kickstarter began, blowing their worries out of the water. Currently, over $85,000 has been pledged to back the project.

"We had no idea people were gonna be interested," Josh Norris says. "And that's a really vulnerable, scary moment whenever you do that, and we were blown away, that in 29 minutes, we raised over $10,000."

Now, with a solid foundation of funding and unwavering passion gearing up for the game's April 2022 launch, the three friends are finally reaping the rewards of all their efforts. With less than a year to go before the game's physical release, the team remains hopeful and passionate about completing their journey.

"We're gonna take it one step at a time. We're gonna call somebody who's done it before, or we're gonna do some research, and [we’re] gonna figure it out as [we] go," Abi Norris says. "And if you can do that, if you can have that kind of tenacity, then you can accomplish anything, really. I truly believe that."