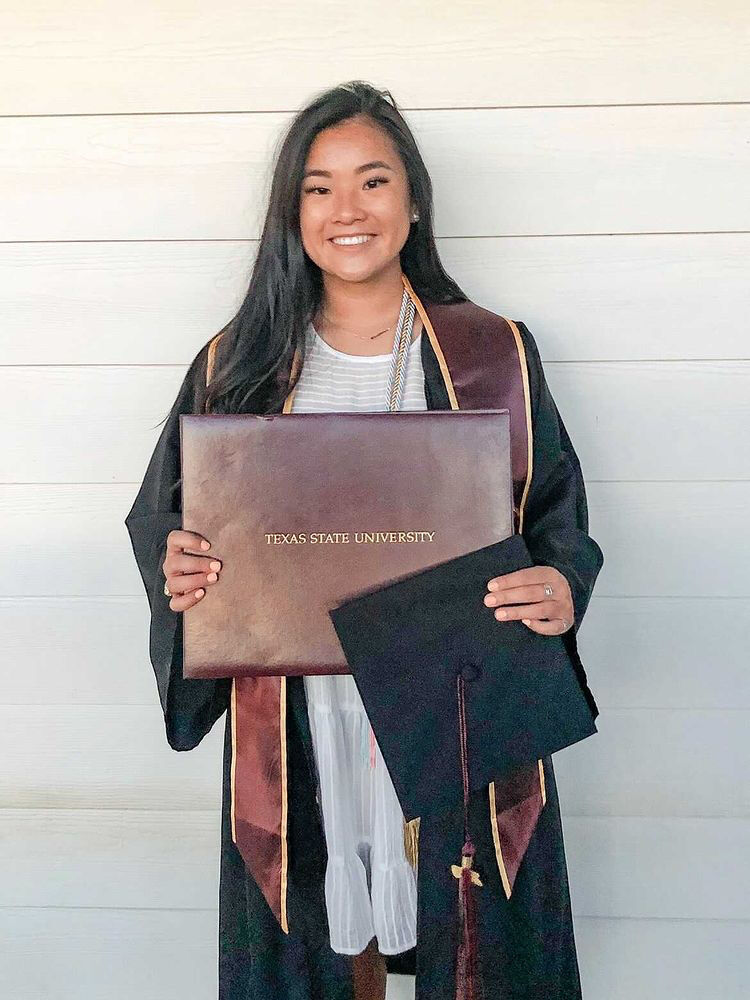 Texas State alumna Amy Matthis poses for a home graduation photo with her diploma in May 2020. 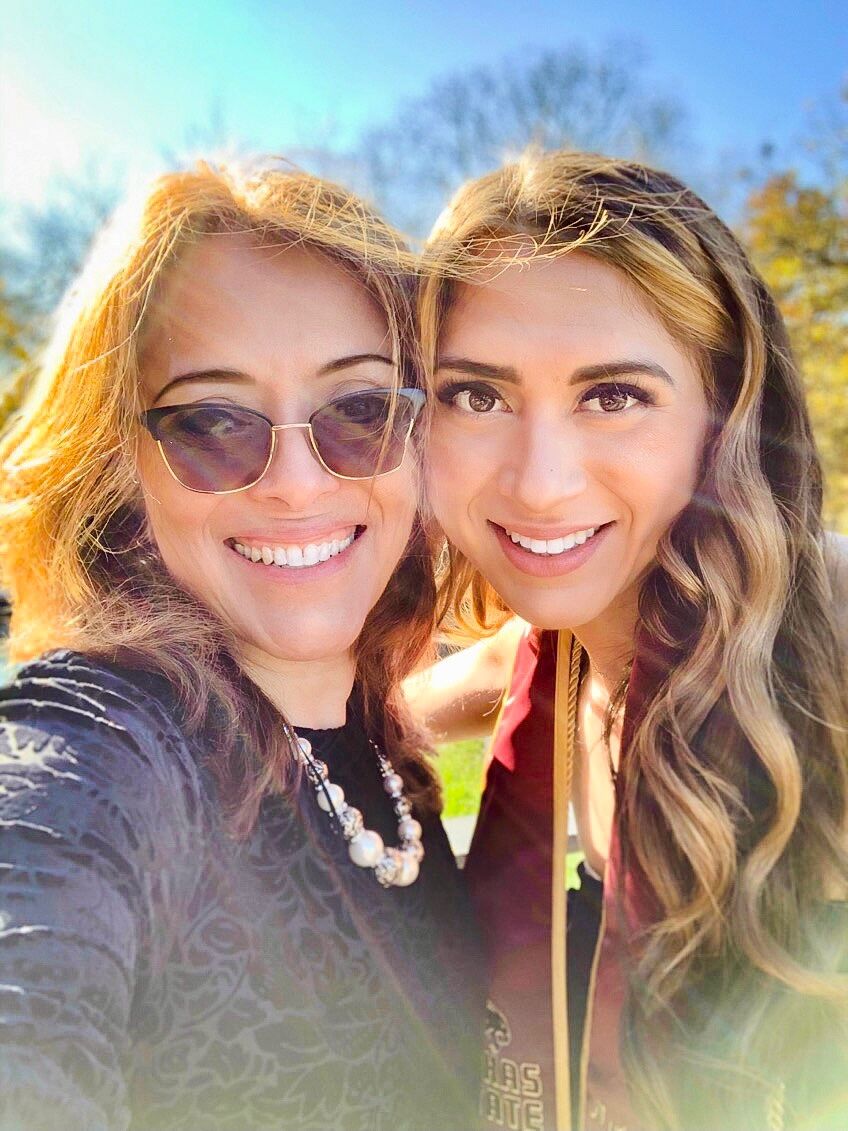 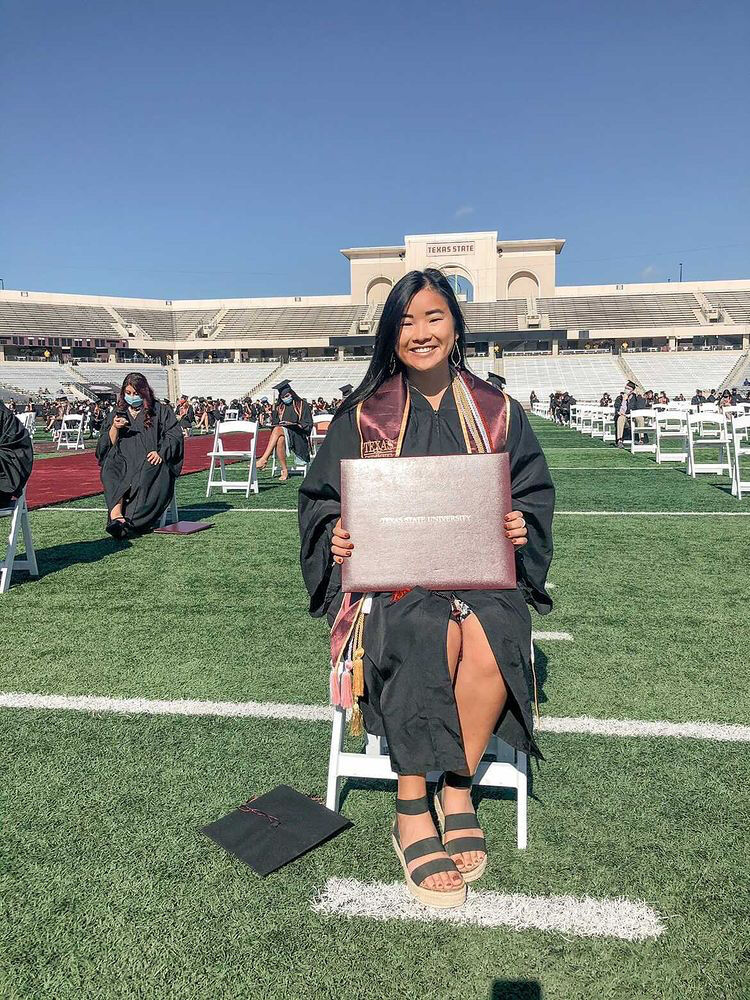 Walking across the commencement stage and participating in Texas State’s river jump tradition were two celebrations Amy Matthis looked forward to when first starting at Texas State in 2016.

“It’s really just a big happy way to celebrate what you worked so hard for all four years,” Matthis, a communication studies graduate, said. “Especially at Texas State, the river jump tradition — they talk about it at tours that you get at the university; it’s on pictures, slideshows and promotional videos. That’s such a huge moment that everyone looks forward to throughout their time at Texas State.

The socially-distant ceremonies, which were held outdoors in Bobcat Stadium at 25% guest capacity, required all graduates and guests to wear face coverings with seating pre-arranged.

Erika Kertz, a nutrition and dietetics graduate, says getting to experience an in-person ceremony marked an important milestone in her time at Texas State.

“My mom is a Texas State alumni, and she was always talking about how great it would be to go back to where she graduated so many years ago and see me graduate and take pictures by the river and do all those things, which you obviously can’t do on Zoom — it’s not the same,” Kertz said.

However, she wished more of her family could have attended the event to share the celebration of her commencement, as the university only allowed graduates to reserve up to four guest tickets.

“I could only bring four people which is really annoying because at the time I signed up, there were lots of empty spots and I had a couple other family members that didn't get to go and they really wanted to go, and so that was kind of annoying.”

The pandemic confined people to their homes and canceled most social events in an effort to adhere to newfound social distancing protocols. In May, President Denise Trauth made the decision to follow such guidelines and cancel spring and summer in-person commencement ceremonies.

Despite Brizendine's hope for an August ceremony, she was disappointed when the announcement of a second postponing arose.

“It was a little bit of frustration for sure, especially when it got closer and we found out that they were having football games, but they couldn’t have our graduation,” Brizendine said. “It was a lot of frustration but also trying to give grace because no one’s ever lived in this before.”

After receiving two different notifications for commencement delays, the possibility of an in-person commencement became an unlikely prospect for up-and-coming graduates. As a result, some students took matters into their own hands and found various ways to make the most out of the situation.

Like Brizendine, Matthis explained she felt the same disappointment when she heard she would not be able to walk the stage in May.

Still, Matthis’ family found a way to celebrate her accomplishments by reaching out to professors who played a vital role in her time at Texas State. Her family collected videos from each of her professors personally congratulating her.

“It was incredibly special," Matthis said. "I know a lot of people found their own ways to bring closure to their time at Texas State and celebrate."

In pursuit of NFL career, Haydel defies the odds

Never highly sought after but now in the driver seat of his future, Jeremiah Haydel is geared up and ready to take on the NFL with a full head of steam.