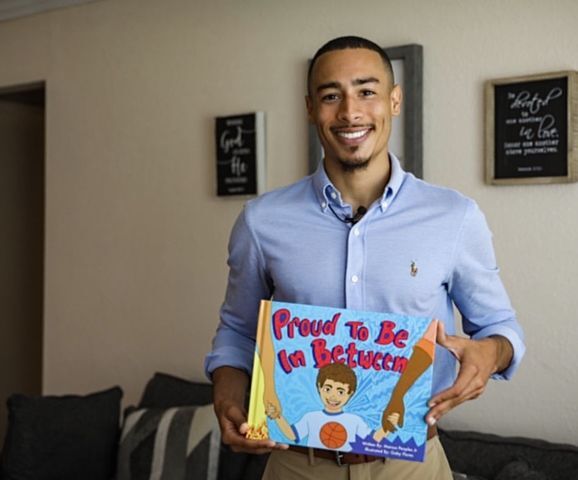 Alumnus and author Marcus Peoples holds a copy of his new children's book, "Proud to be in Between", which tells the story of a child born to interracial parents 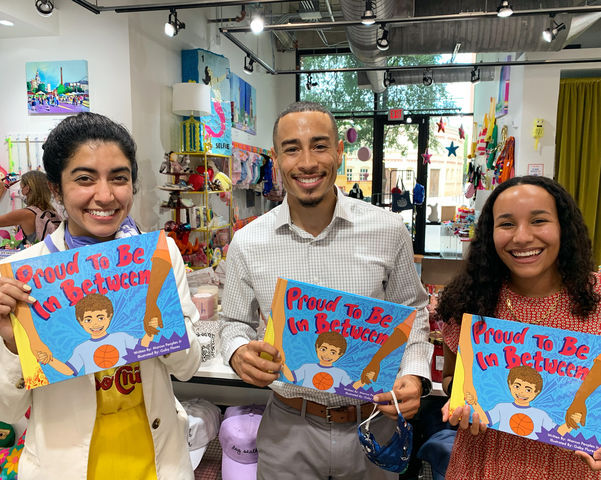 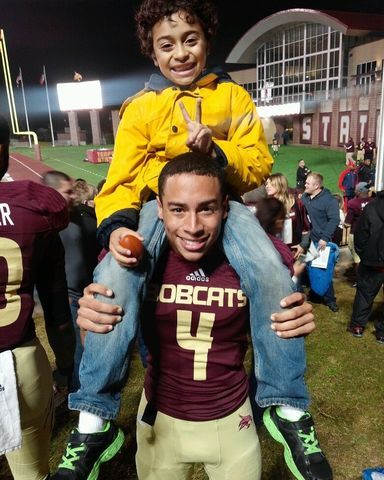 Marcus Peoples and his little brother, Logan, after a Texas State football game in 2014. Peoples played for the team his sophomore year of undergrad after he transferred to Texas State from Benedictine College in Kansas.

Scribbling out countless verses in piles of spiral notebooks, Marcus Peoples, a public administration alumnus, spent his years at Texas State crafting his language into what would become his first children’s book, "Proud to be In Between".

“This particular story started out as a poem,” Peoples said. “I actually wrote it while still in my undergrad, in 2017.”

Even in his time at Texas State, Peoples knew he wanted to help his community. For his graduate capstone, he focused on integrating released inmates back into society, working with the San Antonio mayor to reach standards high above the work expected of him.

“Marcus was a bright spot in the classroom,” said Patricia Shields, Peoples’ graduate director. “In an indirect and effective way, he persistently and kindly reminded the class that their project could make a difference, and they should not be afraid of studying hard problems.”

Peoples continues to reach for higher goals with the publication of "Proud to be In Between", a book he wishes will strengthen children’s awareness of their cultural identity. As a child of interracial parents himself, he hopes sharing what his parents taught him will inspire kids to learn how to embrace where they come from.

“The most important thing is to belong,” Peoples said. “And you can’t necessarily do that if you don’t have the tools in front of you to be able to share with people where you came from.”

Peoples believes those tools come from an open dialogue between parents and kids about their cultures. Although written as a children’s book, many parents have scoured the pages, accepting that they need to start talking to their kids about race.

“Many parents have reached out to me, saying they’ve been ‘beating around the bush’ with these types of discussions,” Peoples said. “It’s so important for parents to normalize these types of conversations.”

Growing up, his parents always held an open dialogue with Peoples and his brother. With a Puerto Rican mother and a Black father, he learned he was not limited to just one part of himself but that he could explore every part of his aspirations, past and culture.

For Nadia Grajeda, who works at a local bookstore where "Proud to be In Between" lines its shelves, this is the exact kind of book she says she will select in her elementary classrooms. She was entranced by the cover of the book and even more inspired when she opened it to see the important message it would teach children.

“I love that this book teaches those who are reading it that it’s okay to be who you are,” Grajeda said. “That you should be proud of where you come from.”

After years of emails following graduate school between Peoples and his past adviser, Shields also purchased a copy of the book for her interracial grandson. She loves the relationships explored within the pages and hopes when her grandson is old enough to read, he’ll learn from Peoples’ words.

“It explores the world of interracial families in a way that shows how love and family come first,” Shields said. “And how, within that world, differences are embraced.”

After seeing this positive response from children, parents, teachers and grandparents, Peoples continues to strive to inspire his community. He plans on releasing a second book that dives further into the realm of identity, which he believes, as his parents told him, comes from the heart.

"'It’s not about race for us, it’s just our hearts,’” Peoples said.

Now more than ever, Peoples believes if individuals stop, think and listen to their hearts, they could gain so much perspective. With COVID-19 restrictions keeping more people inside, he challenges his community to use this extra time for their benefit.

“It’s okay to sit still,” Peoples said. “Sit and think, think a lot and then think some more. You’ll learn so many lessons if you just sit down and observe.”

Throughout the summer, Peoples has taken time to think while at home in San Antonio, surrounded by his dog and his partner. It was in this time of thinking that he came across a historic South African word, “ubuntu”.

“I am who I am because we are who we are,” Peoples translated.

Peoples believes knowing where one comes from, trusting one's past and celebrating one's individuality is the key to happiness—the key to ubuntu.

Through the pages of "Proud to be In Between", he hopes ubuntu shines through and that those who turn the pages learn they are not limited by society for they can create their own path.

For more information about Peoples' upcoming community projects, visit his Instagram or "Proud to be In Between"'s website.