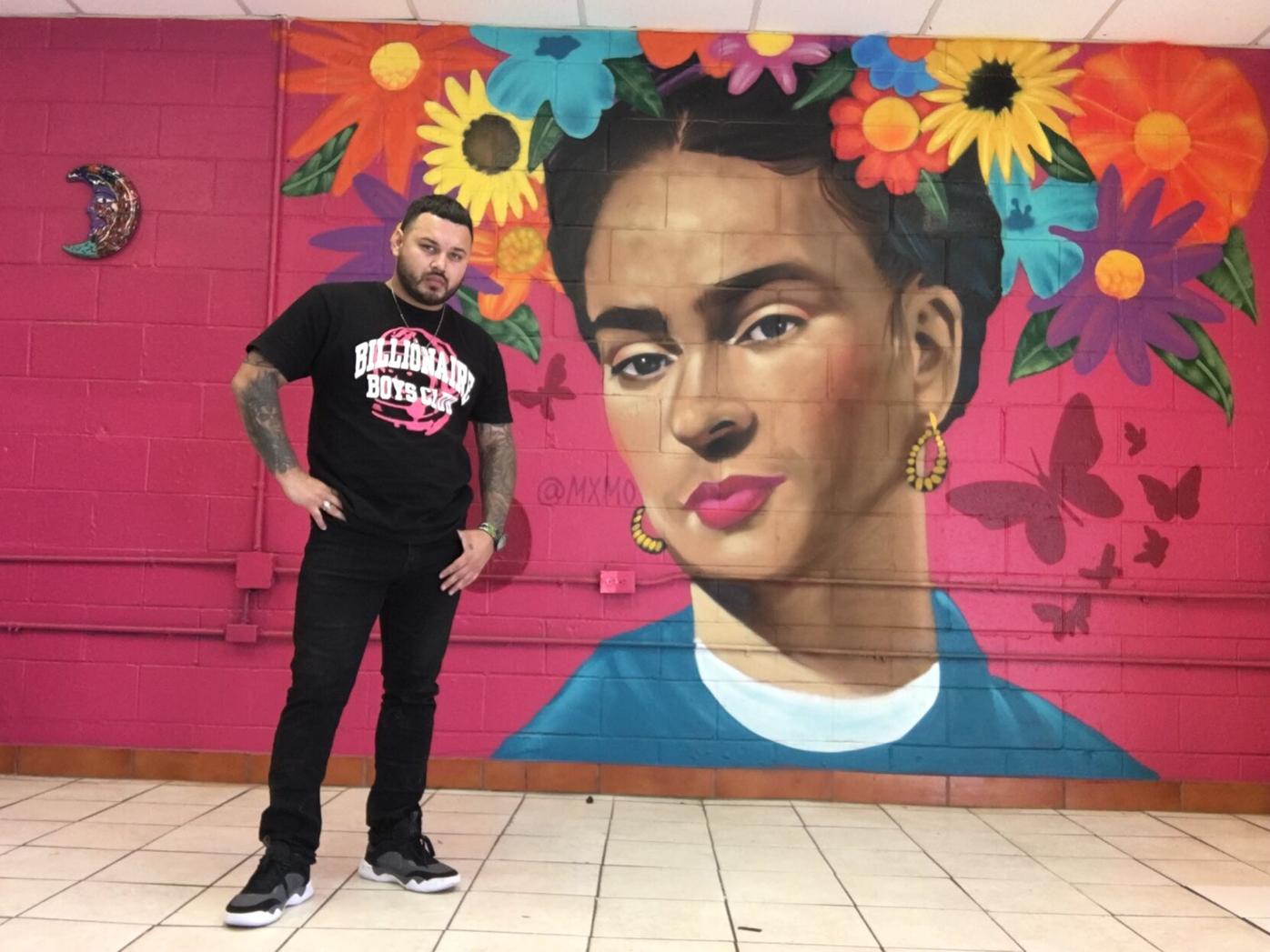 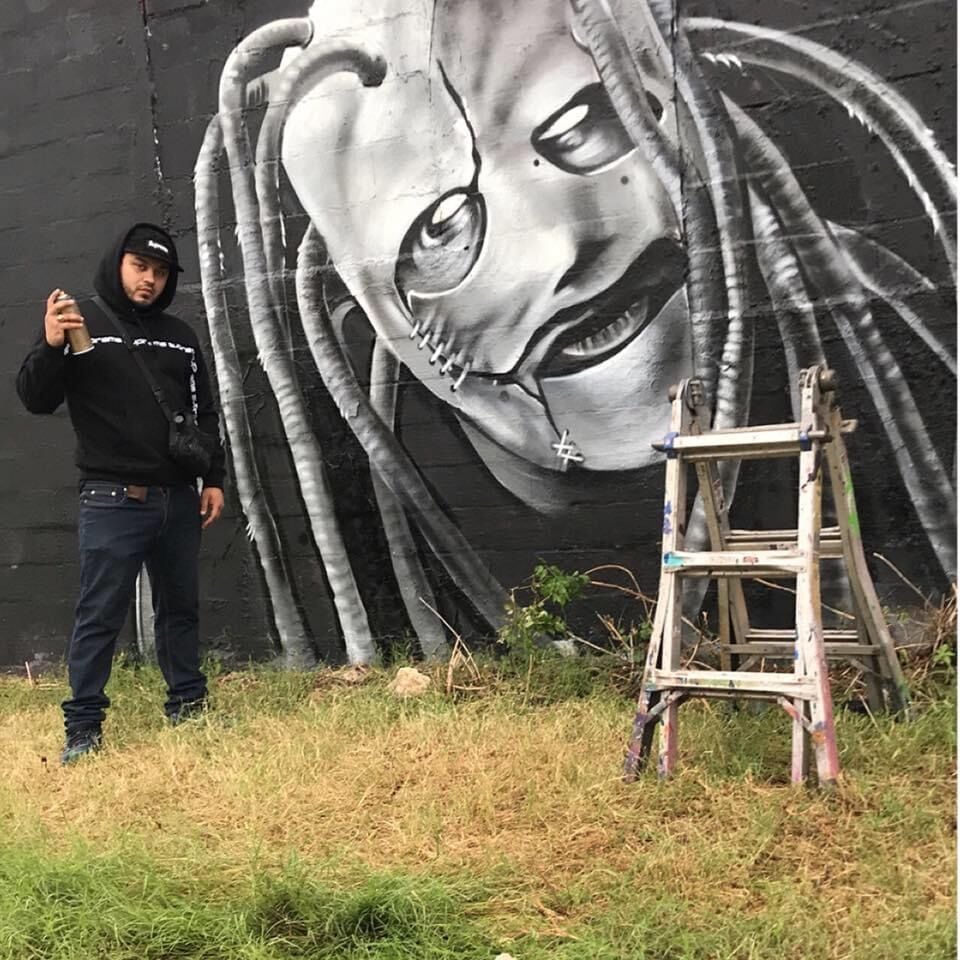 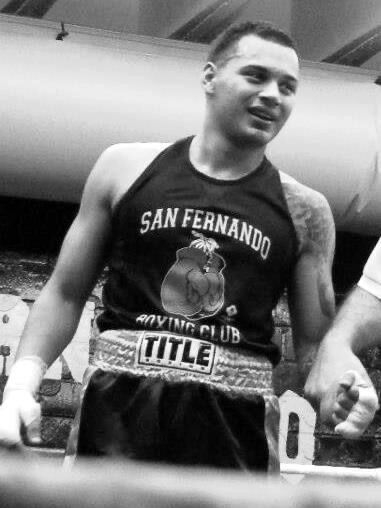 Roger Maximo boxing under San Fernando Boxing Club in 2014, at the age of 24.

After years of testing his endurance and toughness in sweat-generating sparring matches as an amateur boxer, Texas State alumnus Roger Maximo Gonzales has unlaced his gloves to create artwork inspired by childhood cartoons and celebrity legends.

After graduating from Texas State with a BFA in studio art, Gonzales went on to paint murals in cities across Texas, including San Marcos, depicting symbolic individuals like Frida Kahlo, Sid Vicious and George Floyd.

His artistic journey began while drawing on the walls of his childhood home with crayons.

"I was like five, but I drew Batman with crayons. It [didn't] look like Batman, but at the time it did," Gonzales says. "Anime stuff really got me into art. They're pushing boundaries, more like dimensional cartoons."

Gonzales' father would bring home canvases, sketchbooks and paint knowing they would provide Gonzales the opportunity to create artwork and keep him out of trouble.

"My family encouraged me, and I think that's been a huge thing because there's been times when I felt like I had no support," Gonzales says. "My dad's a big believer in me. That's always helped me."

Gonzales' mother, who passed away when he was 13, routinely bought him art books, pushing him to pursue the craft. He tries to paint women figures in memory of his mom, "a real strong woman" he holds close to his heart.

Gonzales' old fraternity brothers from Texas State witnessed him develop his love for painting. Eric Doe met the artist during his time in military school at Fort Sam Houston. Doe was nearly 10 years older than Gonzales and was intimidated by young Gonzales' success.

"[Gonzales] was all over the place with the things he wanted to do and the places he wanted to go," Doe says. "Roger's also an accomplished boxer pugilist, so he was a Golden Gloves boxer. I was completely inspired by that because it takes a lot to be a successful amateur boxer. He's got more talent in his little finger than I probably have in my entire life."

Doe would often critique Gonzales' artwork, making suggestions for improvement. He found himself impressed with Gonzales' ability to paint across different mediums.

"He can draw with just paper and pencil, he can draw using darks and lights, charcoal and he can paint with spray paint," Doe says. "That's not a talent that everybody just has. A lot of artists don't transition to other mediums the way that he does."

Martin "Marty" Velíz, another longtime friend and fraternity brother of Gonzales, says Gonzales' willingness to perform tasks, such as art, out of genuine care for others helped him grow as an individual.

"[Gonzales] had everything figured out a little bit early, and he does a lot of these things out of the kindness of his heart because artists are not there to make money," Velíz says. "Maximo is out there with the kindest heart. He is there to make a change and to make happiness."

Velíz believes Gonzales' ability to translate the art of boxing into the world of painting is second to none.

"I, first-hand watched, his attention to detail in art," Velíz says. "I feel like that's the coolest thing — he translated his martial art to the canvas. Roger's not a violent guy or anything like that, but, you know, it is an art, and he translates that directly into a painting every time."

Albert Fuentes, owner of The Gym in Del Rio, Texas, met Gonzales at a paint store when he was in the process of freshening up the outside walls of his business. After learning of Gonzales' talent, he hired him to paint a mural of Michael Jordan to go with the gym's fitness theme.

"Everybody knows Michael Jordan; my kids play basketball, and they love watching basketball, so we thought let's do a Jordan wall," Fuentes says. "It turned out really nice and we have a lot of compliments with the painting; a lot of people go back there to take pictures with it."

Gonzales plans to create a new mural in San Marcos inspired by films, like "Dazed and Confused", that captured the essence of laid-back college youth. Viewing the world as his canvas, Gonzales wants to continue expressing himself through art, painting for his own livelihood and for the individuals who do not have a platform to speak up for themselves.

"I try to make things colorful, precise and representative of how I feel at that moment in time," Gonzales says. "The goal is to reach as many people as I can with my messages. I'm here to just paint more and more."

To see more of Roger Maximo's art and keep up with his latest projects, visit his Instagram @mxmo.