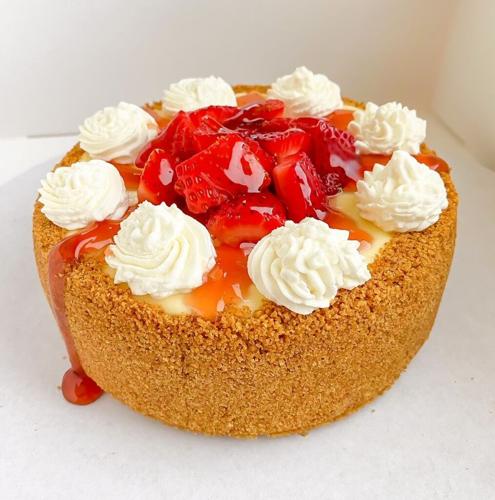 A strawberry cheesecake made by Autumn Williams for her business, The Sugar Layer. 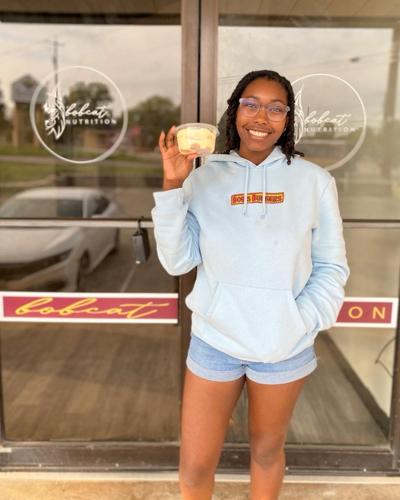 Autumn Williams holds up her banana pudding in front of Bobcat Nutrition.

In a world of puddings, cakes, cheesecakes, pies and more, Autumn Williams created The Sugar Layer to give her community a way to satisfy their sweet tooth.

In the wake of COVID-19, Williams, an advertising junior, stayed in her hometown of Cypress, Texas, where she wanted to create a business that her community could enjoy. After making her first cheesecake at her grandparents’ house in March 2020, Williams found her natural talent and love for creating tasty treats. Although her family was surprised by her newfound talent at first, they encouraged her to move forward with it by opening a business.

“Everyone was super confused, but my family kind of told me I have a gift when it comes to baking so I decided to share my gift with other people,” Williams said.

After getting her family’s approval, Williams created an Instagram page to promote her desserts, including the new layered cakes that members of the Cypress community were requesting she make.

Williams knew that in order to make an Instagram page, she needed to create a name for her business. While throwing out name ideas with her family, Williams’ aunt thought of the name “The Sugar Layer” to keep with the theme of layered cakes. In the same month it began, The Sugar Layer was in business with an Instagram page gaining engagement from the Cypress community.

Williams quickly added unique desserts to The Sugar Layer, such as puddings with flavors like Oreo and strawberry banana, as well as other sweets like red velvet cheesecake brownies and peach cobbler cinnamon rolls. Recently, she began offering gluten-free options after a first-time request for a gluten-free cheesecake received positive feedback.

In her baking, Williams tries to stray away from a store-bought taste, taking extra time to give her desserts the homemade taste that people crave when eating desserts.

“I know a lot of stores kind of make the manufactured, more generic tasting pies, so I kind of wanted to put my own spin on it,” she said.

Despite this goal, Williams had to keep in mind the difficulties she would face when it came to gaining new clientele during the peak of COVID-19.

“COVID-19 was very impactful just because when it was first introduced, everyone was super iffy and super cautious with other people,” she said. “They were just very fearful of getting it, so my biggest challenge was convincing people — especially people that didn’t know me — that I’m very sanitary when it comes to my baking. It was kind of hard to get new clients because COVID just started, and no one really wanted home-baked goods.”

Williams moved to San Marcos to attend Texas State in August where she wanted to promote The Sugar Layer. Around the same time she moved, she sold her banana pudding at the grand opening of Bobcat Nutrition, a juice bar opened by Texas State alumni L.D. and Octavia Harris to sell healthy drinks and vitamins.

During the event, Williams met Texas State football player Gjemar Daniels, an electronic media and broadcasting graduate student who had gone to support his old teammate L.D. Harris. After trying Williams’ banana pudding and going to a group dinner after the event, Williams and Daniels became good friends. Daniels admires Williams’ determination to sell her desserts through her unique and fun personality.

“When I first met Autumn, I knew nothing about her, but she was all happy, smiley and jittery, and I thought it made a lot of sense like ‘you make desserts of course you’re sweet,’” Daniels said. “Everything just made sense, so I definitely enjoy that about Autumn and her personality and always wanting to give and be there for someone. I definitely was inspired just by her work ethic and just how genuine she is.”

Along with the help of her family, new friends and a new community to serve her delicious treats to, Williams was able to boost The Sugar Layer with the knowledge she has as an advertising major, especially when it came to getting engagement through social media.

“My major has actually been a huge part of helping my business specifically because I am majoring in advertising, so a lot of skills and techniques that we talk about in class I’m able to utilize through my social medias to build my Sugar Layer brand,” Williams said.

With hopes for The Sugar Layer to evolve more into the San Marcos community, Williams has a goal of reaching out to more local businesses and connecting more to the Texas State community. Williams currently bakes in her apartment in San Marcos and sells her desserts through delivery.

As The Sugar Layer continues to grow, Williams is thankful for the talent for baking she believes was passed down to her from her grandmother and great-grandmother.

“I believe my grandma and great-grandma are really good bakers and I've been taught some things from them,” Williams said. “I think people think it’s a gift from the family.”

One of the biggest admirers in her family is her grandpa, Timothy Williams. He believes his granddaughter's ambition to be creative and committed to her desserts allows her to be a successful baker and business owner. Timothy Williams also believes that with her natural talent for baking, she comes very close to beating her grandmother's peach cobbler.

Williams plans to create a website and possibly open a storefront to bake and sell her desserts. She encourages other students to follow their dreams, no matter how ambitious they seem, because supporters will always be found along the way.

“If they’re good at something, first and foremost, they need to believe in themselves; that’s the only way that they’ll get people to believe in them,” Williams said. “It’s okay if you’re not outspoken and if you’re shy because those two things are literally me, but I would say that you can always network with people and approach people. There might be some people that aren’t very approachable, but there’s always people that are willing to give you a chance.”

For more information on The Sugar Layer and to place an order, visit its Instagram @thesugarlayer.