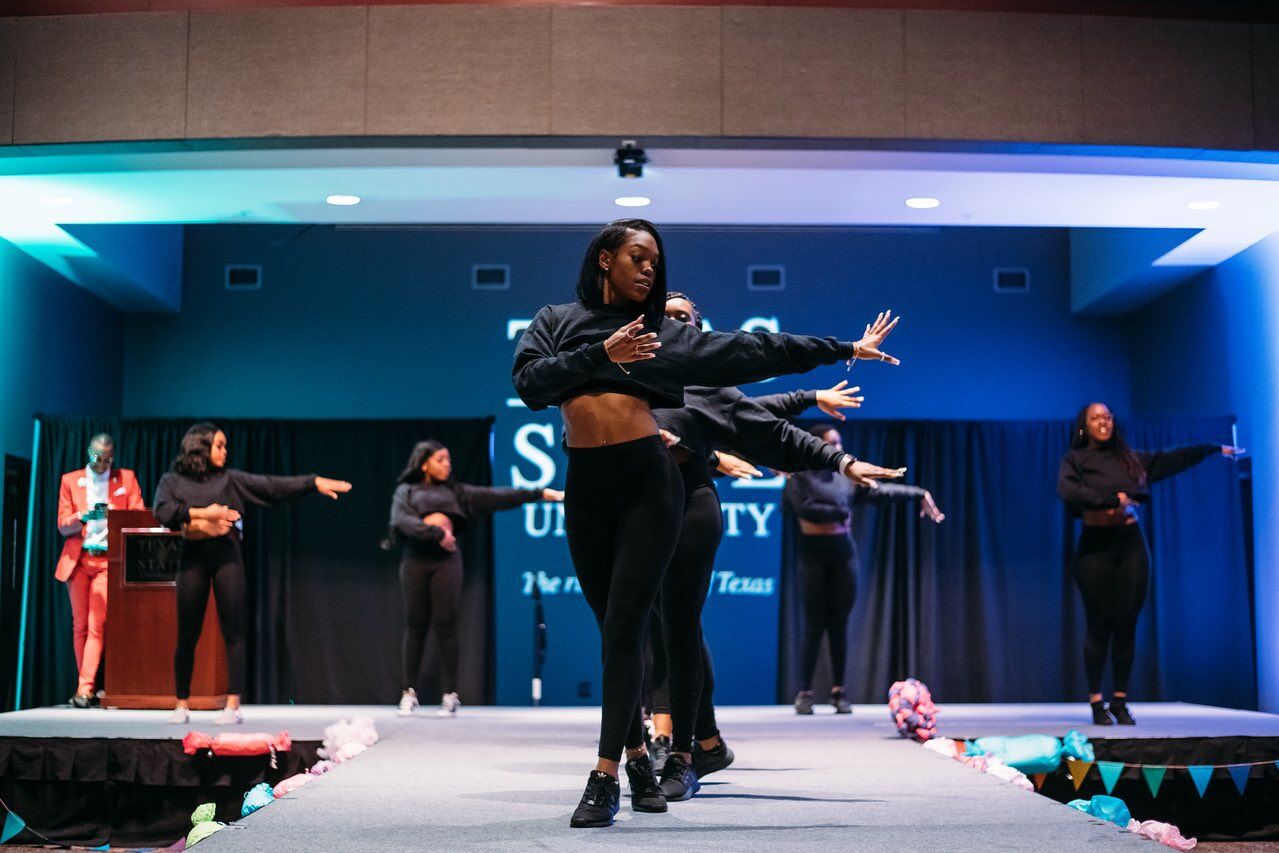 The first majorette dance team, The Golden Elites, perform at the Naturally Y.O.U. Hair Show in 2020. 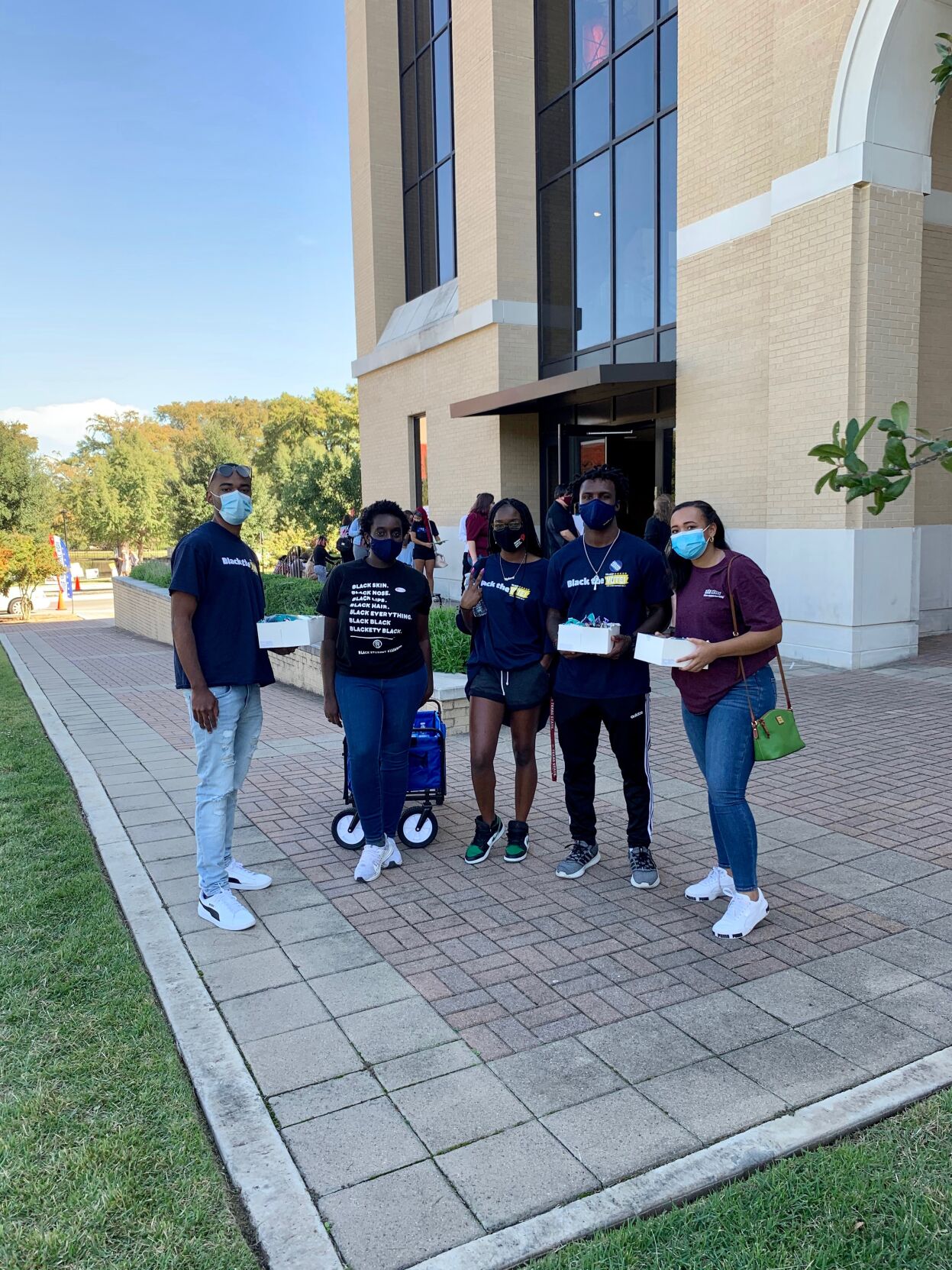 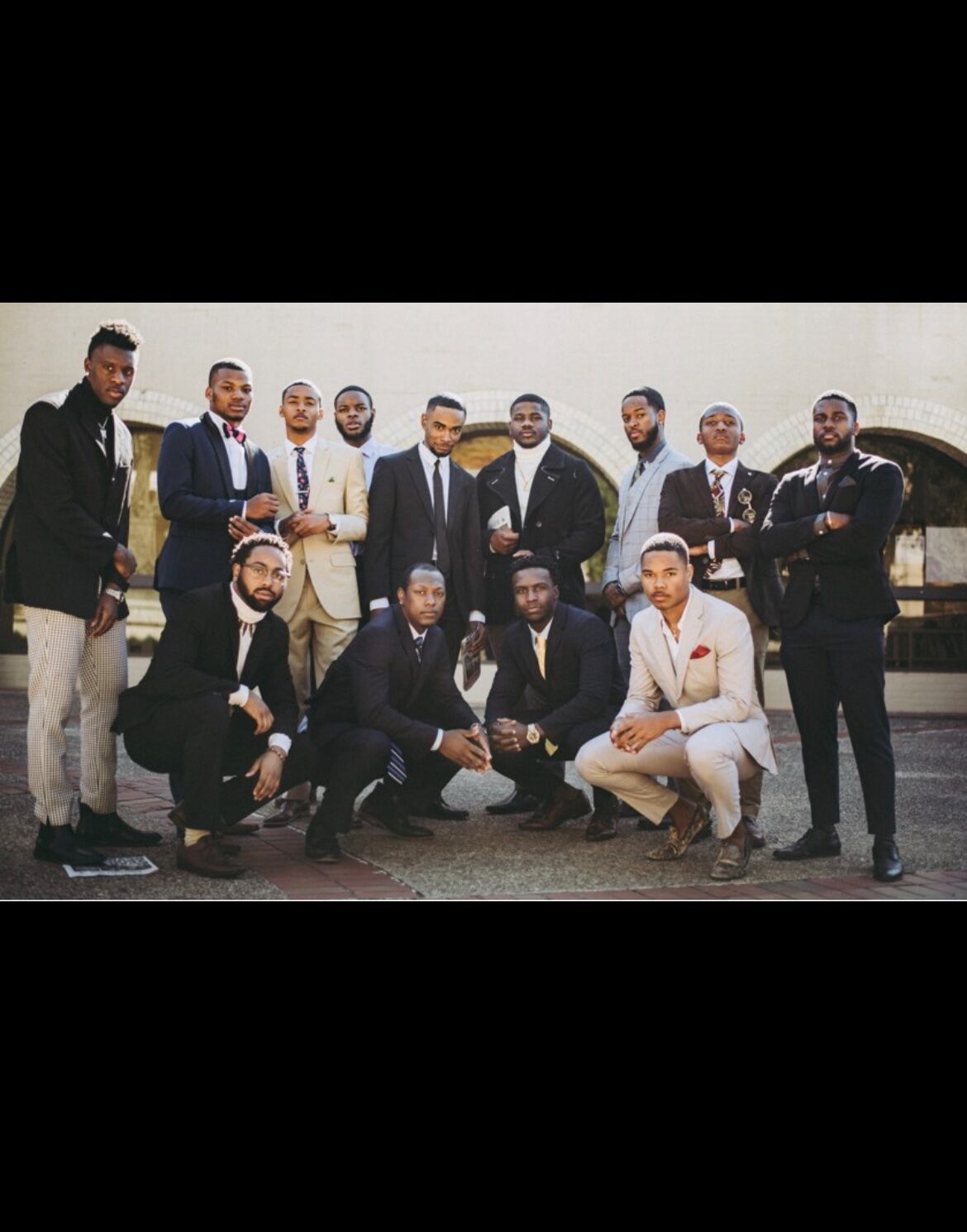 Texas State's Black Men United members pose in front of the honors hall at Texas State for a career photoshoot in fall 2019.

Black History Month serves as a time for communities from all racial backgrounds to celebrate and preserve Black history through art, activism and education. Despite the COVID-19 pandemic, student organizations have still made it a point to honor Black excellence through esteemed principles and new-found traditions.

Throughout February, student organizations will begin hosting various virtual and limited in-person events to recognize Black History Month and reflect on its meaning to students at Texas State.

Charnae Brown, a social work senior and president of the Mu Phi Chapter of Sigma Gamma Rho Sorority Inc. says Black History Month is an important time for her and her sorority sisters to remember the impact their founders have had on their organization.

“We are the only Greek organization under the National Pan-Hellenic that was founded at a [Public White Institution], and so because of that, [Black History Month] is very important to us,” Brown says.

Sigma Gamma Rho was founded in 1922 at Butler University by seven Black women who decided to create their own sorority because they were not allowed into the all-white sororities. The Mu Phi Chapter of Sigma Gamma Rho was established at Texas State in 1996 but recharted in 2016.

Brown says the sorority's core values of sisterhood, scholarship and service are monumental in the work it does for the Texas State community.

Last February, Brown says she and her sorority sisters carried out Black History Month traditions like setting up their royal blue and gold stand on the Quad to pass out cupcakes or creating educational slideshows on Black achievements.

Due to the pandemic, however, Brown has had to readjust the sorority’s typical Black History Month festivities to fit a virtual setting.

“Right now we’re looking to have another slideshow again highlighting the importance of Black History Month but also making it personal — so like what each of our chapter members find as their importance for Black History Month,” Brown says. “We all celebrate it differently within our households or just individually so we want to highlight that as well.”

This year’s celebration will include an interactive Black History game of Kahoot! on Feb. 24 via Zoom. A gift card drawing will take place afterward for the highest-scoring contestants.

Michael Smith, a criminal justice senior and Black Men United ambassador, says he and members of his organization have also had to get creative while organizing events for Black History Month.

“This year, we’re having the same event that we had last year, which is called the Black Men United (BMU) Trivia Bowl, and it’s scheduled to be set on Feb. 17," Smith says. “Now, as of right now, that date is kind of in the air because, of course, the COVID restrictions; it’s been really hard to find a booking, so that's the only issue at the moment, but what we do is we have a trivia bowl and what that trivia bowl does is it not only open up a fun day of friendly competition, but it also shines a light on individuals who play a huge part in African-American history.”

Smith joined Black Men United last spring after attending one of the organization's “Wild N’ Out” inspired icebreaker meetings. He says being a part of a strong community of Black Men at Texas State has taught him so much in such a short period of time.

“When people look at Black Men United, [they] see the activities and fun which is one thing we are big on and collaborating with other Black orgs, but we also preach about excellence, you know, Black excellence,” Smith says. “We show people how to do resumes, dress formally; a lot of people like myself never knew how to tie a tie; Black Men United taught me how to tie a tie…so you also learn tips that will take you very far in life success especially after undergrad school.”

Smith says Black history means "everything" to him and goes beyond just the month of February.

“The people that we honor and respect, me personally I do [celebrate] all year round,” Smith says. “Some may decide or choose to do it during Black History Month but, to me, Black History Month is every month, and Black History is every day, because the people that were fighting for the rights that we have now, they didn't take a certain day or a month to do it, they did it every day until they had an unjustifiable death or something crazy happen to them….So I don’t really have a certain tradition; I just believe in paying homage every single day because, at the end of the day, I wouldn’t be right here if it wasn’t for them.”

Like Smith, Brittany Baker, a social work senior and treasurer of the Texas State Golden Elites, also believes Black history should not just be celebrated in one month.

“It’s Black History Month every day for me, every time I have the opportunity to educate somebody,” Baker says. “I feel like as a Black person that does attend a PWI, it's important to stay informed on everything that’s going on within the Black community and racial discrimination.”

Baker says being one of the firsts to create a place for students to express themselves through dance and establish a more diverse community is something she feels proud of accomplishing in Texas State history.

“To bring that [HBCU] experience to a PWI, it just shows a lot,” Baker says. “It shows that you can still have an HBCU experience at a PWI with a twist on it, and it also allows us to show Texas State this other culture that’s a staple in the Black community, and even though all our founders are African-American, we don’t discriminate on any other race that would like to participate or join our organization.”

Before COVID-19, the Golden Elites would partner with other Black organizations to perform during their events. Now, the Elites will hold one of their first performances since the start of the pandemic on Feb. 19 in honor of Black History Month. The time and location will soon be announced via their Twitter page.

Another organization that partners with Black student organizations during Black History Month is Texas State's NAACP.

Established in the early 1900s to promote equity and inclusion for all people of color, the NAACP is a place for student activists to take action in their communities.

“[The NAACP] is all about making sure that people of color have a seat at the table when it comes to representation, when it comes to politics and social issues,” says Cree Taylor, a criminal justice senior and NAACP 6875-B secretary.

The NAACP 6875-B will celebrate both its Founders Week and Black History Month Feb. 8-13 through different events in-person and online.

“That whole week we will be doing voter registration, trivia bowls and we’ll be having a regular meeting, as well as attempting to have hopefully a profit chair so that people can come out and not only will we talk about serious issues…but we’ll be having social events just to get more members and have more people feel like they’re in the community,” Taylor says.

The profit share meeting, trivia bowl and voter registration events will all take place in-person with safety protocols in place. Times and locations are still being determined but will soon become available on the Texas State NAACP Twitter page.

Taylor hopes students will take time to educate themselves on Black history, specifically American Black history, during and after Black History Month. She also encourages more students of color to join the NAACP to establish a stronger voice for those who often go unheard.

"I think to the NAACP, Black History Month is really just about advocacy," Taylor says. "Advocacy for people that don't get the opportunity to be heard all of the time, under-served communities, especially Black and brown communities because I feel like we're often the backbone of our country, but we're not seen and heard in that way."

In the early days of the pandemic, when small businesses were forced to close their doors and grocery store shelves were emptied by frantic shoppers stocking up for quarantine, brothers Davis and Patton Jones began to wonder what it would be like if San Marcos had not been as prepared as it was.