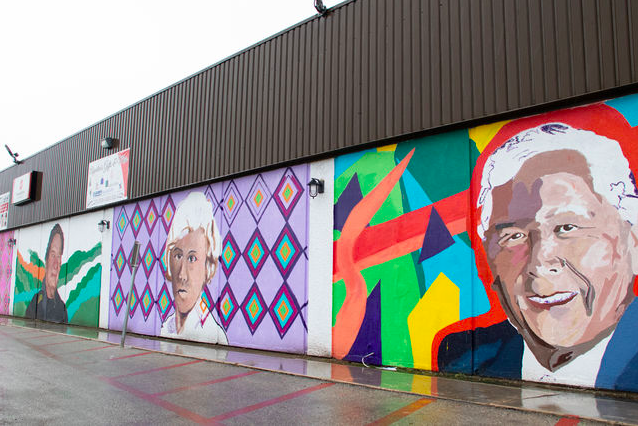 Community mural by Mano Amiga on the side of QC Meat Market, Thursday, July 22, 2021, in San Marcos. 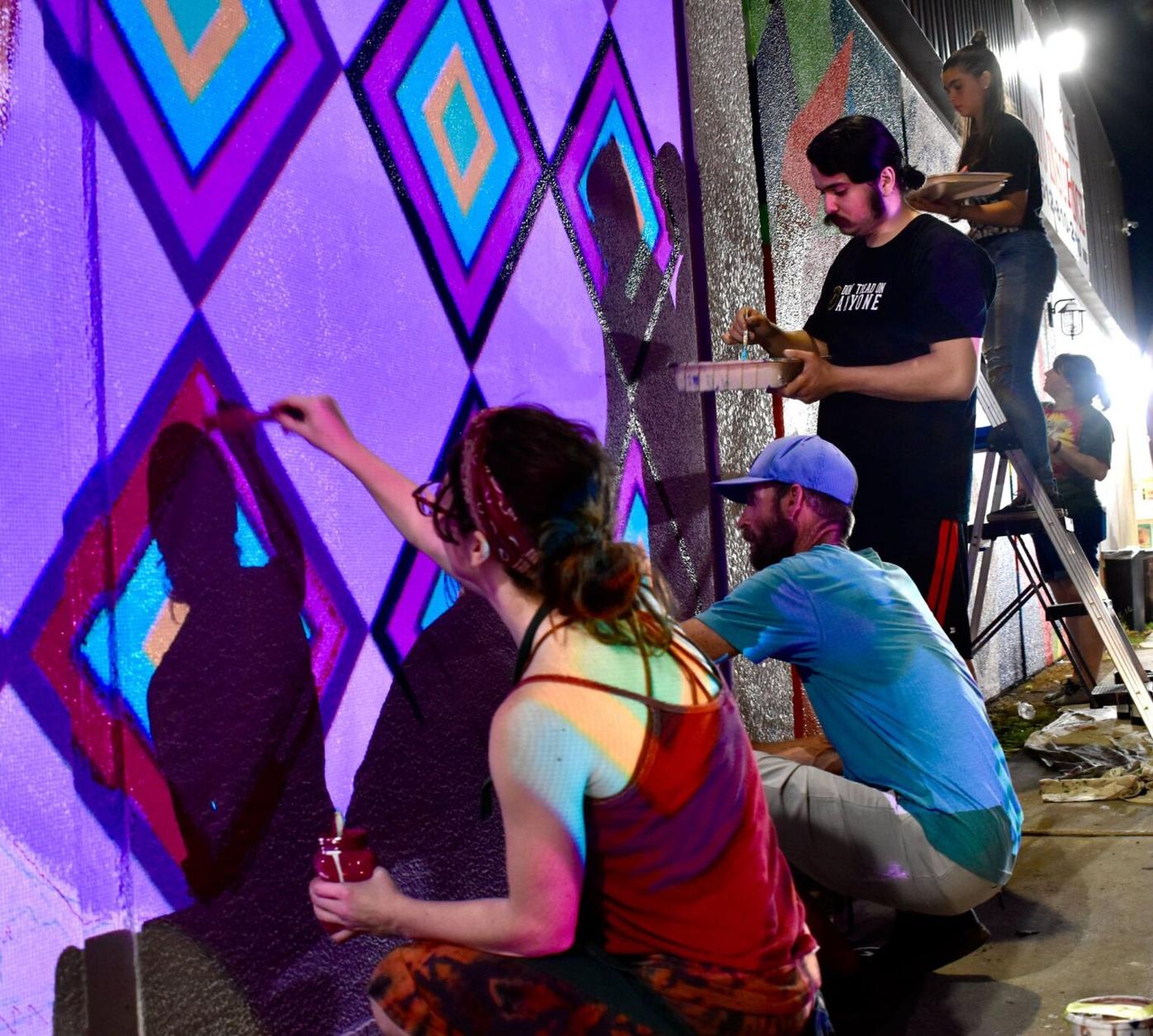 Community members painting the mural together on one of Mano Amiga's paint nights in June. 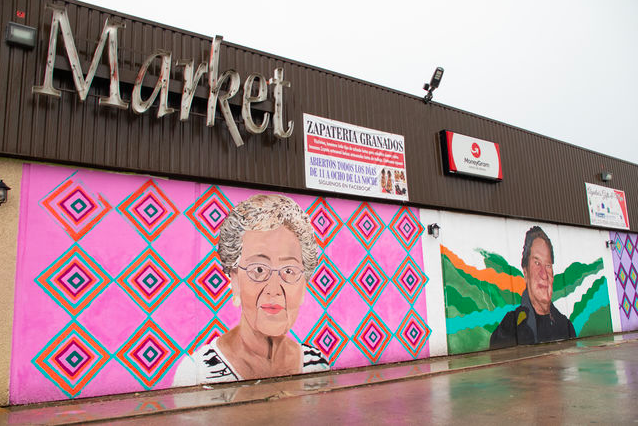 Community mural by Mano Amiga on the side of QC Meat Market, Thursday, July 22, 2021, in San Marcos.

With buckets of paint and an eagerness to preserve the history of San Marcos, Mano Amiga, a local grassroots organization, created a mural in honor of local Latinx leaders who advocated for the city's Latinx and low-income populations.

Mano Amiga began the mural's planning process three months ago when it reached out to the Council for the Indigenous and Tejano Community (CITC) for a list of local historical leaders that could be featured in the mural. Donations from the San Marcos Art Commission, the Poetry Foundation and the Texas State Center for the Study of the Southwest helped fund the project.

Dayann Pazmino, the arts advocacy coordinator for Mano Amiga, stayed heavily involved in the planning, mapping and execution of the project and says a project like this is important for young adults to see their culture represented.

"For me, the inspiration came from growing up and not seeing enough visibility, or, recognition, I think is the right word, here. I think that the effect of that just, for me as a first-generation college student, it kind of made it harder for me to believe that I could achieve being in a position of leadership or getting involved in local politics," Pazmino says. "But, I think the more that we have that recognition and understanding that there [have] been many leaders before us that just weren't recognized, I think it brings a lot of visibility and encouragement to future leaders."

The mural, located on the walls of the QC Meat Market, features four historical community leaders: Ofelia Vásquez Philo, a founder of Centro Cultural Hispano and the first Latina woman on the school board; Tommy Cuevas Jr., who opened Cuevas Produce and assisted many low-income families in need of healthy food; Tomás Rivera, a Texas State alumnus and recognized writer and poet who wrote about migrant farmworkers and their hardships; and Pauline Espinosa, a local business owner who assisted with paying bonds for low-income residents.

Bobbie Garza-Hernandez, a fourth-generation San Marcos resident and writer for the CITC, was a close friend of Espinosa's family growing up. Pauline Espinosa and her husband, Jose, even baptized Garza-Hernandez's brother. She also remembers going into the Espinosa's grocery store when walking home from school.

Seeing Pauline receive deserved recognition through the mural brings Garza-Hernandez personal joy. To her, this mural is a way to preserve the forgotten history of the local Latinx community and teach younger generations about the city's pioneers.

"[Latinx representation] is very important. It falls within the mission of what CITC is, that's why we were created, and that's why we do the work that we do on our own time with our own tools," Garza-Hernandez says. "To make sure our stories are not only documented but that they are told honestly and not whitewashed. And so, I think going forward, there's still so much work to be done."

As part of this "work", the mural not only acts as an artistic tribute but serves as an educational landmark from which important conversations can begin. Samantha Benavides, a Mano Amiga campaign fellow, says the mural represents the history of the Latinx community that locals may not learn about in school.

"I feel like our classes are so, so incredibly whitewashed. You know, we're not taught about our own ancestors. I think that this is really important for community education," Benavides says. "Representation — it's not everything, but it matters. It matters to those looking up to leadership and to see themselves in leadership. And I think it's so great that people who might not be seeing themselves in their textbooks will see themselves in this public art installation in their community."

Throughout the project's development, Pazmino says the mural team has learned a lot about how the San Marcos community stood before becoming known as a college town. They say working to bridge the gap between Texas State and the local community is one of the most beautiful parts of creating the mural.

"As someone who moved here, maybe not even like two years ago, maybe like two and a half years ago, I really don't know much about the community, and that's the same for so many college students," Benavides says. "They really don't know about the actual community of San Marcos; they know about the college part of it. So, I think it's really cool that they're going to drive by and see it and maybe come to the reveal and learn about the people who were here before them."

The QC Meat Market, where the mural is showcased, is located in El Barrio Pescado, a historically predominantly Latinx neighborhood in San Marcos. Pazmino says the mural's location helped the group form an important pillar of togetherness with the surrounding community.

"This has been such a year for talking about the impacts of laws that affect people of color. And, it's like, we need to know that in our local community, that's still pretty new. And that's like also a reminder to why we're doing this and why it's a continuous fight, you know, and not to be too political, but racism still exists," Pazmino says. "And so, I think of this kind of as our form of just being like, you know, there [have] been so many attacks, so many hardships, and this is like more of a celebration for us to remember and continue that fight."

While the group recognizes there is always more work to be done to advocate for the Latinx community, Garza-Hernandez says preserving history through art is necessary to show other communities what the Latinx population in San Marcos is capable of.

"More than anything, I think our community as it is now — even some of those that lived through that era — we're losing our elders. And so those histories will be lost if we don't collect them now," Garza-Hernandez says. "And I think [the recognition in the mural] gives our children and grandchildren and great-grandchildren an opportunity to see that we are a community that has made a difference, that we're not just kind of along for the ride, that we have been an example of good citizenry, of hard workers."

The mural's celebratory reveal will take place on Saturday, Aug. 14 from 7-9 p.m. and will feature food, activities for children, music, a reading of a Tomás Rivera poem and speeches from family members of those featured in the mural.

An earlier version of this story misspelled Pauline Espinosa's name and provided incorrect names for Tommy Cuevas Jr. and Ofelia Vásquez Philo. These mistakes have been corrected. The mural's reveal has also been corrected from Aug. 14 from 6-8 p.m. to Aug. 14 from 7-9 p.m. We sincerely apologize for these errors.