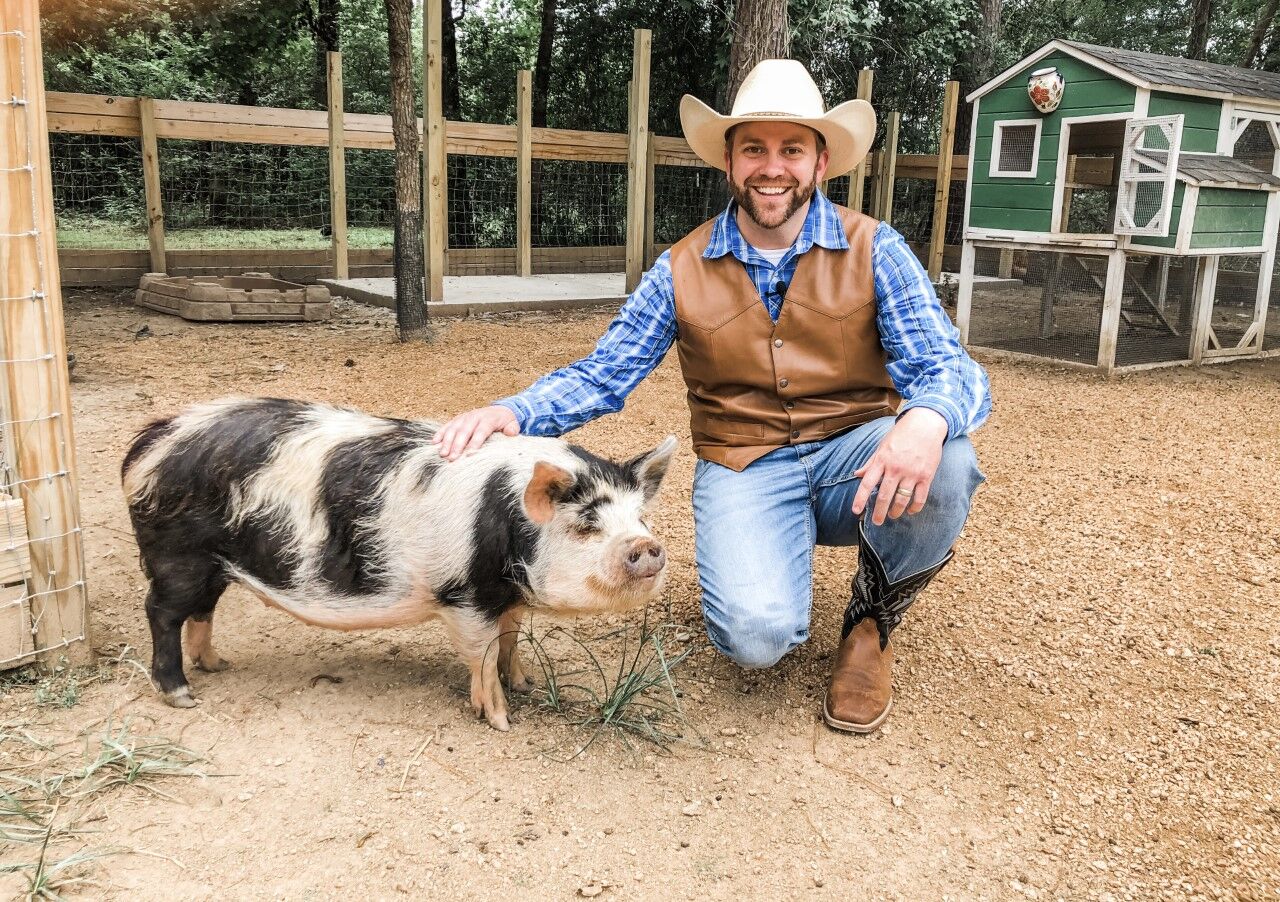 Cowboy Jack smiles and pets a Kunekune pig at The Learning Zoo in Conroe, Texas. In this episode, Cowboy Jack met with a zookeeper to learn and teach viewers about the different animals at the zoo. 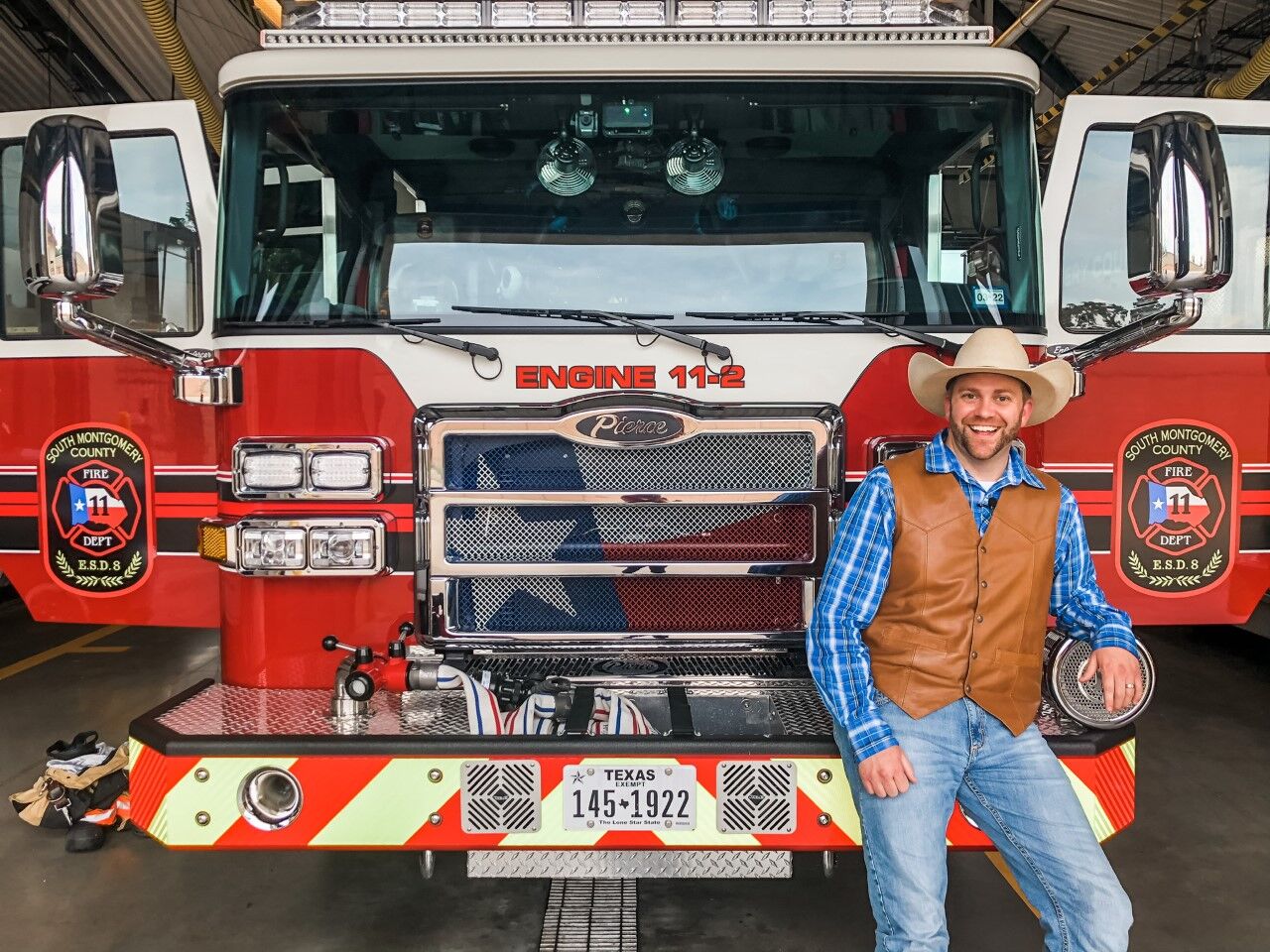 Cowboy Jack smiles in front of a fire truck at  the South Montgomery Country Fire Station 11-2 in Conroe, Texas. On this virtual field trip, Cowboy Jack worked with an engineer/operator to take viewers behind the scenes of a firefighter's entire workday.

Dressing up as a cowboy for his own kid-friendly YouTube channel wasn't necessarily the post-grad career plan John Havard had in mind.

"It's crazy strange because like anybody who knew me when I was back at Texas State, this would probably have been the last thing that they would have imagined I would end up doing," says John Havard, who graduated in 2008 with a degree in marketing. "But, all I can say is, having kids changes you a lot."

The idea behind starting a channel launched in March after he and his wife Andrea struggled to find a suitable YouTube creator for their 3-year-old son. Their first video was a visit to a pond near their house.

"My husband — he's goofy by nature, so it's perfect for him because he can be goofy on film, and he does great, and he's just a natural. He comes up with stuff right off the bat ... we never write a script or anything like that," Andrea Havard says. "We got a camera and we figured out exactly that we wanted to do something Texas-themed. So, we picked out the whole boots and hat and all that, and we went down to our pond, and we just kind of winged it, and it came out pretty good, we thought, and our son liked it."

The channel originated as a way to keep the videos they made for their son all in one place. After showing the videos to their friends who also had young kids, word of mouth led to new subscribers and increased views. Since its start, the channel has accumulated over 3,000 subscribers and 72,500 views.

The goal of the channel is to educate and entertain kids with learning activities and weekly field trips to new locations. In some of his most popular videos, Cowboy Jack meets with police officers to learn about their job and leads a science adventure at Little Beakers, a children's science lab in The Woodlands, Texas.

Unlike big production children's shows that are filmed in cities like Los Angeles, John Havard hopes producing videos filmed in Texas is a feature parents can appreciate.

"Most of the big production kids' shows that are out there are either produced in a studio in Los Angeles, or, you know, the big names are shooting on locations, but it's throughout the Pacific Northwest and Las Vegas. And that's not really relatable for our kids here in Texas. They can't have that same experience here," John Havard says. "So, we're trying to make sure that everything that we do is something that a kid in a small town or big city in Texas can recreate."

"[Other kids' content creators] almost give like a false sense of reality for a lot of kids. They want to show off all these nice things they have," Meloy says. "They're not really teaching them anything. It's more of a 'Look at what I have, watch me play with these toys.' And some of them, you know, parents think, 'Oh, they're just watching this child play with their toys,' but in reality, like, you don't know what they're watching, unless you're sitting there watching it with them."

Meloy discovered Cowboy Jack through Facebook, back when the channel was first starting out. Her son has been a regular viewer since. She says the videos help him understand and comprehend information.

"He's engaged, learning, he sees it, it's visualized for him, and again it's somebody he looks up to, so it's helping him memorize and obtain the information," Meloy says.

Throughout their time creating educational content for their channel, John and Andrea Havard say they too have learned new things, whether it was about a place they visited or the work that goes into creating and posting videos to YouTube.

"We both have a lot of fun going into all these places," Andrea Havard says. "So, it's cool to like, get to see all the things that a fire truck has on it and stuff. And then, we've done different ones. Like, with animals, and we've gotten to, you know, touch snakes and stuff. You don't ever really get to do anything like that. And so, it's fun. It's like we're, you know, little kids all over again too."

For John Havard, the most rewarding thing about creating content as Cowboy Jack is the feedback he has received from parents and teachers who play his videos in class.

"I get a couple of pictures a day from different parents showing, you know, 'Hey, my son's doing the science experiments that you did' or 'My son just wanted to say 'Hi,'' or 'We're having such a great time watching your videos.' That makes me feel good," John Havard says. "But the other thing that really blew me away, that I'm in absolute love with is how many teachers I'm having reach out to me and saying, 'We're going to use your content in the classroom.' Teachers have the hardest job ... the fact that maybe Cowboy Jack is making their day a little bit easier or bringing a new dimension into the classroom is just the coolest thing to me."

Looking ahead, John Havard says Cowboy Jack has San Marcos-themed content on the way. He looks forward to visiting new places and continuing to entertain kids with his lively spirit.

"We've actually heard from viewers in like New Zealand and Canada. It's really big," John Havard says. "So, you know, it's kind of, it's all over the place. And now we're getting to the point in our own local community where we go out and a kid will be like, 'Hey, there's Cowboy Jack,' and it's hilarious to me. It's still beyond me that children are watching this and enjoying it. It's something goofy that I did for my own son and now, there's kids all over the place, making them smile. So, it's good stuff."

To keep up with Cowboy Jack, visit his Facebook @cowboyjackshow.