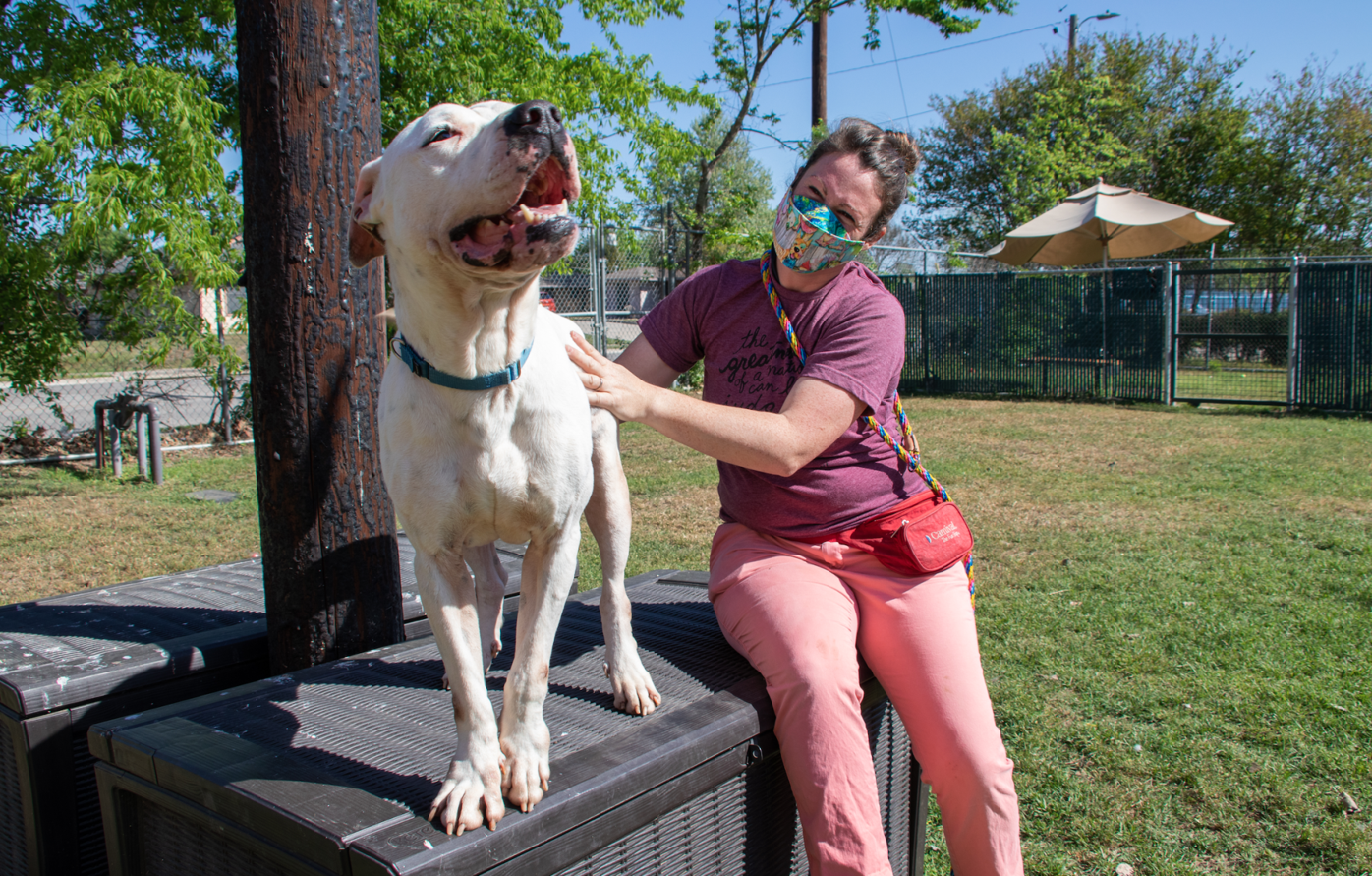 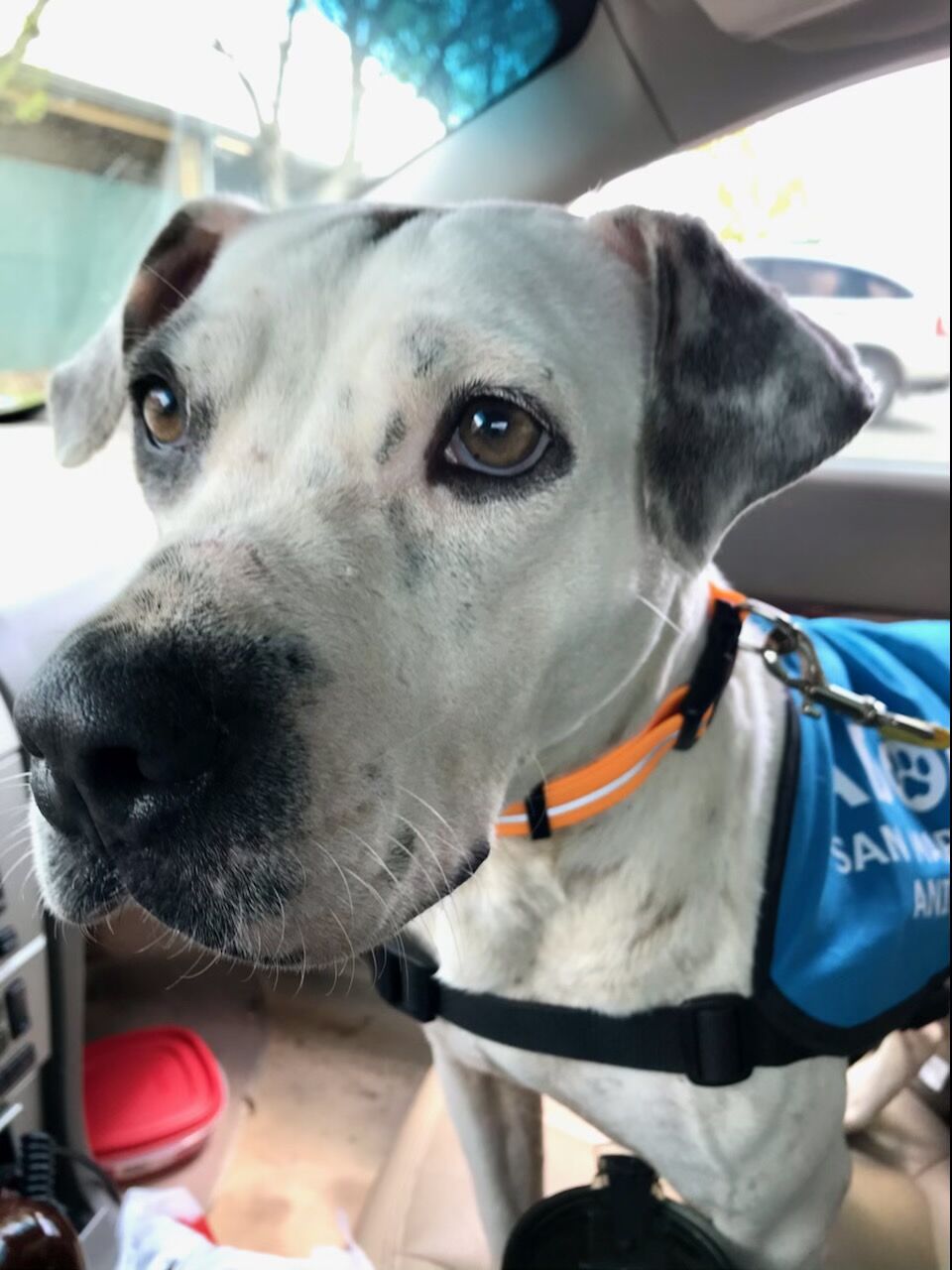 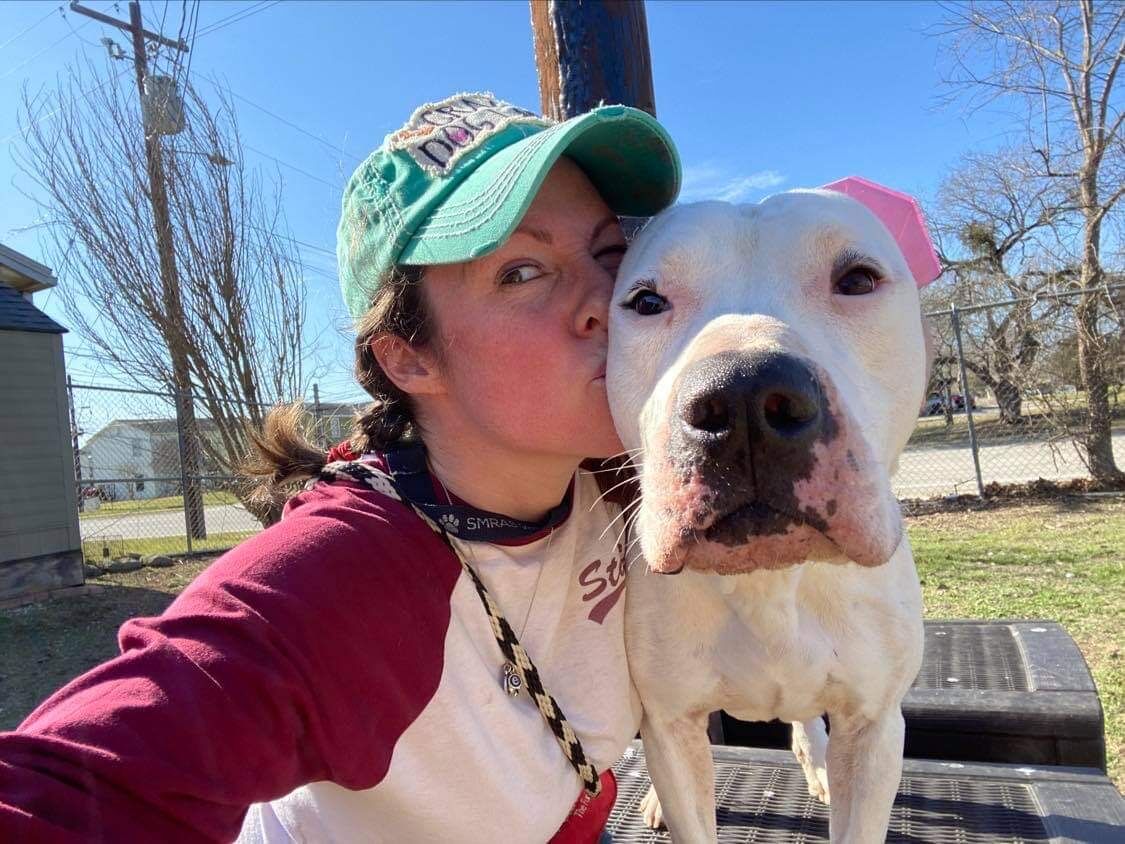 Jen Harris kisses a rescue pit bull, Hank, on his head on her volunteer trip for Dog's Day Out on Feb. 22, 2021, in San Marcos, Texas.

With wagging tails and slobbery smiles, pure excitement is filling the hearts of San Marcos Regional Shelter rescue dogs as volunteers storm in to partake in its Dog's Day Out program.

The new program allows approved volunteers 18 or older to "borrow" a shelter dog for a day. Volunteers take dogs around San Marcos for walks, hikes, grabbing "puppuccinos" or car rides. The program is a way for dogs to leave the shelter after spending most of their time cooped up in kennels.

Sophia Proler, San Marcos Regional Animal Shelter program coordinator, says Dog's Day Out is a great way for the community to familiarize itself with the dogs outside of a sheltered environment.

“A lot of our larger breed dogs don’t show very well at the shelter,” Proler says. “They’re in a smaller kennel, they are cooped up and you may not realize just how cute and wonderful they are until you get them out on the trail. It’s a really good opportunity to lower the stress of the dogs, to get a little exercise as a volunteer and to meet new people out on the trail or at dog-friendly restaurants and patios, so the pup can maybe find their forever home.”

For some dogs, Dog's Day Out is the only way they are allowed to stretch their paws, get active and show off their friendly personalities.

Dianne Witter, a San Marcos resident and first-time volunteer of Dog’s Day Out, spent her Easter Sunday with Rainbow, a rescue dog who she says was mesmerized by the simple things in life.

“She really enjoyed it. We went and sat by the river and walked around the park,” Witter says. “She had been a street dog her whole life; she never had a person before and the things we were doing were a first for her, so it was really cool seeing her experience it for the first time. She rolled on her back in the grass, got up on a picnic table and just enjoyed being out in the world.”

As someone with three cats in a one-bedroom home, Witter enjoyed the opportunity to spend time with Rainbow without the full commitment of taking her back home.

“[Dog’s Day Out] is a great low commitment way to help out the shelter and help out the dogs without having to put a lot of time, effort and resources into it,” Witter says. “It’s a great experience for the dogs; they’re cooped in the kennel...It [gives] them more socialization and gets them out and about.”

Although dogs are treated with love and care at the shelter, being inside kennels for a long period of time can take a toll on a dog's mental health as unfamiliar noises and faces are introduced to them daily.

“The shelter environment is a constant stimulus,” says Jen Harris, an active volunteer at the shelter. “They’ll catch a new smell, or they’ll catch a new noise or there will be a different pitch in somebody's bark that could potentially be signaling that they’re in stress, and then it’s sending stress out essentially into the shelter.”

Hank, a rescue dog who has resided at the shelter since November, has begun to feel the distress of excessive noises in his confined space. Hoping to relieve Hank from his anxiety, Harris, who has grown fond of the 70-pound Staffordshire terrier cross, volunteers to take him out.

“[Pit bulls] are typically high energy dogs, they are very athletic, very smart and staying in a kennel for a long period of time is really stressful,” Harris says. “Hank is definitely feeling the effects of that. Typically a lot of our dogs that are under stress end up losing some weight, even though the food schedule isn’t any different as if they were at home, but it’s just the stress of being alone [and] staying at the shelter; it tends to take a toll on their body.”

With approximately four to five thousand animals entering the shelter’s doors each year, there is an urgent need for volunteers and potential adopters to lend their time and hearts to the rescue dogs.

Harris encourages dog lovers to take a look at rescue dogs within their local shelters rather than bred puppies on websites like Craigslist.

“'Adopt don’t shop' is always kind of the best motto,” Harris says. “Why go buy a new puppy from a breeder when there’s a perfectly deserving dog at a shelter waiting for a home just like yours?”

Volunteers can take dogs out for up to three hours on any Sunday, Tuesday or Wednesday from 8:30 a.m. to 3 p.m.

To volunteer for Dog’s Day Out fill out an application. For more information on the program or how to adopt, visit the San Marcos Regional Animal shelter’s website and Facebook page.