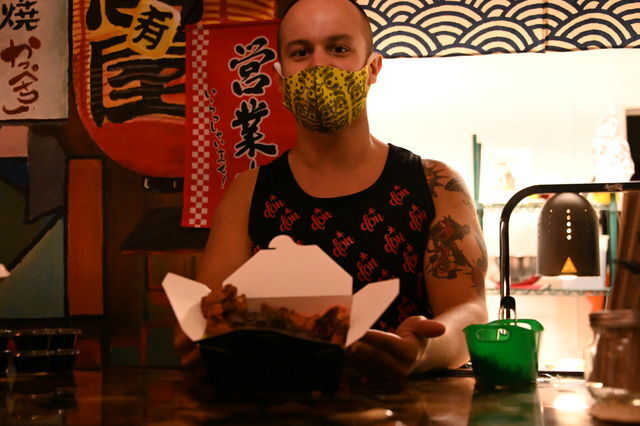 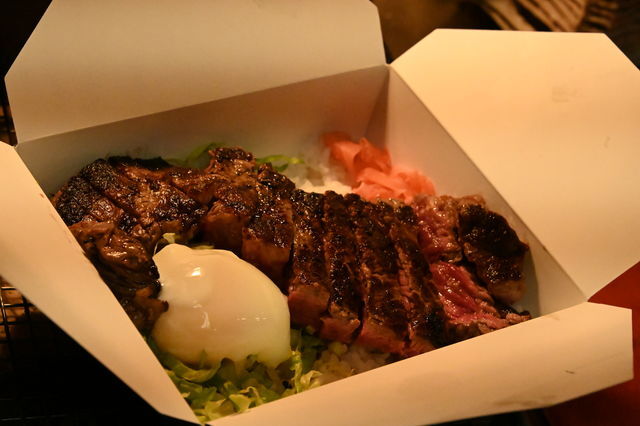 A box of Don beef ribeye steak, Wednesday, Nov. 11,  2020, at Don Japanese Kitchen. The egg, which is free of charge the first time someone orders it, has been sous vide and Sumner recommends mixing it in with the rice. 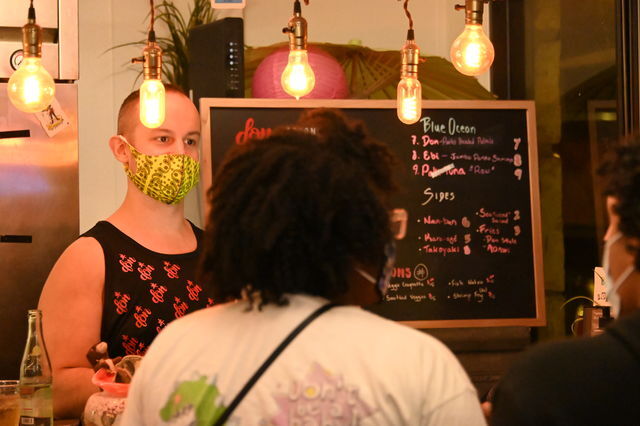 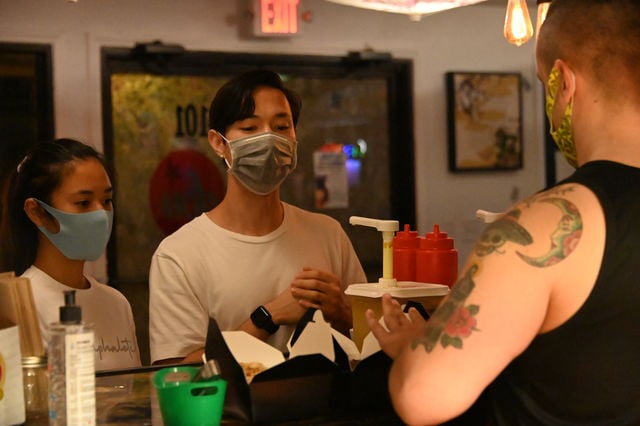 JC Gutierrez Jr. helps customers Nina Nguyen and Colin Ernst, Wednesday, Nov. 11,  2020, at Don Japanese Kitchen. Gutierrez and Edward Sumner are the only employees at Don and enjoy serving up dishes to their regular customers.

Driving up the hill on LBJ Drive, there is a restaurant where customers are greeted with a front door decked out in graphic stickers and a dining room where colorful umbrellas hang from the ceiling.

Orders of rice boxes overflowing with flavor and co-owners committed to serving their community are the foundation of the local eatery known as Don Japanese Kitchen.

Edward Sumner, 28, from Sugar Land, Texas, and JC Gutierrez Jr., 29, from Laredo, Texas, started Don as a food truck in Austin but eventually made San Marcos the home for their restaurant location in May 2019. Since the restaurant's opening, students and the community have enjoyed a variety of Japanese influenced meals at an affordable price.

"We wanted to open a restaurant that was a healthy alternative from fast food but was still very affordable," Gutierrez Jr. said. "College students are already paying so much on tuition and housing; there should be a better alternative to healthy, affordable food."

Living down the hall from each other in their dormitory at the University of Texas at San Antonio, Sumner and Gutierrez Jr. met their freshman year and became close friends. At the time, the duo worked jobs in the fast-food industry which eventually inspired them to want to venture further into the food business.

Sumner later transferred to the University of Texas at Austin. However, he maintained frequent contact with Gutierrez Jr. During that time, Sumner developed the idea for the Japanese kitchen.

“The community here is priceless, and we couldn’t ask for anything better,” Sumner said. "We didn't want to step on anyone's toes when we first opened; we have so much respect for the mom and pop shops in San Marcos and root for them so much."

Although young entrepreneurs, Sumner and Gutierrez Jr. have worked hard to get to where they are. Before embarking on the journey of running their own restaurant, Gutierrez Jr. worked as the youngest kitchen manager at a restaurant in Austin while Sumner worked two jobs as a line cook and even donated plasma.

After only a year of operating their food truck in Austin, Sumner and Gutierrez Jr. found themselves selling out almost every night. In fact, selling out happened so often they would sometimes close for a few hours to prepare food in advance to feed hungry customers.

"To put the size [of the food truck] into perspective, our kitchen now was the size of our entire food truck," Gutierrez Jr. said.

While COVID-19 has impacted small businesses and restaurants throughout the country, Sumner and Gutierrez Jr. remain committed to providing excellent service to their customers and have offered any menu item for free to senior citizens.

Being of Japanese heritage, Sumner says the inspiration from the menu stemmed from wanting to make dishes customers would enjoy and food his mother cooked for him growing up.

All of Don's dishes are made in-house and prepared by Sumner. Each dish starts with a bed of white rice, ginger and whatever protein the customer wants to add. Popular dishes include #4 Beef, #5 Pork Belly and #6 Kara-age/Nan-ban. The restaurant is currently working on obtaining its beer and liquor permits to expand its menu.

Gutierrez Jr. says his favorite dish is #6 Kara-age/Nan-ban, and he encourages people to order if they have trouble deciding. It features a serving of giant popcorn chicken that has been marinated in a garlic sesame soy sauce for at least four hours. The tender and flavor-filled protein is served alongside lightly-fried potatoes, teriyaki sauce and a sweet and sour glaze.

Lucy Ross, a social work sophomore, visited Don for the first time in November and ordered #2 Terriyaki Chicken. She says her introduction to the restaurant was unexpected and random but turned out to be a memorable experience.

"This is the first time I've been here, and I will be coming here more often," Ross said. "I didn't know this restaurant was here until my friend ordered take out and let me try a bite of their food yesterday; I came to order for myself today."

Just like the menu, Don Japanese Kitchen's decor is very much authentic. Pieces such as the umbrellas hanging from the ceiling to the wood grain tables where customers sit down for a meal were all handmade by Sumner and Gutierrez Jr. The open dining space allows customers to get a glimpse inside the kitchen where all the magic happens.

“The main reason customers are able to see straight through the kitchen is because chef (Sumner) loves to interact with the people who are buying and trying his food," Gutierrez Jr. said. "It makes the entire experience more personal and allows staff to interact with regulars."