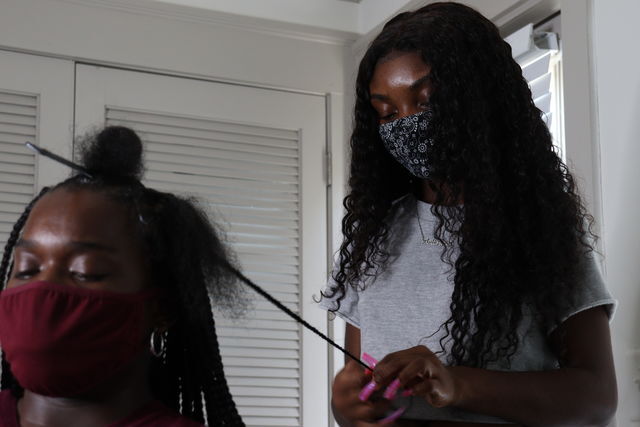 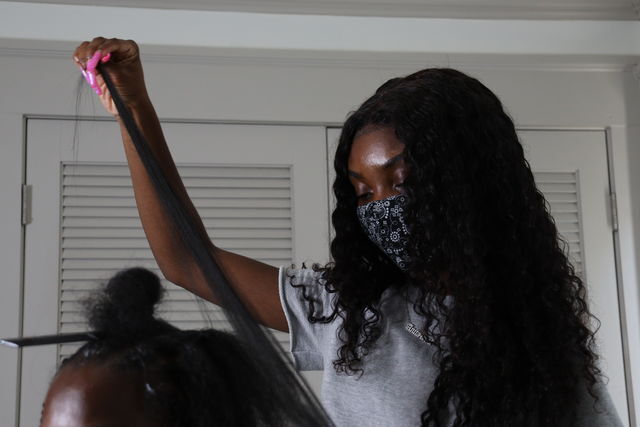 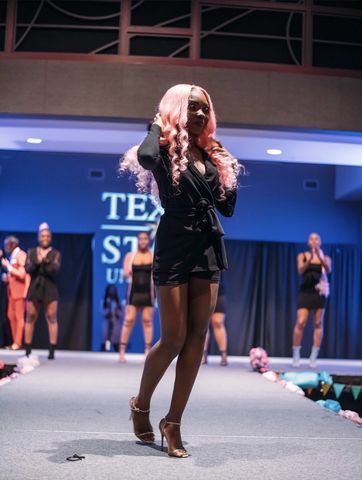 Anita Natufe walks down the runway after her win at the “Welcome to Candyland” hair show Friday, March 6, 2020, at the LBJ Student Center. The hair show was presented by Naturally Y.O.U. and Texas State’s National Pan-Hellenic Council. (Photo courtesy of Anita Natufe)

Anita Natufe, like many others, joined TikTok as a way to watch funny videos and share them with her friends. Little did she know the app would take her hair business to new heights.

Until last year, Natufe, a civil engineering sophomore at Texas State, only used Instagram, Twitter and Snapchat to promote her braiding business. After some convincing from her friends, she gave in and posted her first TikTok which garnered over 50,000 views.

Natufe’s TikTok journey, under the handle @anita4real_, continued as she began to post videos of her braiding hair and making wigs. The views on Natufe’s videos now range from 20,000 to 2.1 million and counting. With over 100,000 followers, she says TikTok has given her an opportunity to expose her business and get paid for it.

“A lot of people reach out to sponsor me, like, they would have me wear their hair and make videos about it so other people could buy it,” Natufe said. “TikTok also just got a $1 billion creator fund, so now they’re paying me for my views.”

19-year-old Natufe’s hair skills began to blossom in 2016 after she learned techniques from her mom and studied YouTube videos. After practicing and receiving compliments from her family and friends, Natufe began networking.

The power of networking attracted Amori Robinson, a psychology sophomore, who met Natufe after hearing about her work through mutual friends. They connected over the fact they both grew up in Alief, a suburb in Houston, and instantly became friends.

“When you’re getting your hair done, you just find different people who [do] hair around the area, and Anita’s name came up,” Robinson said. “I wanted to have her do my hair when I got down to Texas State, so finally, I met her, she did my hair and she’s been doing my hair ever since.”

Robinson says she admires Natufe’s approach to her new-found fame and hopes she will continue to get the recognition she deserves.

“She’s humble; it’s humble to the point where you be like ‘acknowledge yourself,’ but she don’t do it,” Robinson said. “So, when that [TikTok fame] came I was like, ‘that’s exactly what you needed to get more recognition,’ so it wasn’t a surprise.”

Natufe’s hair skills have also received appreciation outside of social media. In March, she was asked to compete in a hair show presented by student organization Naturally Y.O.U. and Texas State’s National Pan-Hellenic Council.

Natufe was one of four hairstylists in the contest tasked with styling the hair of different models. At the end of the competition, the audience voted on which hairstyle they liked best; Natufe won the hair show with 79% of the audience’s vote.

Similar to Robinson, Uju Offor, a nursing sophomore and high school friend of Natufe, agrees that Natufe’s TikTok fame was no accident.

“I wasn’t surprised because she’s actually talented like I was expecting it,” Offor said. “I was actually pushing her to post more videos on TikTok and stuff, so I was proud of her.”

Offor has been Natufe’s roommate for two years and says she has been impressed not just by Natufe’s professionalism but also how she has operated her business through COVID-19.

“For her age, she’s very professional, she has a website and all of that,” Offor said. “At the same time, she’s also taking COVID-19 precautions for her clients, like taking their temperature, having them wash their hands when they come in, having them put on their masks; she’s just the best.”

After graduation, Natufe says she wants to achieve her goal of becoming a civil engineer.

“Maybe I’ll establish a hair business, get a shop and have people work there, but I’m not actually going to [work there every day]; I think I’m going to retire,” Natufe said. “I want to give other people opportunities to work there while I’m doing my own thing.”

Texas State's Student Government released its results for the spring 2021 student government election on March 3. A total of 339 Texas State students voted in the election.

Volleyball gets swept by Jayhawks

According to the U.S. Department of Health and Human Services guidelines, teachers, school district employees and childcare workers are now eligible to receive a COVID-19 vaccine under the Tier 1B group in Hays County.