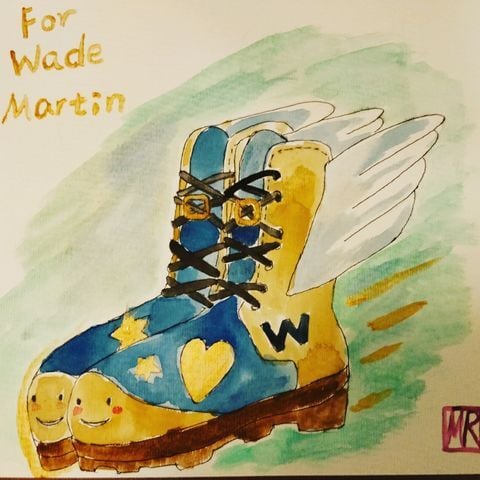 A painting by Rui Ma dedicated to Wade Martin and a poem he had written. Ma gifted the original painting to Martin as a gift for driving her to a volunteer session. She repainted it in memory of Martin and hopes the shoes can take Martin anywhere he wants to go in another dimension. 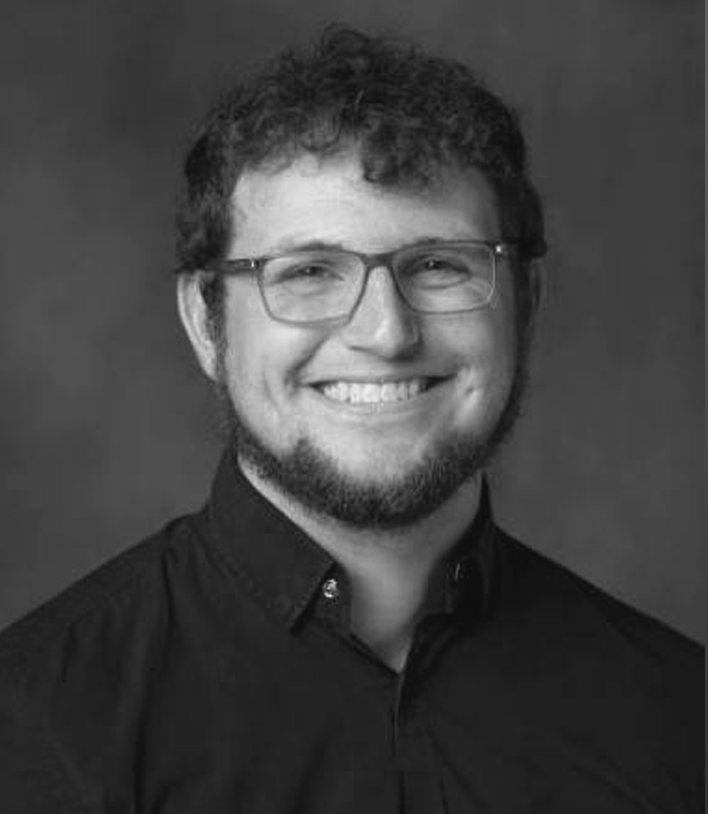 A photo of English lecturer and Texas State alumnus Wade Martin. (Courtesy of the Department of English) 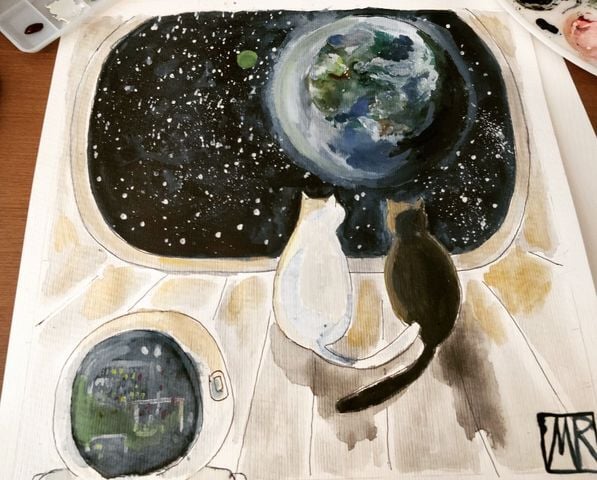 A painting by Rui Ma based on a poem she wrote to Martin called “Two Cats”. She painted the painting after having a dream of two cats starring at the universe from inside a spaceship a few nights after Martin’s passing. (Photo courtesy of Rui Ma)

It was a cold December morning when Wade Martin showed up to the San Marcos Farmers’ Market with nothing but his trumpet. He looked down on the instrument he had not played in ages, looking for an opportunity to brush up on his skills.

Martin walked up to the manager of the market, Kevin Adams, who just so happened to not have any musicians booked for that day, and asked him if he could play some music.

After receiving a simple “sure” from Adams, Martin picked up his trumpet and played Christmas carols for nearly two hours.

“At a certain time in his life, he would’ve told you that poetry saved him, made him sane, made his life a better place to live. He shared that with others so that they could discover that too,” Adams said.

Martin, a lecturer in the Department of English and Texas State alumnus, passed away May 12. Adams described Martin as an energetic and dedicated individual who lived with few fears. He said Martin’s battle with diabetes encouraged him to make the most out of everyday life.

“He had to always confront that fear of death at a pretty young age,” Adams said. “It put everything in his life into perspective. He was not afraid to start up conversations with strangers or random people.”

Martin’s openness shined the day he met Adams. From that day at the farmers’ market, the two grew to share a friendship that blossomed over poetry. Adams said Martin forced him to grow as both a writer and poet. He said Martin’s love for poetry encouraged him to become more public about his own poetry.

Martin’s enthusiasm for poetry developed during his time at Texas State where he earned a Master’s of Fine Arts in poetry and later became a lecturer for the Department of English.

Kathia Palacios, nutrition and foods sophomore, was a student in Martin’s English I class this past semester. Palacios said Martin was an incredible educator who cared deeply about his students.

With English not being her first language, Palacios said she would sometimes mispronounce words in class yet Martin always encouraged her to share her thoughts in class discussions.

“It was a good moment when he came into my life because he just switched everything around for me,” Palacios said. “He always made me feel welcomed in his class [and] would help me speak up about my ideas.”

As a writer, Palacios said Martin showed her how to develop her skills in English as well as helped enhance her vocabulary. Palacios said she appreciates the positive impact Martin has had on her as a student for he was encouraging and told her to never give up.

During his time as an MFA student, Martin was eager to learn and showcase his poetry skills. Kathleen Peirce, Department of English professor, had Martin as a student in her Experimental Forms Workshop class. Peirce said Martin was a student who was always happy to talk and could easily give or take criticism. She described him as a student who took on the challenges of the course with curiosity and a deep interest for creating something new.

“That’s ideal, that’s what we hope for in our graduate students and undergraduates—that they come through the door really curious and hungry to know more about the work that they have chosen to study so carefully,” Peirce said.

Inside and outside of the classroom, Martin shined with kindness and intelligence. Peirce said Martin was a frequent visitor during her office hours where he would talk to her about his love for and knowledge about poetry.

Martin was also a friendly individual who cared deeply for his fellow students in the MFA program. Rui Ma was a friend of Martin who would often attend workshops and volunteer with him at an elementary school in Austin.

When first arriving at Texas State, Ma said she was filled with doubt and pressure to fit in. During that time, Ma said Martin was there to help her by answering any questions she had and give her rides to workshops and readings when she didn’t have a car.

“He had this big concern for his classmates,” Ma said. “I know as a writer you’re really in your own head, and it’s very difficult to see other people compassionately, but Wade is so compassionate and [always] thinking of other people.”

Ma said she and Martin bonded over the struggle of coming from families in which both their parents disapproved of them pursuing a career in writing and poetry. She said the two grew to recognize one another’s struggles and related on pursuing their passions not for the money, but for the genuine love of it.

After attending a workshop where Martin shared an emotional poem about his father, Ma wrote a poem for Martin titled “Two Cats”. The poem focuses on a shared moment of two individuals who hope to carry their memory into another reality.

A few days after Martin’s passing, she had a dream of two cats looking at the universe from inside a spaceship. Reading the poem back, Ma said the meaning feels so true now and believes her dream was a message from Martin signifying he is now at peace in another dimension.

For more information about Martin and his impact on the community visit his online memory book on the Department of English’s website.