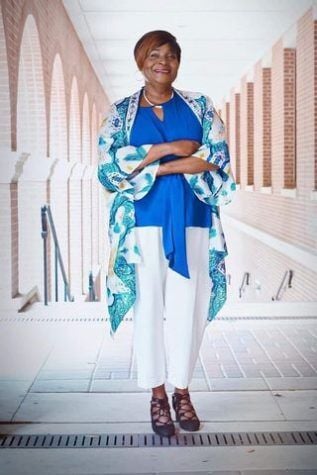 Jonnie Wilson smiles for a photo outside of the Undergraduate Academic Center. After 24 years of working at Texas State, Wilson has retired from her job in Career Services. Throughout her time at Texas State, she has touched the lives of students and colleagues with her encouragement and mentorship. (Photo courtesy of Jonnie Wilson ) 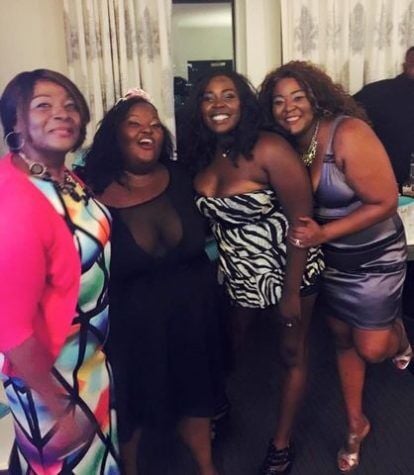 Jonnie Wilson and her three daughters smile for a photo. Jonnie says she wanted to attend college to set an example for her children and break the generational cycle in her family of not going to college. All three of Wilson’s daughters ended up graduating from college. (Photo courtesy of Jonnie Wilson ) 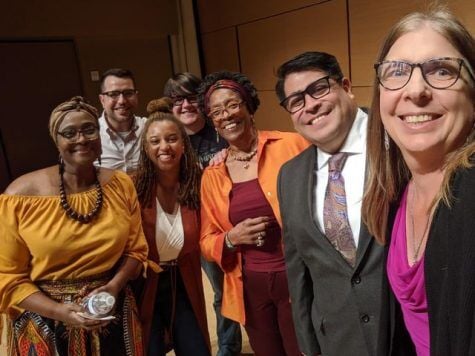 Jonnie Wilson (left) smiles for a selfie with other members of the Texas State and San Marcos community Thursday, Oct. 19, 2019, at The University Star’s Star Stories event in the Performing Arts Center. After 24 years of working at Texas State, Wilson has retired from her job in Career Services. (Photo courtesy of Jonnie Wilson ) 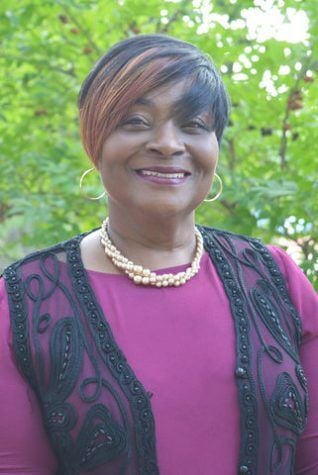 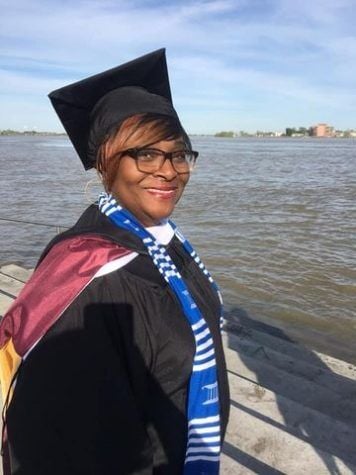 Jonnie Wilson smiles for a photo dressed in her Texas State graduation regalia. Wilson received her Master of Arts degree in professional counseling from Texas State in 2019. (Photo courtesy of Jonnie Wilson )

It was a typical workday for Jonnie Wilson as a hospital cook in Lockhart, Texas, when someone said to her, “You’re too smart to be working here.”

At only 22 years old, Wilson had just gotten out of an abusive marriage and was working multiple jobs, receiving food stamps and living in public housing, trying her best to raise three daughters.

Given her circumstances at the time, Wilson was surprised someone had given her such a compliment.

Her parents never attended college, and having gotten married at the age of 18, she had nothing but a high school diploma. Still, Wilson wanted to set an example for her daughters and embarked on a journey of discovering what she could do as a first-generation, non-traditional student.

Wilson arrived on Texas State’s campus in 1988 as a true freshman. From that point on, the university community became everything to her. Over 30 years later, after transitioning from a student to a staff member, she chose to retire, leaving a void in the heart of campus.

“I was known as the lady with the three children because my kids grew up on that campus,” Wilson said. “I ended up really finding the support that I needed and [figuring out] how much I could do.”

Wilson was able to juggle her role as a mother with attending classes full-time, both challenges that allowed her to grow as a person and in life.

“By the time I put my children to bed, [I’d be] studying until maybe three in the morning and then get right back up at five or six to see my kids at school,” she said. “And in between classes, I would come home and cook to make sure they had a good meal and yet I was [still] active on campus. I look back at that now, and I don’t know how I did that.”

Wilson received her bachelor’s degree in 1993 with a double-major in English and history along with a minor in women’s studies. She was the first Black woman at Texas State to receive the LBJ Outstanding Senior Student Award, the highest award granted to graduating seniors.

After graduating, Wilson received the Thurgood Marshall Fellowship and attended the University of Missouri-Columbia, where she received a master’s in history in 1996.

A friend and former colleague of Wilson, Diann McCabe, says Wilson is not someone who needs a lot of credit but is someone who deserves all of it.

“She doesn’t call attention to herself, but she seems to understand life in the deepest ways,” McCabe said. “She’s worked so hard to build a life for herself and her daughters, and she’s overcome amazing obstacles, and she’s just never let that get her down.”

In 1996, Wilson returned to Texas State and has served students in three positions across different offices on campus ever since. Her name is recognized throughout the Department of Housing and Residential Life, the Office of Student Diversity and Inclusion and Career Services, where she recently retired from.

In over 18 years as the assistant director in the Office of Student Diversity and Inclusion, Wilson’s passion for serving students and giving back to the Texas State community thrived.

She implemented numerous programs such as the African American Leadership Conference, the MLK Commemorative March and Celebration, as well as Mama’s Kitchen.

Now a large part of Texas State tradition, Mama’s Kitchen grew from Wilson’s love of cooking for students who stopped by her office for a home-cooked meal.

“Mama’s Kitchen is pride and tradition. It was just a way of students to sit down in fellowship, and to me, [food is] something that everybody has in common,” she said. “It doesn’t matter what color you are, race you are, creed you are.”

Known as “Mama Wilson” or “Mama Jonnie” to the students that knew her, Wilson opened her office in SDI to everyone. It was not only a place to get a good meal but also a place where students could feel at home and have someone to talk to —someone they knew would listen.

One of Wilson’s former students, Jessica Dawson, says Wilson genuinely cared about her students and would check up on them to see how they were doing both academically and professionally.

“I would call the office and be like ‘Is Ms. Wilson there?’ and if she was available she would drop what she was doing and let us come in the office,” Dawson said. “She would pick up her cellphone and give us a call and ask us what was going on.”

Wilson’s ability to make herself available to anyone who needs her is a trait anyone who knows her can attest to.

Bridget Sarbu, a career adviser who had the opportunity to work with Wilson during her short time in Career Services, says she admired Wilson for the way she completely dedicated herself to the students who came into her office.

“She provided this warm and open space. She always had an open door, but when she listened to [students], she actually heard them and then tried to implement policy that would help them,” Sarbu said. “If you can continue to listen to people and actually hear them and work toward alleviating problems that they have, that is timeless, and I think Jonnie really perfected that.”

As a first-generation student herself, Wilson understood the importance of being an active member on campus and made sure her students got involved and acknowledged the resources available to them, as she did as a student.

Gerald Scott Jr., a student close to Wilson, says although he was involved on campus through basketball and his fraternity, the only way he knew about campus resources was because Wilson encouraged him to take advantage of them.

“You can tell she not only cares, but she really loves us. So anytime new students or new freshmen come it’s like, ‘You gotta know Mama Jonnie’,” he said. “If you get to know her, you’re going to succeed because she’s going to make sure you [know about] things going on on campus.”

After 24 years of working and serving the Texas State community, Wilson hopes to leave a legacy of love. She says because everyone helped her when she needed it, she wanted to help others in that same way to show that love can come in all forms.

Director of Career Services Ray Rogers says Wilson’s empathy and compassion for people are what attracted students to her. They knew she was able to understand and support them.

“Jonnie was an institution herself,” Rogers said. “We may be able to find a great career counselor to fill her position, but we won’t be able to replace Jonnie and the gifts she gave us at Texas State.”

Wilson received a second master’s degree in counseling from Texas State in 2019. Now retired and living in San Antonio, Wilson is working in private practice and is continuing to serve others the way she did at Texas State.

To learn more about Jonnie Wilson, check out Texas State’s Career Services podcast “A Walk Through Texas State” and its episode featuring Wilson, “Your Gifts Will Make Room for You.”