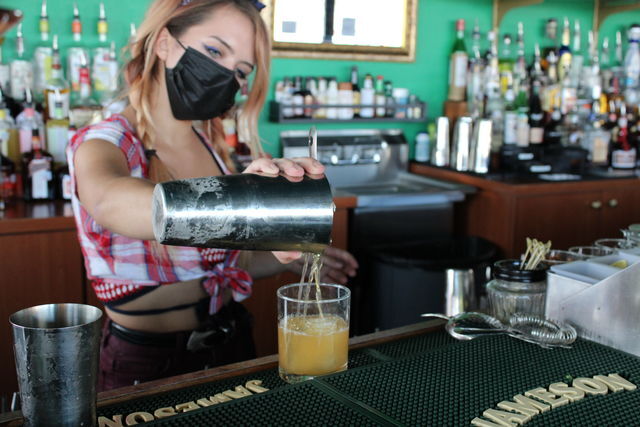 Bartender Olivia Ferguson pours up a cocktail for a guest Monday, Sept. 7, 2020, at The Davenport’s bar. The Davenport is located on 194 S Guadalupe St. and serves up a variety of Spanish influenced dishes along with original drinks. 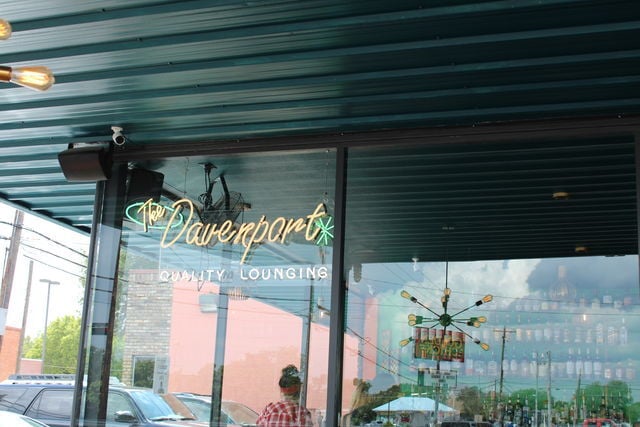 Exterior view of The Davenport, Saturday, Sept. 5, 2020. The Davenport is one of the lastest restaurant bars to join the San Marcos dining scene. (Vanessa Buentello) 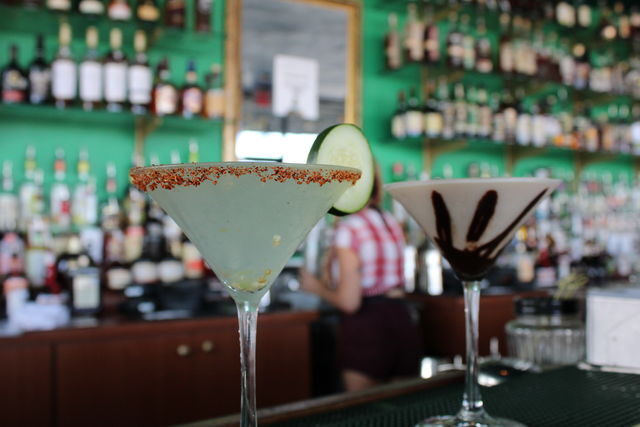 A “Spicy Cucumber Patch” martini and a “Tilt a Whirl” martini sit on the bar Monday, Sept. 7, 2020, at The Davenport. (Vanessa Buentello ) 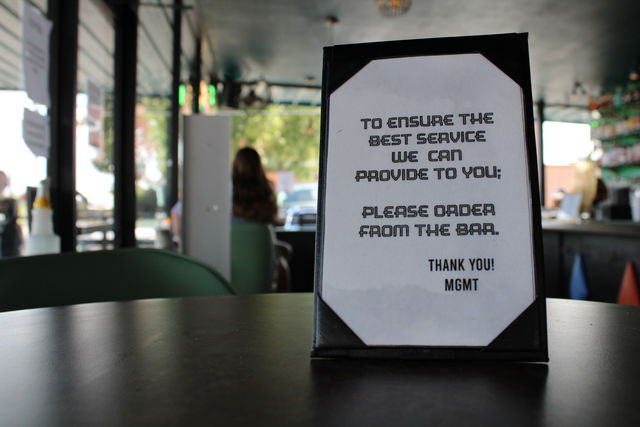 A sign asks guests to make all drink and food orders at the bar, Monday, Sept. 7, 2020, at The Davenport. (Vanessa Buentello)

Originally from Houston, The Davenport, located on 194 S Guadalupe St., opened its first location almost 30 years ago. The restaurant bar wanted to branch out to the Hill Country and jumped on the location of what used to be The Buzz Mill, back in December.

The Davenport’s San Marcos location officially opened its doors July 31 following a delay due to COVID-19.

With plans to originally open around April, construction was postponed after the site was unable to utilize contractors. General Manager Katie Lorkovic says staff members had to finish construction themselves.

“It took quite a bit longer. We painted, laid wood, tile, we did it all,” Lorkovic said. “We definitely have more of a sense of pride for the bar. And we were able to pull it off in time to open during the summer.”

Open daily from 11-2 a.m., The Davenport witnesses a different pace of clientele throughout the day. Lorkovic says anyone from day-drinkers to families visit during the day. Clientele shifts to 21 and up around 10 p.m.

“Business has been surprisingly great with everything going on and being new in the area,” Lorkovic said. “It’s a lot busier than we ever anticipated, but it’s not a bad problem to have at all.”

The Davenport believes it stands out from the current scene in downtown San Marcos due to its mid-century modern style. Lorkovic says they consider themselves a quality lounge, offering a higher level of drinks.

The drink menu defines a lot of the character of The Davenport. All martinis, cocktails and shots are crafted from original recipes, allowing the restaurant to have a fun play on the names of its drinks.

There’s the “Bloody and Bruised” martini, “Barbie’s Bathwater” cocktail and “Pretty Fly for a Cacti” shot, to name a few. The Davenport has a shot named after “Frisbee Dan,” a man well-known throughout the community for playing frisbee at Sewell Park.

The atmosphere is noticeably different from a typical bar on The Square. The Davenport offers a large covered and uncovered patio seating area for guests to enjoy, providing more of a relaxing space.

“The environment here is really light and energetic, which is kind of a break from the typical dark or grunge bar look,” Nishiyama said. “I like how this place is kinda meant for you to come in, take a step back and take in everything.”

The Davenport’s other locations are strictly bar service only. However, since the building of the San Marcos location came with a kitchen, it is the first location to also serve food.

Lorkovic says the food menu is based on Spanish influence. The kitchen stays open until 1:30 a.m. and offers a variety of dishes from burgers to sandwiches to paella.

“The kitchen was always the plan, even pre-COVID,” Lorkovic said. “We were really lucky to be able to use the kitchen as an advantage after the state closed down bars. If we hadn’t decided to try cooking out, we might have never been able to open for business.”

Since opening, The Davenport has enforced all COVID-19 safety measures. Signs around the property remind guests that masks are required unless seated at their own table. Seats and tables are spread at least 6 feet apart, with no more than 10 people allowed in one party.

At night, more seating options are moved outside to ensure the number of guests inside stays at capacity. Extra security is also present to ensure individuals follow social distancing and safety guidelines.

“The Davenport really is a ‘good vibe’ kind of bar,” said Nick Louhela, a San Marcos local. “It’s a fun place to hang out with your friends, and it’s definitely more of a laid back setting to enjoy a drink.”

With a brunch menu, late-night menu, outside Tiki bar and a coffee stand currently in the works, The Davenport is excited for its future in San Marcos.