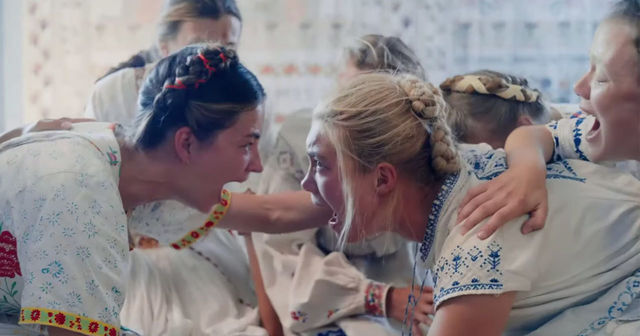 Midsommar is a wild two-and-a-half hour ride of pure terror as you follow a group of friends visiting a cult in the middle of nowhere.

Ari Aster is quickly becoming one of my favorite writers and directors. If you have not seen his first movie “Hereditary,” I highly recommend watching it. Aster keeps his style going in “Midsommar” and runs with it throughout the movie.

In “Hereditary,” the third act that wrapped up the movie was mind-blowing, but to be specific, the last ten minutes made viewers either love or hate it. Midsommar is that last ten minutes, but stretched out for two-and-a-half hours.

A group of friends, stranded in the middle of nowhere consist of the typical dynamic: a smart one, a dumb and funny one, a boyfriend and a girlfriend who think they are fine, but the audience knows they are not. “Midsommar” is great because the audience believes they are in the setting with the rest of the characters. While I understand the perception of this movie may be better if it was shortened by 30 minutes, I loved the length of the film and did not want it to end.

Aster does an amazing job pulling viewers into the crazy community the main characters are stranded in and making the audience want to learn more about the culture. I never thought the plot slowed because I was invested throughout the movie.

Audiences have to be on the lookout for any hints or clues Aster provides throughout the movie because everything comes together in the end. While I do not think the storyline was as good as “Hereditary,” I believe this puzzle of a movie fit together well. If someone likes horror movies packed with jump scares and fast-paced action, then this movie isn’t for them, as it is a slow burning and unsettling artsy-type of horror.

“Midsommar” is a film someone has to go back and see to catch the little things missed the first time around. The movie juggles a lot of subplots and can sometimes get a little too messy and take away from the actual story. The horror aspect is great and the acting is on par. The world Aster built makes viewers feel like they are losing their minds alongside the rest of the characters in the movie.

Although “Midsommar” was not on the same level as “Hereditary,” it definitely leaves its mark. Aster is an up-and-coming horror mastermind everyone should look out for. He’s no Stanley Kubrick, but his style is very Kubrick-esque.

Aster masters horror and his take on the genre is a breath of fresh air. His horror will make viewers think about what they just saw and feel uneasy as they leave the theater. “Midsommar” has the ability to creeped audiences out and lose their minds for a long and interesting time. For that, I give the film 8.5/10.