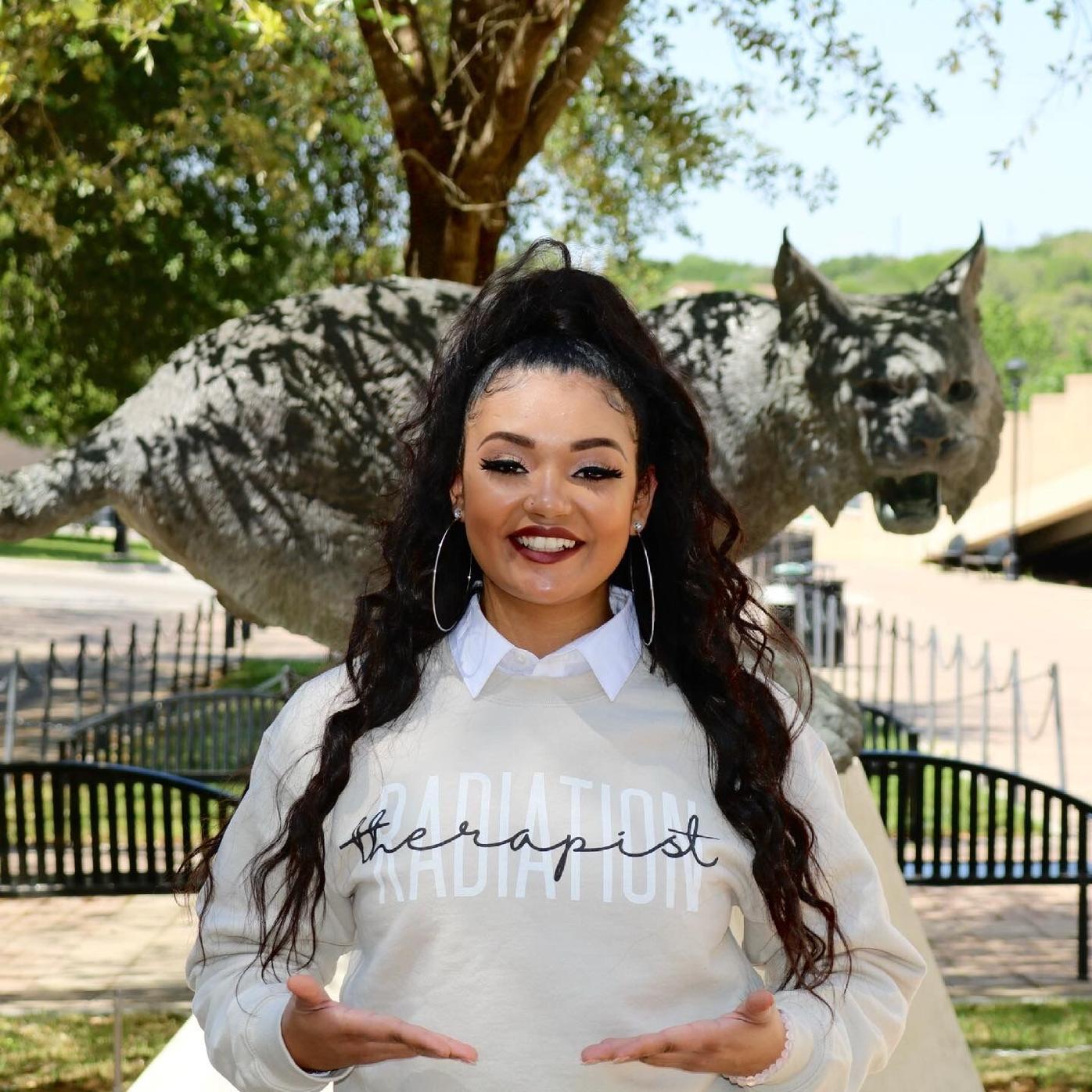 Arianna Apodaca smiles for a graduation photo wearing a sweater that says "Radiation Therapist." Now graduated, Apodaca hopes to go to medical school. Later on, she dreams of opening her own oncology site. 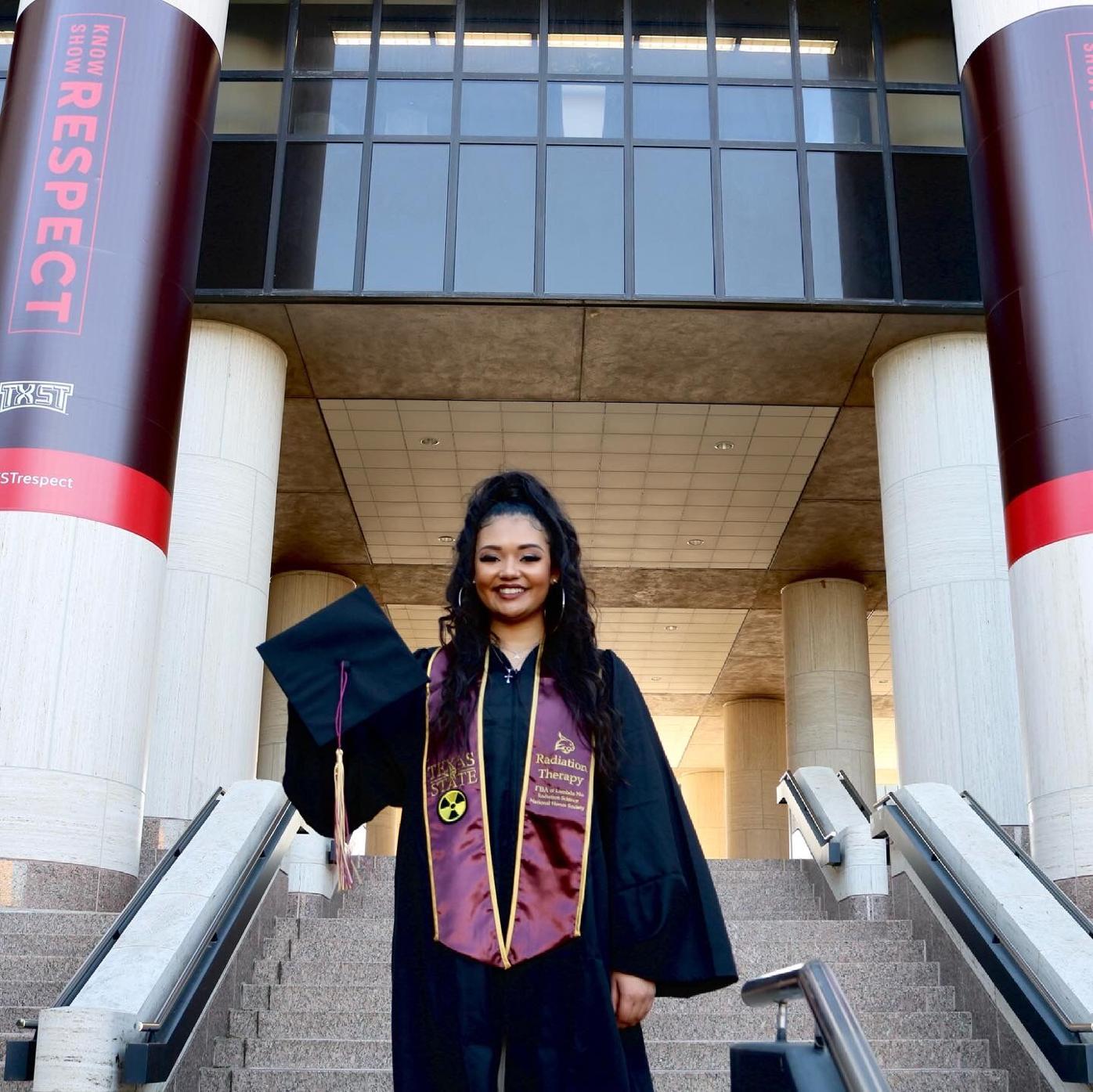 Arianna Apodaca smiles for a photo dressed in her Texas State graduation regalia. Apodaca is a a two-time breast cancer survivor who graduated in May 2021 with a degree in radiation therapy.

Hours before she was scheduled to be in class, Arianna Apodaca began her trek to campus, pacing herself on the hills and stairs, bearing the effects cancer and chemotherapy had on her body.

Even after completing treatments, reconstructive surgeries left her unable to lift her arms, causing her to walk from class to class with only one backpack strap on her shoulder.

Apodaca first stepped foot on Texas State's campus as a freshman in 2017. She was studying radiation therapy but had no idea that four years later, she would be graduating college as a two-time breast cancer survivor.

Just days before her 20th birthday, Apodaca was diagnosed with invasive ductal carcinoma for the first time. She dealt with the reality of her diagnosis away at college as her father lived in New York and her mother died when she was in high school.

Apodaca supported herself independently throughout college, by working and through funds raised on GoFundMe. She knew if she left school, there would be nowhere else for her to go.

"I just always had that mentality. The world doesn't wait for you," Apodaca says. "And so, I just kept working and pushing through."

After her diagnosis, her degree in radiation therapy took on an entirely new meaning. For Apodaca, her diagnosis was something deep and concrete she could connect to with her patients, making her more invested and empathetic to their experiences.

"At first, you know, it's like, 'Why me?,’" Apodaca says. "But when I actually started going through my clinical rotations, it changed, like a lot. Like, you could do all the research in the world and read all these books and stuff, but you really don't know what it feels like to be that person that's being treated. When my patients cry, I cry right with them. I'm like, 'I know exactly how you feel.'"

Apodaca stayed in school throughout her treatment. During her first journey with cancer, she underwent 16 rounds of chemotherapy. She recalls the first four rounds, known as the "Red Devil," often leaving her tired and unable to get out of bed.

Apodaca's sisters took turns accompanying her to doctor's appointments, but they did not live together. Although she didn't have relatives nearby at all times, Apodaca found comfort knowing she could depend on one of her best friends and roommate, Deyonne Bonner.

Whether it was helping her get dressed or cleaning their apartment, Bonner never thought twice about helping Apodaca.

"Honestly, it kind of made me feel happy that I was able to help her because strong people don't depend on other people a lot, so the fact that I could be there to help her made me happy because that's one of my best friends," Bonner says.

For those closest to Apodaca, like Bonner and Stearling Gale, her older sister, witnessing her continue to focus on academics throughout her diagnosis reassured them that she was doing okay.

"School is something that Arianna has always been dedicated to," Gale says. "She's been a straight-A student her entire life. That was something that let me know it was going to be okay. Even if [school] wasn't a distraction, I was thankful she had it because it's something she cares about."

In her initial journey, Apodaca struggled not only with pain and weakness but with the loss of her signature features. For Apodaca, the hardest part was losing her hair.

Before losing it, Gale says Apodaca's hair was one of the key physical traits people noticed when they first met her sister. It was devastating to watch her sister lose all of it.

"Arianna's hair was one of those [physical traits]. She was known for her curls, her afro, the way her curls were a unique texture," Gale says. "It was something she identified with her whole life. It was a part of who she was."

Gale says her hair loss brought out negativity in her sister that was unlike Apodaca's creative and authentic persona, but she knew her sister would grow past it.

By the end of September 2019, Apodaca was cancer-free. Her hair was growing back, and she had maintained a high GPA and Dean's List recognition in school. She was in remission for eight months, until May 2020, when she was diagnosed with invasive ductal carcinoma again in the same breast as before.

Throughout the pandemic, Apodaca stayed busy working at H-E-B and attending classes. As before, staying occupied helped keep her mind busy and emotions strong. In fall 2020, Apodaca began clinical rotations at the same doctor's office where she simultaneously received chemotherapy.

"I got put at my doctor's office for my clinical rotation, so I would treat patients all day, and then, whatever days I had chemo, I'd just walk to the back, get chemo. And then hurry up and try to recover over the weekend, so I could be back the next week," Apodaca says.

During her rotations, she connected with other cancer patients, giving her career path a new meaning.

Apodaca has been cancer-free since January 2021. She says although many people see a second cancer diagnosis as tragic, she's glad it happened the way it did because it made her stronger. Now, she's able to connect with her patients on a new level and let them know they can handle whatever life throws at them.

"I've literally seen the patient's attitude shift, like major," Apodaca says. "Like people that weren't eating before, now they're eating, people that were crying every day, they're happy. I've just, I've seen my story change other cancer survivors' lives. So, it just makes me even more passionate about my field and the work that I do."

Besides maintaining good grades throughout college and her cancer journey, Apodaca stayed active on campus where she served as vice president for the Pre-Radiation Therapy Organization and as the social media coordinator for the Be the Match bone marrow drive, where she signed up people of color like her to donate marrow and save lives.

Bonner says she couldn't feel prouder of Apodaca for coming out on the other side of her cancer journey with all of her incredible accomplishments.

"I've pretty much known her all throughout college, so just seeing her from where we were to now, she's so much more of a stronger person," Bonner says. "It's like, she's a little bit more determined. She honestly makes me feel like I can do anything because she's shown me that she can do anything despite what she's gone through. Whatever she wants, she gets."

Apodaca has similarly inspired her oldest sister, Keyessense Cox, who is incredibly proud of the person Apodaca has become. Apodaca graduated in May 2021 with a bachelor's degree in radiation therapy and is the recipient of the LBJ Outstanding Senior Award.

"I feel like she deserves [the recognition]," Cox says. "I feel like it's a good confidence booster for her, especially going through all of this where she felt kind of alone at times."

With a degree under her belt and lifetimes of growth, Apodaca plans to pursue a doctorate in osteopathic medicine, and, in the future, open her own oncology site. She wants to provide a combination of cancer treatment and holistic treatment, helping those, like herself, who needed the specialized treatment.

"I feel like this is where she's supposed to be," Cox says. "Everyone has their niche and their purpose, and I feel like this is her purpose and it's just so great to see her do what she's destined to do. I'm just excited to see what's in store for her."