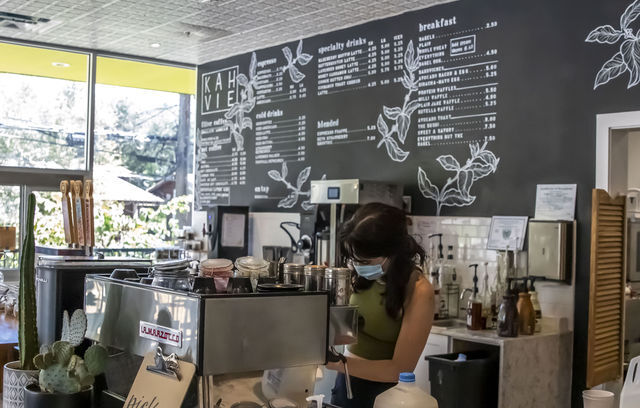 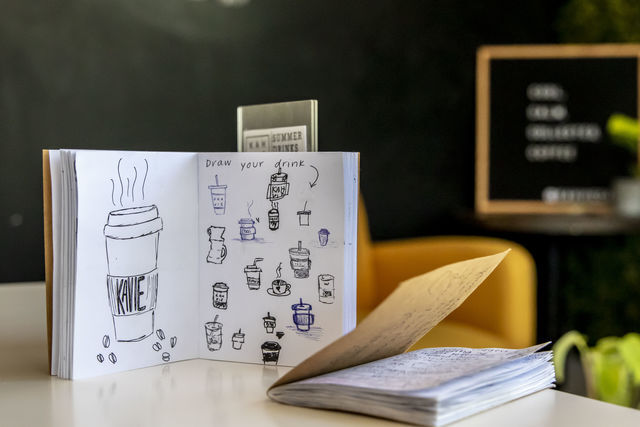 Kahvie Cafe sets up "customer books" for people to write and draw in while sitting at a table, Wednesday, Sept. 8, 2021, in San Marcos, Texas.

With more than a dozen coffee shops adorning the streets of San Marcos, the city has a big market for caffeinated beverages.

Spanning from Texas-born shops and CBD-based drinks to international franchises like Starbucks, each San Marcos coffee shop has its own crowd and committed customers, regardless of the masses of fellow competition.

Kahvie Cafe is a newly opened coffee shop that prides itself on getting to know its customers. Christa Brewer, a barista for Kahvie Cafe, said the shop had a tough start when it opened, due to COVID-19 pandemic. However, the establishment has since grown into a community that cares for one another.

“I think that's what makes us kind of unique is we really like to, you know, get to know our customers. We like to do some like customer connections, take pictures with them, do some personal like quizzes to get to know them and things like that. We like to really be personal with our customers," Brewer said.

Brewer describes Kahvie as not the usual coffee shop. Rather than going for neutral, fall-like themes that coffee is usually associated with, Kahvie is a bright and upbeat cafe, according to Brewer.

“Rather than like a chill vibe, we kind of have like an energetic kind of vibe,” Brewer said. “Everyone's kind of talking, we would say it's like a very, you know, relaxed environment, but open and kind of our goal is to always be welcoming to everyone that walks in here.”

Community connections are a commonality at coffee shops throughout the area. Wake the Dead Coffee House is a local coffee shop that's been serving the San Marcos community since 2008. Located on Old Ranch Road 12, Wake the Dead is a home-like building with a stage and courtyard for live music performances, comedy nights and even chair massages. The shop is open until midnight every day.

Peyton Leonard, a theater sophomore, is a regular customer at Wake The Dead and has even memorized the different drink options the coffee shop provides. Leonard said it's Wake The Dead's quirky community environment that keeps her visiting nearly every day.

“It's almost like a family household vibe in a sense,” Leonard said. “It's like if you were just [to] go and chill in someone's backyard. It's kind of like that, rather than going up to a Starbucks barista and formulaically placing your order.”

Having also worked for small businesses in the past, Leonard sees the effort the shop puts in to building community. She appreciates how intentional employees are with getting to know their regular visitors by meeting their dogs and engaging in conversation rather than rushing to make their orders as quickly as possible.

“It’s more than just a coffee place … I always meet really cool, different kinds of people there. I think I've seen the most diverse group of people there, honestly," Leonard said.

A number of other coffee shops decorate the San Marcos area, each providing a unique atmosphere catering toward specific niches and communities.

Locally owned Lazy Daze, for example, takes pride in its CBD-infused coffee that allows customers to try caffeinated drinks that focus on lowering stress. India Earhart, a barista at Lazy Daze, loves providing unique coffee drinks knowing her customers drink it with the intention of wellness.

“I drink it every day,” Earhart said. “Caffeine is more of an upper, and the Delta 8 or CBD helps with anxiety. I know a lot of people get like anxiety drinking coffee, so it kind of balances that out.”

Mochas & Javas, another competing coffee shop with locations throughout San Marcos, can be recognized for its laidback, cozy style. The franchise has three local locations; one at 700 N LBJ Drive, another at 102 Wonder World Drive and even one located inside H-E-B on 641 E Hopkins St.

Julie Walker, a psychology sophomore, has been a frequent visitor at Mochas & Javas for over a year, despite not being that big of a coffee fan. To her, the shop's positivity, gluten-free alternatives and hot chocolate are some of her favorite things about it.

“I like to study here. It's very nice to just like sit and calm down,” Walker said. “It has very nice chill vibes where you can just sit and relax.”

As someone who often takes advantage of the outdoor seating Mochas & Javas provides, she also loves seeing Bubble Believers, a Texas State alumnus known for blowing bubbles and speaking positive affirmations, at the street corner nearby the shop's LBJ location. To her, the coffee shop’s welcoming atmosphere combined with the bubbles and affirmations creates the perfect environment for destressing after a long day of classes.

Jordan Gray, the manager of Mochas & Javas’ Wonder World location, believes the shop's warm and homey vibe is a cherished investment to the San Marcos community, setting it a part as one of its greatest assets.

"We want to just make it feel welcoming to everyone," Gray said. "Whenever people come to support our locally owned businesses, they're economically supporting their community as well. That money goes back into the community and back into like the families that actually live here."

Timia Cobb contributed to this story.