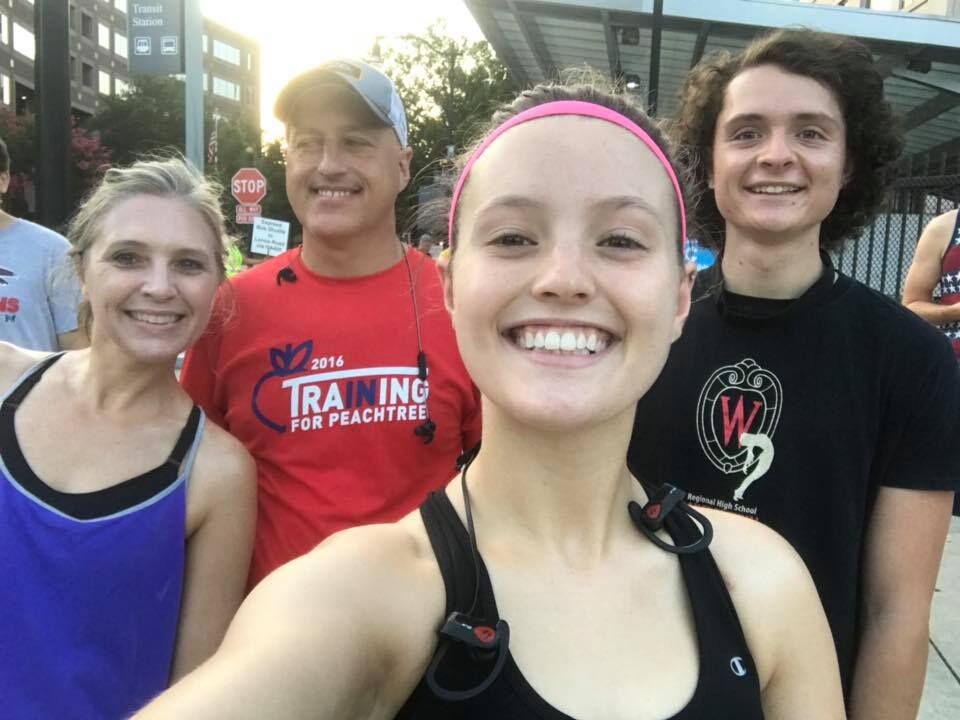 Abigail Remaley, a senior acting major, and her family smile for a selfie after running the 2018 AJC Peachtree Road Race in Atlanta. 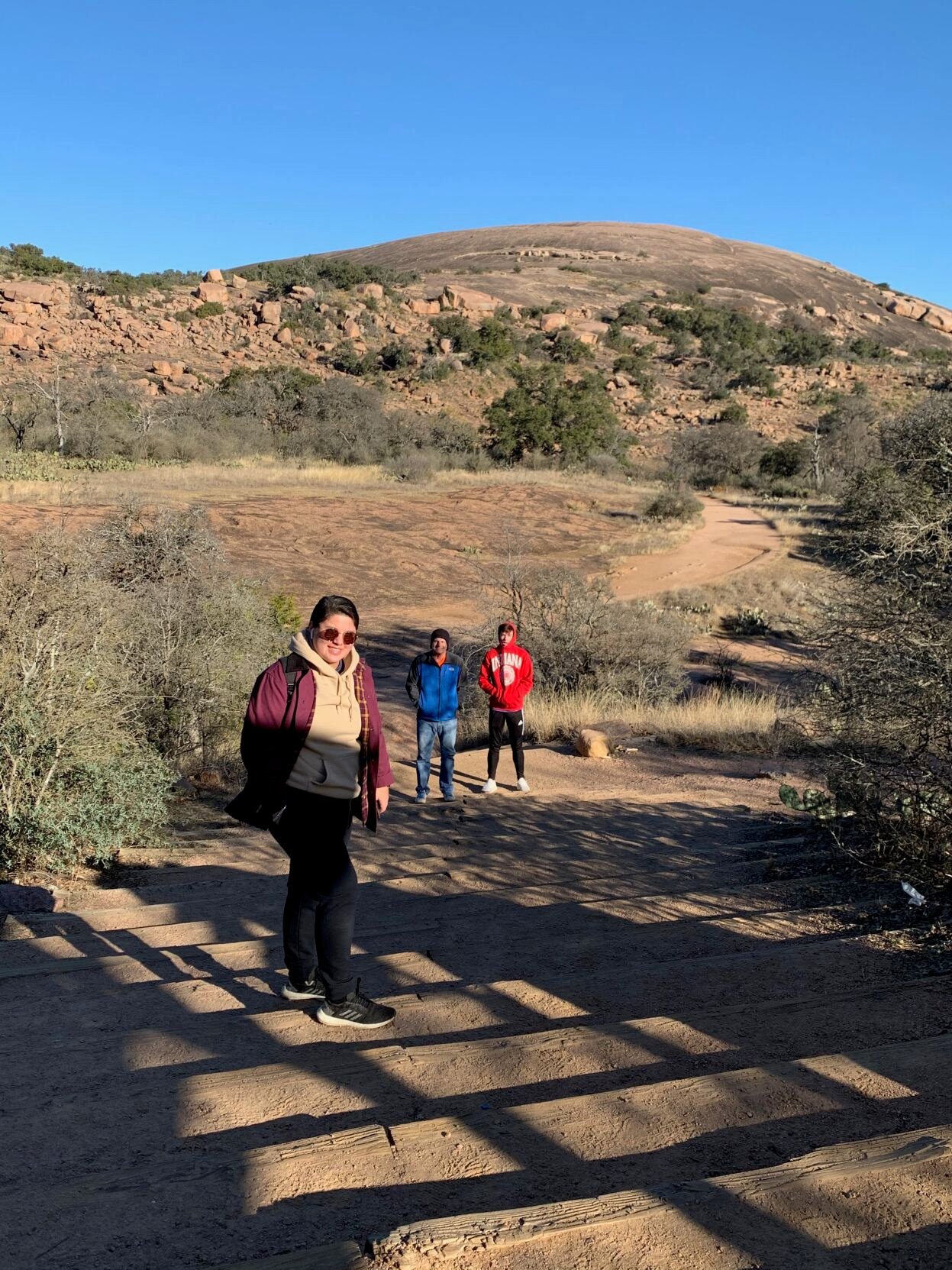 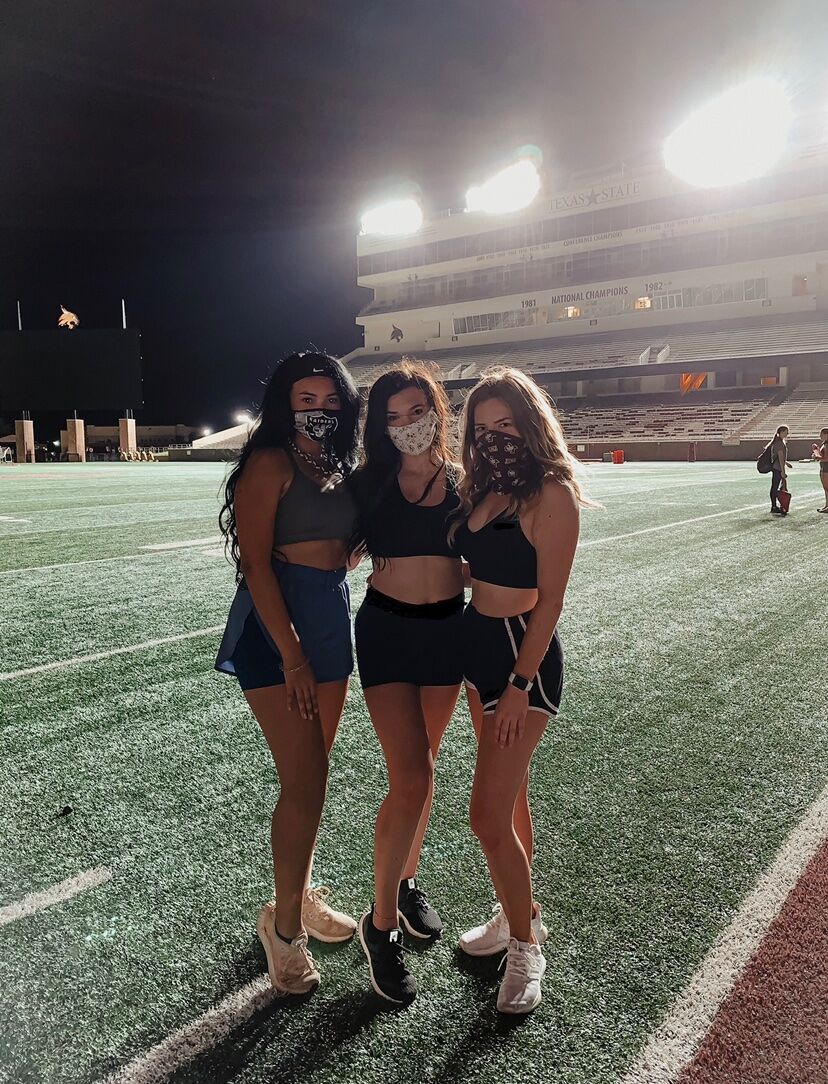 Ashley Mann, a communication studies sophomore, and two of her fellow Strutters, Marissa Santos and Carsyn Collins, smile for a photo after practice at Bobcat Stadium in fall 2020. 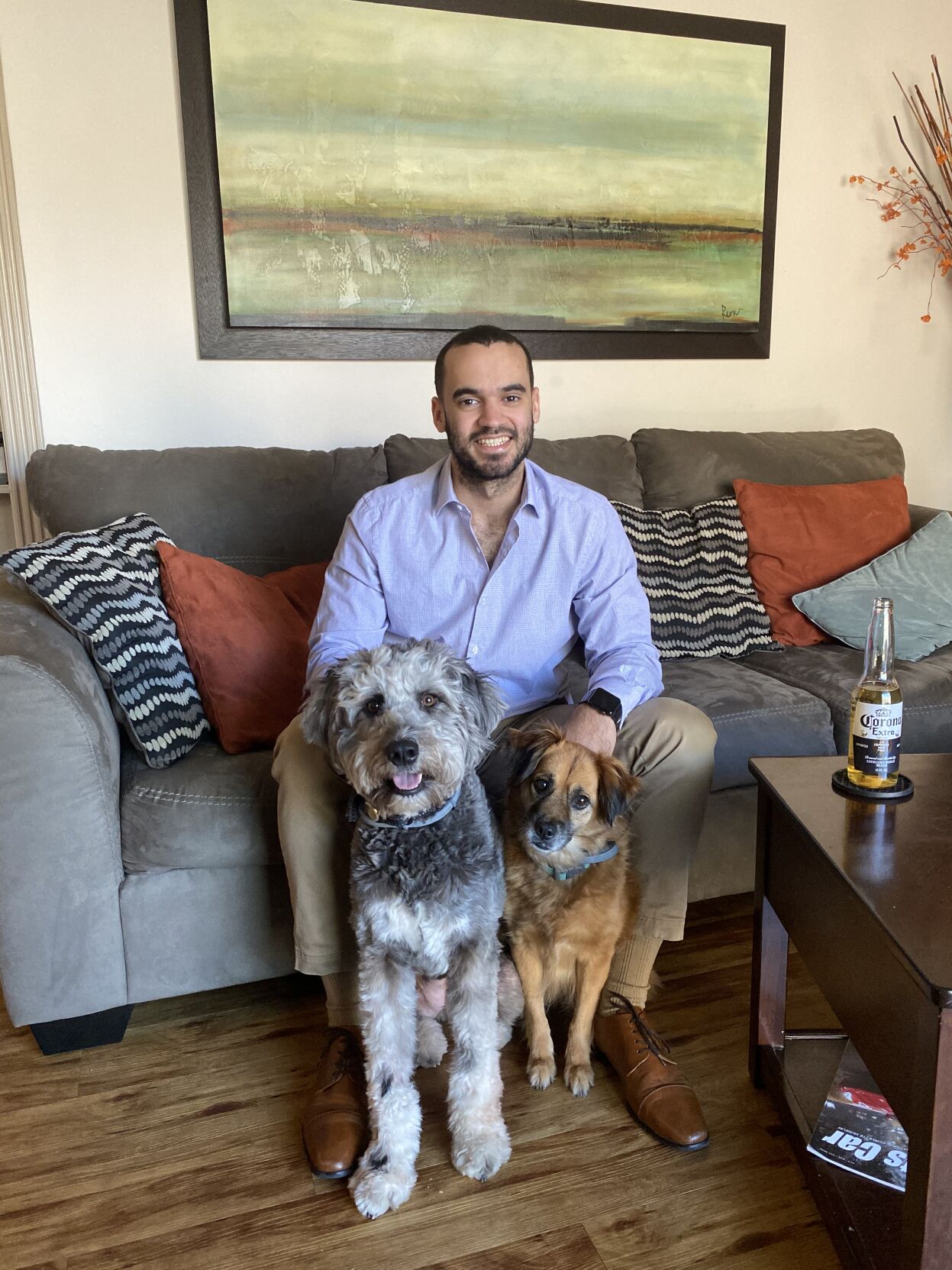 Andrew Stanton, a business graduate student, and his two dogs, Remi (left) and Molly (right), in their San Marcos home. The trio stays active by going on multi-daily walks around their neighborhood and local hiking trails. 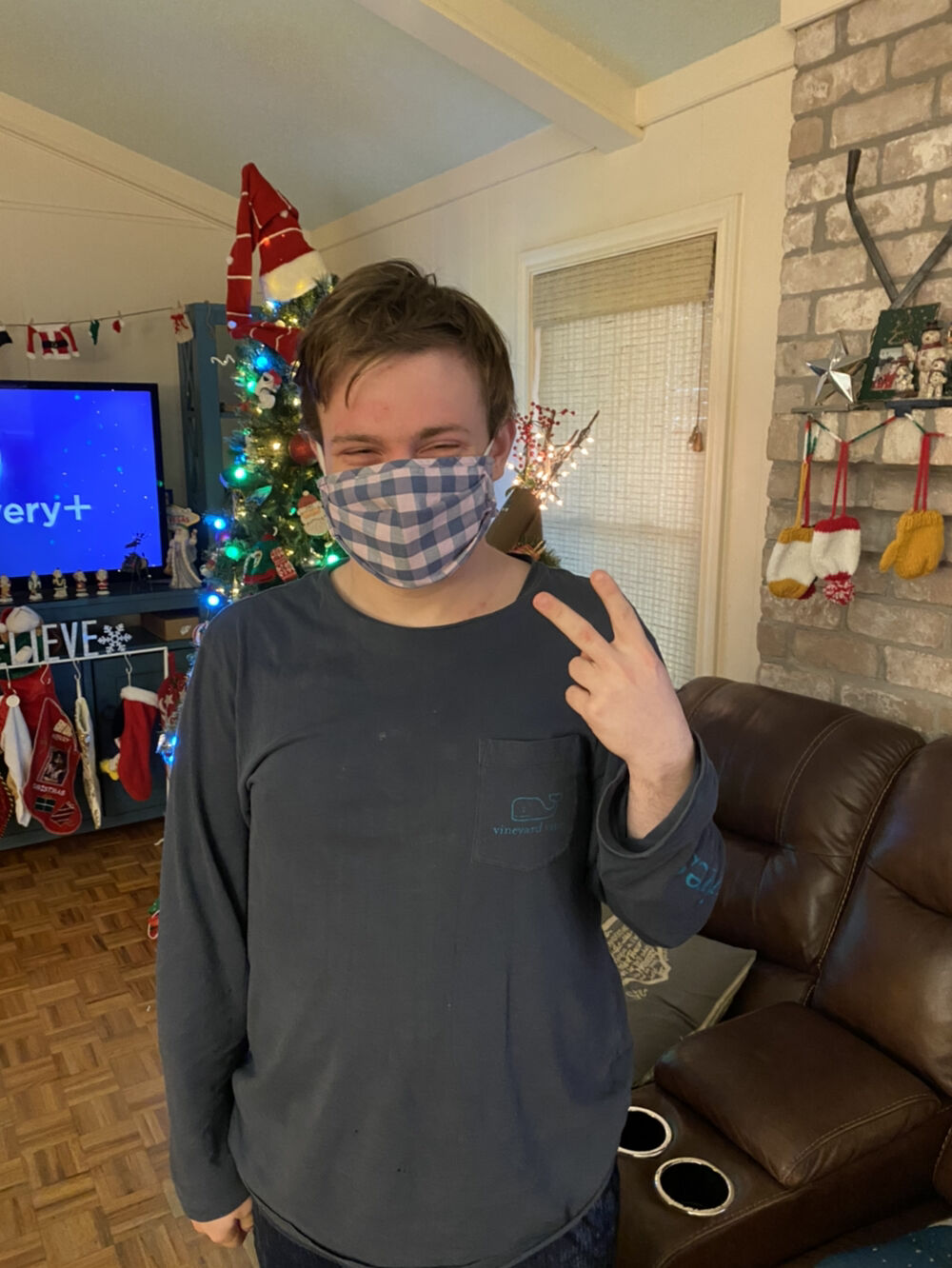 Lance Spivey, a biochemistry sophomore, smiles for the camera after a run around his Houston neighborhood.

From saying farewell to finals in the fall to the excitement of a New Year's toast, Texas State students from across the country have committed to maintaining an active lifestyle as they head into 2021.

Since the start of COVID-19, being holed up at home has become a commonality to remain safe from the virus, with some people choosing to neglect public exercise facilities like gyms or parks. However, Texas State students like Abigail Remaley, an acting senior, are still finding ways to stay active.

Surrounded by a family of bikers, joggers and hikers, Remaley learned from a young age the mental and physical benefits of an active lifestyle. Each morning, she motivates herself to go outdoors by walking, jogging and running laps around the trails of her Georgia neighborhood.

“I just feel way better staying active,” Remaley says. “I think it affects my mental state, and I feel happier.”

Studies conducted by Harvard Medical School, Yale Medicine and the Centers for Disease Control and Prevention, prove regular physical activity can be used as a therapeutic for reducing individual risk of depression and anxiety.

Active therapeutics have been especially helpful for Lance Spivey, a biochemistry sophomore, who runs three to four miles quasi-daily around his Houston neighborhood. Spivey sees his morning run as the one time in the day when he can fully commit to soaking up some vitamin D and traveling to his “zen place”.

“That time is when all my inhibitions are gone,” Spivey says. “All that’s left is just me caring about myself and wanting to be happy.”

Both Spivey and Remaley use this mental drive to strap on their shoes every morning, while others find motivation from outside sources like family and friends. Sam Beckman, a musical theatre sophomore, finds encouragement from her on-the-go family.

On Christmas Eve, the family made a trip to Enchanted Rock to celebrate her mother's recovery from knee surgery. Alongside her mother, her junior olympiad brother and her avid marathon runner dad, Beckman braved the hike up the 1,825-foot slopes.

“My entire family is way more active than I am, so they inspire me a lot,” Beckman says. “During quarantine, we have no reason to do anything or be anywhere, so it’s good to give yourself something to be accountable for, like going for a walk.”

As a line officer for the Texas State Strutters, Ashley Mann, a communication studies sophomore, knows firsthand about the importance of accountability. Each week, she reaches out to her fellow Strutters to ensure they are completing their weekly workouts while also holding herself accountable.

“We all want to make sure we’re getting the active time in,” Mann says. “We’ll reach out every few days to ask, 'Hey, did you work out the last few days?' And if no, then we’re like, 'Okay, we’re gonna get together.'"

Accountability and social support are key motivating factors, according to the U.S. Department of Health and Human Services, to help people stay active and engage in exercise. Because of this, a group like the Strutters with built-in accountability measures has been key to assisting Mann's fitness journey while at home in Cibolo, Texas.

To save money that would go toward a gym membership, Mann focuses her activity primarily on neighborhood runs and at-home ab workouts. Andrew Stanton, a business graduate student, also tries to avoid gym costs by taking his dogs, Remi and Molly, outside for multiple walks each day.

“I like staying active because I feel like it opens your mind to new ideas,” Stanton says. “If you walk down the street, you might see a hundred different items, and it might spark new ideas in your mind.”

He varies his paths by switching between short walks down the street and multi-mile hikes along San Marcos trails. As an aspiring businessman on the lookout for his next big idea, he sees the numerous benefits of getting out of his bedroom to experience a change of scenery.

While some may argue that exercising is a brain stimulant, others view physical activity as an escape.

Willa Fossum, an acting senior, relies on daily walks, runs and exercises to provide a mental reset for the moments when her mind feels out of control.

Each morning, she begins her routine by going on a three-mile run and following it with a circuit of calisthenics, such as pushups or situps. Like Spivey's neighborhood runs or Stanton's hikes, Fossum says exercising gives her a sense of security and fulfillment that carries her through each day.

"I find that mental and physical health are really connected,” Fossum says. "The endorphins really make me feel like I’ve accomplished something first thing in the morning."

Just like Fossum, Spivey strives toward this rush of accomplishment every time he laces up sneakers and heads out the door. From a young age, he learned daily exercise is key to well being, thanks to the teachings of his favorite 2000's comedy, "Legally Blonde," where fictional Harvard graduate Elle Woods, clad in a pink legal suit, educates jurors on the mental benefits of moving around.

Spivey, along with Beckman, Remaley, Mann, Stanton and Fossum, plans to continue his journey toward happiness into 2021 by consciously making time for activity while back in San Marcos for the spring.