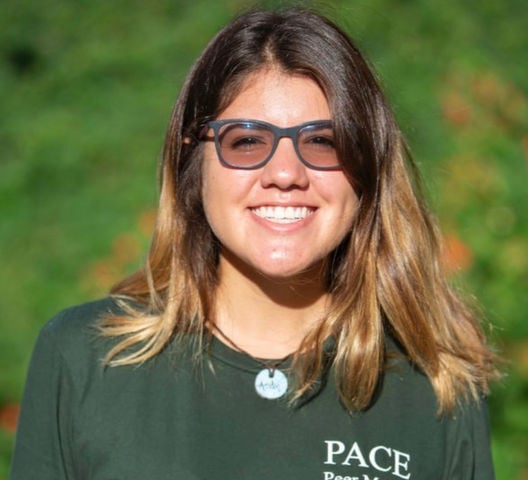 Andy Fernandez smiles for a picture outside while wearing a dark green PACE peer mentor shirt. Fernandez is a bilingual education senior and dreams of teaching abroad after graduation. 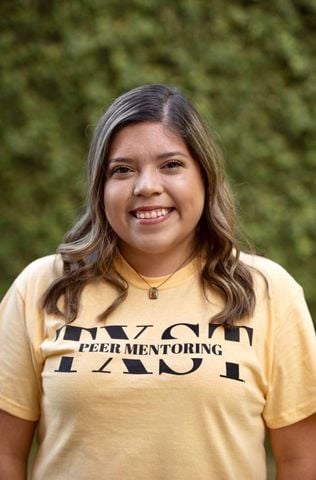 Brenda Manzano smiles for a headshot photo as the lead peer mentor at PACE. Manzano is a first-generation political science senior at Texas State and is preparing for the possibility of pursuing a master's degree. 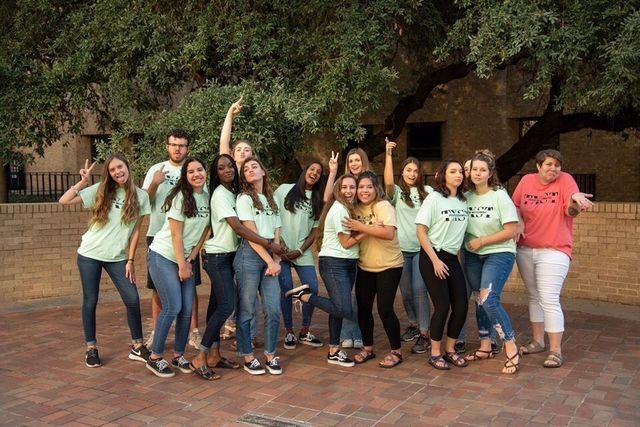 Surrounded by a team of mentors she supervises as a lead, Brenda Manzano stands out in the middle of the group wearing a yellow t-shirt during a group photo with the PACE Peer Mentors. 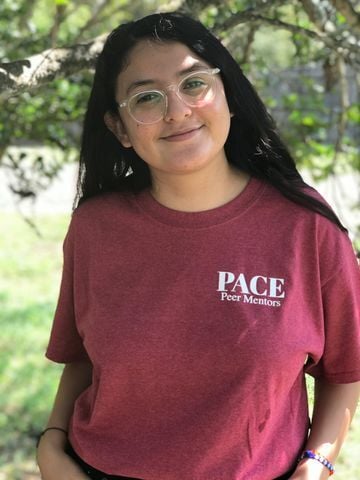 Elena Aguayo smiles for a photo in a PACE peer mentor shirt. Aguayo is a first-generation social work sophmore at Texas State and a PACE peer mentor. She says her role as a peer mentor has been amazing since she is able to connect with students on a personal level.

Growing up, Brenda Manzano was told she was better off staying home and helping her family rather than pursuing a college career. These words, however, never took power over Manzano, a first-generation political science senior. She was raised to never let anything, even hurtful sentiments like those, get in her way.

“We didn’t grow up very rich, but it never affected who we were; I don’t see it as a bad thing; I have very happy memories,” Manzano said. “Never complaining, never seeing it as a burden and just seeing it as another way to work harder”.

All of the hard work and perseverance paid off the day Manzano received her acceptance letter from Texas State. That day, Manzano’s father, who she describes as a “macho man” came into the kitchen after working outside with tears in his eyes once he saw his daughter’s acceptance letter.

When her family first visited Texas State, Manzano says her parents' eyes gleamed with both wonder and excitement for her future. However, Manzano confesses she came to Texas State uncertain if she was even going to make it to graduation.

Now, Manzano is a senior preparing for the possibility of pursuing a master's degree and the lead peer mentor at the Personalized Academic and Career Exploration (PACE) Center, which she describes as fulfilling.

“I feel that all of these things, like being Hispanic, first-gen and being a woman have been parts of me that bring strength and have molded me to be hardworking and dedicated,” Manzano said.

As a peer mentor, Manzano says she has witnessed amazing transitions from fellow students who have taught her to never back down from a challenge. They have allowed her to realize it is always okay to ask for help.

“I really love seeing the light in [students’] eyes, knowing that they are capable,” Manzano said.

It is these parts of herself that she hopes will be an inspiration to other students like her.

Fellow PACE student mentor Andy Fernandez, a bilingual education senior, moved to the U.S. from Monterrey, Mexico, when she was only 8 years old. Fernandez grew up attending a predominantly white elementary school where her English skills were misjudged by other kids.

This experience pushed Fernandez to find her passion in teaching bilingual education.

“With bilingual education, that kind of already brings my heritage with it as well. I don’t know who I am if I'm not working with kids," Fernandez said.

Fernandez joined the Bilingual Education Student Organization (BESO) where she became president of the organization her freshman year. She says that experience allowed her to grow through the responsibilities bestowed upon her.

Fernandez did not just stop there; she also became a curriculum and instruction ambassador for the College of Education. Upon earning the position, she stepped down as president of BESO and became a common member while also getting involved as a PACE mentor.

Fernandez explains being involved on campus has provided her with countless connections and recognition by various professors. Last spring, Fernandez became the president of the Curriculum and Instruction Ambassadors.

“That has been very rewarding for me,” Fernandez said. “With C&I Ambassadors, I have the liberty of reaching more people.”

With a possible master's degree in her future, Fernandez is currently excited to learn from real-life experiences. After college, her dream is to teach abroad; she has already been connected with contacts in the Peace Corps which she hopes will take her to places like Costa Rica and Madrid.

When motivation is low, Elena Aguayo, a social work sophomore, motivates herself to make her mother proud and uses her faith to get her through the difficult realities that come with being a first-generation student.

“This is all temporary because, in the bigger picture, I am going to live a more comfortable and happier life than I did as a child,” Aguayo said.

Motivated to attend Texas State for its diverse campus and her brother, Aguayo says it was refreshing to go to the PACE Center and see so many people of the same heritage as her in leadership positions. Eventually, Aguayo became a peer mentor herself.

Aguayo, who is pursuing a doctorate, aspires to be a person that students can look up to. She says her role as a mentor has been amazing because she is able to connect with students on a personal level.

“I never in a million years thought I would be on the mentoring side,” Aguayo said. “I feel like I was meant to be a PACE mentor because I connect with so many students and stories.”