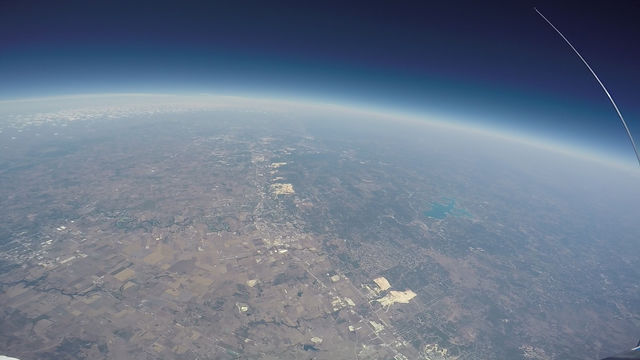 The view from the balloon at a high altitude with the outer layers of the Earth visible while the ground looks almost like a blur. 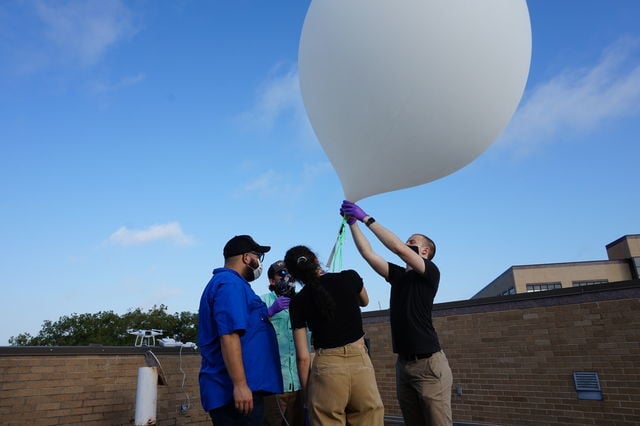 Four members from Society for Space Exploration (SSE) fill up a big white weather balloon on the roof of the Supple Science Building, Saturday, Aug. 29, 2020, at Texas State University. This experiment was known as Icarus-1 and was the first step in SSE's mission of building a low earth-orbiting satellite. 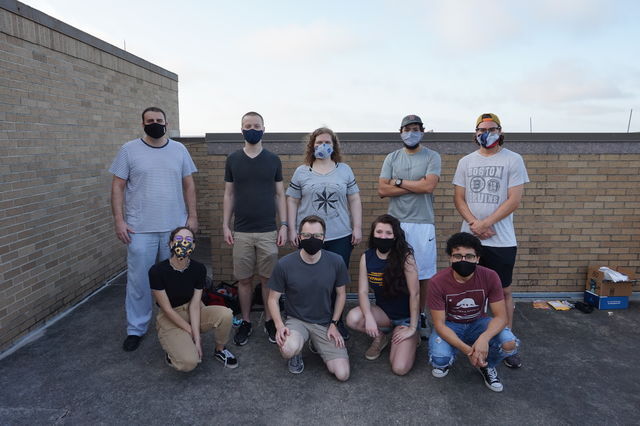 The launch team of Icarus-1 poses proudly while wearing face coverings on the roof of the Supple Science Building Saturday, Aug. 29, 2020, at Texas State University.

On the energetic morning of Aug. 29, a team of scientists stood on top of Texas State's Supple Science Building, ready to complete the first step toward building the university's first low earth-orbiting satellite. It was not the view Neil Armstrong and Buzz Aldrin experienced on the moon or that of astronauts on the International Space Station, but for the team, it was close enough.

The build-up to launching Icarus-1 felt like forever. The idea of the project stemmed from Evan Jellison, a physics senior and co-founder/co-president of SSE who, at the time, was looking for a way to gain research experience before applying to graduate school.

He went to one of his trusted professors, Dr. Blagoy Rangelov, a professor in the Department of Physics and the academic advisor for SSE, and asked him about any potential research projects. Rangelov revealed he wanted to build a satellite.

“Satellites are not easy to build, launch and operate,” Jellison said. “So we’ve kinda been involved in a series of projects leading up toward us launching our own satellite.”

Icarus-1 is the first of the series and named after the character in Greek mythology, Icarus, who flew so close to the sun that his wings, which were made out of feathers and wax, melted.

The mission involves the team using a weather balloon designed to pop under pressure and a small parachute to bring it down safely. The balloon also carries tracking devices, safety features, a GoPro camera, a styrofoam block containing a computer, sensors and a muon detector.

Jellison says the first goal of the project was to gain overall experience and work toward efficiency. The second was to use a muon detector to count the number of muons—which are similar to electrons but are about 207 times the mass—that passes through the detector itself as the balloon rises to see how good the atmosphere is at blocking them.

Before the mission could commence, the muon detector snapped, meaning no data was collected and a few tracking devices failed to work. However, the team carried on and counted these setbacks as learning tools.

“There’s always trial and error and things won’t go totally to schedule, but we still made it happen at the end of the day,” said Kelly Stephenson, an electrical engineering senior and fellow co-founder/co-president of SSE.

The balloon was expected to travel straight north but instead went west, covering a horizontal distance of about 20 miles over to New Braunfels. Jellison says the balloon was only expected to go about 70,000 feet up in the air, but to the team’s astonishment, was last recorded to have reached 88,000 feet.

During the mission, the balloon also hit an altitude so high the team was unable to receive data, leaving them in the dark for an hour filled with suspense and worry that all their hard work had been reduced to a plummeted balloon. Nevertheless, the signal came back and the balloon made its way back down to Earth.

The tracking team, tracking the balloon in a car, proceeded to trek through bushes and even barbed wire to track down the fallen balloon. Stephenson says she was left with scars from the journey that led them to find the balloon lying out of reach in a tree. Eventually, a neighbor lent them a ladder so the balloon could be retrieved, which concluded the start of the much larger mission.

Rangelov says he was proud to see his students execute such a cool project. He says he seeks to find a balance that allows students to take charge while also supporting them.

“It was amazing,” Rangelov said. “Especially during the launch, you can see how everyone was excited, but even before that when we started planning the mission you can see all the engaging discussions.”

SSE is a relatively new organization and was an idea created around the same time as Icarus-1. Both Jellison and Stephenson were eager to have leadership and create hands-on projects.

“We are not like a usual or normal organization; we are way more hands-on,” Stephenson said.

SSE is open to students of all majors and grade levels, as well as graduate students. Jellison says everyone can do physics and that anyone interested in space is more than welcome to join the team.

“I don’t think that your major defines what you know and what you can know," Jellison said. "I wouldn’t want to miss out on anyone joining our organization."

SSE plans on launching another balloon next semester and hopes to then begin building a ground control antenna.

For more information about SSE visit its Facebook or email sse.txst@gmail.com.