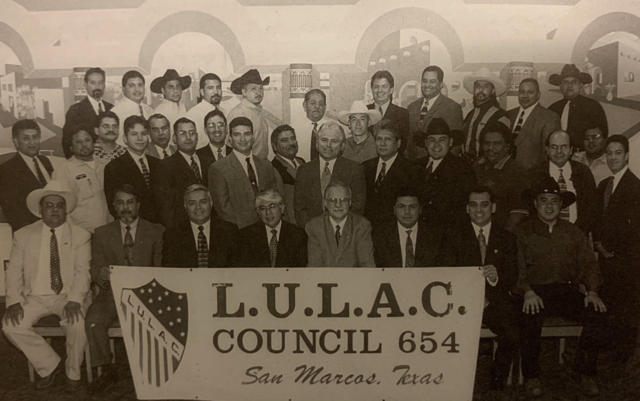 A photo from the book 'Sueños y Recuerdos del Pasado' of the 1972 LULAC Council #654 which was established by Frank Arredondo in San Marcos. 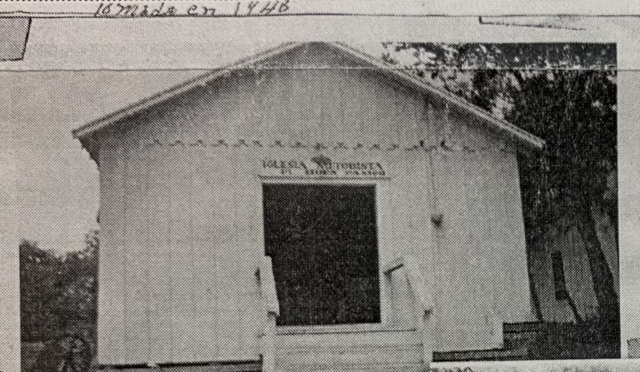 The original El Buen Pastor United Methodist Church on Fredericksburg Street. El Buen Pastor is the oldest Hispanic church in San Marcos and was established in 1870 by Spanish-speaking lay leaders. 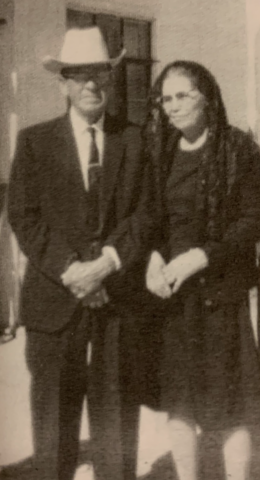 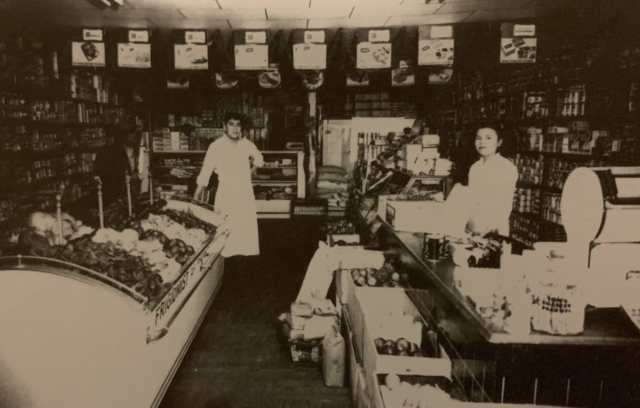 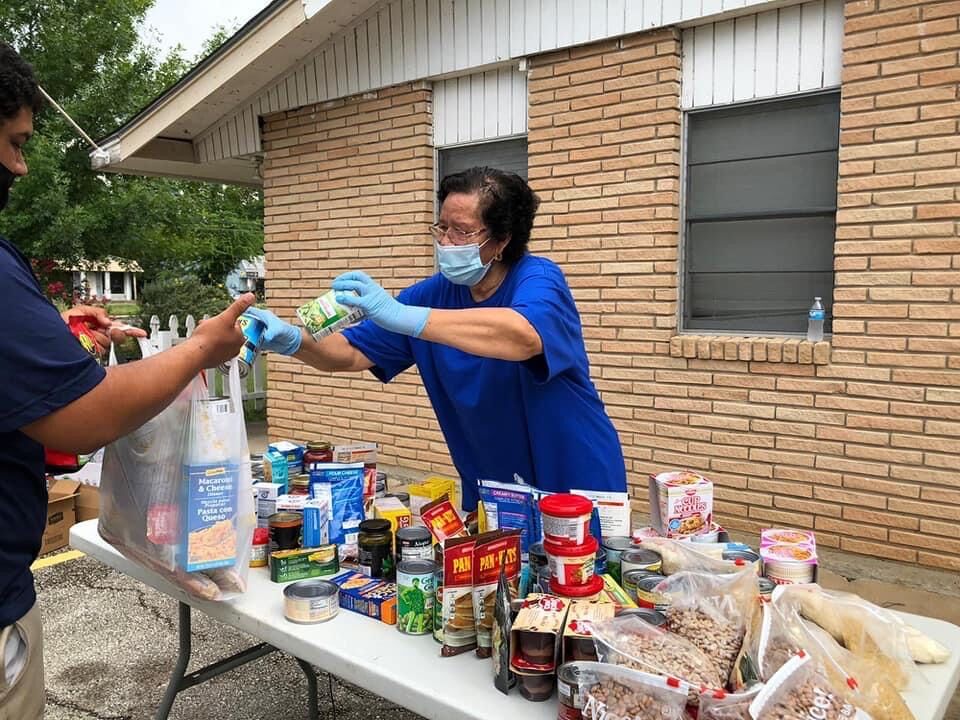 Before the Square, river tubing or Texas State, San Marcos was a magnet for Spanish explorers who traveled through the Camino Real searching for a place to settle. Explorers became attracted to the fertile land, along with the abundant wildlife, unique scenery and never-ending supply of cool, clear water.

The book states it was in the early 20th century when Mexicans migrated to San Marcos in hopes of building a new life for themselves and their families.

Southwest Texas State alumnus and Marine veteran Frank Arredondo says his grandfather, Juan Arredondo, came to Texas to avoid getting drafted into Pancho Villa’s army in Mexico. He walked from Reynosa and worked odd jobs until he made his way north to Kyle and eventually settled in San Marcos to become an entrepreneur.

“I remember growing up there and seeing my grandfather working a lot,” Arredondo said. “My dad, he ran the grocery store for my grandfather.”

Arredondo was born and raised in San Marcos and remembers feeling a divide between Anglo-Americans and Mexican-Americans when he was in school.

“We were separate,” Arredondo said. “We were not on a level playing field with the Anglos, especially with law enforcement.”

“[Selena] even brought her horse, and she was riding around,” Arredondo said. “We had people coming in for the dances, cook-offs, and a little miss contest and big miss contest for college girls. We had Folklorico dancing and all kinds of talent to raise awareness and money. It was a hit and pretty soon surrounding communities started creating their own, but none of them, in our estimation, were able to equal what we had done.”

That same year, Arredondo worked for Governor Dolph Briscoe in the Department of Housing and Urban Development. He later ran for City Council to be a voice for Hispanics and was the second Hispanic mayor to serve the City of San Marcos, from 1977-1978.

“I had a bully pulpit,” Arredondo said. “I was not intimidated. A lot of our people, because of our custom, are reluctant to speak out and have a: ‘es lo que es’ (it is what it is) type of attitude, but it doesn’t have to be that way, just put a little wind behind your sail, and you’ll start sailing.”

Arredondo also believes women are the future and that representation, like the city experienced when he was mayor, is essential to build role models for future generations.

“For far too long, women have been pushed aside, and it was worse before I started here,” Arredondo said. “The reason is I want my daughter, I want my grand-daughters to feel they’re just as good as a man in doing whatever they want to do, so I have no problems with having a good woman taking any kind of position either in business or in politics because those are our role models.”

Like Arredondo, associate professor of anthropology Ana Juárez sees anti-Mexican racism everywhere in San Marcos, even against her family.

“My grandmother on my dad’s side remembers stopping [at a restaurant] in San Marcos and being told that they had to go to the back door, that they did not serve Mexicans,” Juárez said.

Juárez was also involved firsthand with a restoration project in 2003 after an act of vandalism took place in several local Mexican-American cemeteries.

“They actually were able to get their cars in the cemetery and use their cars to mow down headstones,” Juárez said. “It was bad. There was a great deal of controversy.”

Juárez sees a complete erasure of Mexican contributions to local history. In 1996, she became the first person to teach a course on Mexican-American studies at Texas State and is still teaching that course to this day.

Every semester, she is struck by how whitewashed the history is that her students come in with. She often takes her students for walks throughout the city’s historic Mexican-American areas, and they are always surprised to find there are entire communities in their own backyards they were completely unaware of.

“It would be fabulous if we didn’t have to have a Hispanic Heritage Month and students would actually be learning about Hispanic history and heritage,” Juárez said. “My students tell me all the time, ‘I never knew any of this stuff. No one ever taught me’”.

"I would say to the parents, please tell your kids why you came here, because they don't know all of the sacrifices that you all had to go through in order for your kids to have a better life," Baltazar-Ramirez said.

El Buen Pastor is San Marcos’ oldest Hispanic church. According to Baltazar-Ramirez, the church was established in 1870 by Spanish-speaking lay leaders who held services on the shore of the San Marcos River, especially during harvest time.

"I know that in harvest time is when more people gathered and then began to gather there precisely on the bank of the river. They then made a building in Fredericksburg and then changed it here," Baltazar-Ramirez said.

In 1902, the church was converted to a 'Mexican school' which was the first school for Mexican-American children to attend in San Marcos.

Baltazar-Ramirez says one difficulty children experienced was poverty. She says few Hispanics attained the same economic level as the Anglo-Americans specifically because of the lack of education.

In fact, according to 'Sueños y Recuerdos del Pasado', the school did not have running water like the "white school," and in 1919, the principal required students to speak English in and out of the classroom at all times.

Baltazar-Ramirez says education helped her get to where she is today. She says education is the pathway for progress and that discipline is a basic function for that pathway as well.

She recalls the words of former Texas Secretary of State Condoleezza Rice who was told throughout her upbringing, as a minority, she had to be ”twice as good," which Baltazar-Ramirez says is so true.

Baltazar-Ramirez began preaching at El Buen Pastor United Methodist Church eight years ago, but her spiritual journey began in Alabama after she and her family moved there from Guanajuato, Mexico.

Ever since her arrival, she has restored and began numerous ministries to assist the San Marcos community, such as providing groceries to Texas State students and the elderly on a weekly basis, taking members of the community to their medical appointments and even treating Texas State students to a hot meal in an effort to provide support when they are away from their families.

Retired elementary school teacher and El Buen Pastor Methodist Church historian Rosa V. Aldape was invited to a lunch at the church during her first year at Southwest Texas State in 1970.

"They would go to the university to get the young people that were Methodist to come to church," Aldape said. "So my husband and I started to come here, and they would invite us to lunch after the service and then they would drive us back to the college, so that's how I landed here."

Aldape became interested in San Marcos after her son wrote a paper on the history of the city, and ever since, she has been collecting historical information, especially on the church.

"I remember writing a paper about San Marcos, so I got to learn a lot about the history and from then on I continued to add to my collection," Aldape said.

According to Aldape, the founders of El Buen Pastor worked on farms and would worship at the river to unwind after a long month of work.

"A lot of the people were farmers and crop workers so they would unite once a month, and they would come equipped to stay a day or two, then they would worship, eat, play, enjoy and socialize by the river," Aldape said.

After the church was built on Fredericksburg Street and the wear and tear of the building worsened, the First Methodist Church helped rebuild El Buen Pastor.

"We used to have a little church bell, but it got to a point that the place was getting so rotten, the wood and all that, that the bell was in danger of collapsing," Aldape said. "So the Anglo church helped build a new church for us to save that bell and the building."

Like the original settlers of San Marcos, Aldape also grew up as a migrant worker and says the words of her mother are what made her realize the importance of getting an education and breaking the cycle.

"We used to go up north and pick; we picked cherries, tomatoes, strawberries, garlic, onions, we even picked rocks," Aldape said. "We worked because my mother was a single parent and she raised us, so for her that was the only thing she knew how to do, and as we were working she would say: 'If you don't want to work like a burro, which is a donkey, you're going to have to go to school and get an education'. And that was when I decided I was going to go to college because for me that was the way to break away."

Aldape hopes people will continue to preserve Hispanic history in San Marcos so they, too, can become grounded in their roots.

"[History] helps us understand other people and provides a sense of identity and change," Aldape said. "Preserving our Hispanic heritage is a vital link to our cultural and educational well being. It [connects] us to specific times, places and events that were significant milestones in our cultural past."

Anyone who has ever found themselves forced to wear shoes without socks for even an hour understands how essential those small pieces of fabric can be; the comfort they provide can truly make or break a day. This holiday season the staff at the LBJ Student Center are on a mission to make sur…

Texas State women’s basketball is set to take on the University of New Orleans on Nov. 28 in New Orleans, Louisiana to kick off the 2020-21 season.

Men's basketball eases past Crusaders in first game of season

Texas State men's basketball cruised to a comfortable 98-59 home win in its opening game of the 2020-21 season against the University of Mary Hardin-Baylor on Nov. 25.