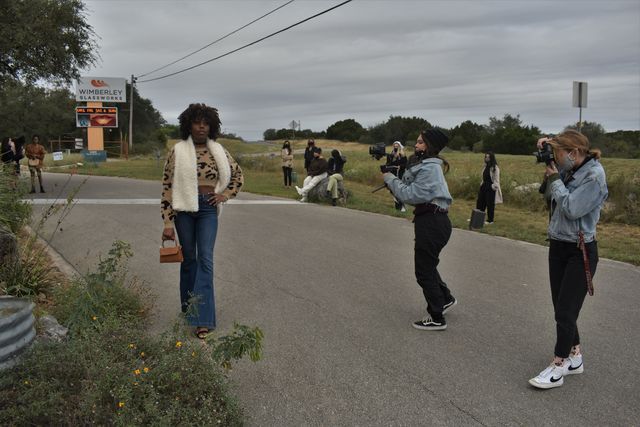 FMA model Brittyne LaMothe walks down the street as videographer Melina Madrigal (left) and photographer Hanna Hurd (right) film and photograph her outfit while stylists observe behind the camera in Wimberly, Texas. 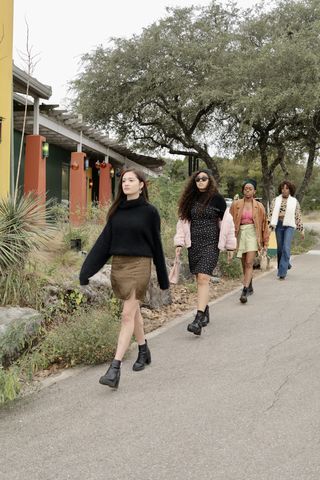 FMA models (from front to back) Cristina Rivera, Hannah Rose Jones, Schuyler Hayes and Brittyne LaMothe walk past Wimberley Glassworks while dressed in clothing from Pitaya outdoors in Wimberly, Texas. 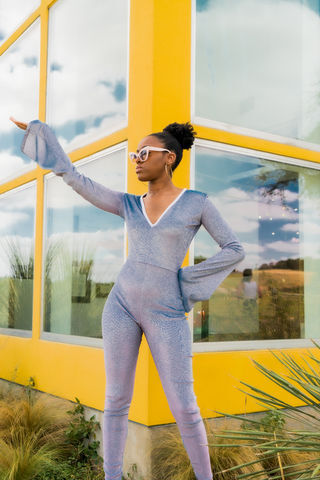 Schuyler Hayes strikes a pose while dressed in a jumpsuit by designer and co-coordinator for FMA Markila Caldwell outside Wimberley Glass Works in Wimberly, Texas.

The show was recorded in Wimberley, where models walked in different backgrounds around the Wimberley Glassworks building. Each series of videos showcased a variety of work from student designers as well as clothing from local San Marcos boutiques and shops.

FMA President Tiara Benedetto, a fashion merchandising senior, says she and her team of officers came up with the idea of a virtual show out of precaution for COVID-19.

“Our fashion show, it’s our biggest event of the year,” Benedetto said. “We have one every semester, so this year we had to take a lot of precautions like social distancing while figuring out how we wanted our show to work and how to keep everyone safe.”

Along with her role as president, Benedetto also participated in the virtual show as a model. She says she is constantly having to exhibit patience and accept the things she cannot change.

“We’re all going through it, so you just have to make the best of the situation and understand that nothing is going to be exactly the same with a global pandemic,” Benedetto said. “I’ve seen such an improvement in my team by delegating and being able to be a leader rather than an overachiever.”

Despite COVID-19, Benedetto says she is thankful for the hardworking people on her team who helped make the virtual show possible and a success.

“Everything was really well put together. Honestly, I was not expecting that, but having coordinators, two of them when we usually only have one, they were really self-sufficient,” Benedetto said.

Markila Caldwell, an accounting senior, and Elissa Bouska, a French junior, are the co-coordinators for FMA and have worked on planning the ins and outs of the virtual show since summer. They both worked to figure out locations, stylists, videographers and models to make the show come to life on screen.

“In the beginning, we were trying to find locations for the show, but we kind of knew that traditional venues wouldn’t really allow an audience,” Caldwell said. “The audience is where we get most of our exposure; that’s how we get most of our profit from the fashion show, so having to go online and making it publicly available stopped a little bit of money flow, but everything turned out good in the end.”

Caldwell and Bouska say being a part of the first virtual FMA fashion show was monumental, and they hope their work will inspire future members or officers to leave their mark on FMA.

“We’re kind of setting a precedent for FMA when it comes to that whole virtual fashion show thing,” Bouska said. “I know a lot of big brands have had to go through this similarly, like being the first one like Balmain to do virtual shows, completely virtual like no audience or anything; it’s a big piece of the puzzle to figure out, but we managed to figure it out, and I like to think that we’re setting an example or maybe even leaving a legacy for coordinators after us.”

Being a part of FMA’s in-person show last fall helped Bouska and Caldwell with their planning efforts.

“Last fall, I was a model and Kila was a designer; she actually designed for me, so we both brought that to the table and that was really beneficial because I kind of knew what the models, especially returning models, what they were expecting," Bouska said.

Schuyler Hayes, a fashion merchandising junior, was selected to be a model for FMA's Spring Show last semester but was unable to walk due to the cancellation of the event.

Hayes says this year's virtual show helped ease her nerves about performing in front of others.

“It was a lot of fun, especially without having to be in front of a physical audience, it made it easier too,” Hayes said.

In preparation for the virtual show, Hayes says she and other models had practices once a week where they learned how to walk in heels, showcase their inner confidence and strike a pose.

One of her favorite parts about being a member of FMA is getting to network with industry professionals while meeting new people who share the same passion for fashion as she does.

“People in FMA are also connected with this foundation called NRF, the National Retail Federation, which connects people with a bunch of executives and companies that talk to students, so it’s a really good networking opportunity,” Hayes said. “And just getting to know people in your major is really important considering we’re all taking the same classes together and like down the line we’re all probably going to be working in the same industry, so it’s good to at least know your classmates.”

She also says FMA has helped her build confidence as a model and advises anyone interested in fashion to join and "try something new".

FMA will continue to monitor the number of COVID-19 cases in Hays County before determining whether they will have an in-person spring show. For now, the organization hopes more students will join the organization and support the next generation of fashionistas at Texas State.

Clips from the virtual show can be found on FMA's Instagram page. To learn more about FMA or ask questions about joining the organization, contact Tiara Benedetto at tlb239@txstate.edu or follow the organization on Instagram.

Correction: An earlier version of this story misspelled the name of Elissa Bouska. We apologize for this error and have since corrected it.

COVID-19 currently acts as an incubator for mental health struggles due to its stressful and unpredictable nature. Students especially find this stress can be heightened with college posing challenging components that make their days more difficult.

Hays County Judge Ruben Becerra’s office is in the early stages of a project which, if it comes to fruition, will construct a mental health care facility serving all of Hays County.

After the winter break concluded, Texas State students and faculty returned on Jan. 19 for the start of the spring semester.