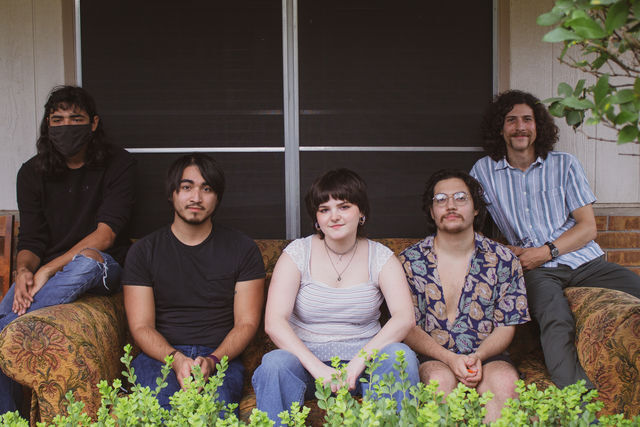 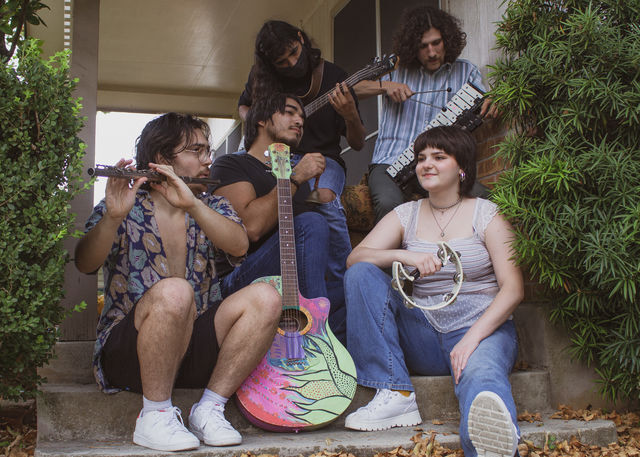 Local band Wezmer poses on the front porch of one of the band members' home, Friday, Oct. 23, 2020, in San Marcos. 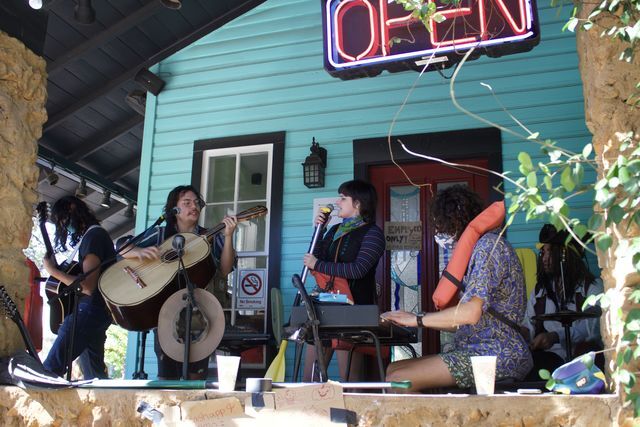 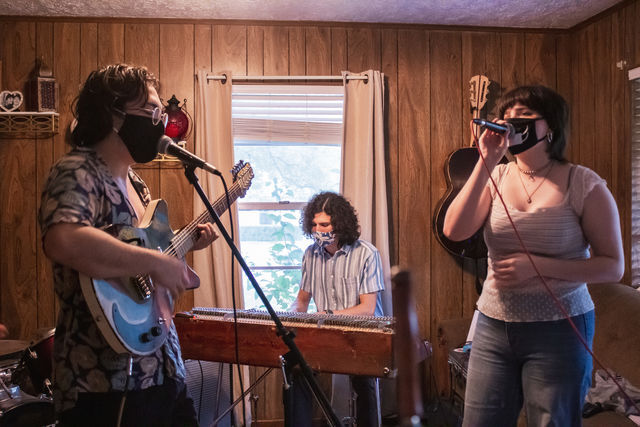 Members of Wezmer rehearse their songs inside of one of the band members' homes, Friday, Oct. 23, 2020, in San Marcos.

It was a cold February night earlier this year when local psychedelic indie band Wezmer celebrated like it was the end of the world.

Little did they know its third annual event, Blueberry Nights, would be its last chance to come together as a community for quite some time. In the band's retelling of the evening, the event takes on the “rose-colored glasses” quality that saturates all pre-pandemic memories.

Against a backdrop of tinsel streamers and a rainbow of flashing light, a crowd of art lovers packed into a living room in the historic district and watched performances from poets, acoustic acts, full bands, drag queens, dancers and theater troupes.

The band describes Blueberry Nights as a “smorgasbord of different mediums”; Perez feels the most recent event was its best yet.

Part of the success of these events comes from the fact that Wezmer has established its gatherings as places with a zero-tolerance policy for toxicity of any kind. This is something the band's collaborator and local pop singer Michael Imo (who performs under the moniker Maikéru) deeply admires about it.

“One of the things I really appreciate about Wezmer is that they make it a big deal that every show or every space they are in is a safe space for everybody,” Imo said. “It’s something that I really value. Nothing beats going to a place with your friends or even by yourself and just listening to music and building friendships.”

Blueberry Nights are just one iteration of the band’s constant efforts to bring people together. For the past couple of years, it has also hosted a Halloween block party named after whichever house band members lived in at the time—Nightmare on Younger Street, Nightmare at the House with the Big Windows and so on.

Hundreds of people show up in costumes to dance to live music, watch horror films on a projector in the backyard and generally get spooky. Although the COVID-19 pandemic makes this year’s nightmare party virtually impossible, the group expects it to return next year.

On one level, these events are put on in the name of good times and good tunes. But on a deeper level, they are part of Wezmer’s ambitions to cultivate a sense of community.

“We’re all about community and how there’s power in community and power in love, and in all looking out for each other,” said Rachel Ditzig, Wezmer's vocalist and community relations manager.

Community, along with creation and collaboration, make up the group’s “three c’s” and are the band's guiding principles in all that it does.

“There’s more than enough space for everyone to succeed,” said Christina Castro, Wezmer's marketing director and social media coordinator. “It’s not about competition. Sometimes it’s about being able to hold space for individuals to showcase their talents. The people around you are probably so talented; it’s just giving them that space, time [and] opportunity.”

It’s not surprising that community is so important to the band considering that seeking community was what brought its members together in the first place. Perez says he was a different person before Wezmer.

“I was really hungry for music and starving for community and [had] ideas of bringing the community together through art and collaboration and having really good relationships with your neighbors,” Perez said.

He started jamming with the original members of Wezmer, most of whom have since moved on from San Marcos, except for the band’s current bassist, Alejandro Peña. Since that time, the group has evolved into what they call “Wezmer 2.0” and has expanded into artists’ collective.

As creatives in a small town, the members naturally gravitated toward each other through mutual friends, classes, performances and even a brief time when Ditzig and Perez both worked at Commons Dining Hall. Castro describes the way everyone came together as “divine timing”.

The band is always seeking to add more creatives to its artists’ hub and collaborate in any form. Recent collaborations include an album with Maikéru and other musicians (the proceeds of which will be going to the Hays County Food Bank) and a backdrop by artist Madison Nelson featured in one of the band's fundraising live streams.

“Collaboration left and right, that’s what we aim for,” Castro said. “Anybody and everybody. Whoever has an idea, bring it to the table. We’re here to hear it. Let’s make it happen. We pride ourselves on not just saying ideas but actually acting on them.”

“DM us, message us, email us,” Castro said. “We will find you those resources [and] those people. That’s what we’re trying to do—create a bigger network where we all help out one another.”

For more information on Wezmer, follow the band on social media. The band's music can be streamed on Bandcamp.