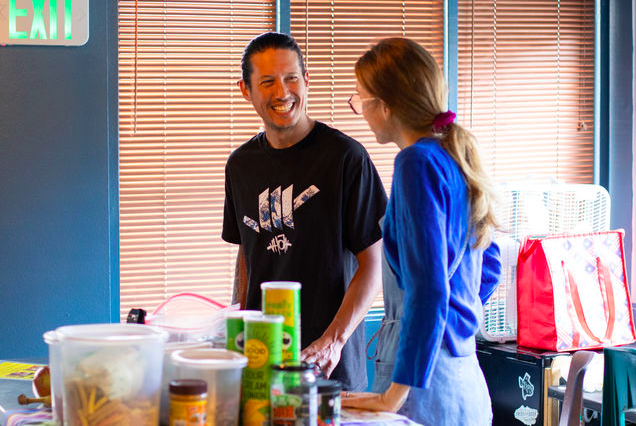 Eye Like You co-owners Keoki Anderson (left) and Whitney Anderson talk with each other, Monday, August 30, 2021, at Red Bus Food Park. 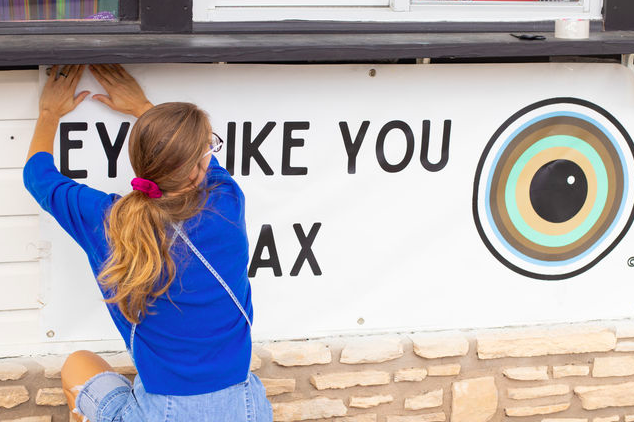 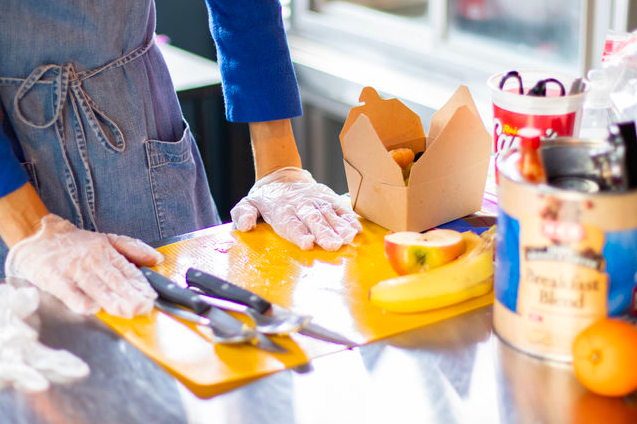 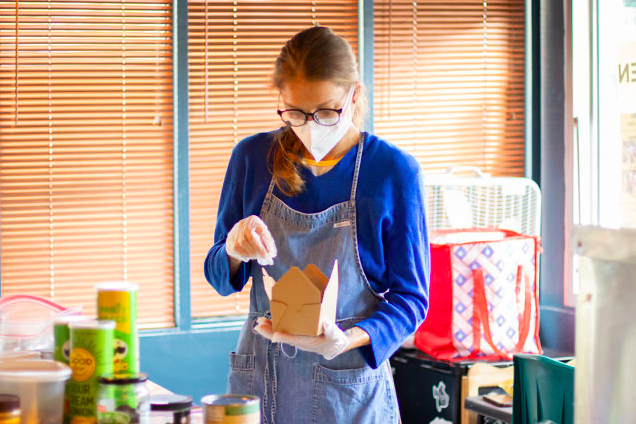 A kitchen full of fresh ingredients and a drive to transform the fast-food industry is all Whitney Blandford and Keoki Anderson need to serve their community.

As owners of the local snack kitchen Eye Like You, the duo is on a mission to bring their vision of starting a "fast fuel food evolution" to life, one nutritious snack box at a time.

The concept of fast fuel food comes from wanting to promote healthy eating while maintaining the convenience and affordability that comes from consuming fast food. Eye Like You achieves this with its variety of $10 snack boxes that include nutritious foods such as fruits, vegetables, meats, nuts and crackers.

"I saw a charcuterie [board] once. And I was like, 'hey, that's really healthy.' 'hey, it can't cost that much.' And so, the $10 snack box was born," Blandford says. "I thought $10 is affordable, and it's nutrient food. It's a lot better than a hamburger combo meal at any fast food you can find. So, we just wanted to definitely stick to a social enterprise."

In August 2020, at the height of the COVID-19 pandemic, Blandford, a public administration alumna, saw that the future of restaurants was uncertain. As a result, Eye Like You started as a food bike that she rode around San Marcos selling healthy sandwiches and vegan snacks.

While out of the U.S., Blandford worked in the nonprofit sector for seven years on environmentalism and social service missions. Now, she uses her experience to market Eye Like You as a nontypical fast-food establishment. Anderson, a University of Guam Culinary School alumnus, uses his expertise to manage the business' food costs, prices and profits.

Although they collaborate on figuring out what goes into the snack boxes, Blandford says Anderson is much more of a "foodie" than herself. In fact, many of the in-house snacks they provide come from his ingenuity.

"I walked into a restaurant one day and I've been hooked. And I've been in restaurants since '07. And that's what I do. That's what I love," Anderson says. "I like to experiment with kitchen stuff and recipes. And we like being out and involved with the community just bringing people together and being involved in things like that. Food brings people together just as much as the arts."

Located inside the Red Bus Food Park's indoor food court on the corner of Chestnut Street, Eye Like You's menu offers gluten-free, vegan, keto and traditional options. A snack box containing foods sourced from local farmers and businesses is in the works.

Anderson says supporting small businesses and staying connected with other local entrepreneurs has been an important part of growing and developing Eye Like You.

"Doing local — it creates community also as like a network of strong players that want to push the community forward," Anderson says. "It's less intimidating when you can support local farmers and you can do something for them. They might know something that you can use that could be helpful for your business. And it's just like a nice little tight-knit community. And because we're all kind of in the same boat, trying to make [it in] a big corporate world, trying to stay local and small, it makes even more of a tight-knit community."

"Being healthy is really important for mental wellness, physical wellness, there's a lot of pieces," Martinez says. "When you talk 'fuel food' I love that because it really is about feeding your mind and soul and respecting those around you and supporting those around you. So, I think, I love, love their mission. I think it plays exactly into what we're most passionate about as an organization."

As the owner of a site with several other small businesses, she also admires Eye Like You's effort to give back to the community.

"The idea of giving back to the community that ultimately is supporting you, whether they're buying from you or they're providing you with produce for your meals, I mean, that is what it should be like, and I think what's amazing about that is San Marcos, and Texas I mean, there's just a very special hometown feel when we're here," Martinez says. "I just feel so lucky to be part of an organization where we do have people that believe in that and really act on it to give back. So, it's incredibly important and very admirable."

San Marcos was the ideal location for the snack kitchen, not only because it is the home of her alma mater, but because of the open-mindedness of the college community, Blandford says.

"We think [San Marcos] can really see what we're trying to do here," Blandford says. "But yeah, college kids — not only do they need something affordable, but they need something with sustenance. I just think college kids are just more intelligent than when I was [that] age. I just think y'all are just more aware of our issues and more aware of what's right and what's wrong. And I think that they'll see this, and they might want to be a part of it."

Blandford says she and Anderson are in no rush to grow their business any faster than they should. They're grateful to be starting small and hope to gradually achieve their goal of opening a cafeteria to serve home-cooked meals alongside their snack boxes.

For now, they celebrate the small victories that come with running their local snack kitchen.

"Just the small little wins that you can see yourself pushing forward, like I remember coming home and seeing the business cards, or I came home and saw the flyers and just those little things that validated and made me feel like, 'wow, we're really moving forward with this,'" Anderson says. "But I think the tangible, like, the authentic stuff, like when we sell a box and somebody tries it, and their feedback is so genuine, that's rewarding for me to see."

Eye Like You is open Mondays and Tuesdays from 11 a.m. to 2 p.m. For more information and to view the menu, visit its Facebook @eyelikeyouuu.