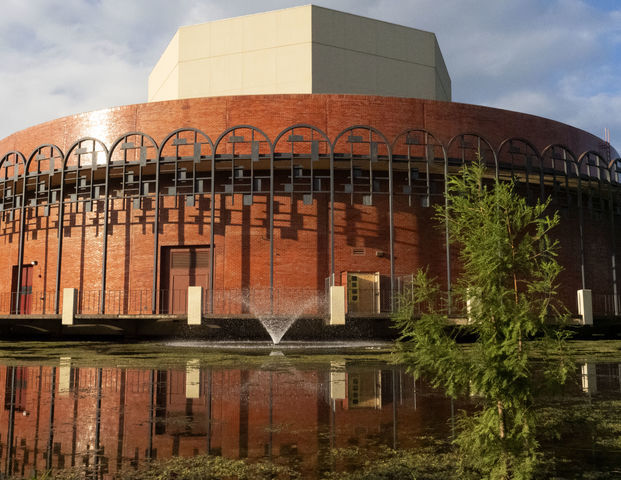 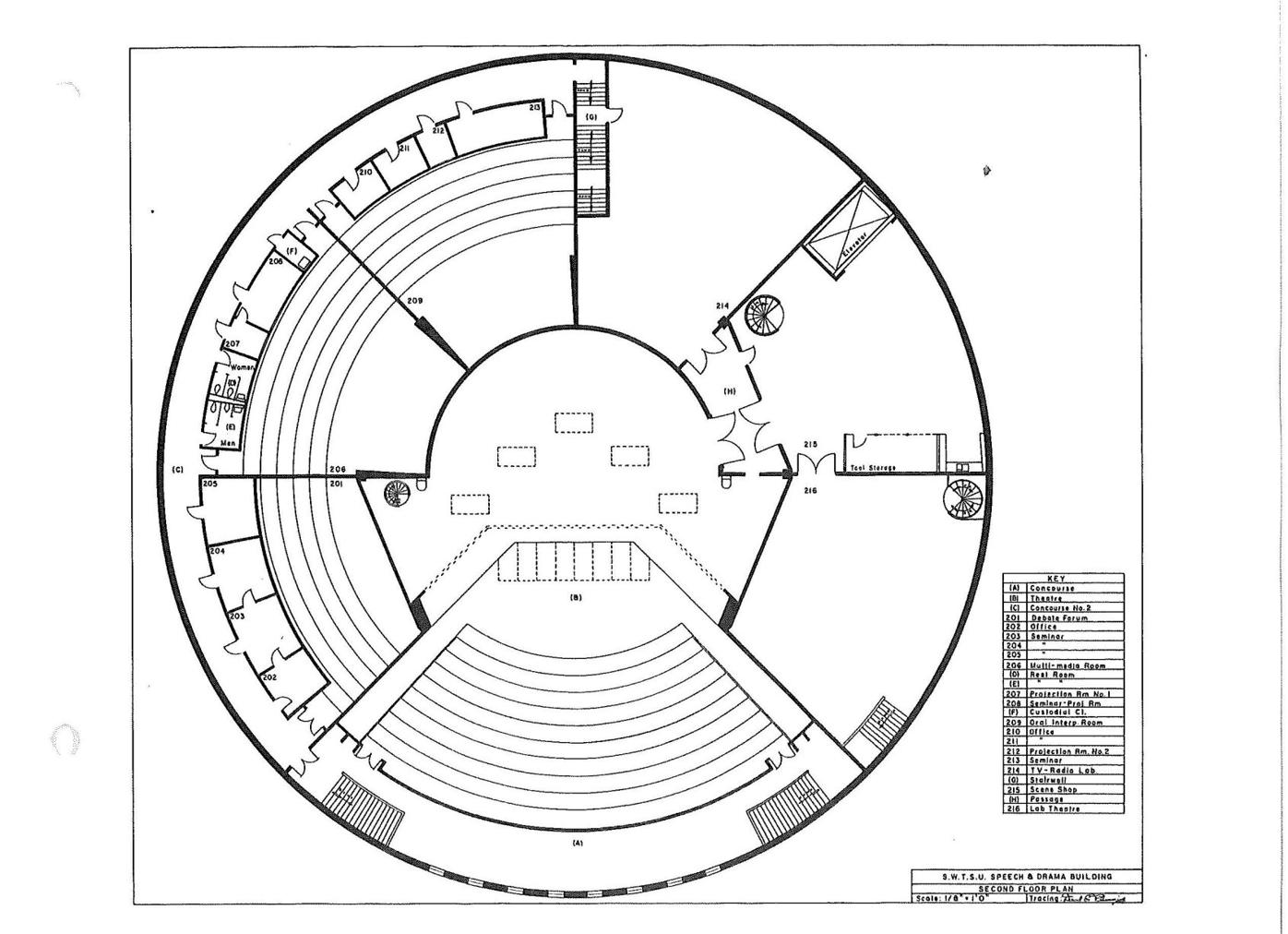 A second-floor drawing of the theater center's layout, originally published in President Billy Jones' Dedication of the new building on October 30, 1971, in San Marcos, TX.

Stumbling down the steep slope outside the Undergraduate Academic Center, stopping for a breath and soaking in the view, students and visitors are met with the round, red fortress surrounded by a wide moat — a castle-like home to the Department of Theatre and Dance.

Built in 1971, the Speech-Drama Center is located on the edge of campus, atop the remnants of a former federal fish hatchery. This hatchery led to the building's signature moat known for its wildlife and picturesque fountains.

"The Speech-Drama Center, you know, has always been a showplace because of its distinctive look, and the water. Everyone liked the water, everyone liked the moat," says Steven Beebe, a former professor and dean of the Department of Communication Studies. "It was just a very romantic, beautiful spot."

The fish hatchery was deeded to Texas State in 1965. It included 43 acres of land that provided the university with more acreage to build upon, and it gave architect Harvey P. Smith Jr. the golden opportunity to create something aesthetic and breathtaking.

Under his father's architectural firm, Harvey P. Smith and Associates, Smith Jr. came in with his design in the late 1960s, a time when the department needed a new space. Alumnus and former professor Tom Copeland was a student at the time and recalls his classes being in Old Main, a chapel turned auditorium, before they were moved to the Theatre Center.

"I was like, 'Oh my God. My high school theater, which was pretty crappy, was better than that,'" Copeland says. "But you know, [Old Main] was probably one of the most interesting places I've ever worked."

Copeland admired Old Main for the challenges it presented in creating theater, which forced him to adapt his style and choices to the unique and multi-purpose space. He says this reminded him of how he believes theater should be — adaptive and creative.

These creative challenges did not cease, however, when the department moved to its new building. In the Speech-Drama Center, Smith Jr.'s design, at times, proved difficult for the department. Copeland, for instance, found the building to have wasted space and unnecessary obstacles.

"There were many, many problems with that building, because instead of taking it from the perspective of what's good, you know, for theater, it was more about the way the building looked and all that stuff," Copeland says.

In particular, Copeland noticed the building's strange entrance — which is around the back of the circle. The scene shop for building sets is upstairs, causing a doubling effect — after unloading materials on floor one, they must be reloaded back up the elevator to reach the second floor.

Another main factor in its problematic design is the lack of windows. Until 1988, the departments of communications studies and theater shared space in the building, so when Beebe worked within its walls, he remembers wondering about the weather while hidden in his office inside.

"It is a beautiful and distinctive building on the outside, but, as you know from being in the building, there are no windows in the building, except in the offices that are now on the second floor," Beebe says.

This design is reflective of the so-called "modern" take used in Smith Jr.'s design of the building. In the '60s, this included experimentation in geometric design, leaving less room for design practicality. Other examples of the '60s modern style can be seen in the design of Evans Auditorium and the Continuing Education Center.

At this point, information regarding Smith Jr. is scant. After his work at Texas State, he worked at the University of Texas at San Antonio to draft an archeological survey of Friedrich Park. A death record was posted in February 2019 for a man residing in San Antonio under the name of Harvey P. Smith. If this man was Smith Jr., the architect responsible for the Theatre Center died in 1993 at 75 years old.

In his life and his time as a designer for Texas State, Smith Jr.’s building left an impression on many faculty and students. It has provided a space for classes, creation and relationship building, and, for many, it has been a place where people have spent entire days of their lives.

"[Being a drama teacher] is not like being a coach or something, your hours still go on when the class is over, and I'm sure that's true of all teachers, but it's even more here," Copeland says. "If you're directing a play, or you're technically doing something with it, or you're making a film or you're doing all these things, it's hours and hours and hours that go on long after classrooms."

Because of these hours of dedication, Texas State continues to build upon its theater department, as well. Since its origin, the building has undergone hundreds of renovations, funded by what College of Fine Arts and Communication Dean John Fleming sees as the school's recognition of the department's success.

"We feel very well supported in the arts. And, it's when I interview faculty, I can go through, 'Here's all the different things that the College of Fine Arts and Communication has received in recent years,' and buildings and renovations are a clear sign of investment and a clear sign that the fine arts have a priority," Fleming says.

With these years of funding, the department has finally started renovations to the mainstage, a former proscenium theater that has lived as a make-shift theater in the round for years. After this renovation, however, Fleming believes the building's growth may reach its peak.

"The tough part is, we pretty much finished renovating that building because there's just no more square footage to do it," Fleming says.

Instead, the department will continue to expand with Live Oak Hall, a new building for film majors opening for classes in fall 2022. But, even with this new building in sight, the Theatre Center will continue to house the numerous theater majors, faculty and former Bobcats, all of whom call the moated-building home.

"I still think that's one of the loveliest areas of campus with the beautiful cypress trees in the water," Beebe says. "Now that I'm retired, I often take walks every day, and I walk by the building often, and I find myself still taking pictures. Just last week, I took a picture of the building just because I think it's such a unique thing to build."