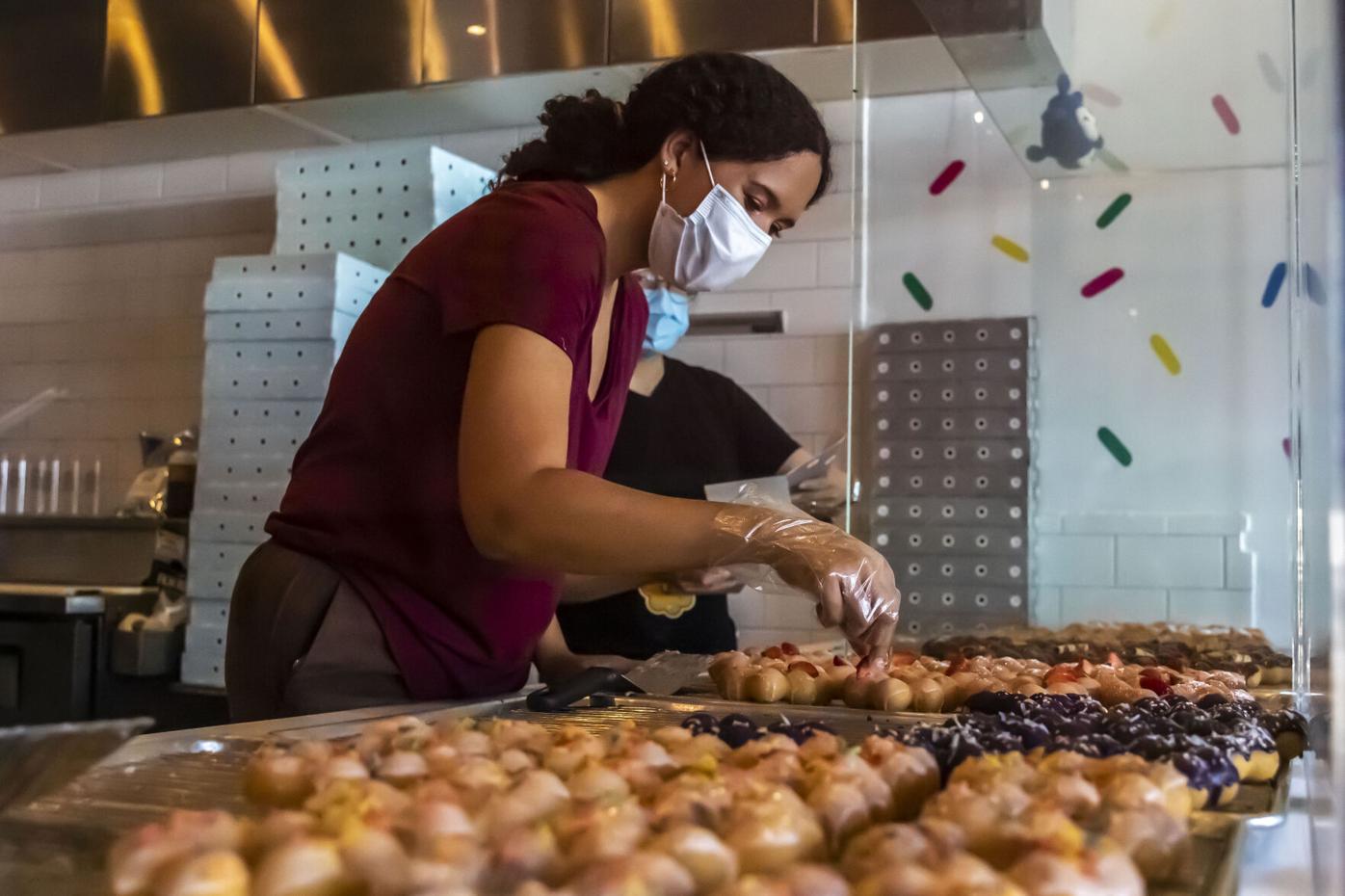 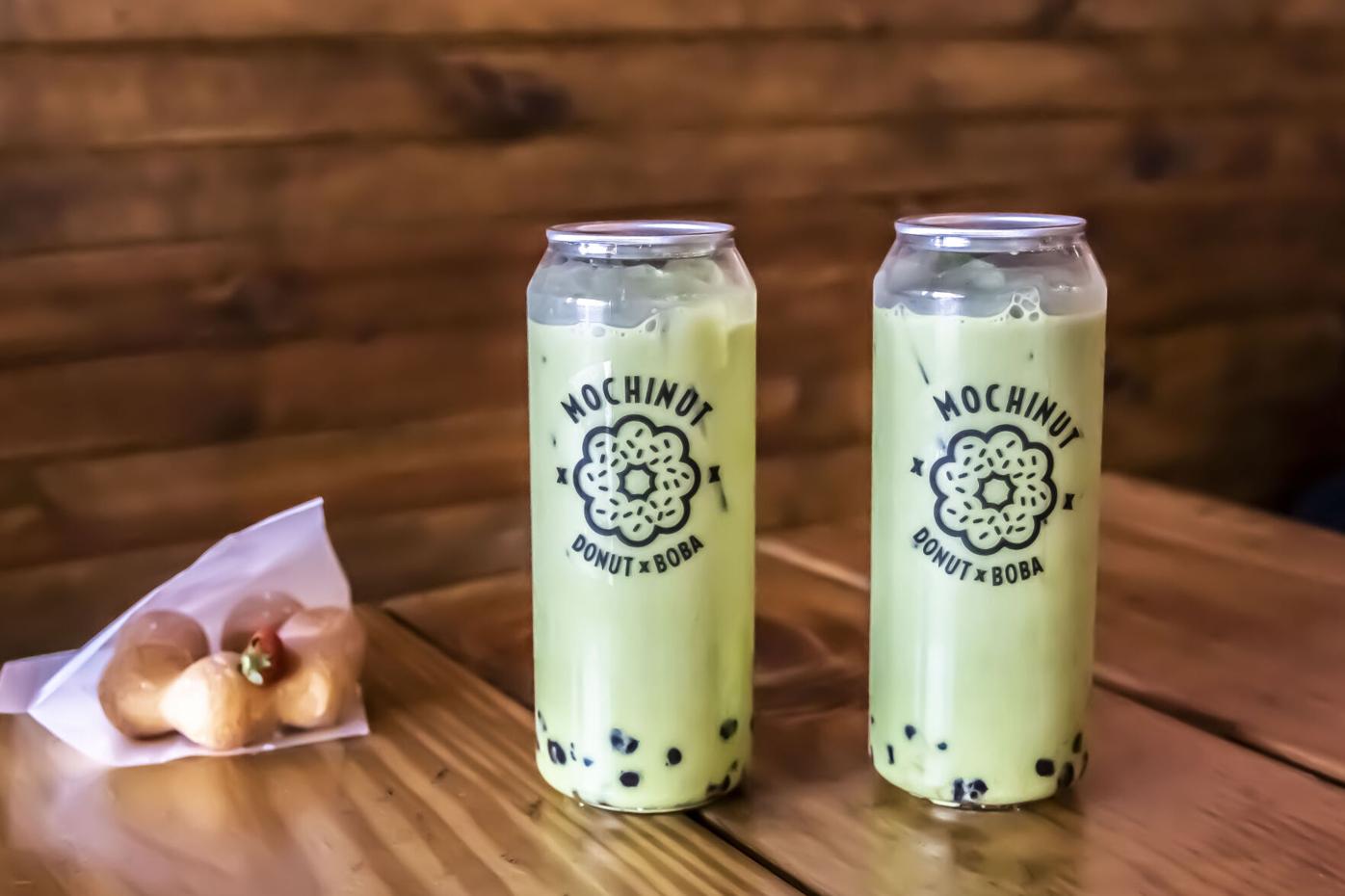 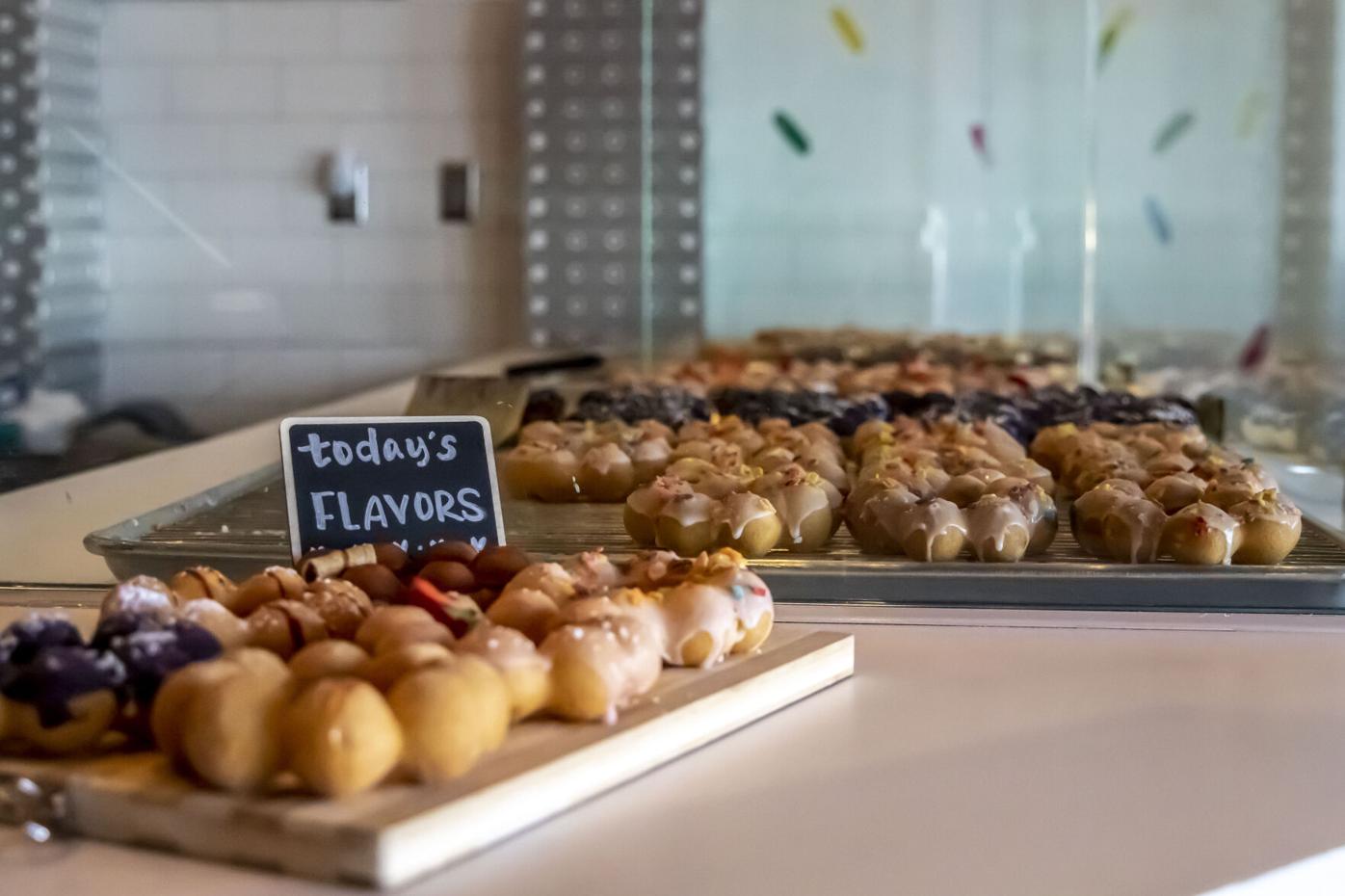 Mochinut sets out displays for the mochi donut flavors of the day, Thursday, Sept. 9, 2021, in San Marcos, Texas. 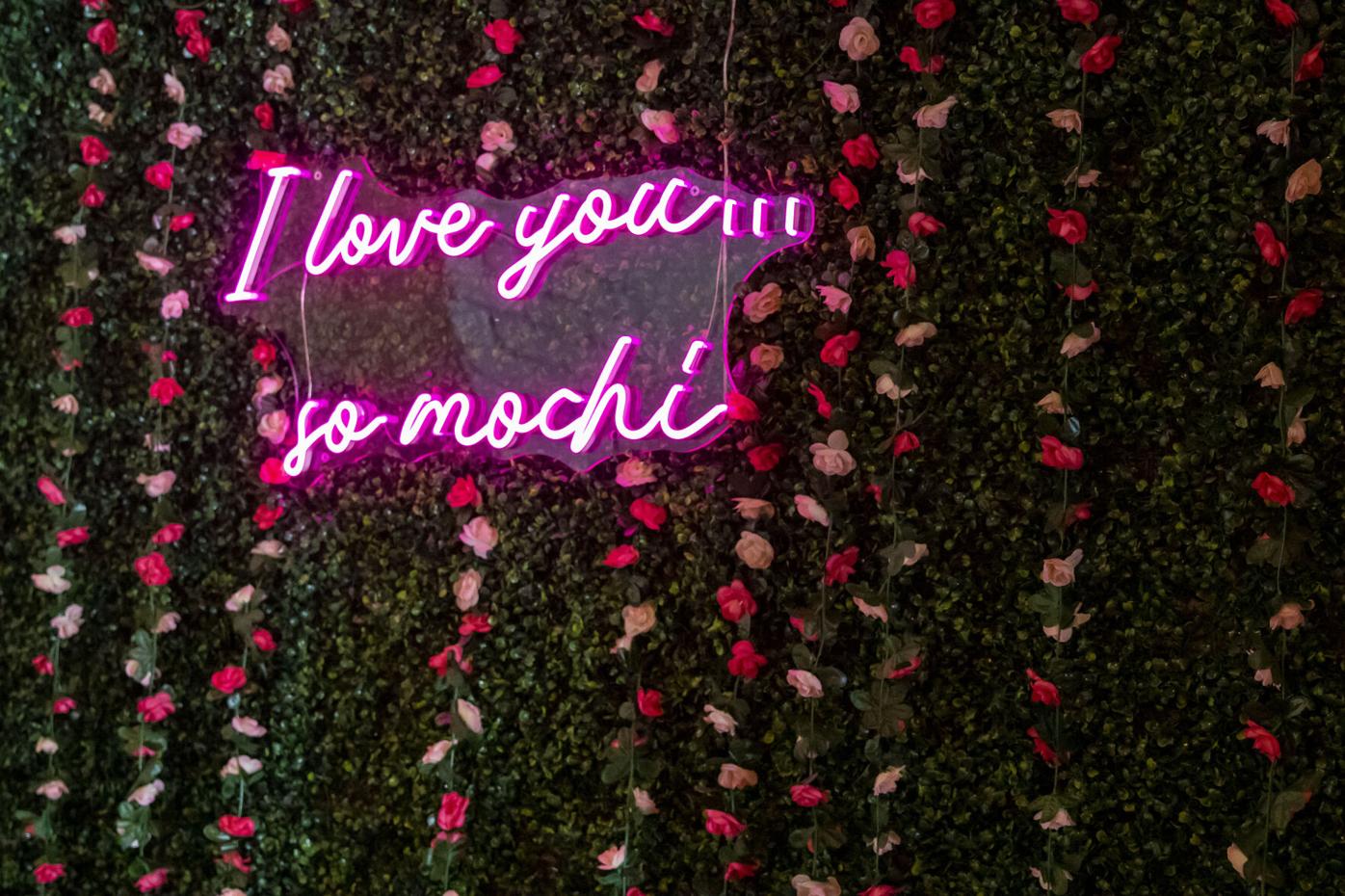 It's in his most tiring moments when David Lee thinks of his parents.

"One thing I do see in my parents is that they still grind through it," Lee said. "Even if you're tired, and you're drained out, you still got to do it, because no one else will do it."

Growing up, Lee saw firsthand the time and dedication that went in to running a business. His parents owned and operated numerous businesses, selling furniture and cell phones.

As the co-owner, operator and chef of two local restaurants, Lee's life is fast paced. Between lending an extra hand with delivery orders to navigating the pandemic's impact on ingredient shortages, thinking about how far his family has come in their entrepreneurial endeavors keeps him motivated.

Alongside his brother-in-law and sister, Hannah Choi, Lee opened up Umami Sushi, a Japanese/Korean cuisine kitchen. The restaurant is housed in the retail center located at 700 N LBJ Drive. A few weeks ago, the family opened their latest business venture Mochinut, located just a few doors down from Umami.

A Californian-based franchise, Mochinut serves up mochi donuts and boba milk tea. Unlike a traditional donut, mochi donuts are made with rice flour, making their texture chewy and stretchy, similar to the texture of Japanese mochi ice cream.

The bakery offers 30 different flavors of donuts, ranging from blueberry, caramel churro, guava and ube. A select number of flavors are offered at a time, with flavor selections rotating every three to four days.

When it comes to tea, Choi said the shop's most popular seller is the brown sugar milk tea which is made with whole milk and contains tapioca pearls, brown sugar and topped with homemade whipped cream. Mochinut offers other milk tea flavors including green tea, ube and coffee.

In October, Mochinut will start selling Korean street hot dogs, which are typically wrapped in sausage and cheese, coated with batter and breadcrumbs and deep-fried until golden brown. Additions of oolong, jasmine and black tea will join the menu as well.

Even with Mochinut being new to the area, Lee and Choi are already feeling the love. They've received customers from surrounding towns like Kyle and Buda and continue to sell out certain items, like the PB & J mochi donut, during daily business hours.

Baylor Howerton, a STEM sophomore, discovered Mochinut after seeing one of her sorority sisters post about it on Instagram Stories. Howerton was interested in trying out the new bakery, specifically for its boba tea.

"I love boba and I'm always looking for like a good boba place because it's really popular in Korea and Hawaii and that's where I used to live," Howerton said. "That's like authentic boba and like, it's just hard to find like good boba here. So, I wanted to give this a try."

Prior to starting their own restaurant, Lee and Choi had spent years in the restaurant industry; Lee was a chef and Choi worked as a server. However, working in the industry long-term, wasn't always part of their plan.

The siblings went to college to study English and had dreamed of becoming teachers. Lee was set on wanting to travel the world and teach English. Choi also wanted to teach English and open up a daycare in Korea.

"I actually went to Korea, did study abroad and then I taught kids for a while," Choi said. "But then I noticed that kind of was not my style and then I wanted to come back to America because I was born and raised here."

After moving back home, Choi got married. At the time, her husband and brother were working as chefs. She figured her experience working as a server in combination with her brother and husband's cooking skills was the ideal recipe to start their own restaurant.

With her husband and brother being more hands-on when it comes to the food, Choi takes a behind-the-scenes approach, taking care of the restaurants' financials and inventory. While opening up a family restaurant wasn't part of her original career plan, Choi said the fast-paced environment that comes with running a business is a great fit for her.

"It does get tiring sometimes, but at the end of the day, it's very satisfying," Choi said. "It's satisfying to see people enjoy your food to see people post then leave really good reviews. Providing good food, providing good service and just making people happy like that gives me fulfillment also."

They settled on opening Umami and Mochinut in San Marcos as they were familiar with the surrounding area — Choi went to school at the University of Texas and Lee went to Texas State. While the familiarity was one thing, they also noticed San Marcos was missing authentic Asian cuisine.

"We've been to a few restaurants here, but you know, we just thought, it was just missing the authenticity," Lee said.

While the journey of growing their businesses across the city has been rewarding, the ongoing pandemic presents daily challenges that make the tough job of running a restaurant more difficult. At the start of the pandemic, Lee and Choi's family business took a hit.

Before starting Mochinut, the family was running Casa Choi, which was housed in the same location the bakery is currently in. Casa Choi served dishes inspired by Korean barbecue and Mexican flavors like kimchi fries and bulgogi burritos. After nearly two years of running the restaurant, they decided to close it down.

"It was really hard. The restaurant industry took a really big hit. Casa Choi had been open for almost two years. So, it was like, a brand-new business," Choi said. "We had employees and we couldn't keep up with it. It was, it was hard."

Rather than deciding to reopen Casa Choi, the family was inspired to bring something new and different to San Marcos. After trying Mochinut for themselves, they thought it would be a cool, trendy business to introduce to the area.

Opening up their own restaurants as a way to prepare for the future, played an important role in their decision to do so. In their culture, Lee said, it's important for children to care for their parents once they are older.

"Eventually, when my parents retire, we're going to be taking care of them, meaning financially. Whatever they need house, homes, cars, vehicles, groceries we'll be taken care of all of that," Lee said.

As they embark on the journey of running Mochinut, their commitment to putting family over business remains the same. With Choi recently having a child of her own, opening Mochinut was an opportunity for the family to plan and care for the generations to come, Lee said.