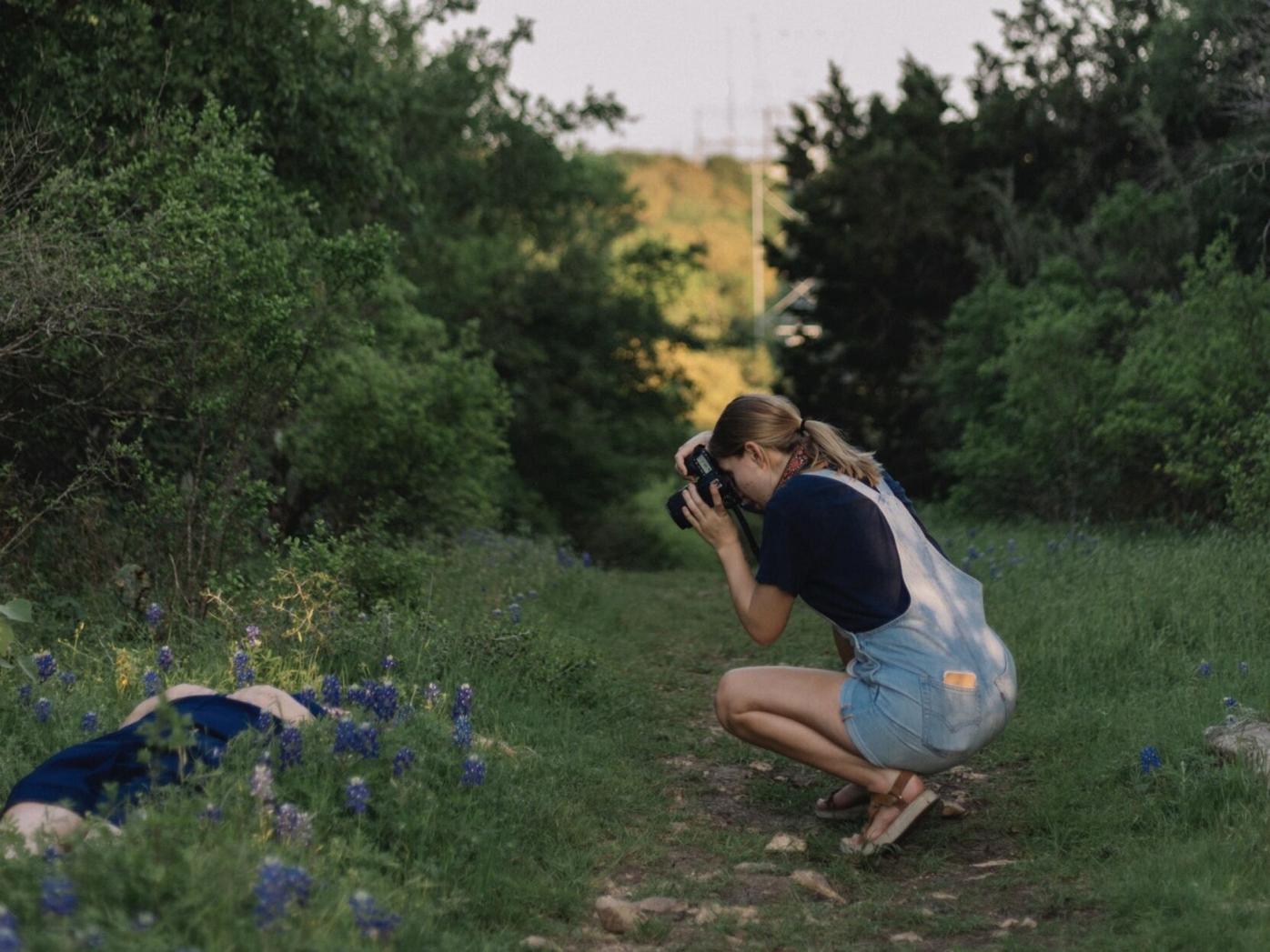 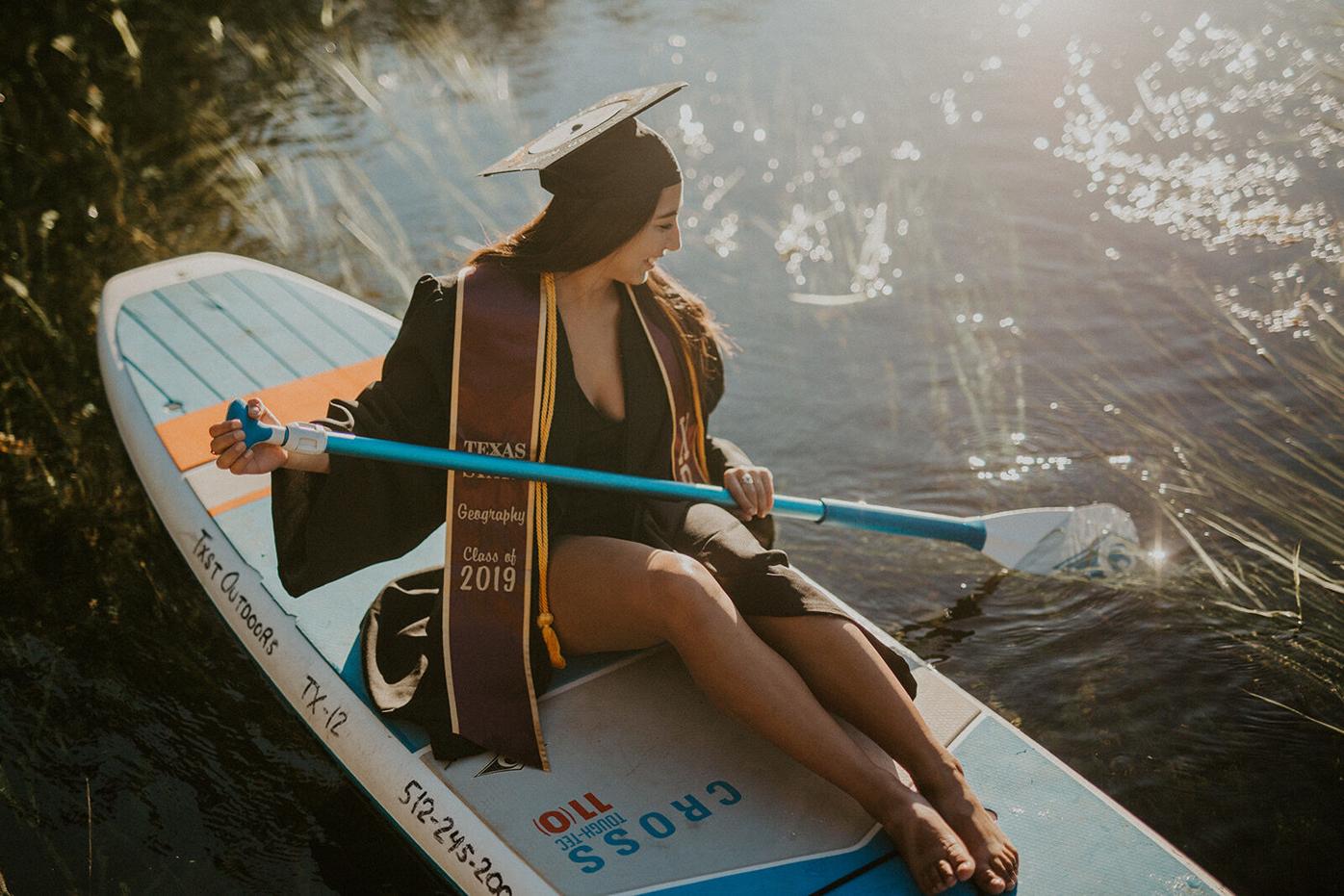 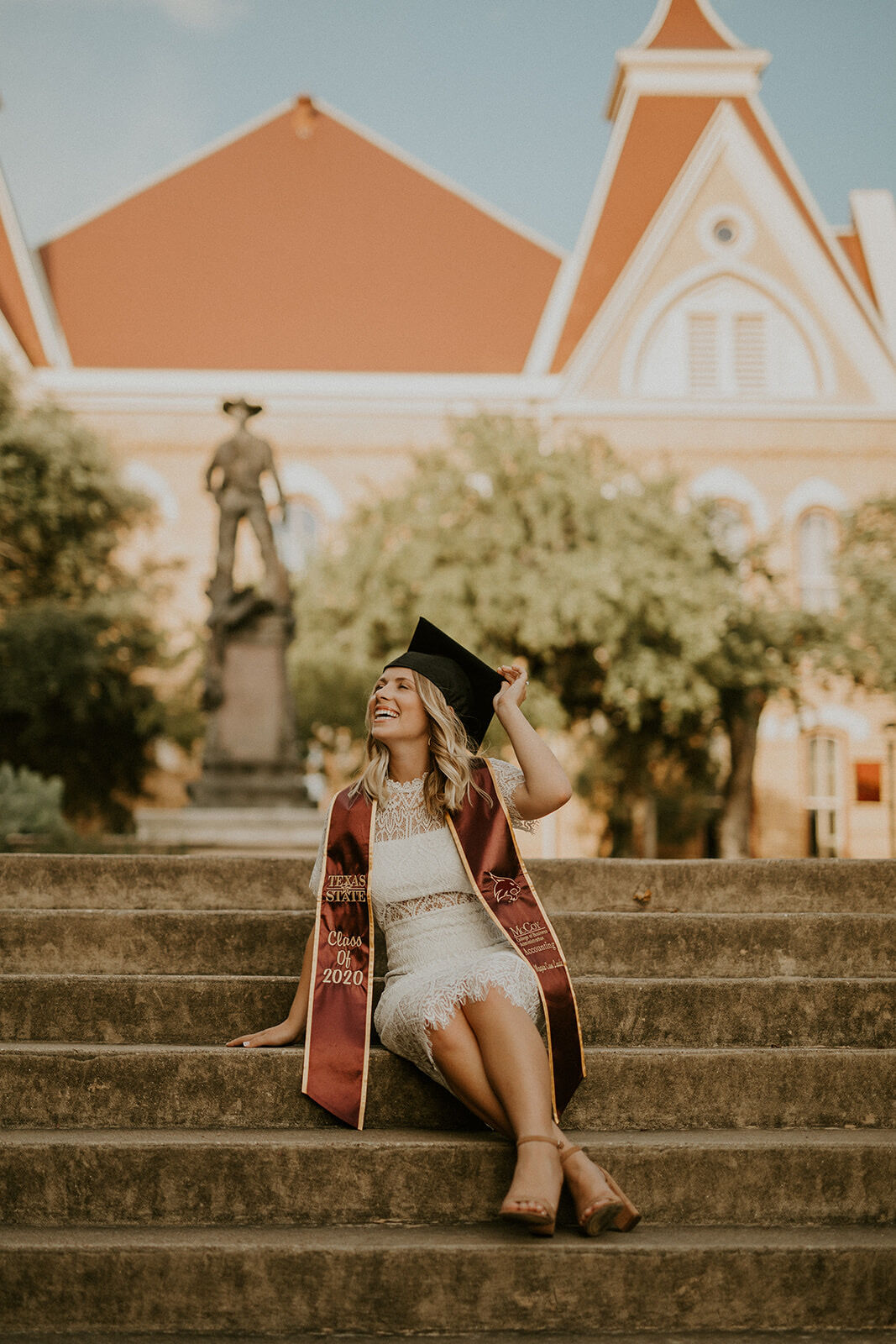 Rachel Alonzo poses during a graduation portrait session with Albert Suárez, on the steps of Old Main. Alonzo is doing one of Suárez's signatures poses, which he complemented with a "cinematic look with warmer tones."

While strolling campus near the end of each fall and spring semester, it is routine to watch seniors pose under the UAC arch as the shutter of a camera opens and closes at rapid speed. Not long after, graduation photos with colorful visual elements make their way to social media and save-the-date fliers in family mailboxes.

Those photos showing proud, future Texas State graduates do not happen without the eye looking into the camera — the people showing off their flexibility and core strength to get the best composition possible. The photographers are just as ecstatic as those graduating, becoming integral to students' final memories on campus.

From there, the few photos she took for her friends jump-started her career in portrait photography and her small business, Casey Schlickeisen Photography.

“It was so freeing,” Schlickeisen says. “I just loved and still love meeting so many different people, connecting and giving them lifelong memories that they can show their kids and grandkids someday.”

For Schlickeisen, the most important part of her job is connecting with her clients. As a photographer, Schlickeisen tries to be her most authentic self and show her clients that it is okay for them to do the same.

“I always say to my clients, ‘Think of the camera as an extension of me. Pretend the camera is not even here and you and I are just having a conversation,’” Schlickeisen says. “After that, it’s really easy to get photographs that reflect their true personality.”

Albert Suárez, a teaching assistant for the School of Journalism and Mass Communication and a San Marcos photographer, says with such talented photographers in the area, personality and stylistic differences are what set him apart from others.

“I usually play music during my sessions,” Suárez says. “It helps people kind of calm down and just relax a little bit. That’s one of my favorite parts; when you can tell when their shoulders are down a little more, and they're just smiling naturally. It's not like a forced thing."

Suárez says people have distinguished his work from others' through his editing style. He tends to go for a cinematic look with warmer tones to complement his signature poses.

Suárez’s career began after learning the basics of photography in his senior year of high school when he received the opportunity to work for his school district's public relations department.

After high school, Suárez came to Texas State to earn a bachelor's in communication design. Four years later, Suárez Creative was born and has not stopped growing since. Suárez says he never thought he would become a full-time photographer and business owner.

“I don't want to say that it fell on my lap,” Suárez says. “But at the same time, it's all about establishing those connections and building those relationships with people, because that's what they'll remember the most.”

With an uprising market of small businesses brought to light via social media platforms, photographers are gaining clientele from more posting and advertising. However, Suárez says an overwhelming majority of graduation photographer clients actually come from referrals and networking.

Brianna Reeb, Texas State alumna and graduation photographer, says despite the hardships COVID-19 has created, her business has experienced some success.

“Instead of only being able to shoot on the weekends, when there's not people walking all over campus, I was able to shoot Monday through Sunday, which was super convenient and nice to have that flexibility with scheduling,” Reeb says. “So I was able to book a lot more senior sessions than I normally would have.”

Reeb graduated with a bachelor's in public relations, but had no intentions of a career in photography, as it was only something she loved to do on the side. Halfway through her undergraduate degree, Reeb invested in a camera, watched YouTube videos on photography and began taking senior portraits. Now, at age 25, her small business, Simply Breezy Photography, has blossomed into her full-time job.

Reeb wants to create a fun experience for those she photographs. Knowing how intimidating it is to pose in front of the camera, Reeb says she becomes her clients' “hype girl".

“I just want my clients to feel super confident and beautiful in front of the camera,” Reeb says. “Every single time I take a really good photo, I will go up and show my client that photo behind my camera because I want them to see just how pretty they look.”

As a result, she creates friendships with her clients, who start to view her as more than just the photographer.

“A lot of times I feel weird even calling people clients because I consider them more as a friend at that point,” Reeb says. “So I think that's what makes it a little different for me, is just making sure that they know I'm first and foremost their friend. And then secondly, I am their photographer.”

For graduation photographers, senior sessions go beyond just doing what they love. They get to experience the joy that comes along with graduating college — a major stepping stone in a student's life.

"This is such a huge life event and a big milestone for some people,” Suárez says. “They want these photos at the end of their term to be captured so that they can share with friends and family for the rest of their lives. My main driving force behind my photography is definitely the experiences that they share.”