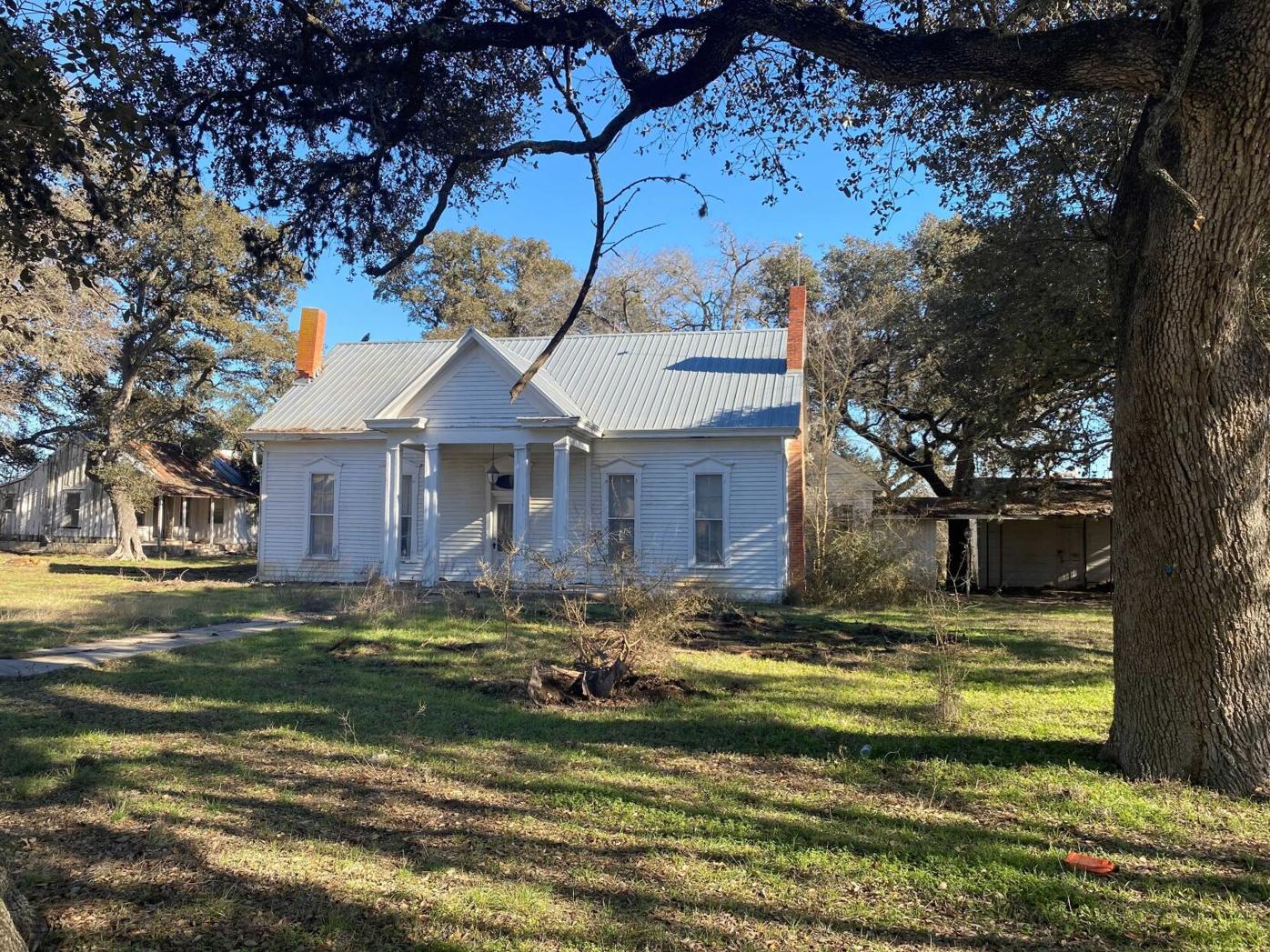 Al Loman's Historical home, Monday, Feb. 22, 2021, at 3603 Hunter Road in San Marcos, Texas. Al Lowman, much like Perkins, was an active member of the Hays County Historical Commission and the Heritage Association of San Marcos. 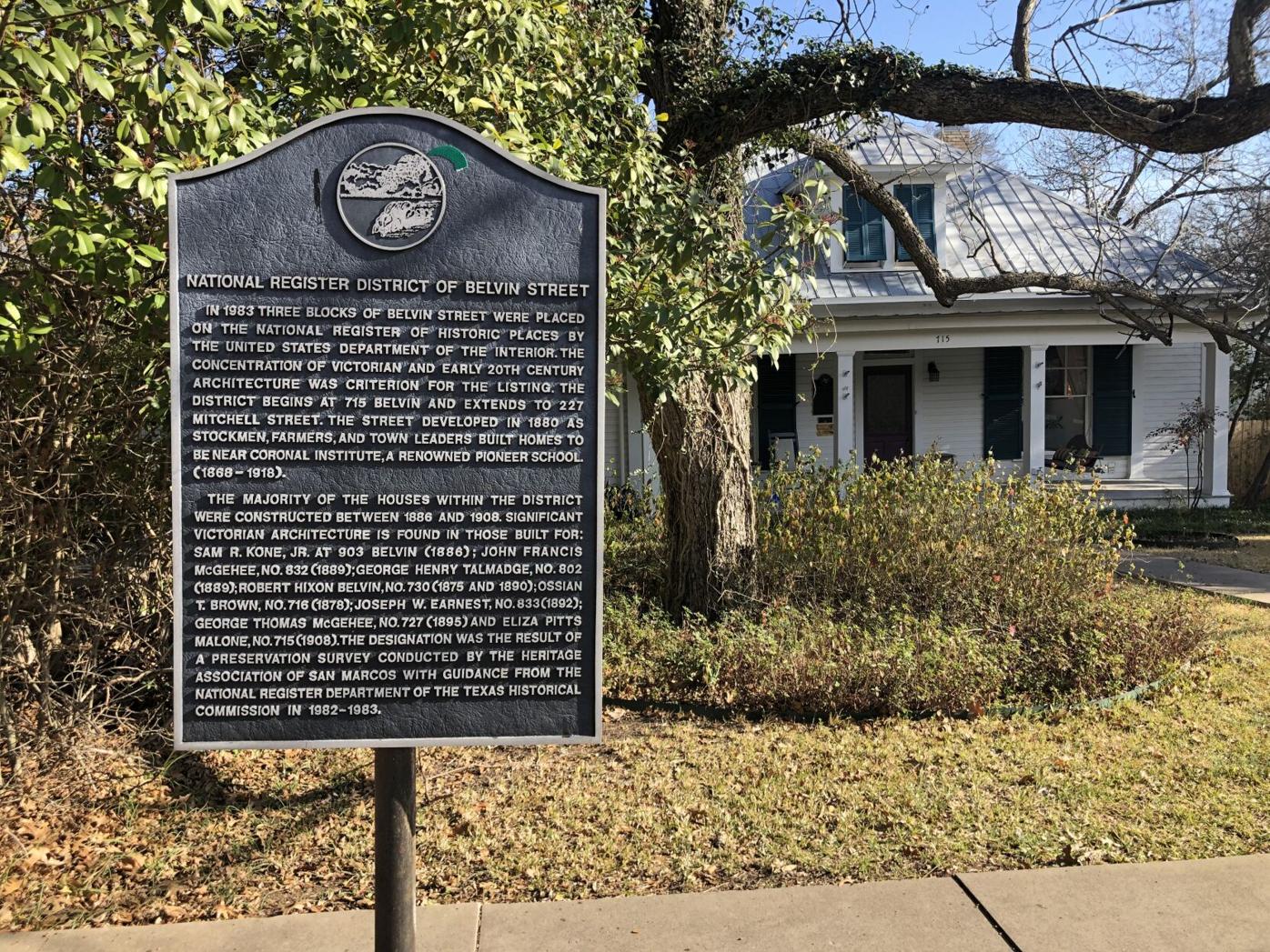 A signpost marking the entry to the Historic Belvin Street, Wednesday, Feb. 3, 2021, in San Marcos, TX. On this street, like many of the homes within the 7 historic districts of San Marcos, certain residences dating back to the late 1800s. 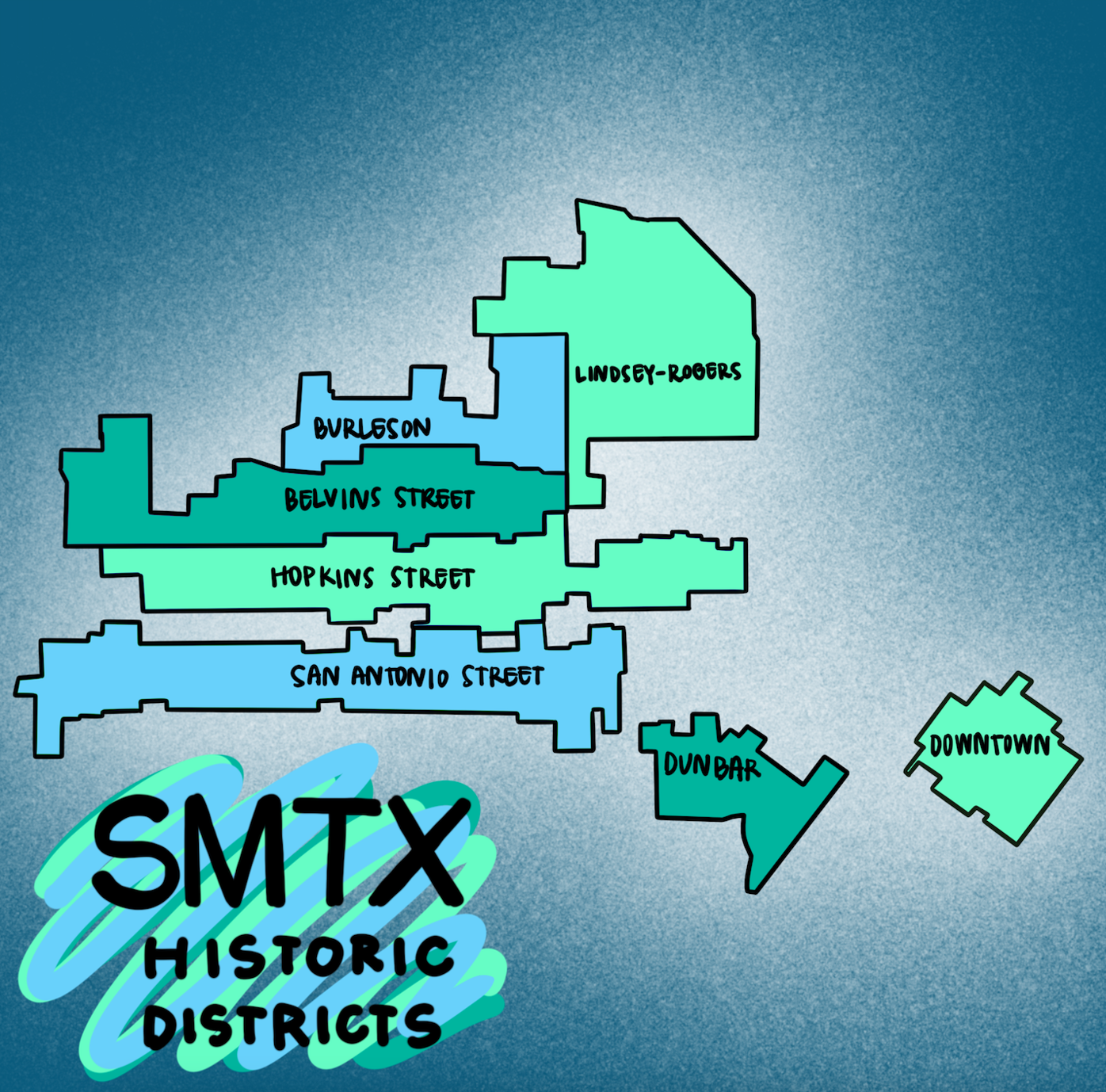 The San Marcos Historic District Map comprised of all seven districts, six of which are residential while the downtown district is commercial.

Embedded within neighborhoods, tucked away behind the allure of shopping outlets and the bright lights of The Square rests hundreds of historical homes displaying clues to the local families, travelers and stories that established the rich 200-year-old history of San Marcos.

But behind the plaques and historically-marked street signs, the homes and buildings are first carefully identified and actively protected from decay and demolition by a devoted group of seven San Marcos citizens, three of whom are residents in the districts themselves.

The six residential districts cover the grounds just outside The Square and past North Street, creating a showcase of Victorian, Classical Revival and Craftsman architecture constructed between 1880 and the 1940s. Homes in this district are protected by the Historic Preservation Commission, spearheaded by local resident Ryan Patrick Perkins, the Historic Preservation Commission chairman.

Perkins is an eighth-generation San Marcos local who grew up inside the Lindsey-Rogers Historic District with a passion for keeping his community's centuries-long legacy alive. His most recent fight has been for the Johnson-Lowman farmstead, an 1870s home at risk for demolition if not designated as a historic landmark by the city.

"The old farmstead is in pretty bad condition," Perkins says. "It’s mostly because it’s been left to rot since the Lowmans left here. Cattle came into the home, drunk driver, vagrants."

The decay is primarily what Perkins tries to prevent in Historic District residences. With the help of Evan Thompson, the executive director of Preservation Texas, Perkins hopes to make the case that the farmstead land holds a rich history, wrapped even into the homes' most recent 65-year resident and historian Al Lowman.

Al Lowman, much like Perkins, was an active member of the Hays County Historical Commission and the Heritage Association of San Marcos. However, despite the commitments, his home is not designated as a historic landmark, leaving it at risk for demolition.

Cathy Lowman, Al Lowman's daughter, grew up inside the main house and continues the family legacy by raising her own family just a few miles down the road in San Marcos. Cathy Lowman passes by the house daily and hopes to continue seeing the house stand tall.

"I know my dad really would have liked to see the house saved," Cathy Lowman says.

Al Lowman passed away in 2013, but through his family, community activism, books and articles, his legacy continues to live on throughout the San Marcos community.

“Everyone who knew [Al Lowman] really respected him,” Thompson says. “He was a great historian, so it would be a shame to see a historian’s house gone.”

Because the main house is over 80 years old, the city was able to temporarily halt the property demolition using the Demolition Delay Review ordinance, which, although not fully stopping the demolition, provides the commission up to 180 days to find an alternative solution.

“The idea behind the Demolition Delay Review is that whoever wants to demolish that property is out there looking for someone who wants to buy the property or is looking to preserve that property where it is,” Brake says.

Brake says the lack of historic designation on the home is what leaves Lowman's property so vulnerable to demolition. For full protection, a house must be designated as a local or district landmark. Working with private landowners to attain the designation is the commission's top priority moving forward.

“A lot of people get the designation confused,” Brake says. “We can have a lot of old things, but they’re not designated historic with what I call a “big H”, you know? They’re only historic with a ‘little h’ because they’re old.”

The difference between "old" and "historic" is not only important to city officials but also to locals and visitors who come to San Marcos for its intrinsic quality and beauty. Perkins, whose family came to San Marcos in 1844, sees the beauty in the city and says he never wants to live anywhere else.

"[San Marcos has] always been that sweet spot where we have this beautiful, crystal water coming from the aquifer, we’ve got the most fertile soil here and we have the safety of the hill country," Perkins says. "And then we just have [a] location; we’re not at risk of flooding. We don’t have a whole lot of snow or bad weather."

Over the past few decades, Perkins' community within San Marcos has grown beyond what he knew from his childhood and now includes newer residents eager to embrace the city's quality of life, proximity to two major Texas cities and history of past generations.

Both Perkins and Brake urge newcomers to take a stroll through one of San Marcos' seven historic districts, read the signposts that mark each home and street and learn from the history taught for so long. After all, the stories, as Perkins believes, are the most important part of preserving history.

“Humans move forward on the stories of our past,” Perkins says. “We’ve been passing stories down for generations, and so, good, bad and ugly, it’s important to share them so we have context.”

To learn more about the Historic Preservation Commission in San Marcos visit its website.