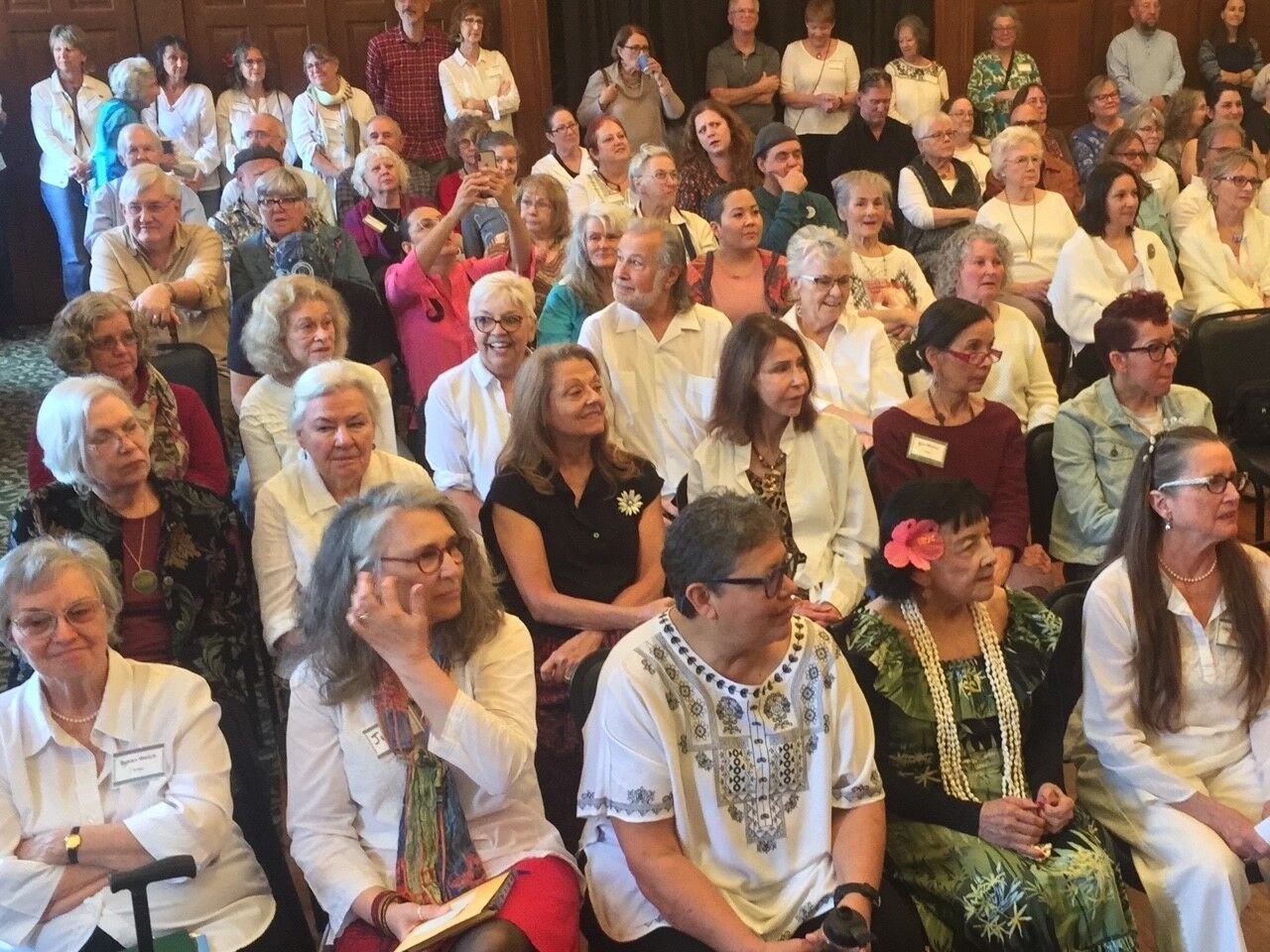 The audience of "The Language Women Speak" listens to one of the poets in the Garden Room, Sunday, March 8, 2020, at the Price Center. 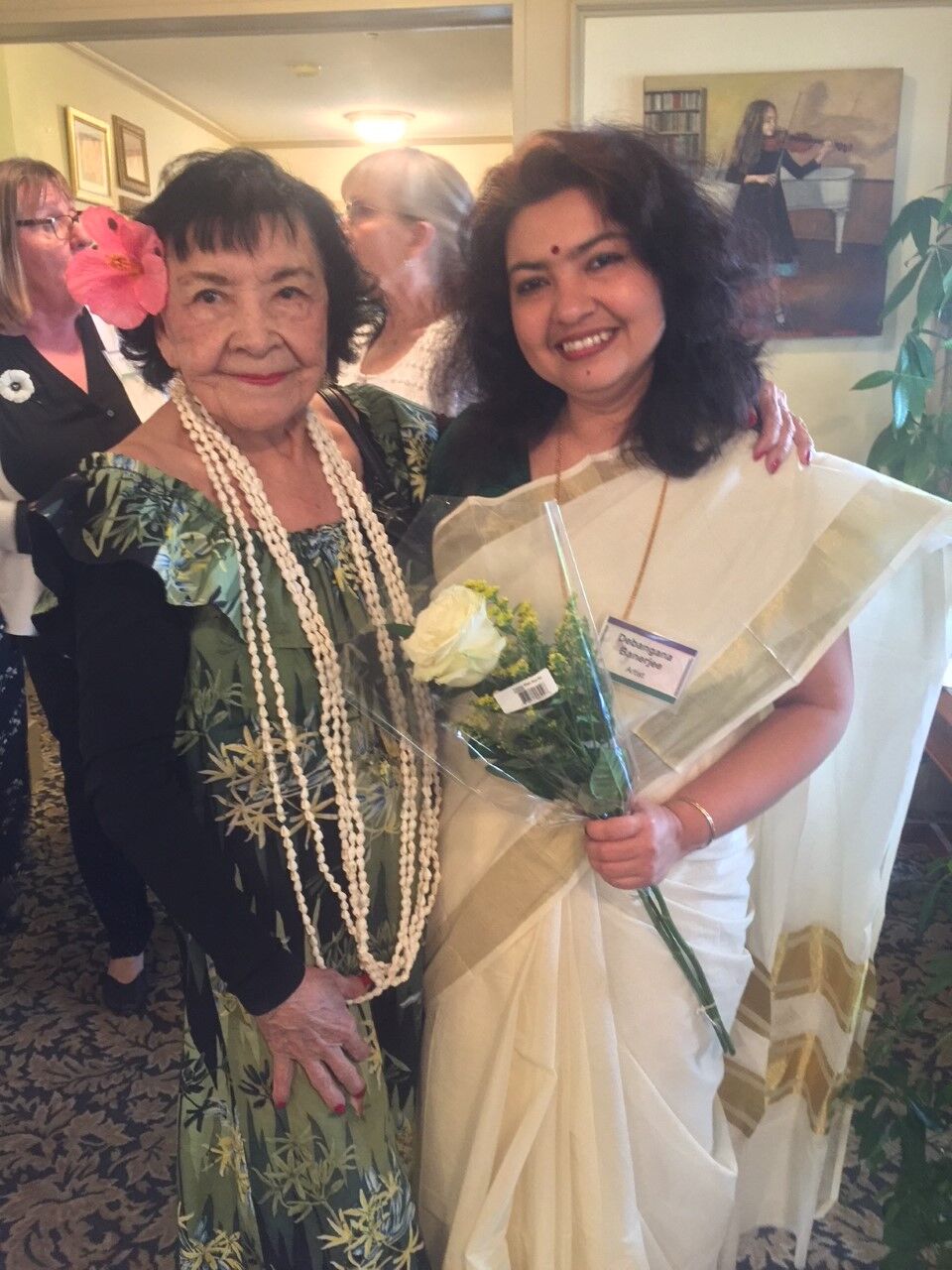 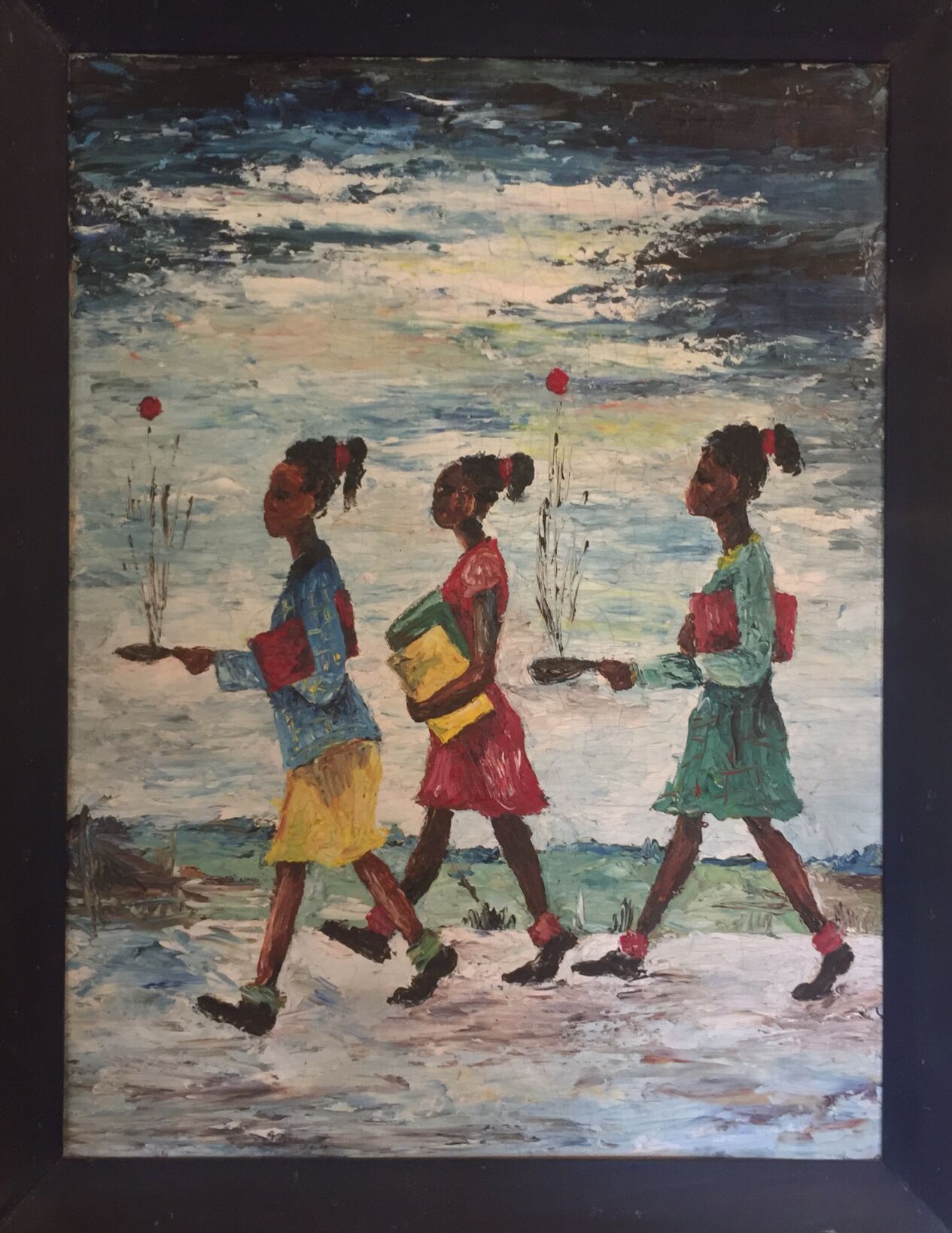 Painting of "Girls Waling to school in Dallas" by Merry Kone Fitzpatrick displayed during "The Language Women Speak".

Female artists and creatives of Hays County will have their time to shine as the San Marcos Price Center begins preparations for its third annual International Women's Day exhibit.

For a $10 application fee, female artists are called to share their artwork with the Price Center from Jan. 25-26, for its upcoming all-women art show titled, “From Challenge Comes Change”.

The free, socially-distanced art show will run from Feb. 6 through March 26 in the center's Garden Room and will feature female multimedia and family-friendly artwork created exclusively by women.

Behind the scenes of this year’s show, Joan Nagel, board director and art chair of the Price Center, is working alongside local artists Margaret Adie and Garrie Borden to plan the International Women’s Day exhibit. Nagel says the event's theme derives from the ongoing trek women face.

“If you look at just women’s history, there’s always a challenge, and we always want a change,” Nagel says.

Through the exhibit, the event committee hopes to bring about change in the community by promoting gender equality, celebrating women’s achievements and increasing the visibility of women’s work.

“One of the things we like to do is have a theme that is pretty broad so that artists’ interpretation of [the theme] can fit in any number of ways,” Adie says. "What I might think of with ‘challenge’, might be something somebody else thinks of, which is awesome.”

Although women connecting with other women is a big driver behind the choice of theme, female artists are also given the chance to stand out from the shadow of male-dominated art.

“After centuries of men recording the history of male achievement, International Women’s Day is a chance to focus on what women have, and can, accomplish,” Borden says. “We want to celebrate the spirit of women who have inspired and challenged us to express our uniquely female creativity.”

Last year's theme for the International Women’s Day event, “The Language Women Speak”, attracted an all-time high of contributors with 87 participating artists. Not only was the outcome significant, but participant ages ranged anywhere from 19 to 102.

“Women came out of the woodwork," Nagel says. "Women came from around Wimberley, Canyon Lake and Dripping Springs; some of them had never shown in San Marcos before and they were so excited to have that opportunity. It was a really beautiful and heartwarming thing.”

The show would normally include a reception incorporating visual and performing arts such as poetry readings, dramatic scene performances, live music and dance routines. These segments opened new horizons for local female artists and offered a unique form of entertainment to the community.

However, COVID-19 has compromised this year’s festivities, canceling the usual March 9 celebrations. Due to social distancing measures, the planning committee says they are struggling to organize a virtual event.

“We’ve talked a little bit about having something online, but no one is taking the lead on it,” Nagel says.

To counter the bump in the road and bring the community together, the planning committee has set up a passage for a collaborative event that anyone in Hays County can participate in called “Tribute to Women Who Inspire".

“ [“Tribute to Women Who Inspire”] goes with the show’s theme,” Adie says. “When challenge comes, we had to change things up.”

People are encouraged to share a photo or drawn image of a woman they find admirable or influential. Submissions are due Feb. 2 and will be turned in directly to the Price Center. Donated artwork will be made into a banner display for the Garden Room during the run of “From Challenge Comes Change”.

The Price Center is known for its all-inclusive events which provide the San Marcos community with a safe space to explore diverse realms of expression. This segment of female artistry serves as a reminder for locals that despite turbulent times, art still speaks and connects people.

For more information on the Price Center and upcoming events, visit its website or stop by the center at 222 W. San Antonio St.

The Hays County Local Health Department reports one new COVID-19-related fatality June 19-21, a Dripping Springs woman in her 40s.  There have been a total of 259 fatalities in the county. The county also reported 31 new lab-confirmed cases of COVID-19 and 12 recoveries, bringing the total n…

With the smell of barbecue filling the air, the sound of oldies music ringing out and the warm sun shining down, the community gathered at San Marcos City Plaza Park on Saturday for the San Marcos Juneteenth Foundation's 27th annual Charity Cook-off.

After a 16-month closure due to the COVID-19 pandemic, the Calaboose African American History Museum celebrated Juneteenth by showcasing its exhibit, “100 Years of Black Businesses”.

University Police Department Chief of Police and Director Laurie Clouse has resigned, according to a statement from Vice President for Finance and Support Services Eric Algoe.

For San Marcos' third Summer in the Park of the season, Shelley King and her band took control of the audience and stage. Together, this powerhouse of a band works through sounds ranging from blues to roots-rock, even belting out gospel.

The Hays County Local Health Department reports one new COVID-19 fatality,  a Buda woman in her 40s. There have been a total of 258 COVID-19-related fatalities in the county since the start of the pandemic. The county also reported 17 new lab-confirmed cases of COVID-19 and 19 recoveries, br…