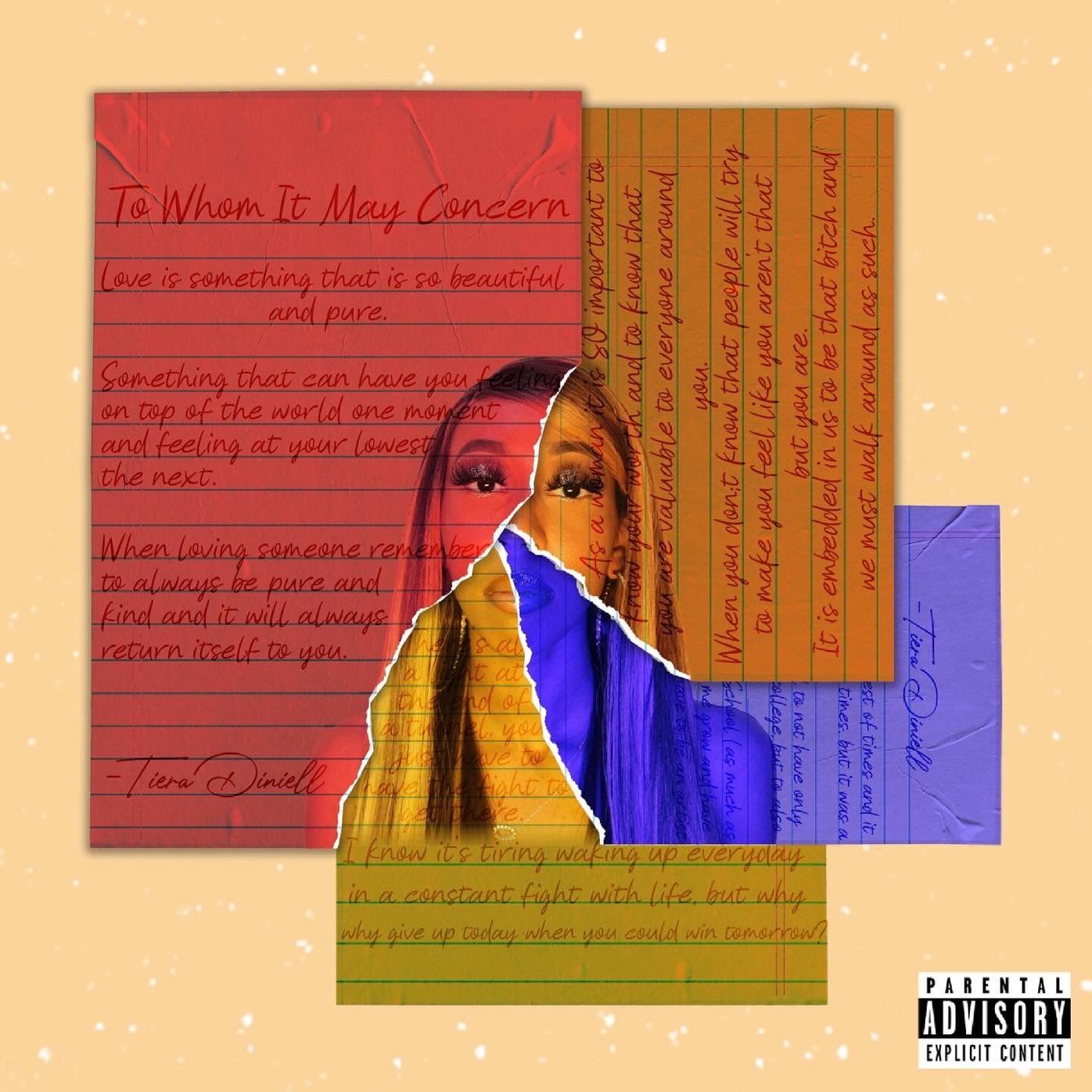 Tiera Deniell's debut album cover, "To Whom It May Concern." The album was released on April 30, 2020. 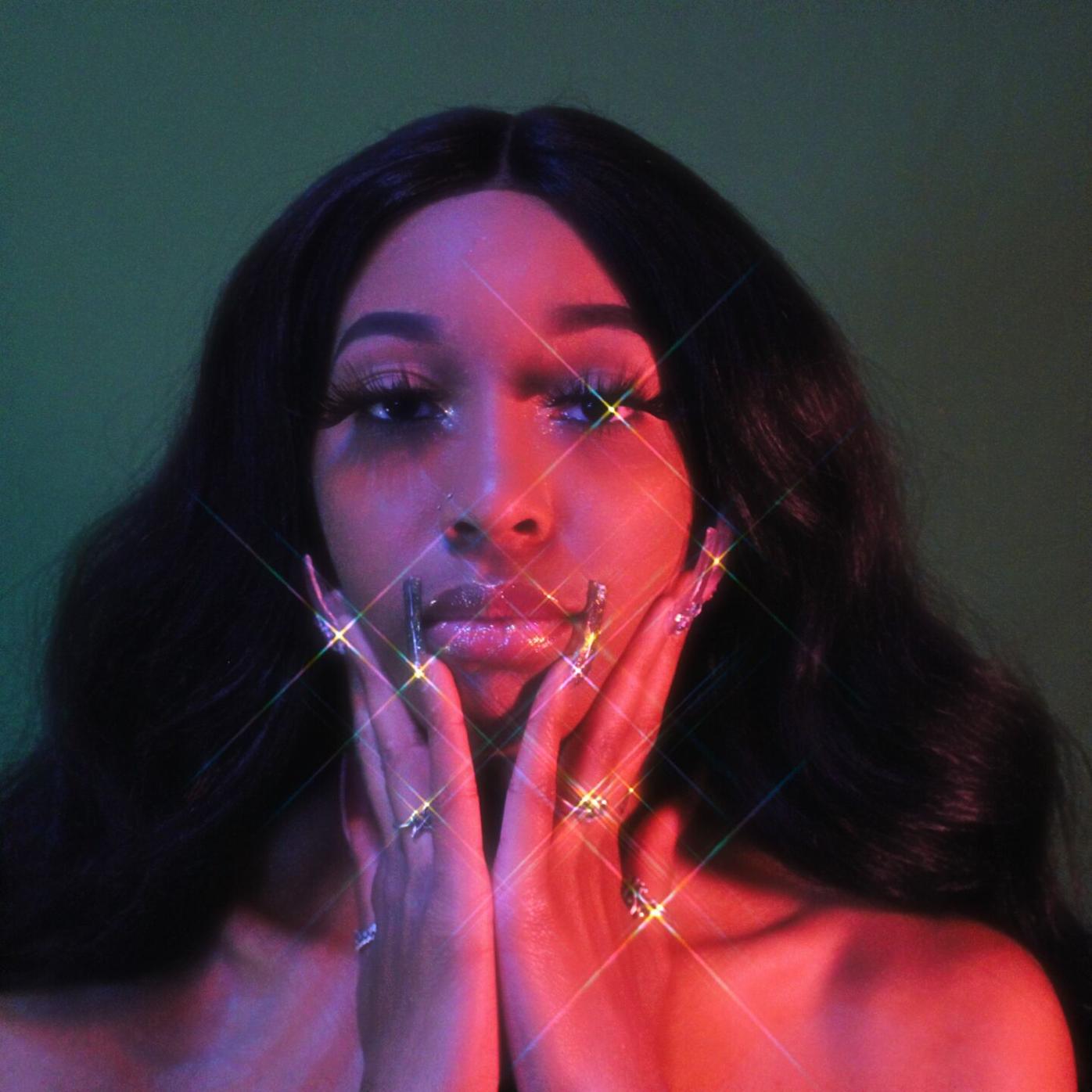 Working on the 10-song album for over a year, Denielll, a pre-rehabilitation science senior and music minor, was prepared to release her debut album amid the COVID-19 pandemic. However, Deniell's friend and film director McKenzie Ousley, a film production alumna, encouraged Deniell to take her artistry one step further.

“We were just talking about — or pictured, maybe — just a video, something super simple,” Ousley says. “She was kind of explaining to us the album, telling us the title and what it meant to her and I was like, ‘You know what? We should do a visual album.’ And the room got really quiet, I was like, ‘Hear me out, this is something that we need right now, and this is something that we can do.’ I had to convince them, but I was like, ‘Y’all, we can do this, we got this, we don’t got anything but time.’ Everything was online, so I was like ‘Why not?’”

Deniell and Ousley created five music videos for the visual album, releasing them separately in May 2020, shortly after the album's release on April 30, 2020. The videos, "Put It On Me," "You Do," "Alone," "4 A.M." and "Intro," tell the story of falling in and out of love — showing the honeymoon stage, moving from betrayal and hurt to the realization of the need for self-love.

“The entire album does have a side A and side B,” Ousley says. “And side A is supposed to be a little bit more upbeat and romantic, and side B is a little bit more sad, more emotional. So, we kind of want to tell a story of somebody who is going through all of those, which is why we put the videos out in the order that we did.”

Deniell began songwriting back in 2018 after her peers in the Texas State School of Music encouraged her to pick up the craft. She soon realized the niche she had for writing lyrics and took to her notebook, practicing writing over beats she found on YouTube.

"I met a lot of people who actually did music and who were creative, and they really pushed me to write music once they heard me sing. It was like, 'You don't write music?' And I was like, 'No, I've never tried it.' And they told me I should just try it, so one day I just went home and got a free beat off of YouTube and then just started writing," Deniell says. "I actually realized it comes very naturally and very easily to me, so I'm happy that they did that."

With her years of songwriting experience, Deniell took on the stage name, "Queen of R&B", a name that her friend and rapper, AK, gifted her. Deniell's decision to keep the title stems from her goals to make a career for herself in the music industry.

"I kind of liked the ring of it," Deniell says. "I use it on my social media platforms to kind of speak it into existence but to also make a presence for myself. When people come on my page and see it, they know what I'm striving for."

To help cultivate Deniell's industry presence with the visual album, Ousley's creative eye focused widely on colors within the videos to help present the sentiment of heartache, loneliness and admiration to resonate the myriad of feelings of falling in and out of love.

"We ended up having a discussion to see what other people felt," Ousley says. "Sometimes, when I hear songs, I can like see colors along with it so I tried to give each song its own color. And then it's like, 'Okay, we have a color, we have a vibe, we have a script, what does this mean to us? Where are we trying to go with this?' We tried to pick songs that were essential to the story because the album is about growth, it's about overcoming things, it's about being stronger."

At first, Deniell was hesitant to hop on board with the idea of a visual album — being cautious to stand in the camera's spotlight. However, she eventually compromised, prompting Ousley to direct and shoot videos for half the album. Still, the group faced strong challenges: bringing this vision to life while facing an ongoing global pandemic.

“At first, I was very iffy about it because I am camera shy, but, after thinking about it, I was like, ‘You know what? This is gonna make [the album] something big, so let's make it something huge,’” Deniell says. “We started like in May or June, so it was definitely peak quarantine. It was a little hard trying to pull some things together, but I think that, overall, we definitely pulled everything together, and the visual album came out really good.”

To limit the risk of COVID-19, the set was limited to seven to 10 people and all crew members wore a mask and followed social distancing guidelines. Despite the precautions and the small set, Roiyl Niblett, a fashion merchandising alumna and Deniell’s production stylist, learned a great deal from the whole experience.

“I feel like a lot of our team — we’re all friends, we’ve known each other for a while, we just all happen to have professions and want to do things that work together, so [Deniell] was able to bring us all together for this,” Niblett says.

After seeing the positive reaction the album and its visual counterpart received, Deniell says she feels encouraged to take on bigger projects in the near future.

“I’ve actually gotten so much love from the album, and I’m still surprised that so many people have listened to it, like just looking at my streams and everything,” Deniell says. “I definitely want to do more big projects. Like, this just gives me more motivation to put out bigger things.”

With the album and visual album now released, Deniell hopes her lyrics both resonate with her listeners and inspire them to grow as individuals.

“I hope they gain a sense of growth,” Deniell says. “I hope my music inspires them to grow. It definitely has helped me grow as a person, and I hope they listen to it and really just feel every emotion that I put into it.”

To learn more about Tiera Deniell follow her Instagram. "To Whom It May Concern" is available on Apple Music, Spotify and Soundcloud.

An earlier version of this story misspelled Roiyl Niblett's last name. It has been corrected.