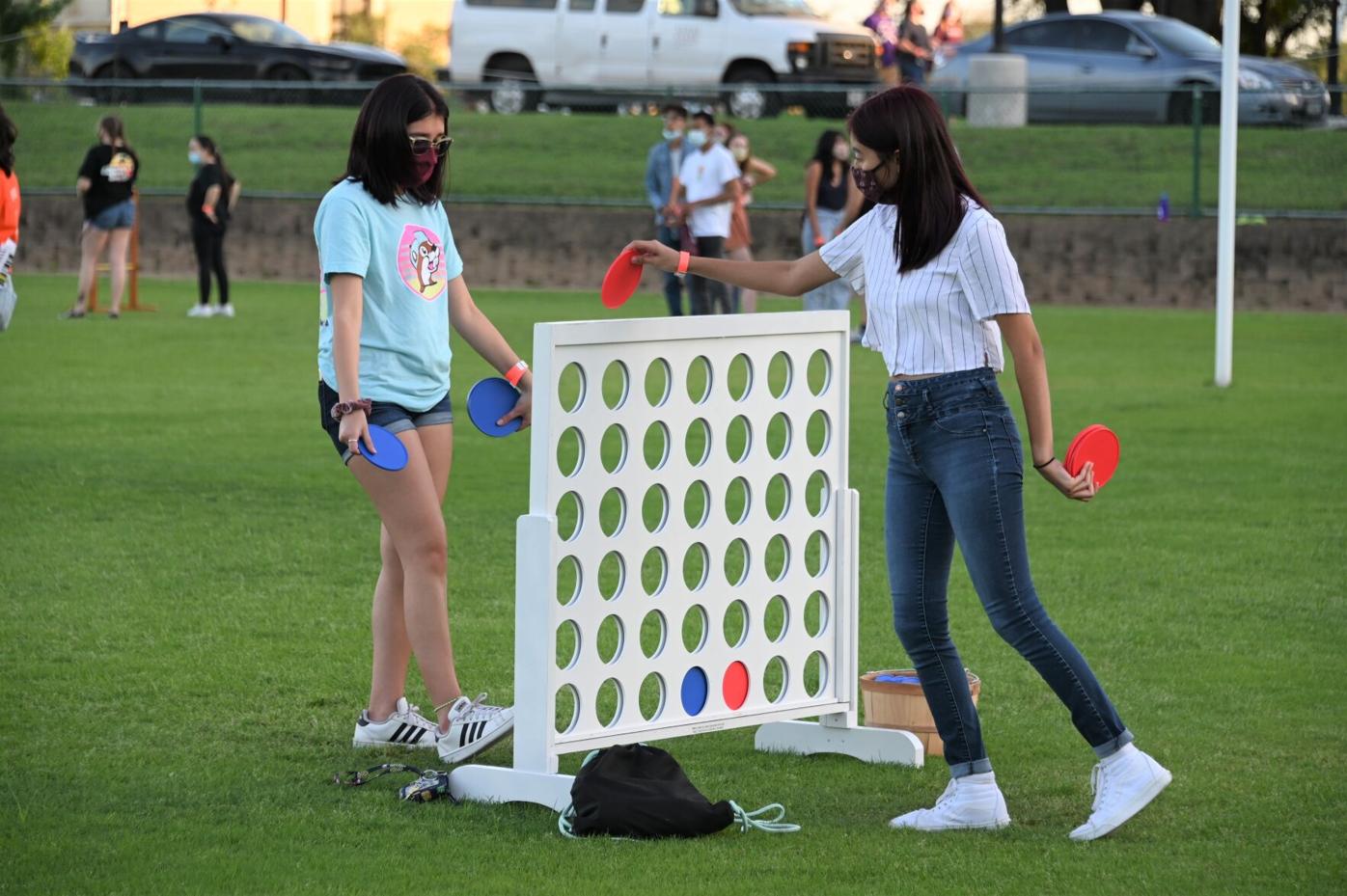 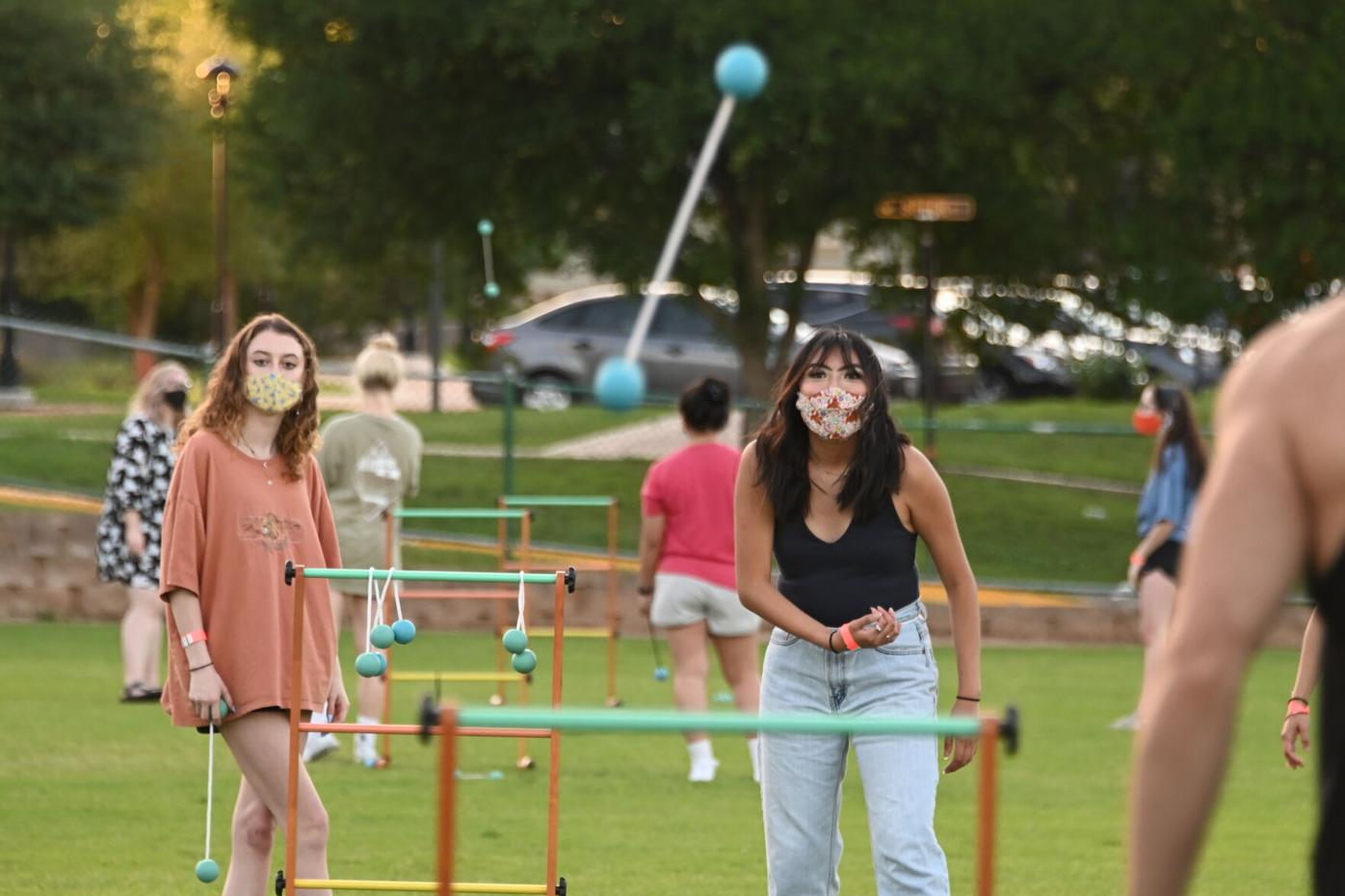 Jaelyn Dominguez, a social work freshman, lines up her clackers shot on Tuesday, May 4, 2021, at Gaillardia Fest.

As the end of the spring semester arrived on Texas State's campus and students began preparing for finals, the Student Association for Campus Activities (SACA) hosted its third annual Gaillardia Fest, a celebration dedicated to students, letting them unwind before end-of-year stress kicks in.

After hosting a virtual event last year, this year's event on May 4 was an outdoor, in-person affair at the West Campus Field to allow social distancing.

Blake Brooks, a SACA pride and traditions coordinator, says this event is special since it is the last event SACA hosts before finals start and summer begins.

"I feel like this is a great kind of mental relaxer for students to kind of, 'Okay, we just got done with a lot of midterms, we're about to hop into finals,'" Brooks says. "And that could be a lot for students, so just giving them an event where they can go outside, have fun and, you know, relieve some stress."

Gaillardia Fest is named after the university’s official flower and launched in 2019 after being formerly known as Riverfest. In previous years, the celebration has been heavily music-based, featuring live performances from local artists and Texas State students.

This year, however, SACA Pride and Traditions Coordinator Joclyn Martinez says the organization wanted to attract a more diverse crowd. New activities arrived for the outdoor festivities, including mini-golf, a blackout maze, a zipline and a photobooth.

"We only had a live DJ, and we did like yard games and inflatables," Martinez says. "We just thought like, 'These students are tired of being inside and in their dorms and at the computer so let's give them something fun and active to do.'"

The celebration was initially set to happen on April 30 but was rescheduled due to rainy weather. However, SACA did not let obstacles like precipitation and COVID-19 safety guidelines take away its community spirit.

"Communication is one thing that just helped us get through the obstacles because there's so many different pieces that fall in line when it comes to making and planning these events that we all have to make sure we're on the same page, so when these obstacles do come up that everyone is aware of them," Brooks says.

With much of the planning and organizing done by Brooks and Martinez, they say they're proud of the way the event turned out.

"I would say the best part for me is just looking back and seeing what we've done for the students on campus," Martinez says. "Like knowing that we did that in the mix of a pandemic, and we're not stopped by anything. Like yeah, it rained, but we found a solution...We just try not to let anything bring us down."

The event's musical act, DJ Ortiz, says the day could not have been a better time to bring the community together again.

"I'm definitely glad this was in-person," Ortiz says. "Like it was absolutely perfect weather, it wasn't too hot, there wasn't a cloud in the sky and it was just like the perfect day to have it. I'm really glad that it was in person and everything went well."

Ortiz, who also plays at other community events like football game tailgates, says his favorite part of being a DJ is playing music for different atmospheres and being able to "bring a different vibe" to people.

Playing at Gaillardia Fest this year was special for him since he played a lot of fun music different from music played in settings such as a club or bar. He says he's glad he could be there to help students destress and give them a taste of the college experience that some of them may have missed out on this year.

"It's definitely important and it's, you know, very much appreciated [when we] have events like Gaillardia Fest, because it gives the students, a chance to kind of just relax and let loose for a little bit," Ortiz says. "And it's just another great way to just get a whole feel for the university and to get the whole college lifestyle that everybody hopes to get."

For Martinez and Brooks, hosting Gaillardia Fest in person this year marked the beginning of a return to normal. They look forward to seeing what SACA and its members can do next year, once it becomes safe to gather in-person with the community more often again.

"For me, it felt normal. Back to normal," Martinez says. "Yeah we all had a mask on, but to be able to be around your friends or people you don't know was nice, so it just felt normal. And next year, it's supposed to be back to normal somewhat, so I'm excited to see that."

To learn more about SACA and its events, visit its website.