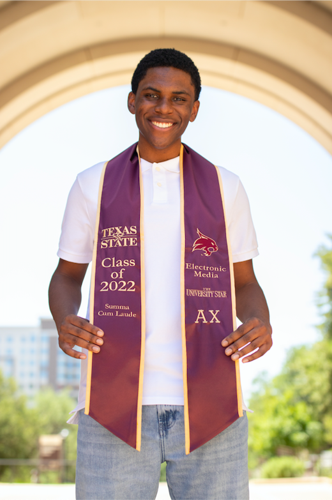 Kim Davis Jr. smiles for a graduation photo at the UAC. 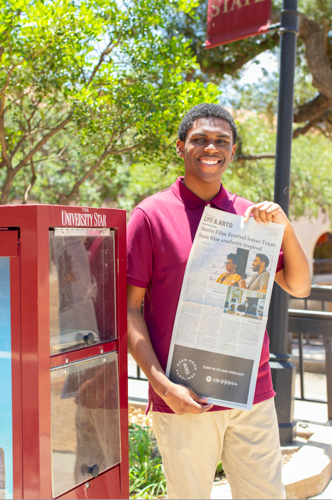 Kim Davis Jr. holds up a copy of The University Star at Old Main.

Editor’s Note: “-30-” has traditionally been used throughout journalism to indicate the end of a story. Each semester, The University Star encourages its graduating seniors to write a Senior 30 — a farewell piece to readers — indicating the conclusion of a journalist’s time as an active member of our organization.

Prior to joining The University Star my freshman year, I wanted to work at KTSW 89.9. However, I met The University Star’s first Black editor-in-chief, Carrington Tatum, at a mass communication career fair, and my time at Texas State began to significantly change for the better.

I began working at The University Star as a multimedia contributor in March of 2020. The COVID-19 pandemic caused a lot of uncertainty for the section and I wasn’t sure if The University Star was the right place for me. While Carrington believed in me, being around so many passionate journalists made me feel like I had made a mistake since I lacked that same passion for journalism.

However, in June of 2020, the multimedia editor at the time, Rebecca Harrell, pitched me the idea of starting my own podcast. I had experience making my own content and I had a lot of admiration for comedy podcasts and producers, so I thought “Hey, I could definitely do that.” Rebecca and I spent weeks going back-and-forth brainstorming on how we would create an original podcast series. Slowly but surely, the idea snowballed into the creation of a brand-new section that I was going to lead. I was excited to become the first podcast editor, but also utterly terrified. Many people had unsuccessfully tried to accomplish what my vision had been, but unlike them I had a support system to push me forward when I needed it most.

My time as the podcast editor was the most stressful period in my academic career. In my first semester in the position, I was in charge of booking guests, preparing questions, interviewing, editing and posting each episode while remaining on a strict weekly schedule in addition to my semester coursework. I severely underestimated how challenging it would be to run the section by myself. Every week after an episode was posted, I would feel relaxed for about 10 minutes, but that feeling would quickly go away and escalate to panic because finishing an episode just meant that I hadn’t started the next one. Although that period of time was challenging, I learned a lot of valuable communication skills and a deadline driven work ethic that translated to my classes and future work experiences. After my first semester, the Podcast section had grown into a small team and I’m incredibly proud of the work we were able to produce during my time as the podcast editor.

When I could no longer commit the time necessary to run the Podcast section, I stepped down as the podcast editor and transitioned to being a life & arts reporter and multimedia contributor. Being a part of those sections allowed me to attend the Moontower Comedy Festival, Austin Film Festival and SXSW. All of which were unforgettable experiences that fueled my desire to enter the entertainment industry.

Without The University Star, my college experience would have been significantly less rewarding. I would not have made lifelong friends, gotten various internships, and met mentors who have helped me in my career. I’m grateful I had the opportunity to build a section within this organization and given a chance by those who trusted me. Thank you, The University Star, and thank you to everyone who helped me become a better version of myself.

Blues on the Green: Photo Essay

For over 30 years the City of Austin has welcomed the tradition of Blues on the Green. Produ… Read more