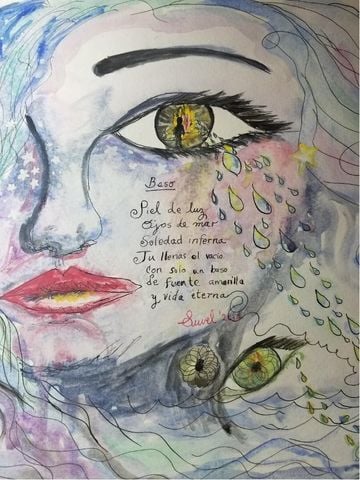 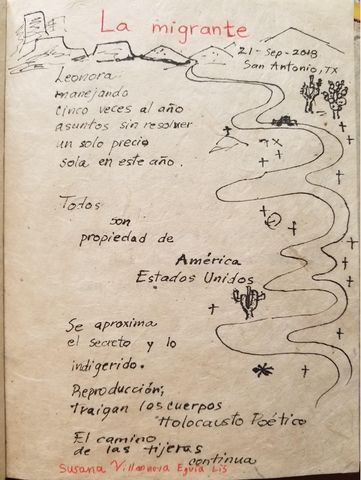 Dr. Susana Villanueva-Eguia Lis' poem 'La Migrante' on ink. Villanueva-Eguia Lis is a senior lecturer in the Department of World Languages and Literatures who recently published her poems in the book 'Texas, La Experiencia Bilingue' by Universidad Autónoma de México (UNAM) and in the '2020 Latino Book Review'. 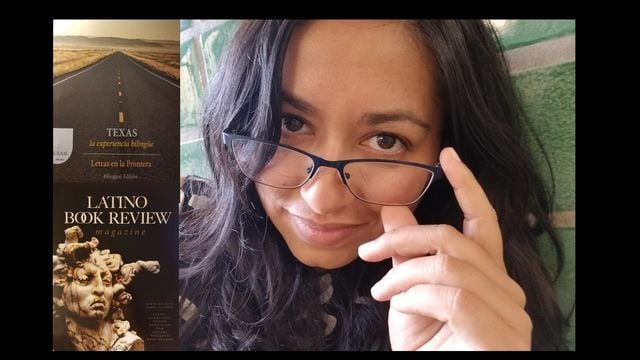 Dr. Susana Villanueva-Eguia Lis poses for a selfie. Villanueva Eguia-Lis is a senior lecturer in the Department of World Languages and Literatures and is internationally recognized for her poetry.

When Dr. Susana Villanueva-Eguia Lis left her home in Mexico 20 years ago to study abroad in the U.S., she was not expecting to walk into a melting pot she would call home one day, nor a place where she would become an internationally-recognized Spanish poet.

Getting to the U.S. was a pleasant surprise for Villanueva-Eguia Lis, who arrived only speaking Spanish, her native language.

“I didn’t even speak English," Villanueva-Eguia Lis said. "I understood like 5-10% of what people were saying. I mostly just looked at facial expressions and clothes because that’s what I could understand."

Villanueva-Eguia Lis is a senior Spanish lecturer at Texas State in the Department of World Languages and Literatures. She recently published her poems 'Hablando' and 'Nahual' in the book 'Texas, La Experiencia Bilingue' by Universidad Autónoma de México (UNAM).

Additionally, translations of her poems 'Ars poetica' and 'Impuesto inmigante' were featured in the '2020 Latino Book Review', a magazine that features poetry, visual arts, book reviews and scholarly work from authors and artists in the U.S., Mexico, Puerto Rico, Colombia, Chile, the Dominican Republic, Argentina and the U.K.

Villanueva-Eguia Lis originally came to the U.S. to learn English, however, her study abroad experience led her elsewhere. She returned to Mexico to become an English teacher and later decided to become a language teacher in the U.S. after earning a master's degree to teach Spanish.

After moving to the U.S., Villanueva-Eguia Lis stumbled upon the opportunity to write poetry, a craft she was passionate about since she was a child. The poetry and storytelling she worked on behind the scenes resulted in her becoming an internationally-recognized poet.

"I started picking up writing poetry more seriously and trying to publish it when some friends were starting to ask me about my poetry,” Villanueva-Eguia Lis said.

For Villanueva-Eguia Lis, sharing her poems was not always the easiest thing to do. She says she would write her poems, read them to a few close friends and then destroy them.

“I went with my friend to a poetry show, and the professor that was teaching started talking about what we do with our finished poetry, and I told him I just destroy mine," Villanueva-Eguia Lis said. "I felt like my writing was very private."

Villanueva-Eguia Lis began saving her works in a shoebox after the professor suggested it instead of destroying her art. This method pushed her to want to get her poems published.

Dr. Lucy Harney, department chair of World Languages and Literatures, says she has always encouraged Villanueva-Eguia Lis to share her writing with others.

Villanueva-Eguia Lis used her experiences from when she first came to the U.S. and shared those with some of her former students to encourage them to write too.

Texas State alumna Bianca Patlan, who graduated with a degree in English education in May, says she was heavily influenced to write more poetry after spending time with Villanueva-Eguia Lis during her office hours.

"I would visit her office hours, and we would talk about poetry like there was no tomorrow, and she showed me her poems that were in Spanish, and she would explain them to me, because of the language barrier, and she has inspired me to keep pursuing poetry," Patlan said.

Patlan is a Latinx poetry writer who is not bilingual but, with the help of Villanueva-Eguia Lis, has made attempts to learn how to write and read Spanish poetry.

"My parents tried to teach me Spanish, but it just never stuck with me. That is one of the challenges I face is that I don't speak Spanish, so to have some relation to Spanish poets or even Dr. Lis who has [shown] me her Spanish poems can be difficult," Paltan said.

When her works got published, Villanueva-Eguia Lis was recognized as one of the newest female Latina poets in the Texas-Mexico borderlands and was invited to read her original work in Austin and San Antonio, as well as internationally in Mexico and Panama.

Villanueva-Eguia Lis says one of the reasons she is committed to writing poetry is to act as a witness of history.

"Witnessing current events and recording them for the future is a big motivation for me to write and to publish," Villanueva-Eguia Lis said. "I am delighted that people like it."

Villanueva-Eguia Lis encourages anyone who has the urge to explore any kind of writing to do so.

"We are made of divine energy, and you can use it. You don’t have to be a famous person, or you don’t need permission from someone to be who you are," Villanueva-Eguia Lis said. "You can just be who you are. You can express yourself because you have feelings and you’re human. It is not something that has to be approved."

For more information about Dr. Susana Villanueva-Eguia Lis and her work, visit her website.

Opinion: The university community should not fear COVID-19 vaccine

There has been speculation about the efficacy of a COVID-19 vaccine due to the speed of production within the last year. With hopes of a vaccine becoming available to the student body in the coming weeks, questions have surfaced regarding its reliability and safety.

After dedicating years of education to brain research and psychology, Dr. Carmen Westerberg, an associate psychology professor at Texas State, was awarded $300,000 to fund her upcoming study exploring the effects of sleep on memory retention and formation.

Health care workers have found themselves working to keep a pandemic under control while battling inclinations to get physically close to unwell patients — an action once a natural part of their identities but now a bigger threat to their personal safety.